Tiemoue Bakayoko switched off for a split-second, lost his man and Saul Niguez cast a very different complexion across Chelsea’s European campaign.

The Niguez header, early in the second half, cost Antonio Conte’s team top spot in Group C and could have lingering repercussions.

The Premier League champions managed to equalise when former Manchester City defender Stefan Savic deflected a low drive by Eden Hazard into his own net – and there were chances to win the game. 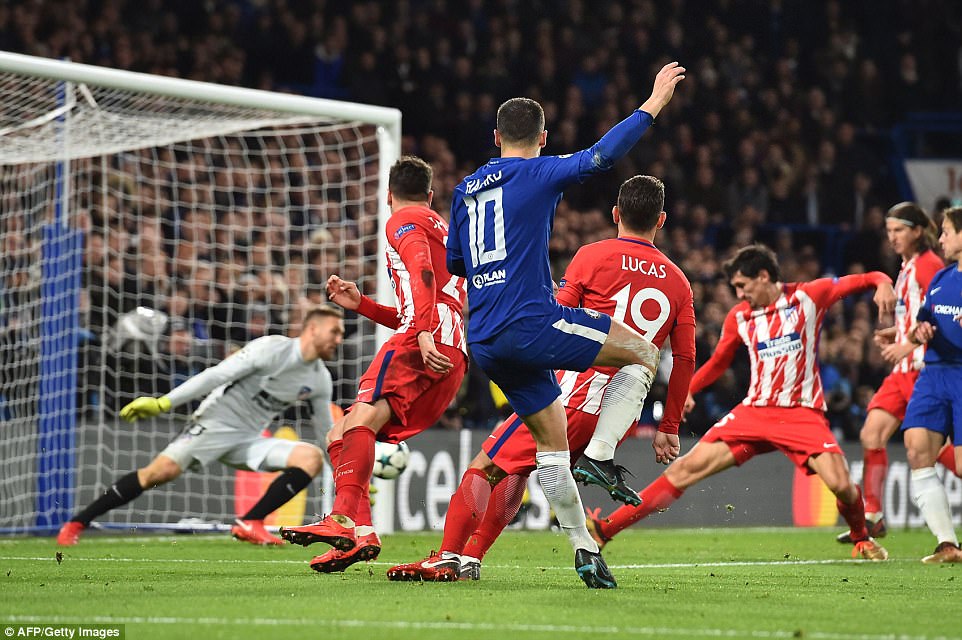 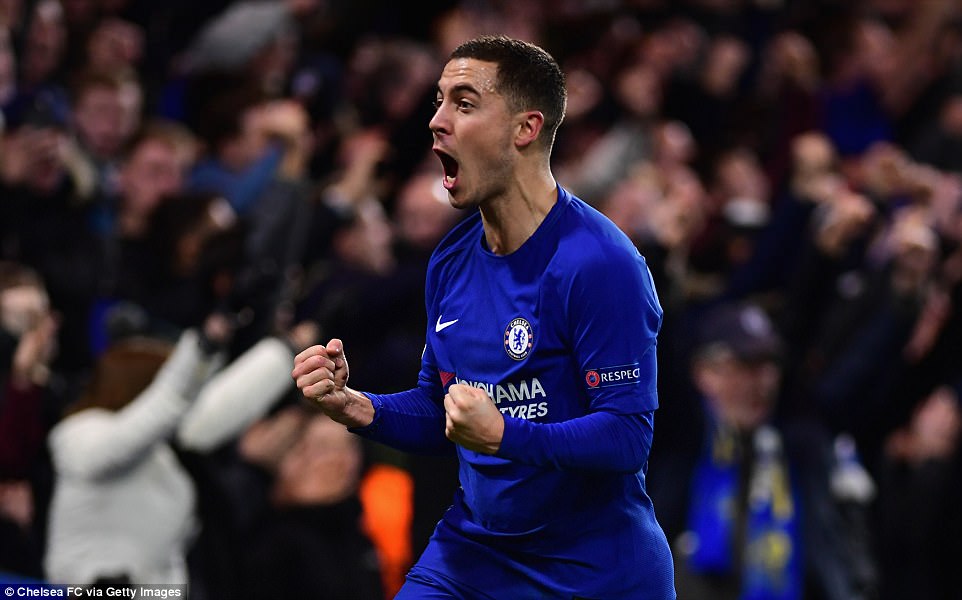 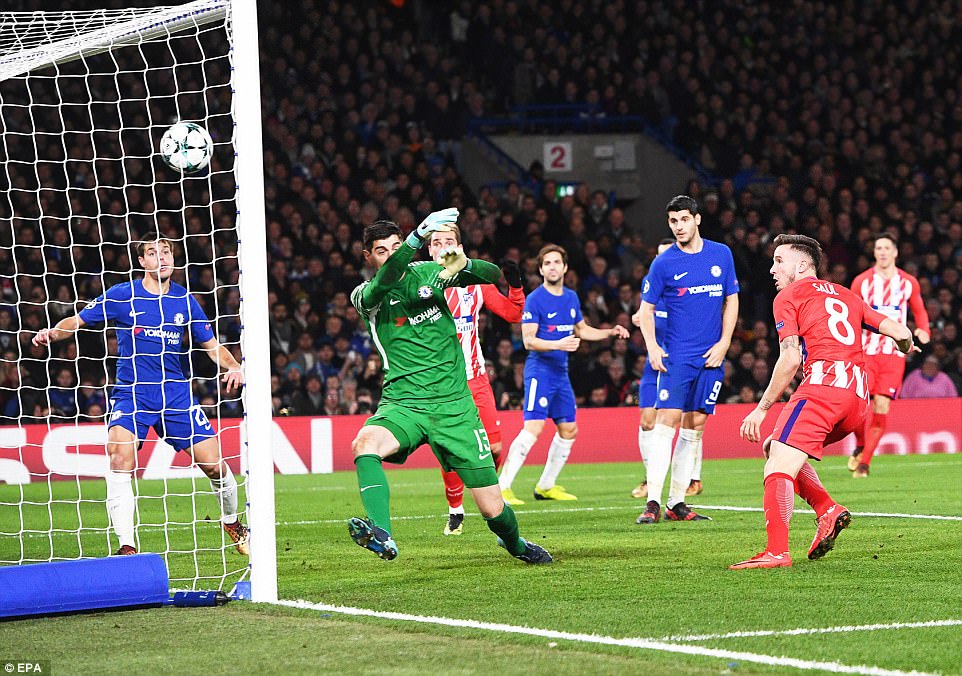 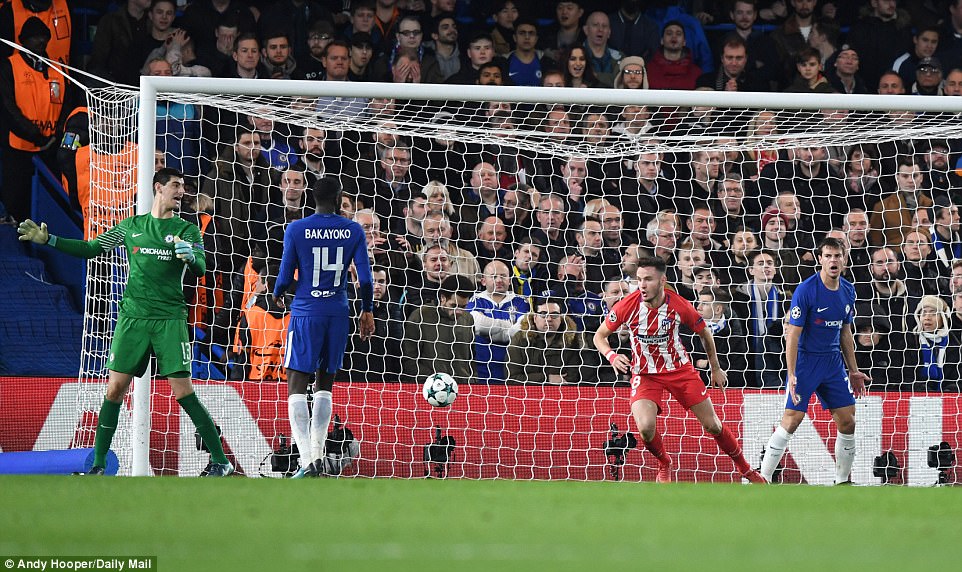 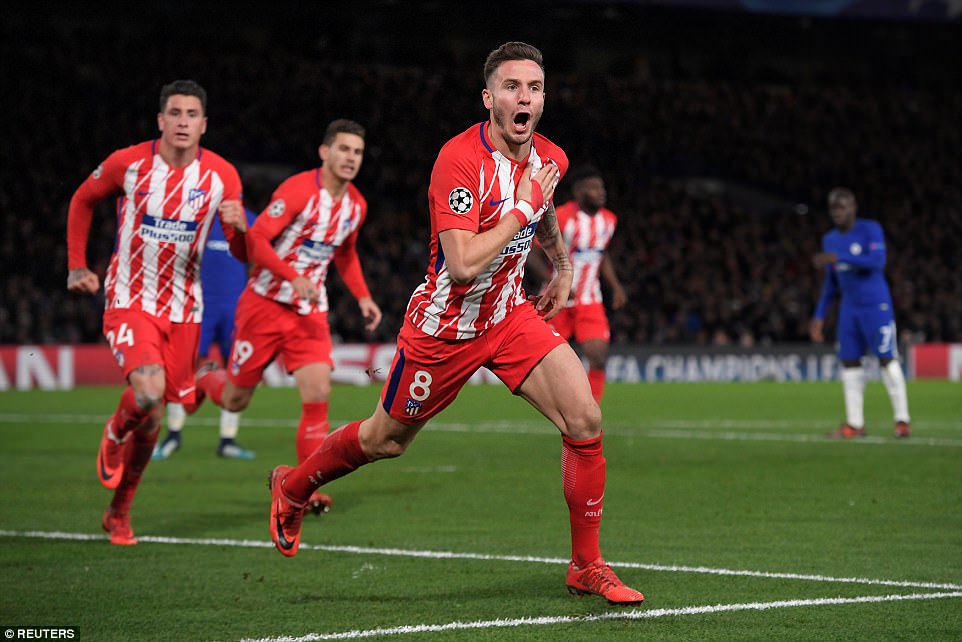 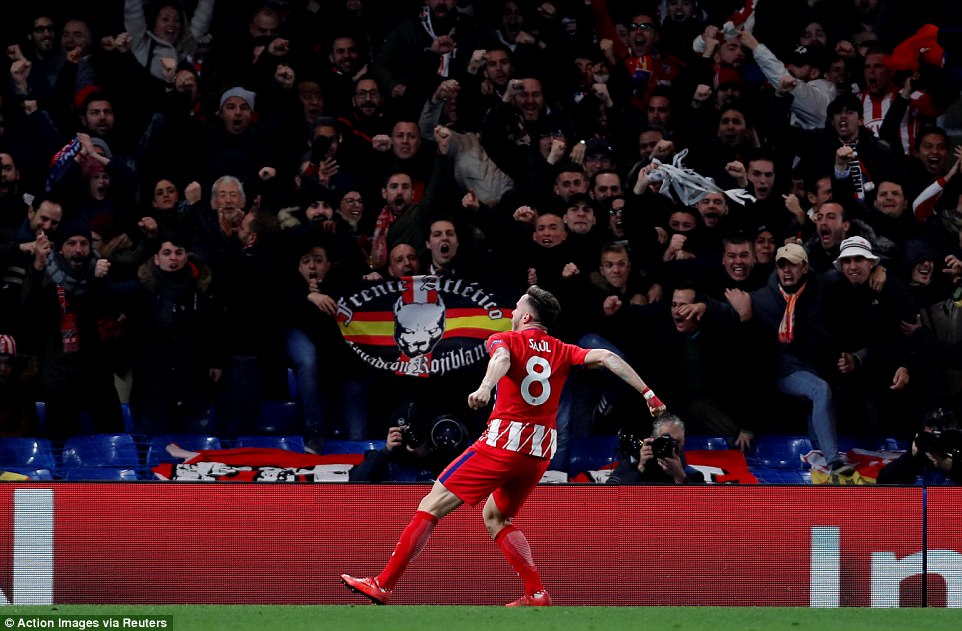 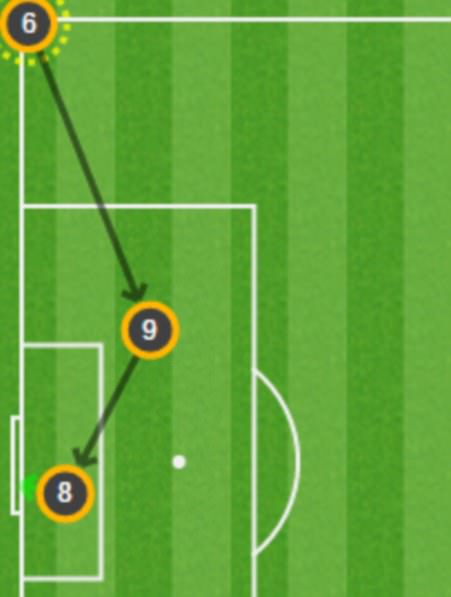 Atletico Madrid goalkeeper Jan Oblak produced a fine late save to thwart Alvaro Morata and WIllian sliced over when the goal was gaping.

Michy Batshuayi almost produced a stunning winner in the closing seconds and Hazard, inexplicably, drifted offside when he and Willian had the visitors stretched on another counter-attack.

So Bakayoko was not the sole culprit and yet his lapse in concentration will loom large at Monday’s draw in Switzerland.

Victory would have ensured Chelsea won in the group and the relative comfort of top-seeding when the ties are pulled out for the last-16. 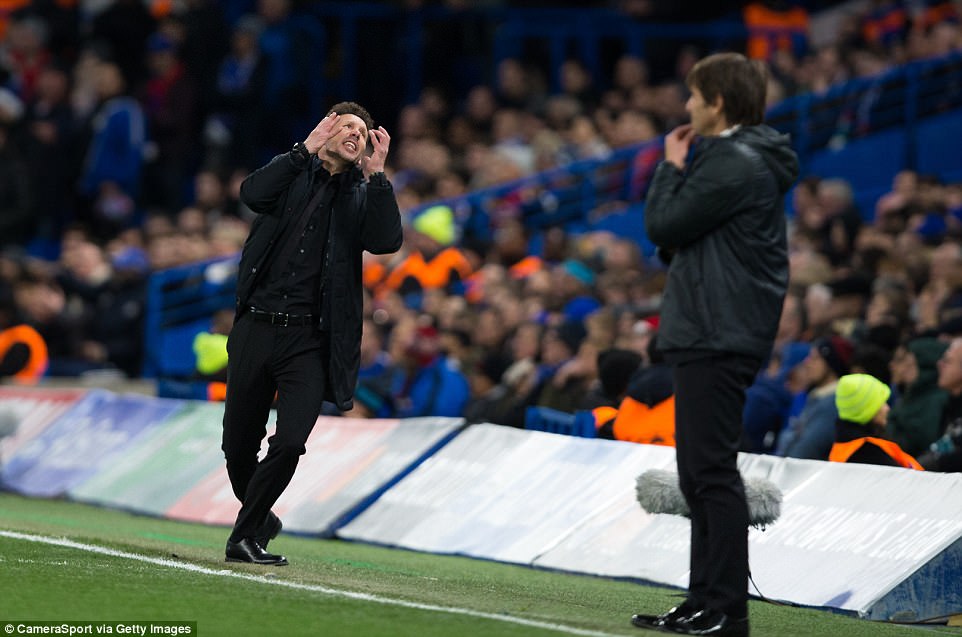 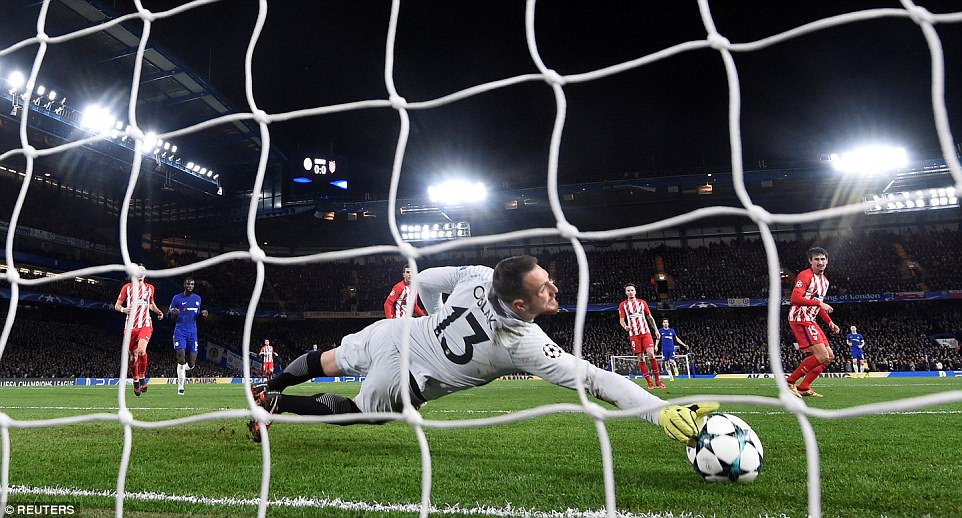 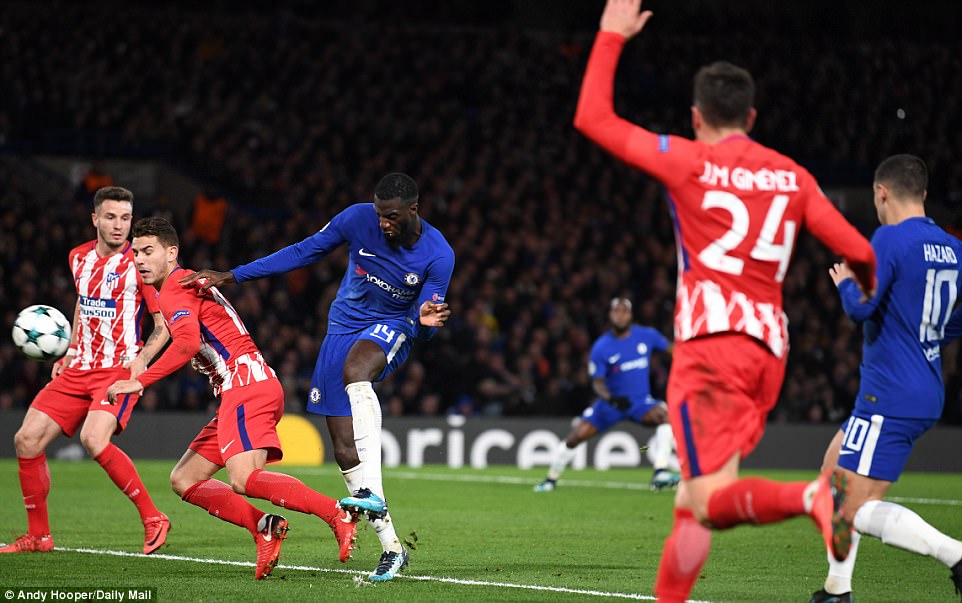 Sevilla/Spartak Moscow – depending on Liverpool’s result

Roma, who beat Qarabag in Italy, finish ahead of the Londoners by virtue of their head-to-head results.

Which means Chelsea will have only three options in the draw if all other English clubs win their groups.

These will include Paris Saint-Germain, Barcelona, Besiktas and possibly Sevilla, if they win Liverpool’s group.

Atletico go into the Europa League. They arrived knowing they would need a minor miracle to progress.

They were delayed by London traffic, were late to hand in the team line-up but they opened with purpose, determined, at least to try to fulfil their side of the bargain.

Fernando Torres, on his first return to Stamford Bridge, where he endured a difficult time in Chelsea blue unleashed the first shot of the game, which was deflected over. It must have been a familiar feeling. 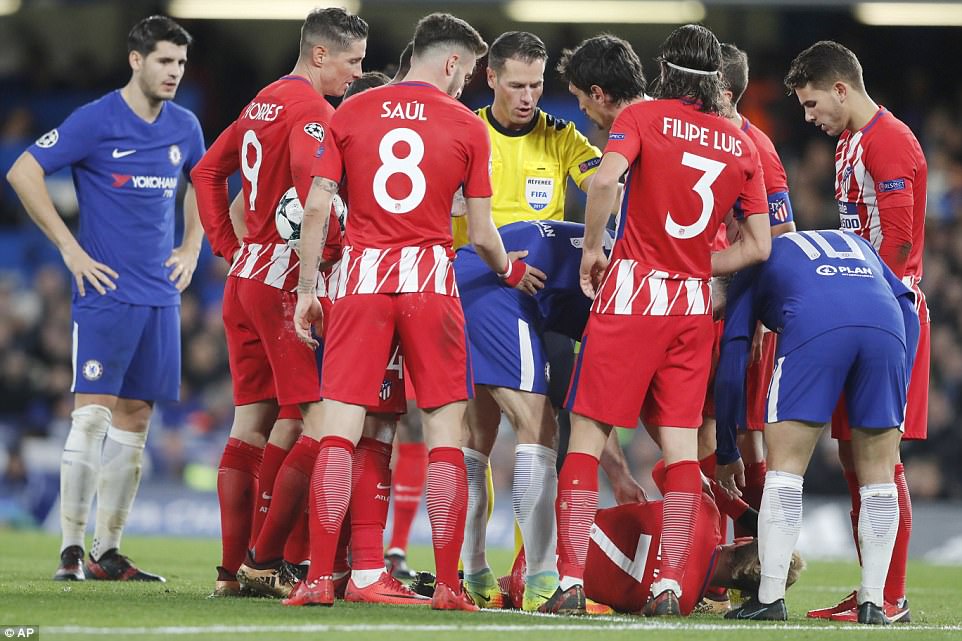 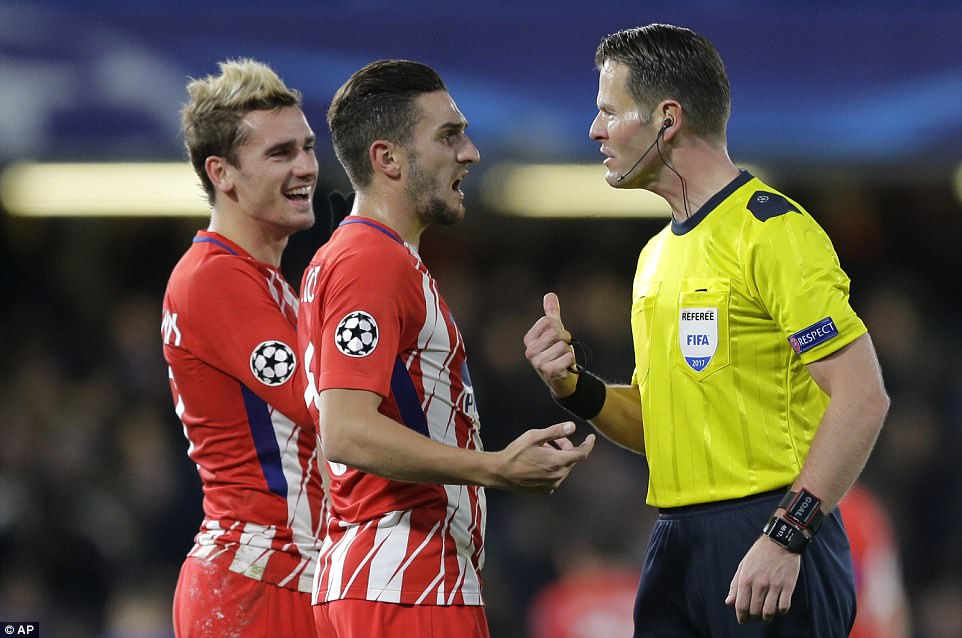 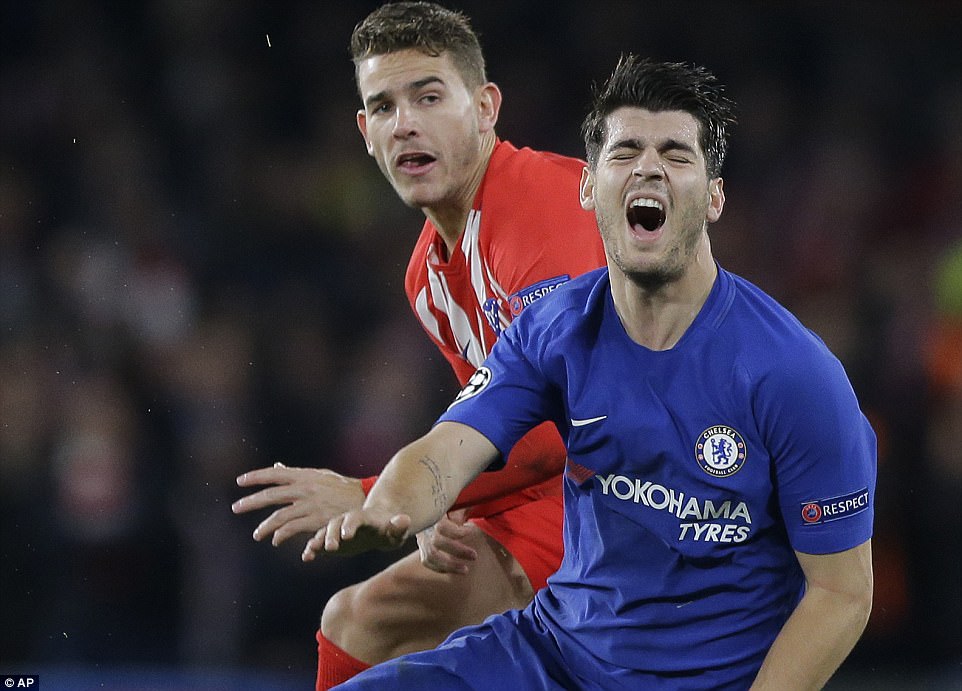 Torres refused to celebrate when he scored against Atletico at the Bridge in a Champions League semi-final in 2014, a tie eventually won by the Spaniards.

Left-back Filipe Luis was another Atletico player back on familiar turf but there was no sign of Diego Costa as he counts down the days until he can finally play again in January.

Atletico’s frantic intent set the pattern of the game although their situation filtered through to their football.

Simeone’s team committed numbers forward at speed but they often lacked composure around the penalty area and their passing was hurried and inaccurate.

Chelsea were content to draw the sting and threaten when they broke quickly out of defence with Morata the focal point. 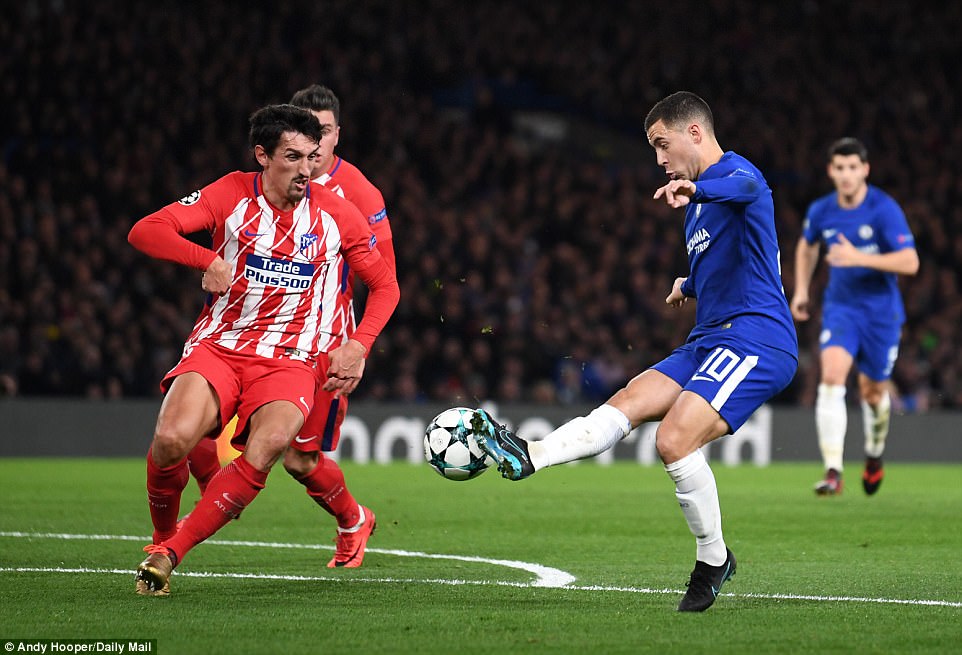 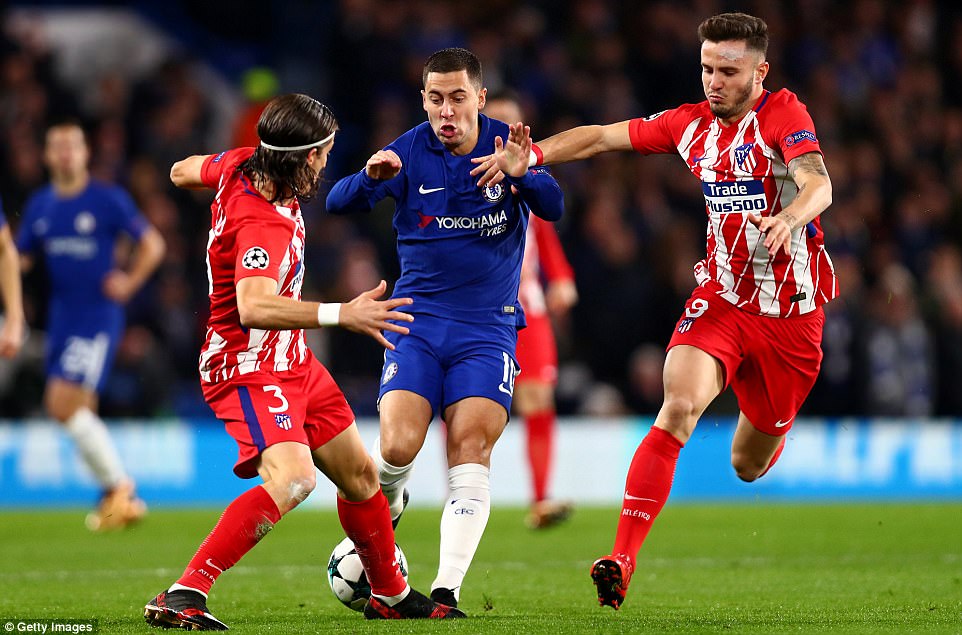 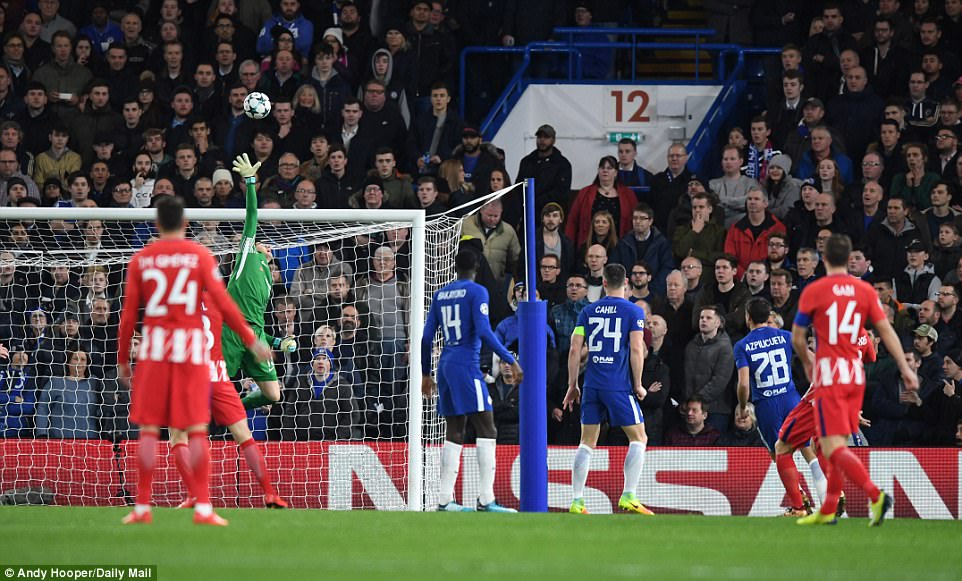 Morata spun and lashed one effort wide from 20 yards, tested Oblak with first-time shot from a low cross by Victor Moses and forced another save from the goalkeeper with a fierce cross-shot from the left.

Moses started at right wing-back with Davide Zappacosta switching to the left in order to give Marcos Alonso a breather.

Zappacosta, who scored on his Champions League debut against Qarabag in September, found his range again as he collected a pass from Cesc Fabregas and cut inside onto his right foot. Again Oblak saved.

Chelsea were into their best rhythm as the interval approached. Ngolo Kante was winning the ball in midfield, Fabregas was picking passes and Eden Hazard dribbled dangerously into the spaces Atletico left behind them.

Lucas Hernandez was booked for cutting down Hazard. Gary Cahill escaped with a warning despite accidentally volleying Antoine Griezmann as he was beaten to a bouncing ball on the edge of the Atletico penalty box. 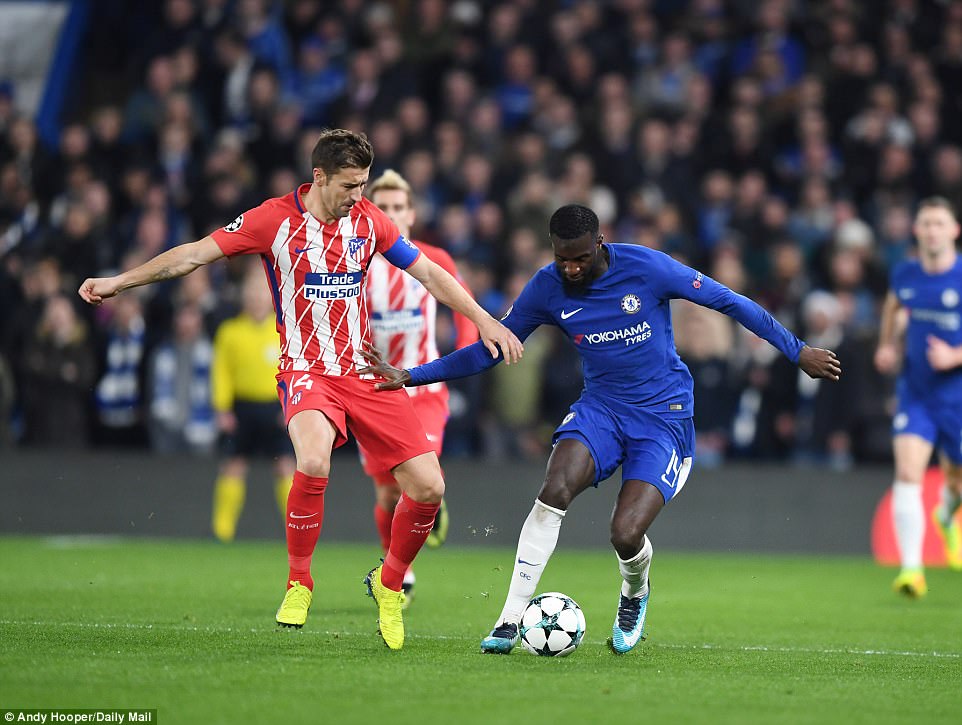 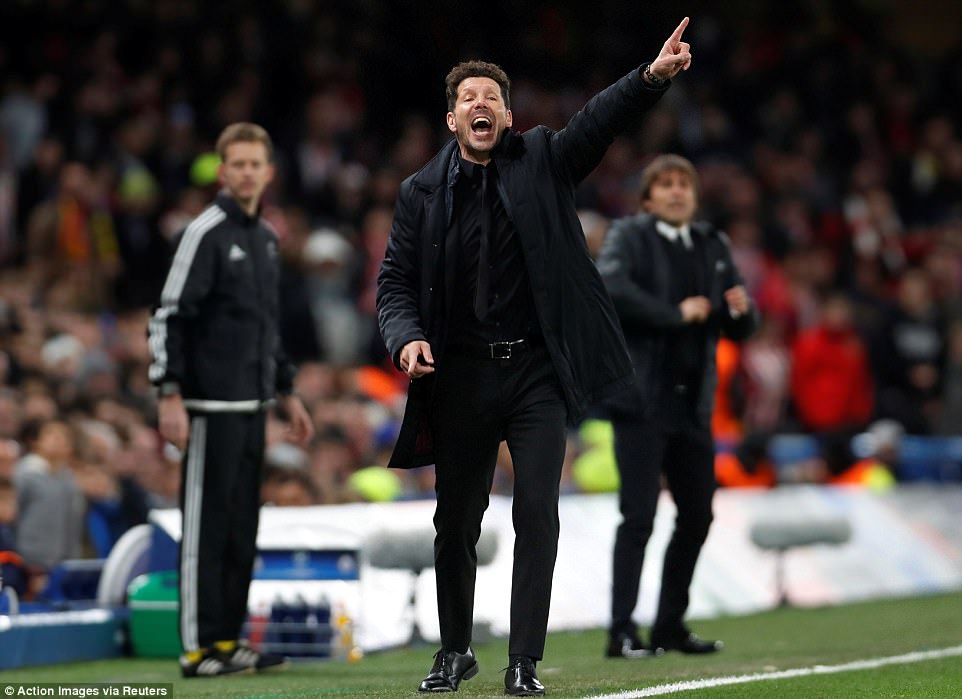 Griezmann was on floor again, in almost the same spot, early in the second half, although this time he was barely touched by Andreas Christensen.

Dutch referee Danny Makkelie thought it was foul, however, and Griezmann swerved the free-kick over the wall.

Thibaut Courtois made a routine save. At the other end, Oblak denied Christensen and Morata, again, and Hazard fired wide another wonderful jinking run which left a trail of bodies behind him.

Filipe Luis hit a post from 25 yards and Koke’s attempt to follow in the rebound with a diving header was gathered by Courtois.

But the Chelsea goalkeeper was beaten when Torres touched on a corner at the near post and Ninguez escaped Tiemoue Bakayoko all too easily to convert with a simple header at the back post.

It would be the final touch for Torres who received a warm applause from the home fans as replaced by Yannick Carrasco.

Conte threw on attacking players and Chelsea pulled level but there would be no winner and suddenly Monday’s draw seems a little more daunting. 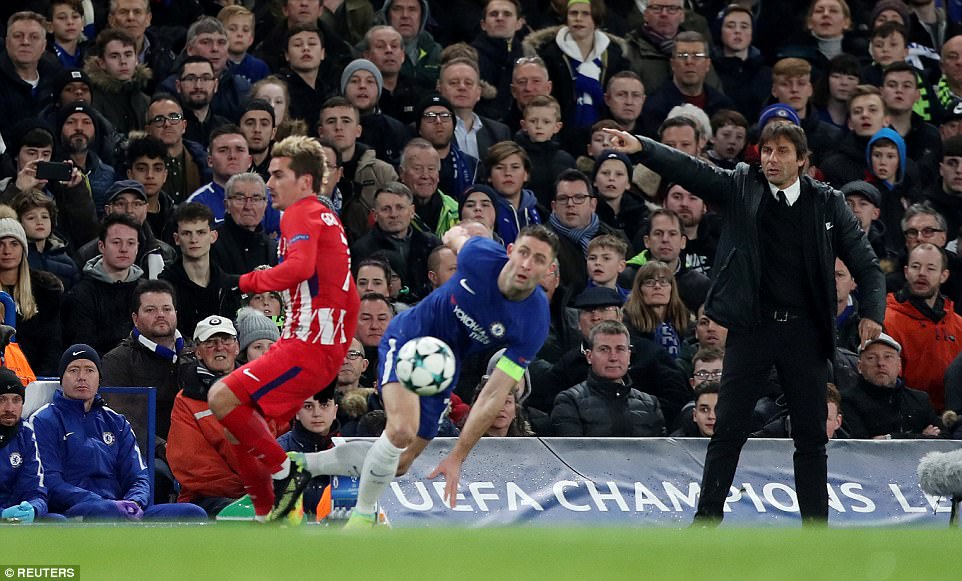 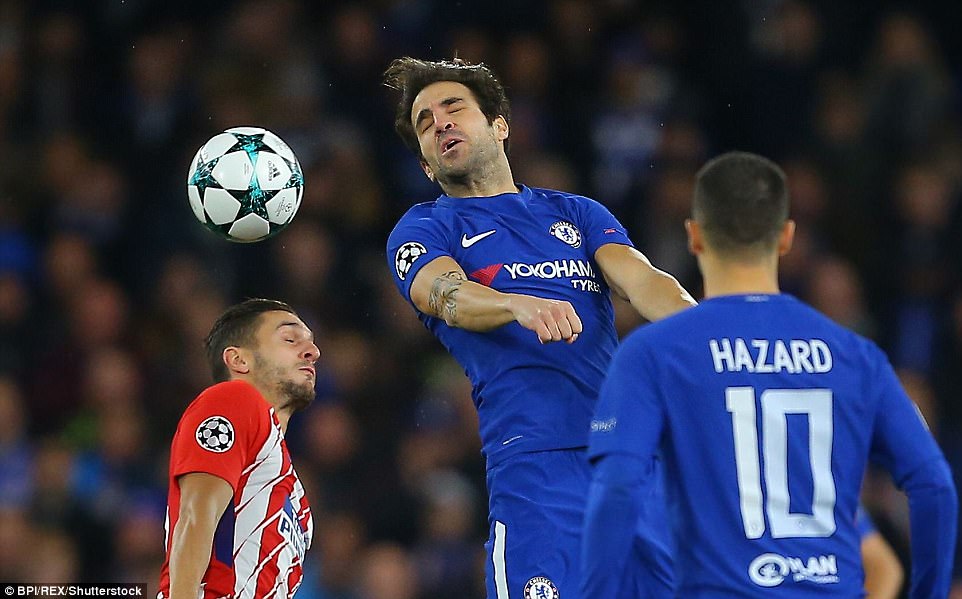 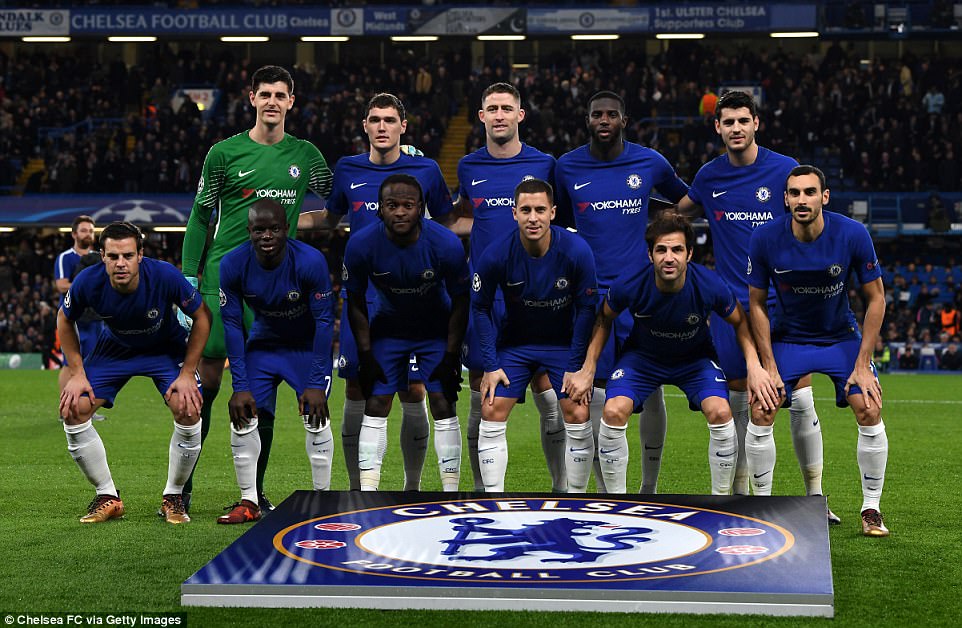 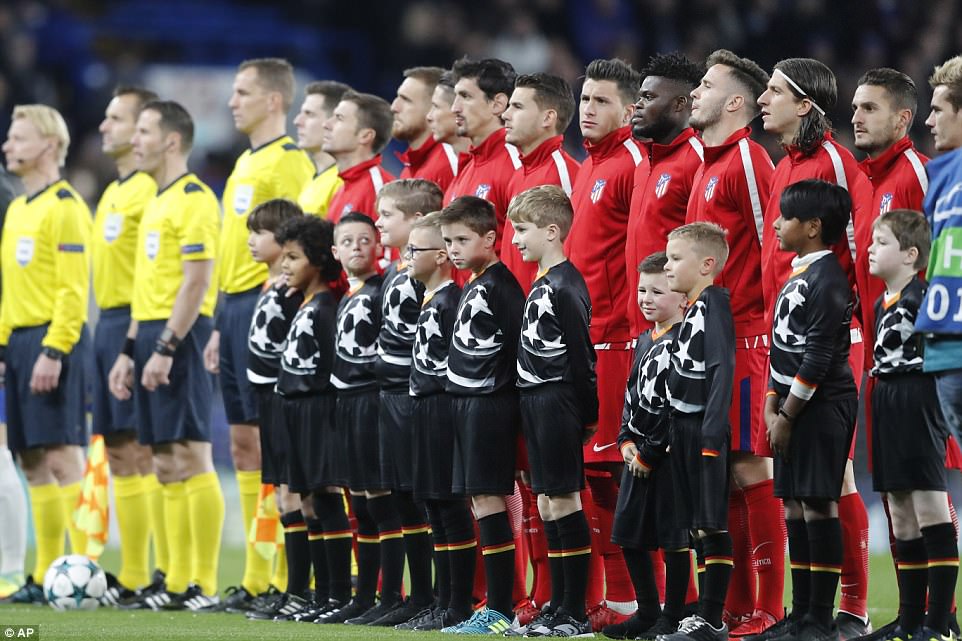 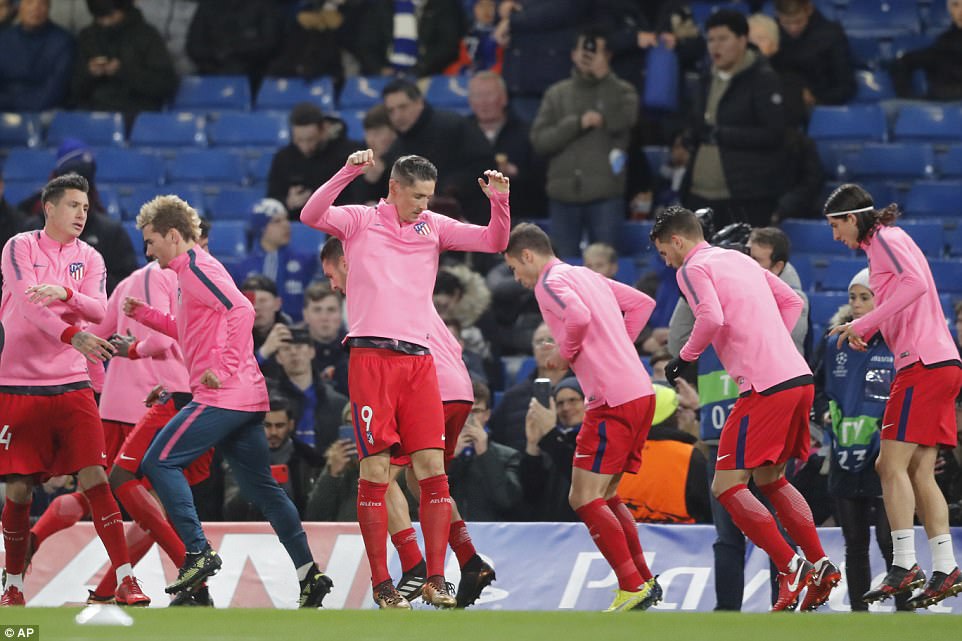