Lionel Messi finally found the back of the net against Chelsea in this his ninth appearance against them to hand Barcelona a slender but potentially crucial advantage at Stamford Bridge.

Chelsea had taken a deserved lead through Willian, who had hit both posts in the opening half before dispatching a third shot from outside the box into the net.

But their good work was undone when they gave the ball away in an advanced position and Messi was left with an easy finish. 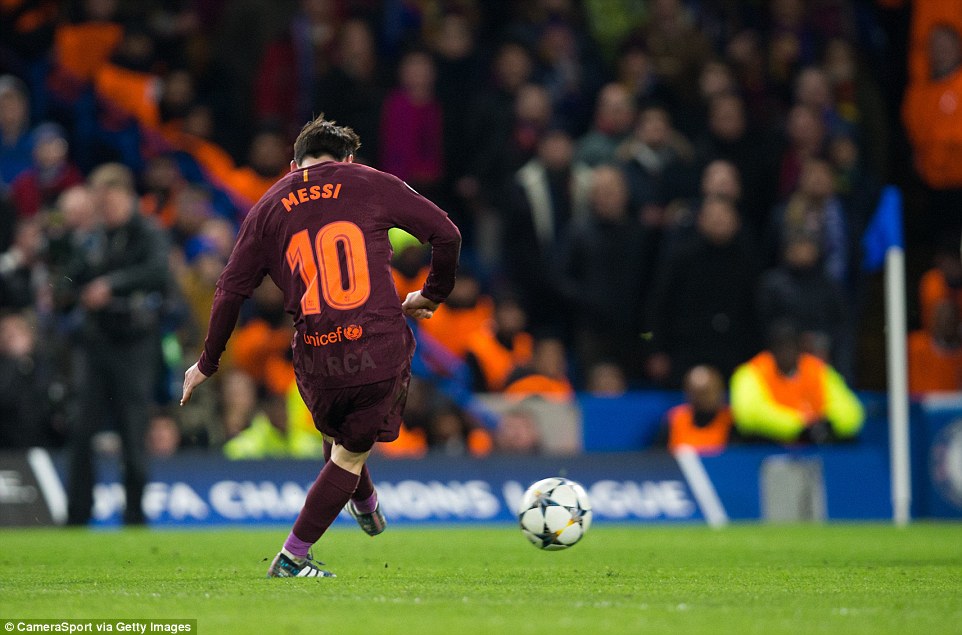 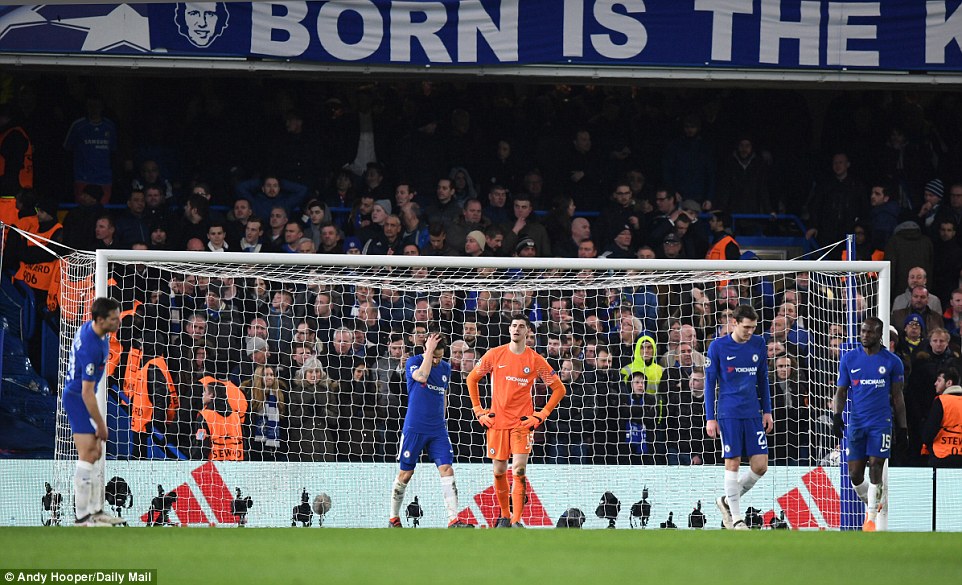 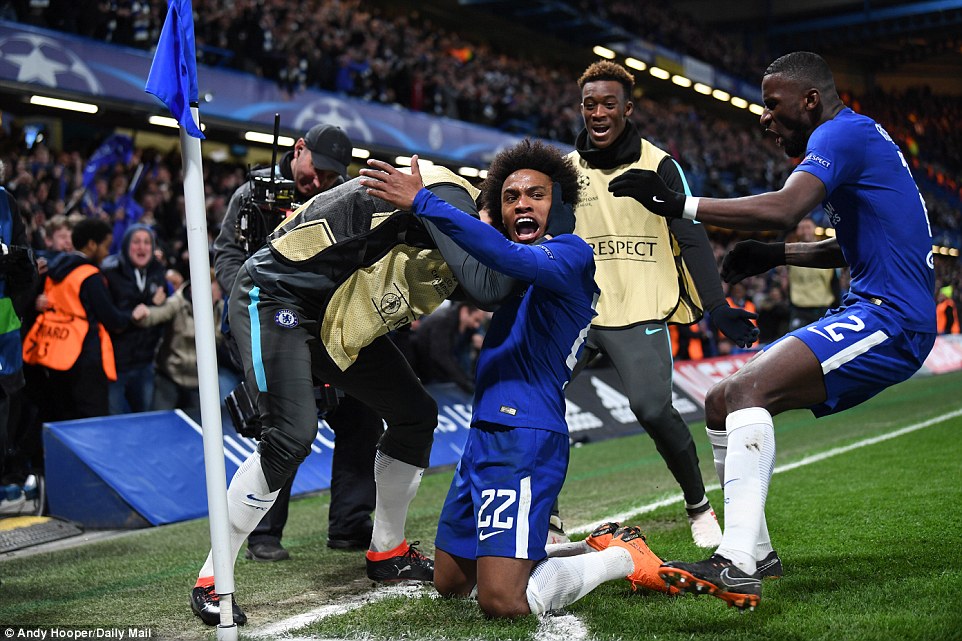 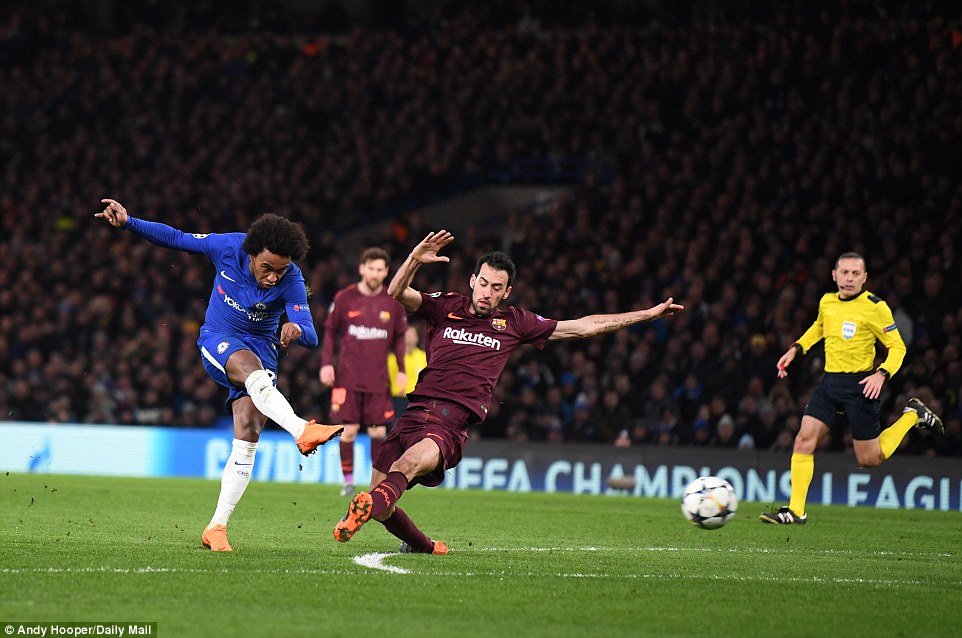 Lionel Messi scored his first-ever goal for Barcelona against Chelsea in his nine appearance, netting with his 30th shot against them. 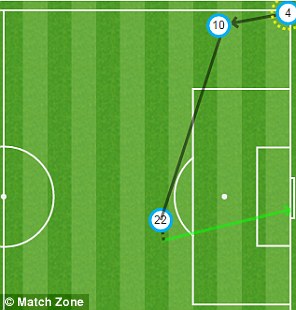 Willian strikes from outside the box to give Chelsea a one-goal lead. From more Match Zone statistics, click HERE

If there has been a theme this week it is that possession, in itself, can be a false indicator, and Chelsea duly played Wigan to Barcelona’s Manchester City for much of the first-half. With one difference. Chelsea actually had the most shots at goal, and the best two chances of the opening 45 minutes, Willian hitting both posts.

Yes, for long periods they may have been observers in their own stadium, as Barcelona hogged the ball – reaching 81 per cent possession at one stage – yes they may have misplaced passes and then been forced to watch Barcelona control the play for minutes on end, and yes, N’Golo Kante may have mustered two touches and one tackle in the opening 29 minutes, but Chelsea could have led at the midway point, and by more than one.

It is immensely energy sapping trying to contain Barcelona’s brilliance, but Chelsea did so for the first period of the game. Luis Suarez wasn’t in it, Lionel Messi as mesmerising as ever yet his influence limited. Of course, his intelligence is always apparent, his wit, his will, his genius ability to conjure a chance from nowhere.

Sadly for Barcelona, his best moment, a chip targeted a perfectly as a Jordan Spieth short wedge, fell to Paulinho who appeared to have his Tottenham head on. Using it, he steered the ball well wide of the target.

Chelsea then had the best of it early on, the lengthy exercises of keep ball aside. Antonio Conte gambled by playing Eden Hazard through the middle upfront, a ploy that has not always worked against considerably inferior opposition in the Premier League this season.

On this occasion, however, it paid dividends. Ably supported by the outstanding Willian, Hazard matched Messi in the battle of the tens many had predicted would decide this game. He found space, he teased Barcelona’s defensive midfield and, on occasions, terrified their full-backs. 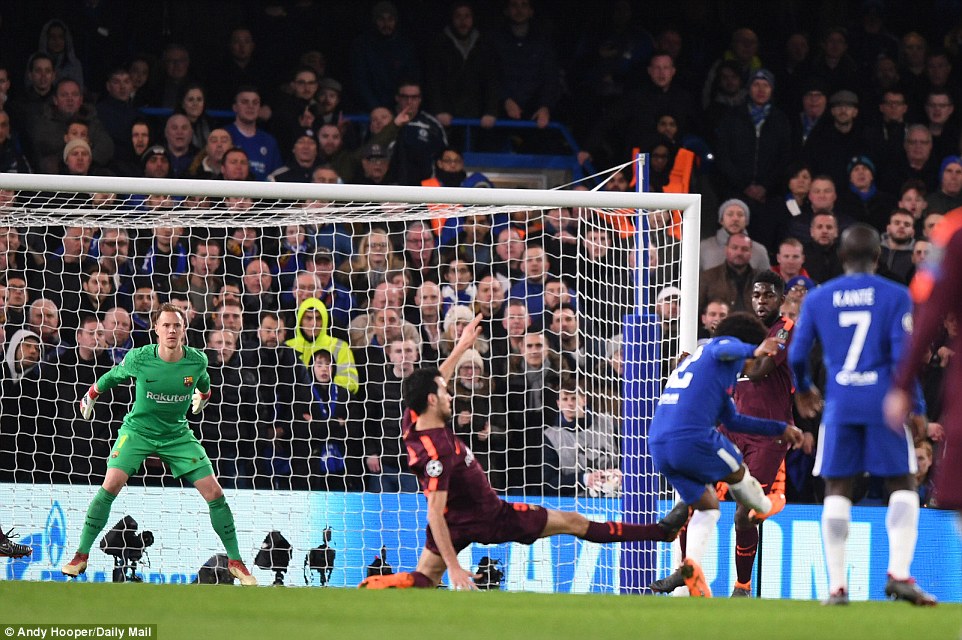 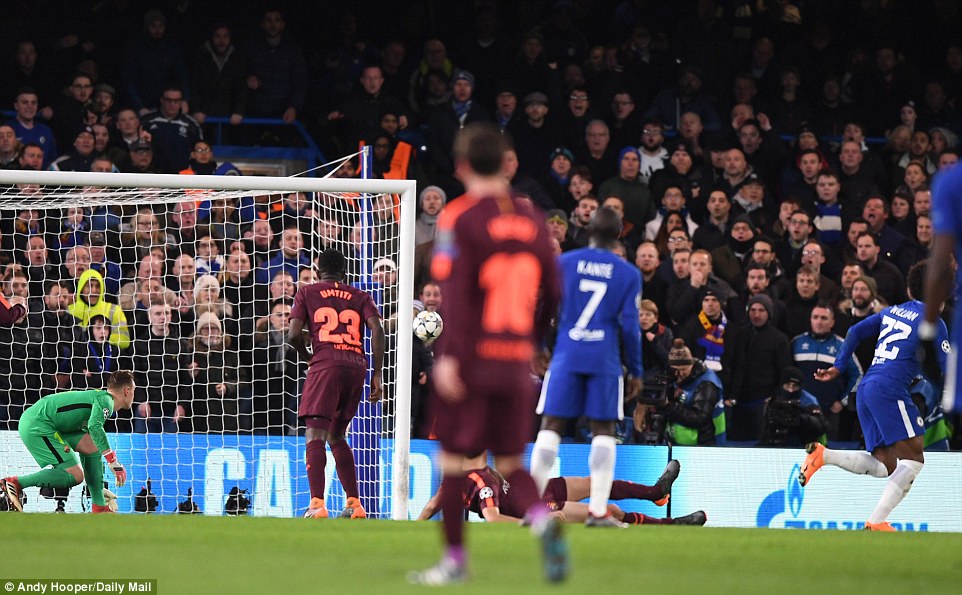 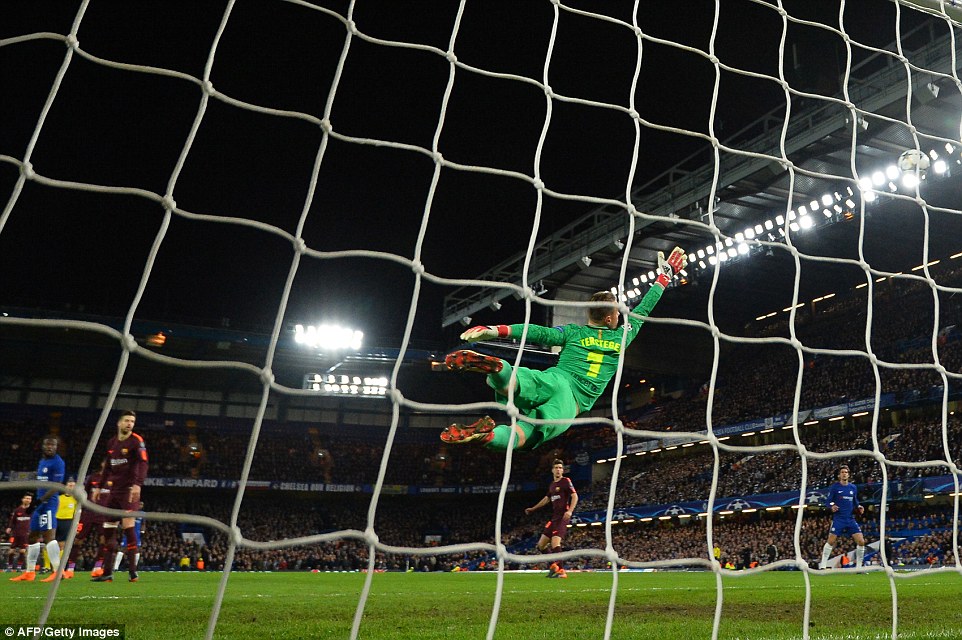 Ter Stegen dives to his right in an attempt to save a shot from Willian, but is spared when it bounces off his goalpost 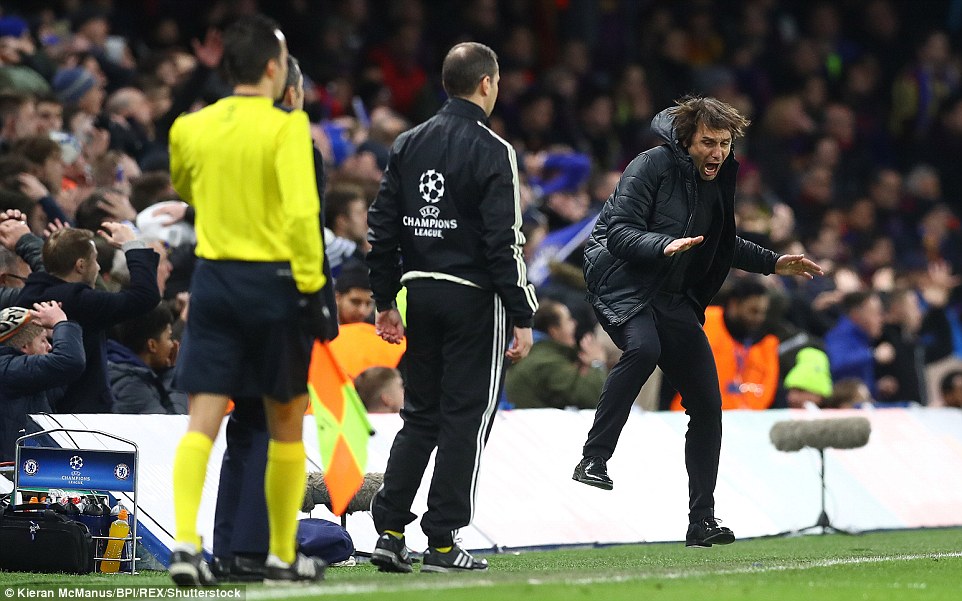 Willian, meanwhile, tested Marc-Andre ter Stegen in goal with shots from range that were twice defied by the posts. It was a far better display than many expected – most of the home fans fearing the worst given just four wins in the last 12 matches.

Chelsea put their mark on the game early, just five minutes gone when Hazard cut inside and tried his luck with a shot that travelled over the bar. Within four minutes, they had won a corner and Willian picked out Antonio Rudiger, who perhaps should have done better, steering his header wide.

For all the talk of Barcelona’s beautiful game, like Brazil, they know how to assassinate, too, and Jordi Alba was lucky to avoid a yellow card for a body check on Willian that thwarted a fine run with cold intent. When Ivan Rakitic did something similar after 30 minutes, tripping him crudely on the run, Turkish referee Cuneyt Cakir had no option but to produce a card. From the resulting free-kick Marcos Alonso forced a good save from ter Stegen, diving to his left.

There followed a short minute period that could have seen Chelsea go two clear – Willian at the heart of it on both occasions. In the 33rd minute, Hazard fed Willian who cut inside, drifting past Sergio Busquets before unleashing a shot of such venom, ter Stegen could only look on helplessly. It his left post and rebounded out, fortunately to Barcelona’s advantage, and the danger passed.

Seven minutes later, pretty much the same again. Willian once more, on the opposite side of the penalty, striking ter Stegen’s right post with a shot from outside the area. At least the Barcelona goalkeeper had time to dive this time.

Nor did the pressure abate as, three minutes before half-time, Chelsea floated a free-kick in, only half cleared by Barcelona’s back line. The ball fell to Hazard on the volley on the edge of the area, his shot considerably closer to the target as was first imagined as it disappeared over the bar. 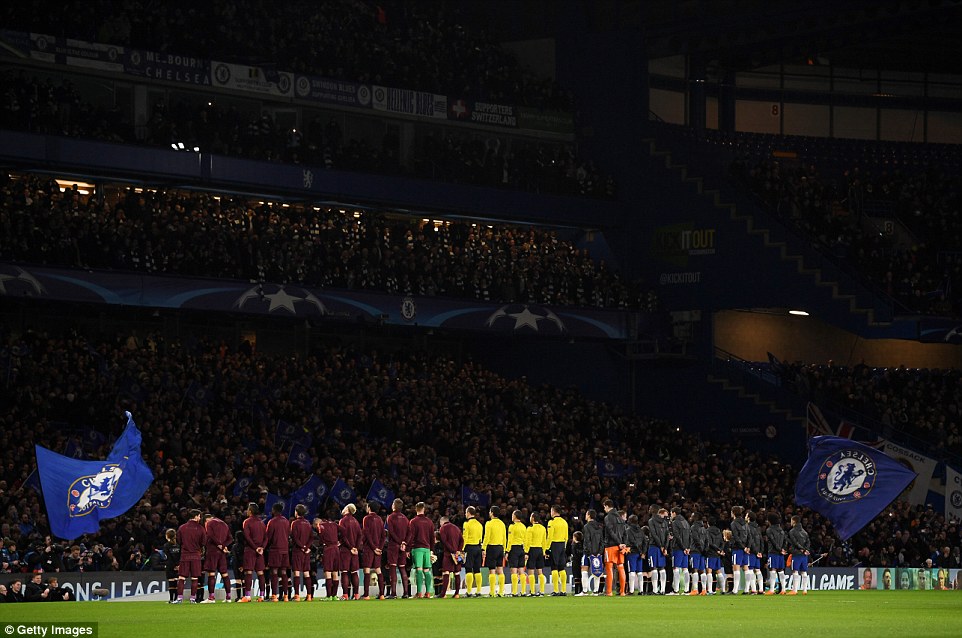 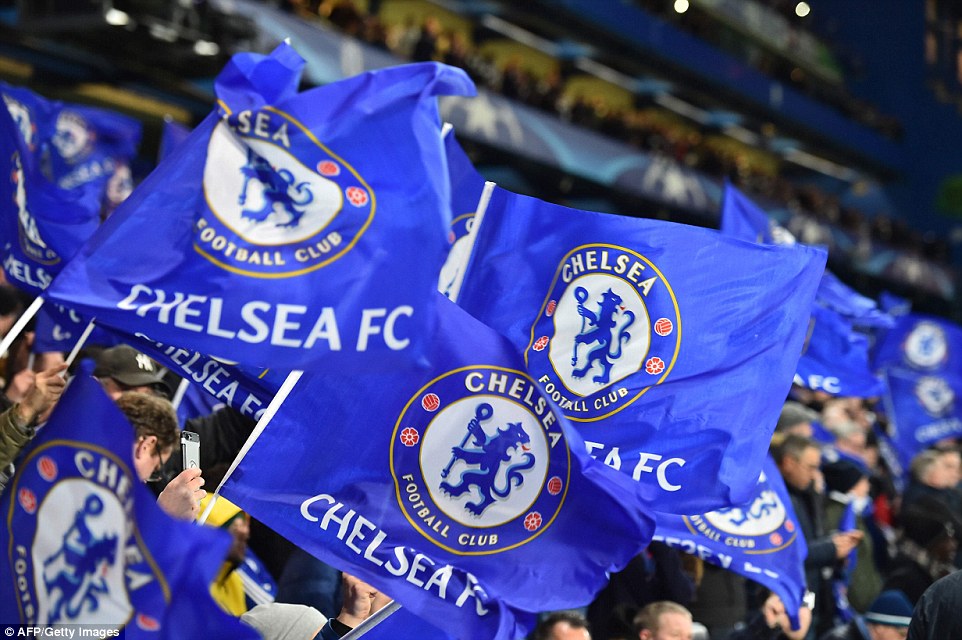 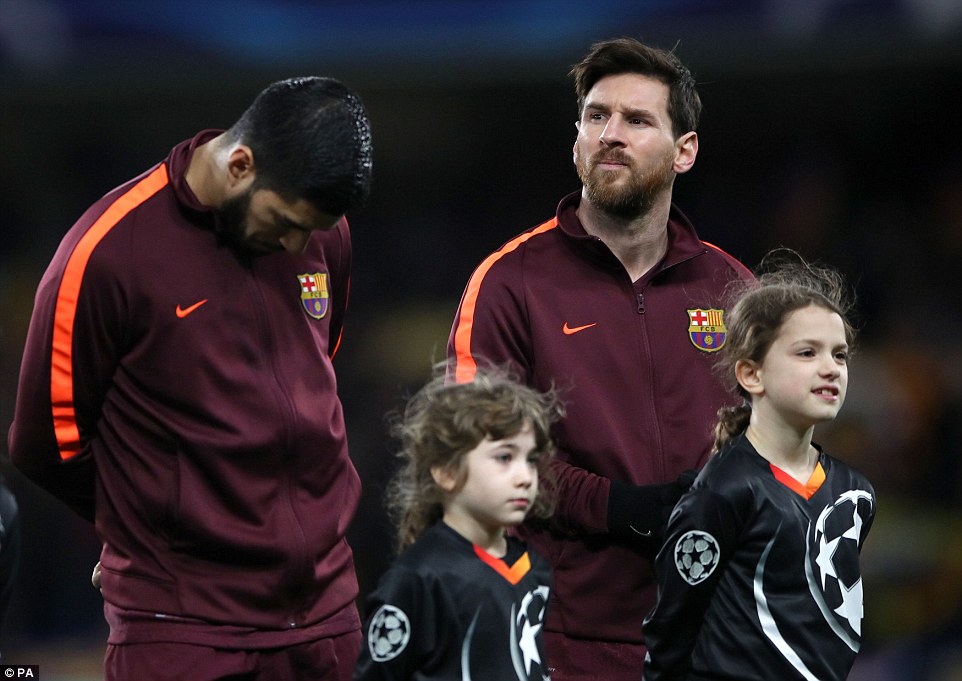 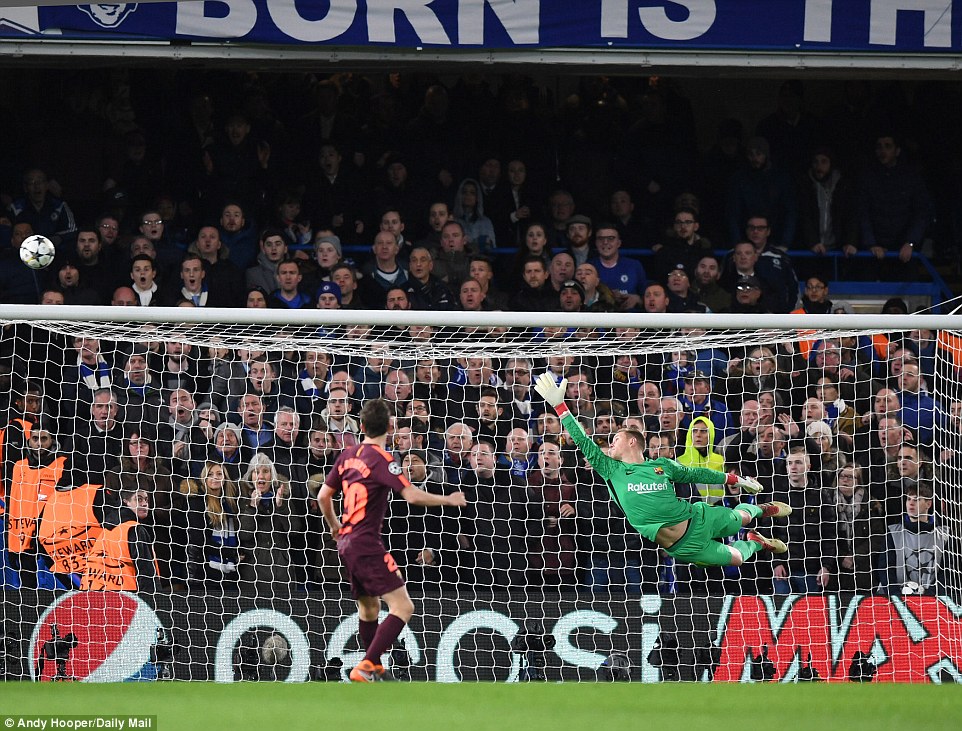 Barcelona goalkeeper Marc-Andre Ter Stegen dives to stop a shot from Chelsea’s Eden Hazard, but the ball goes just over 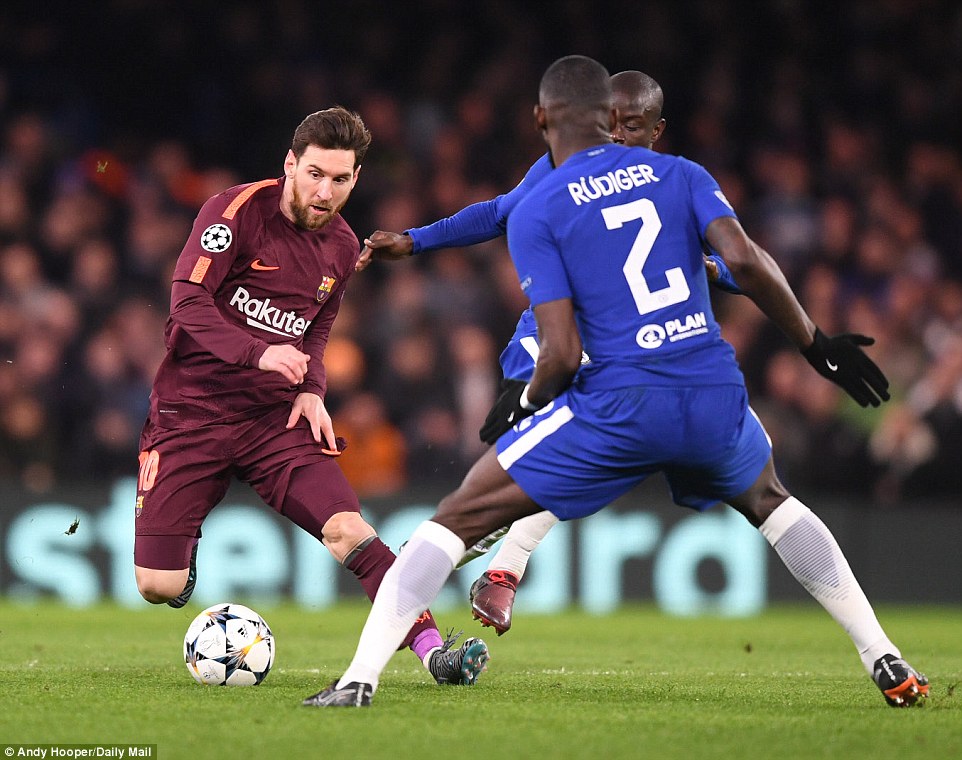 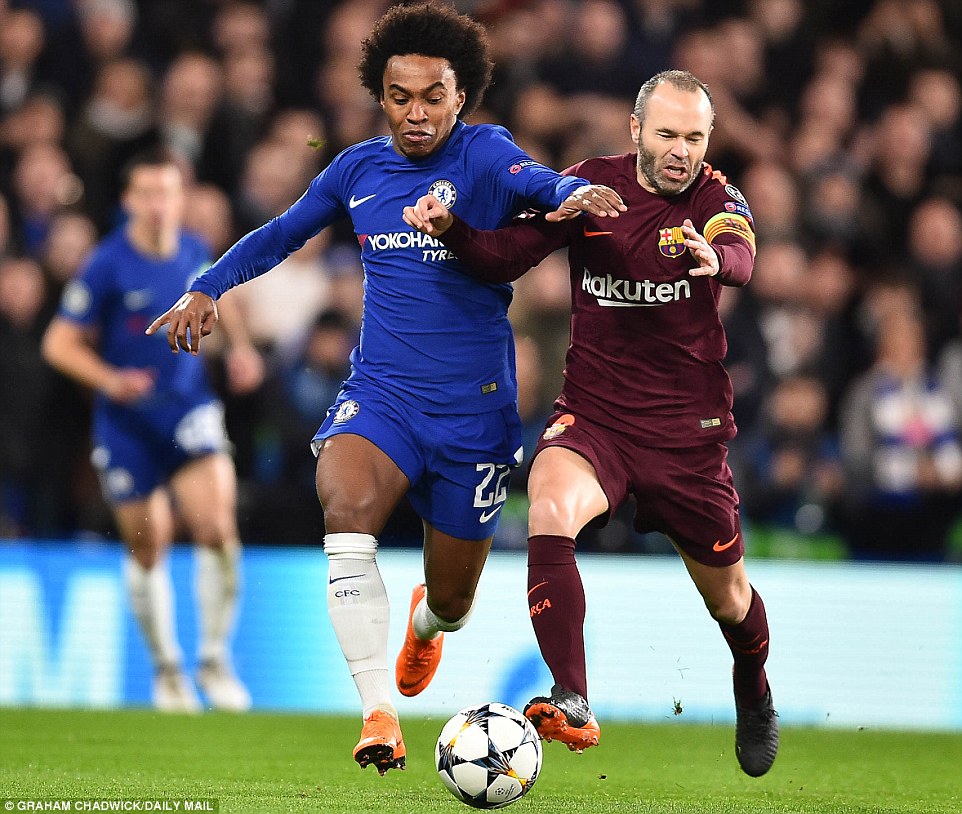 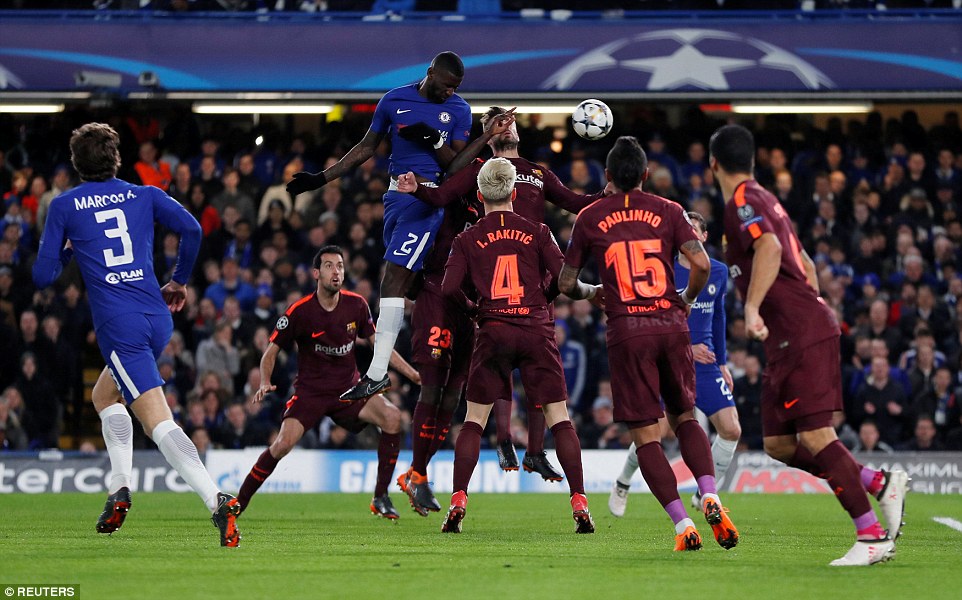 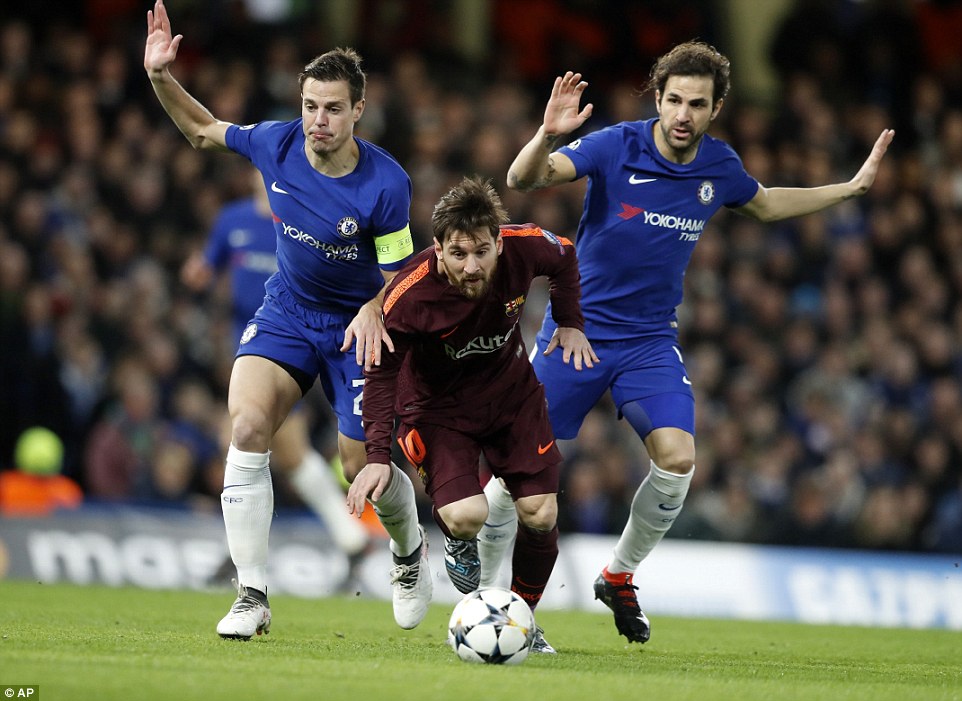 Messi chips a cross into the Chelsea box and finds Brazilian midfielder Paulinho, who is unmarked at the far post 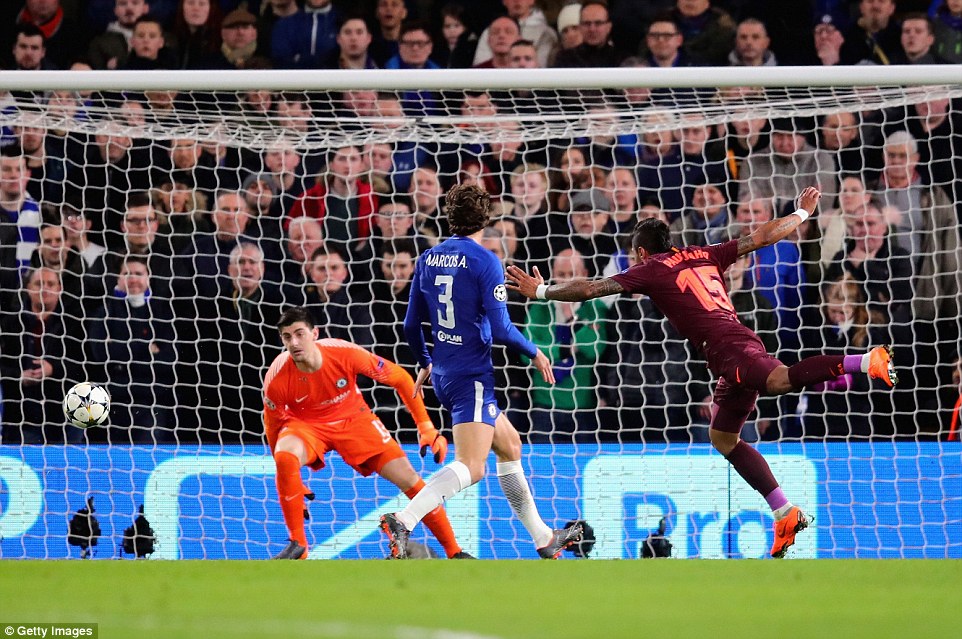 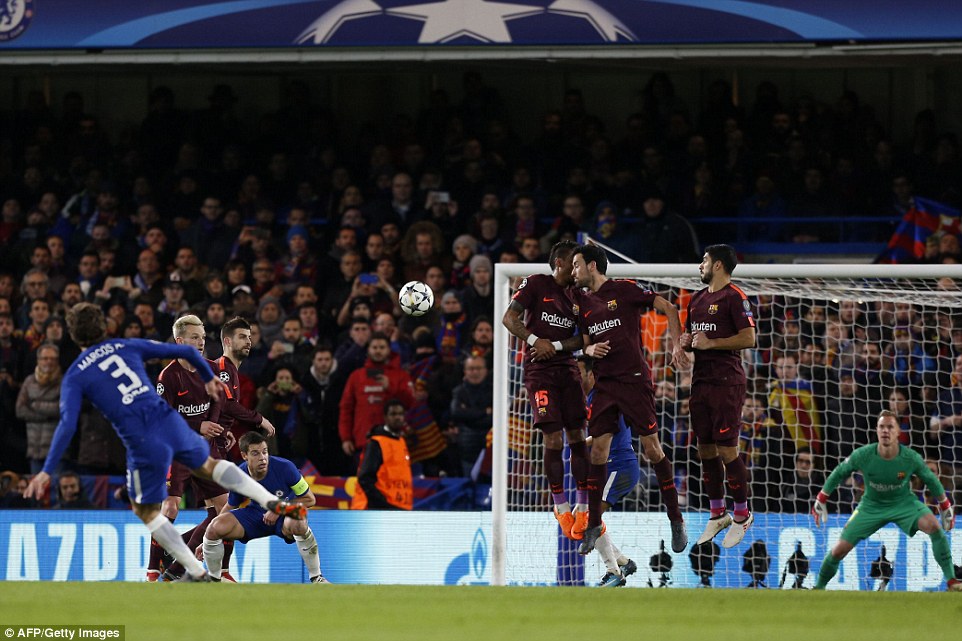 Chelsea defender Marcos Alonso attempts to break the deadlock with a curling free-kick, but fails to beat Ter Stegen 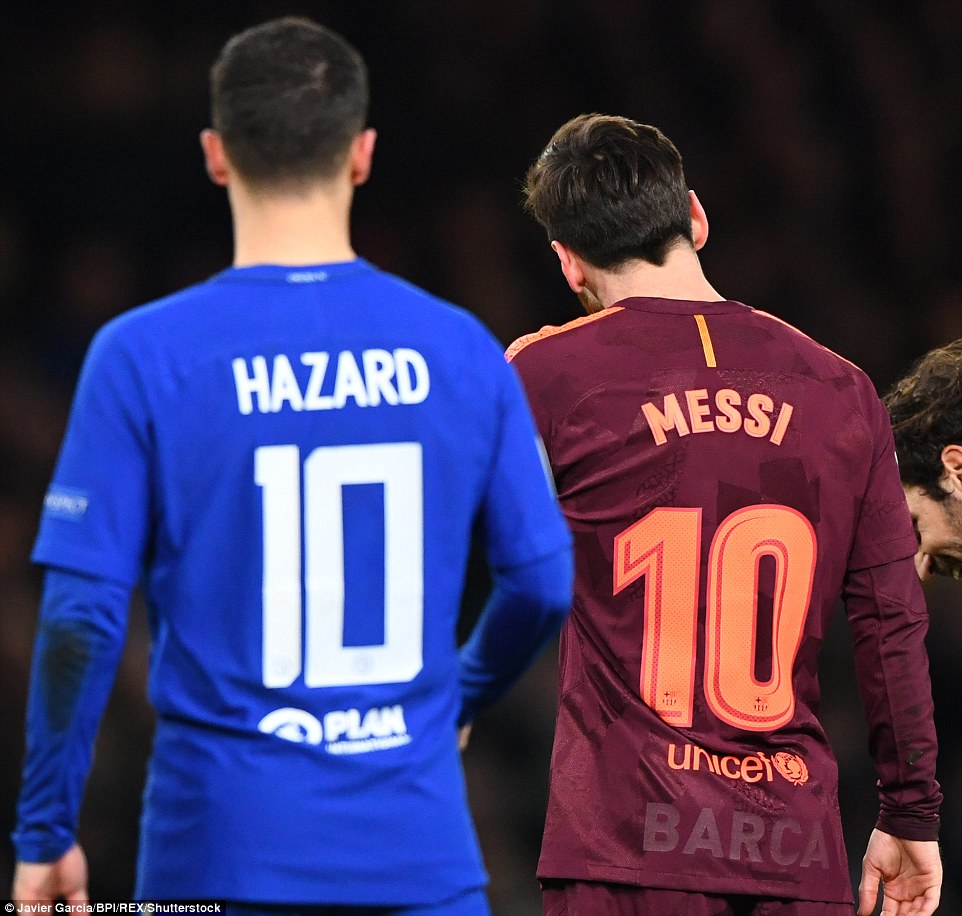 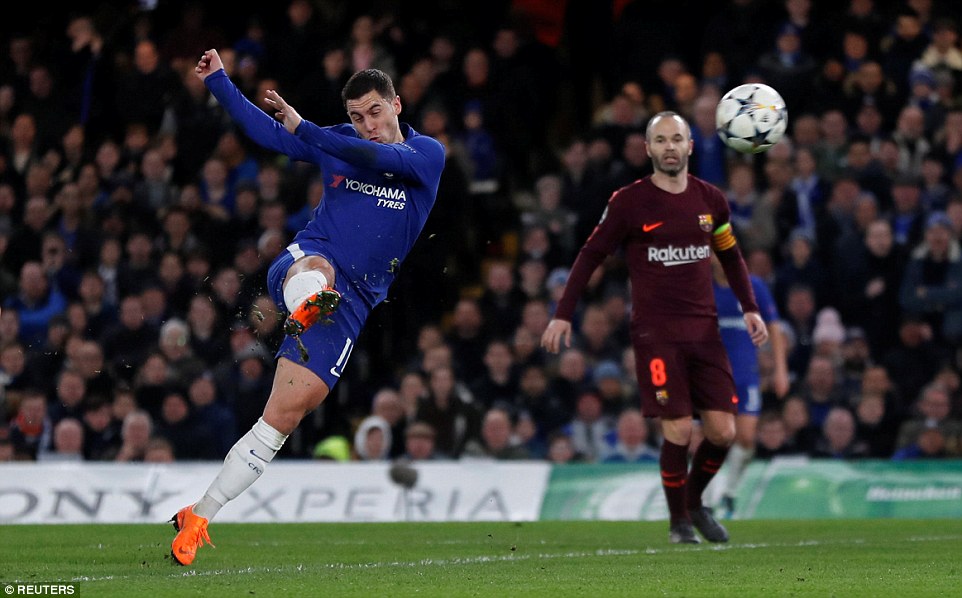 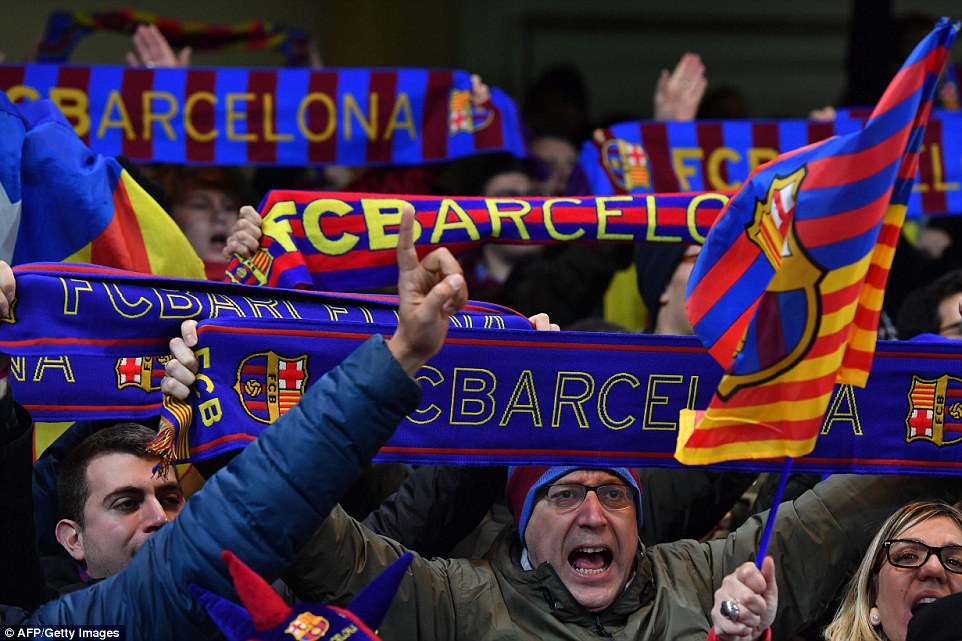 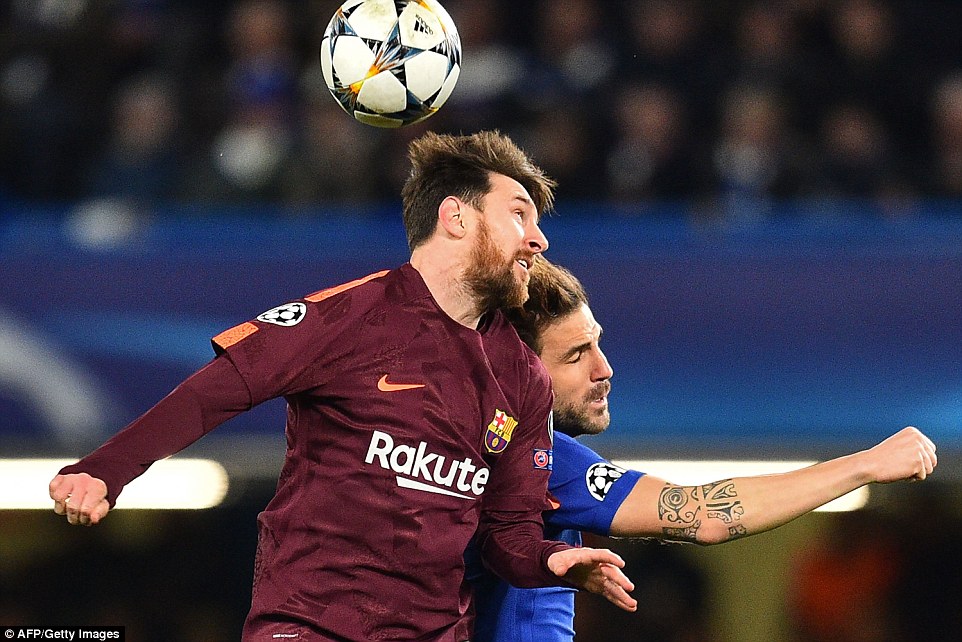 Messi and Fabregas, who have maintained a close friendship since childhood, compete in the air for their respective teams 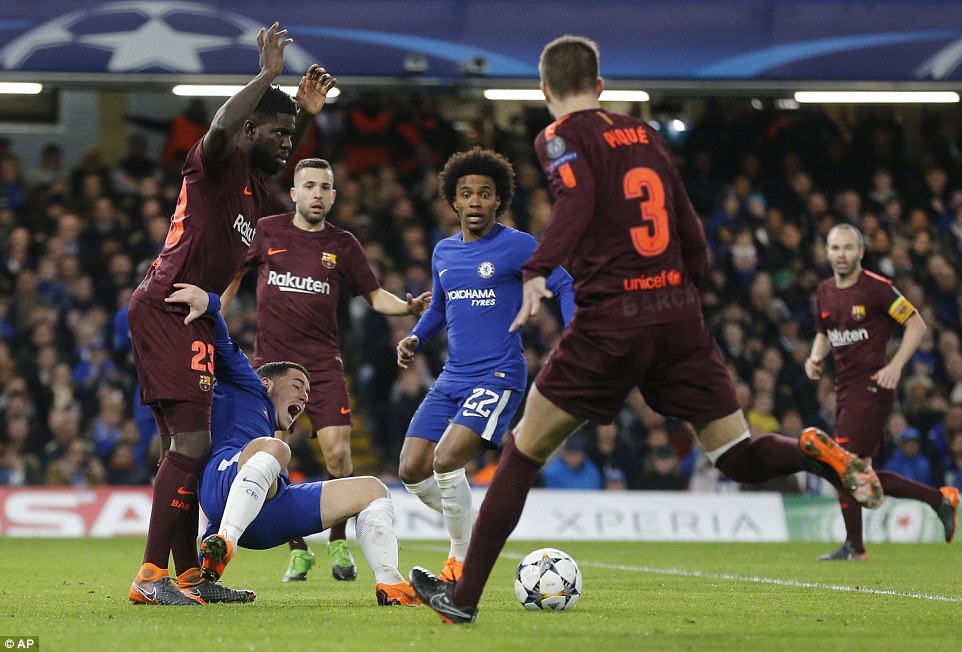 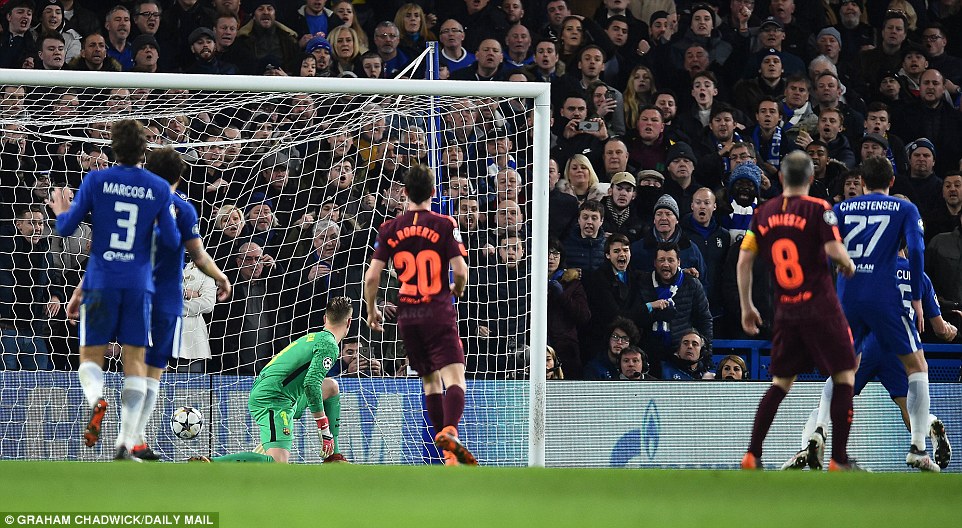 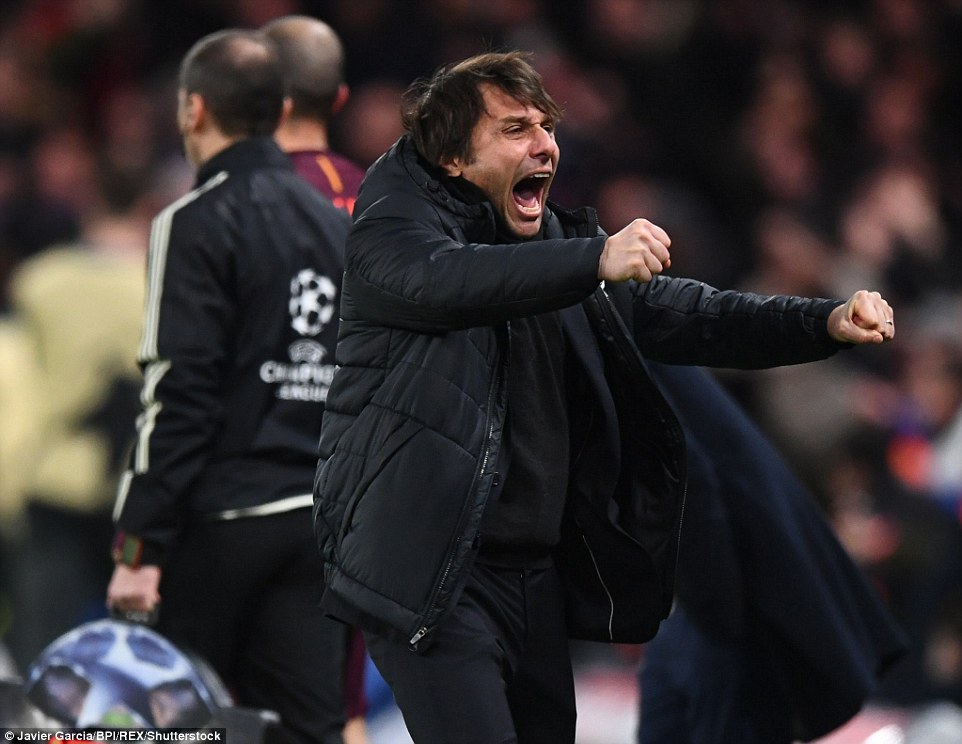 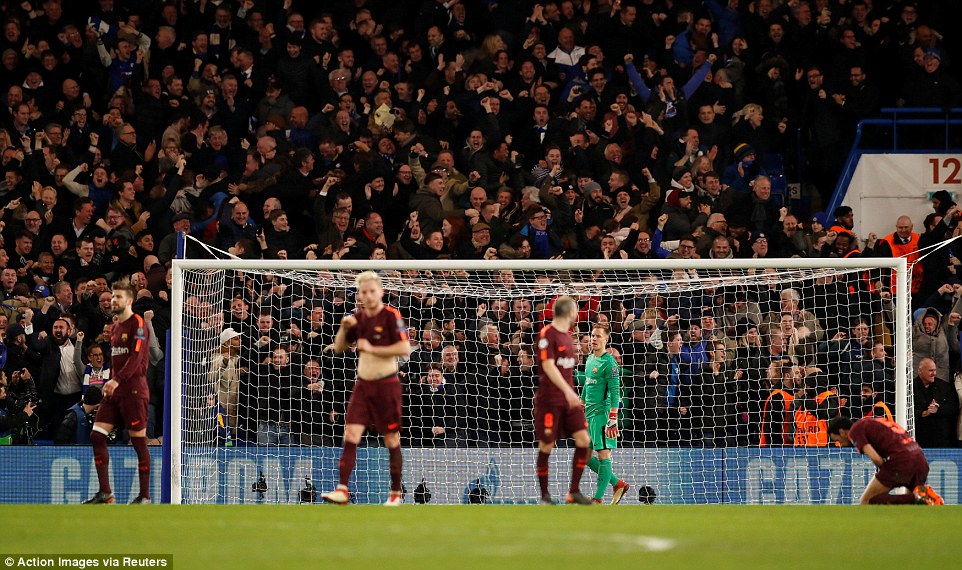