At least the game’s turning point was easy enough to identify amid this manic tangle of eight goals, two of them own-goals, two more ruled out by the video assistant referee, two red cards and two penalties.

The crucial passage of play came with Chelsea trailing 4-2 and on the attack with 20 minutes remaining when Ajax conceded their second spot-kick of the night and were reduced to nine men with both central defenders sent off within a matter of seconds.

First Daley Blind was dismissed for a second yellow card, for a foul on Tammy Abraham in the build up to the penalty which was awarded for a handball against Joel Veltman as he leaned into a shot by Callum Hudson-Odoi. 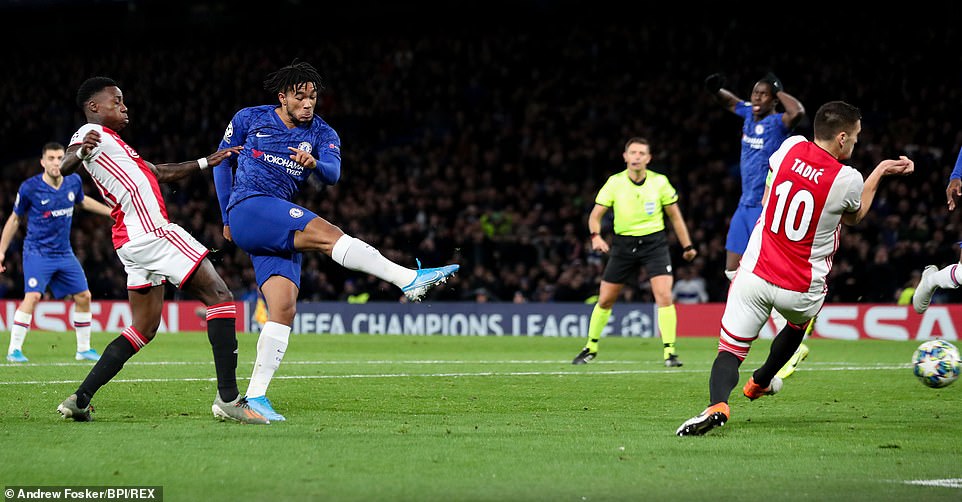 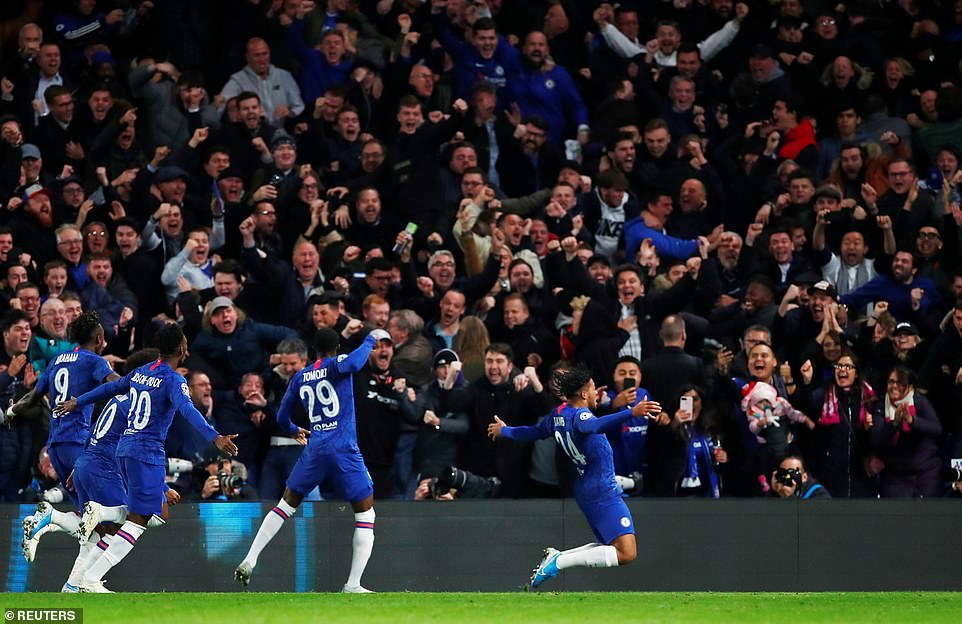 Veltman was sent off during the lengthy Ajax protests although UEFA later insisted it was a second yellow for the handball and not for dissent.

The Dutch champions, so slick and clinical in the first half, were suddenly out-numbered and rattled, and haunted by memories of the Champions League semi-final collapse against Tottenham.

Jorginho stepped forward to coolly convert from the spot to make it 4-3, momentum swung and substitute Reece James levelled when he drove the ball into the net after Kurt Zouma headed against the bar from a corner.

James became Chelsea’s youngest ever Champions League goalscorer but there was really no time to catch breath and dwell on statistics when there was a winner to be found.

Cesar Azpilicueta thought he had grabbed it and slid on his belly towards a corner flag in celebration, kissing his captain’s armband before the VAR crushed his jubilation by cruelly ruling out the goal for an innocuous handball offence against Abraham during the preceding scramble.

It seemed harsh. But then so did the handball decision against Veltman. In the end there was no winner and in truth no-one deserved to lose.

Ajax deserved something from the game for their creative flair and dead-ball delivery in the first half and their determination to hang on with nine men, even though they certainly rode their luck.

Michy Batshauyi twice went close in the frantic closing stages and was denied by a fabulous save by Andre Onana.

Chelsea, meanwhile, can be satisfied by the spirited response while the euphoria was tempered by an injury to Mason Mount – and by their fragility at the back against set-pieces.

Less than two minutes had gone when Azpilicueta conceded a free-kick and Quincy Promes produced a vicious curling ball from the Ajax left. 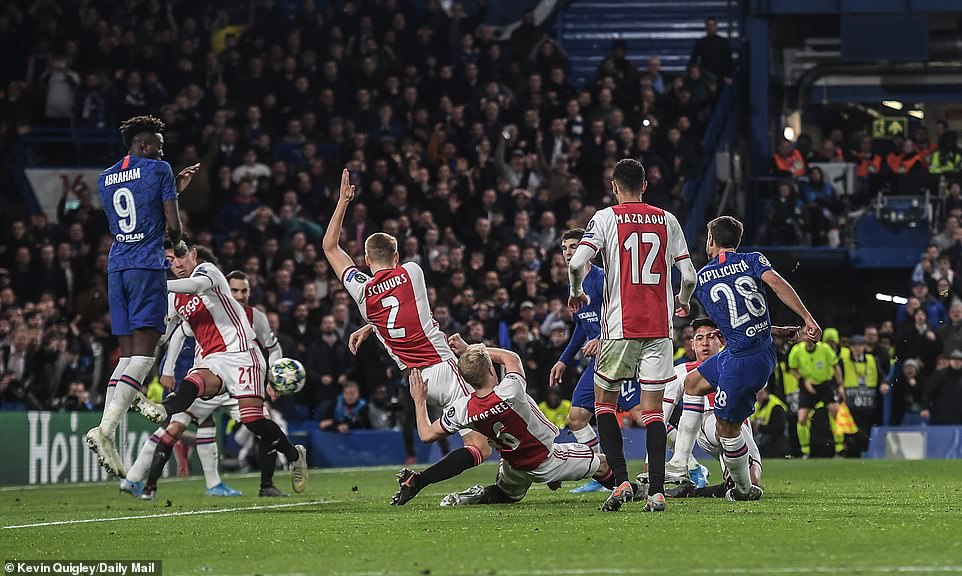 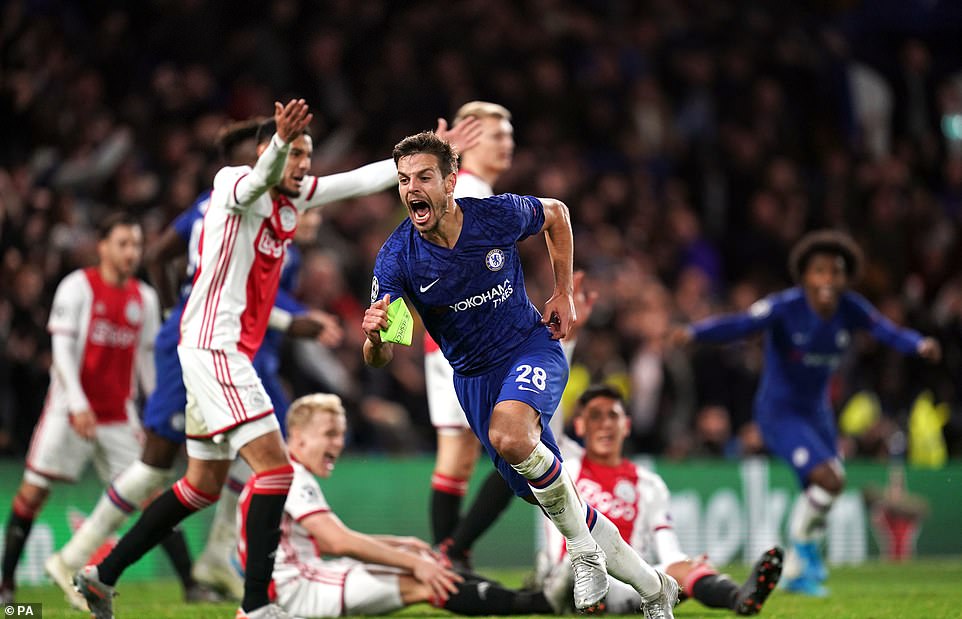 The Spanish full back turns away to celebrate after finding the net, but Ajax players can be seen protesting behind him 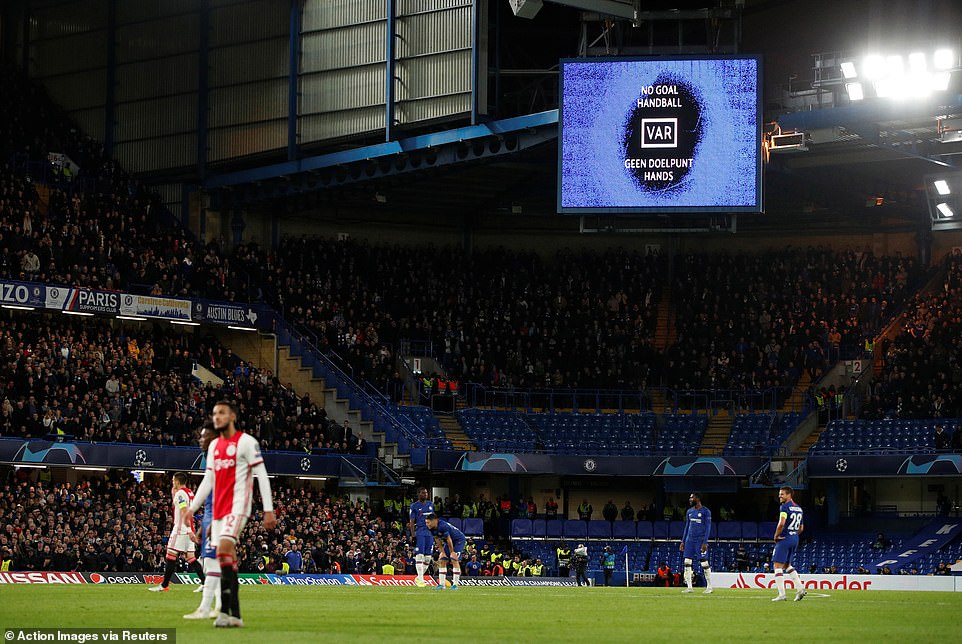 Tammy Abraham attempted to clear only to slice the ball from his shin and past Kepa Arrizabalaga.

Promes celebrated, as did a small pocket of away fans in the West Stand. This was a section of sponsors and corporate supporters immune from the UEFA ban imposed on Ajax for crowd trouble in Valencia, earlier in this campaign.

Chelsea hit back within seconds when Christian Pulisic carved into the Ajax penalty area and was cut down by a mistimed slide tackle from Veltman.

Italian referee Gianluca Rocchi pointed to the spot – there was no doubt – and Jorginho outfoxed goalkeeper Onana with his stuttering run up. 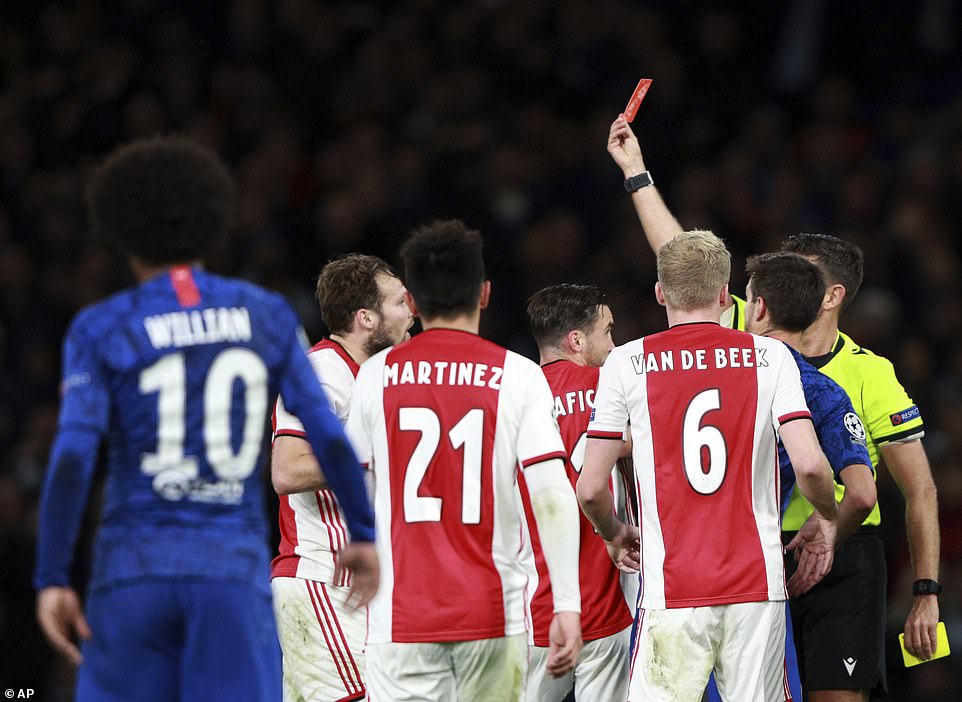 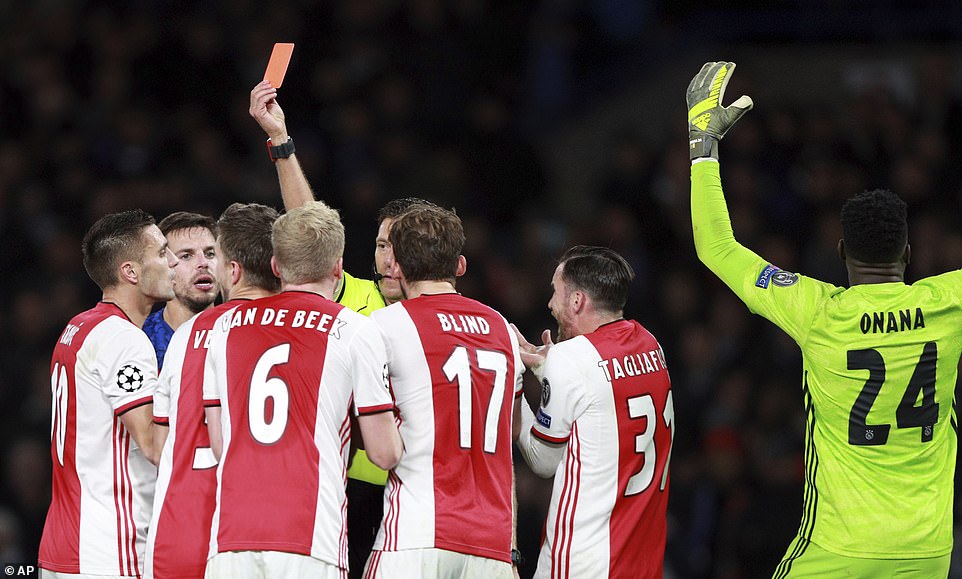 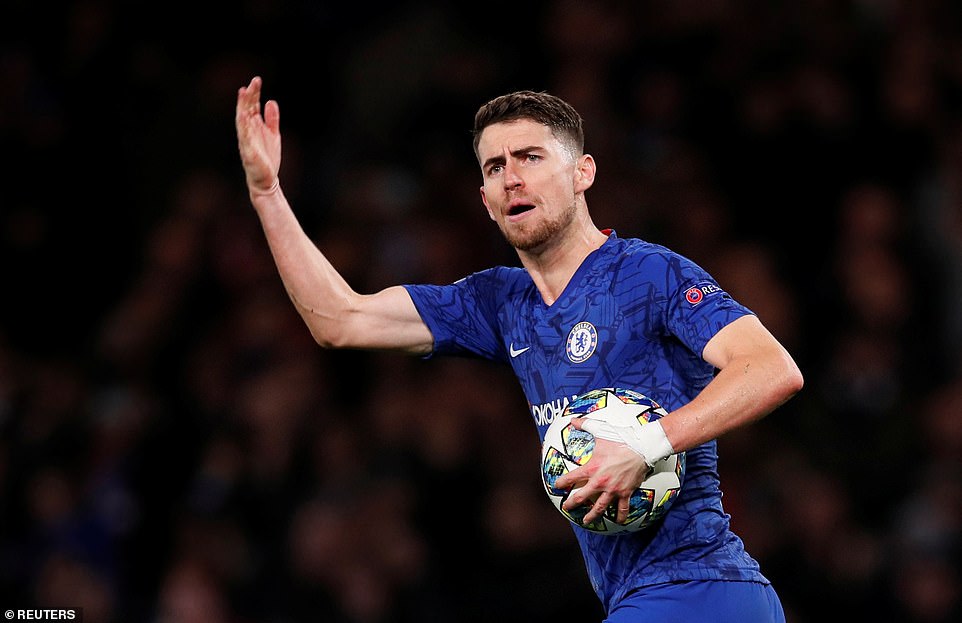 Once again, Jorginho kept his cool from the spot to put Frank Lampard’s side right back in the mix at Stamford Bridge

Abraham beat the Ajax ‘keeper only to find he had strayed a yard offside and the goal was ruled out by VAR before Lampard’s team conceded the second.

Again, it was an in-swinging cross which caused them problems in the heart of defence, this time delivered from the right by the magical left foot of Hakim Ziyech.

Promes drifted behind Azpilicueta at the back post and headed past Kepa from six yards.

Ajax claimed their third in similar circumstances. Ziyech swerved a free-kick to the back post, it bounced into the frame of the goal and smacked Kepa in the face as he scrambled across his goal line.

His attempt to recover had resulted in another own goal. Ajax led 3-1 despite having only one shot on target and a bizarre hush settled over the Bridge. 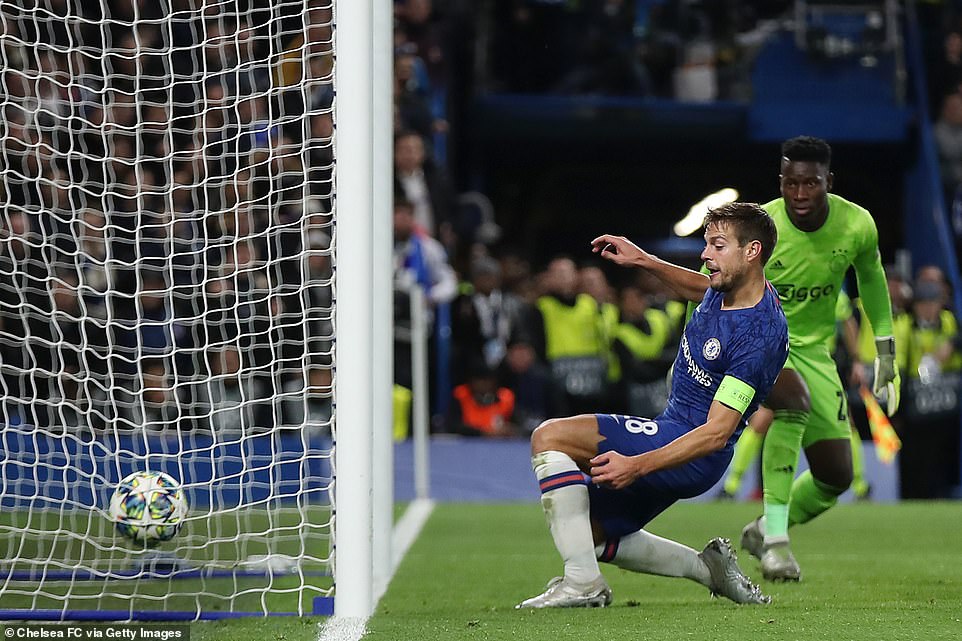 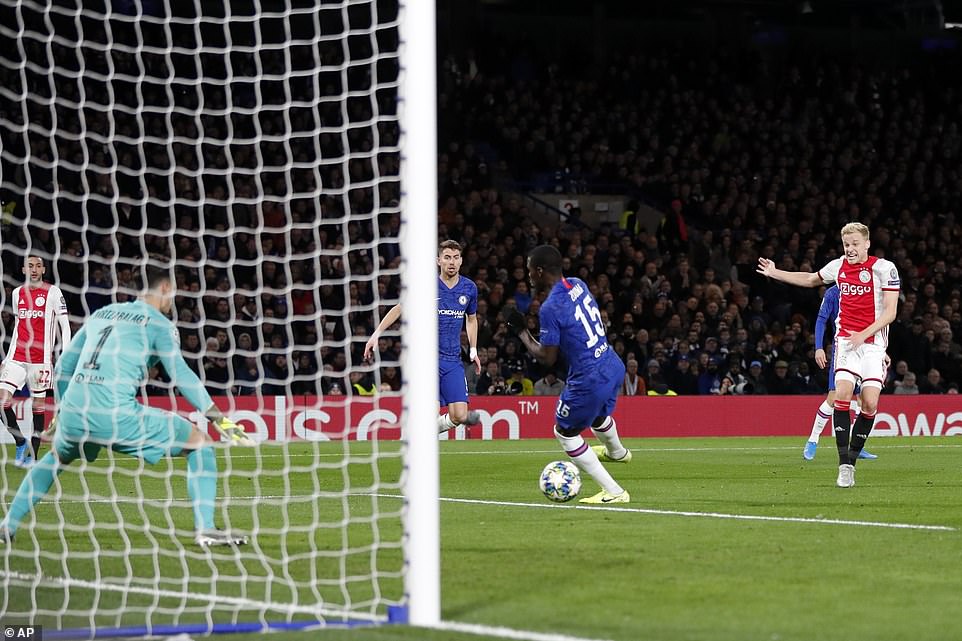 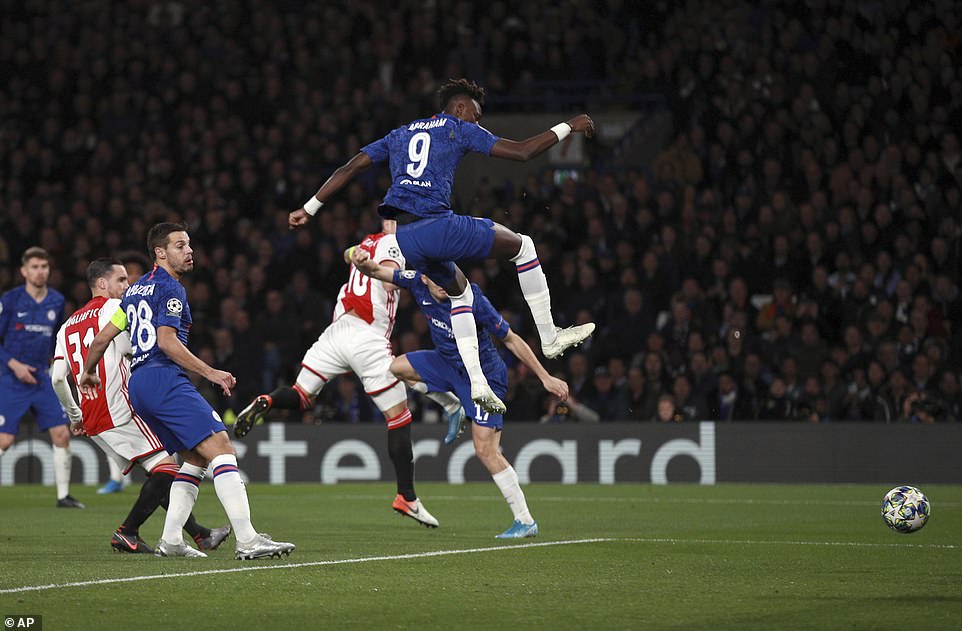 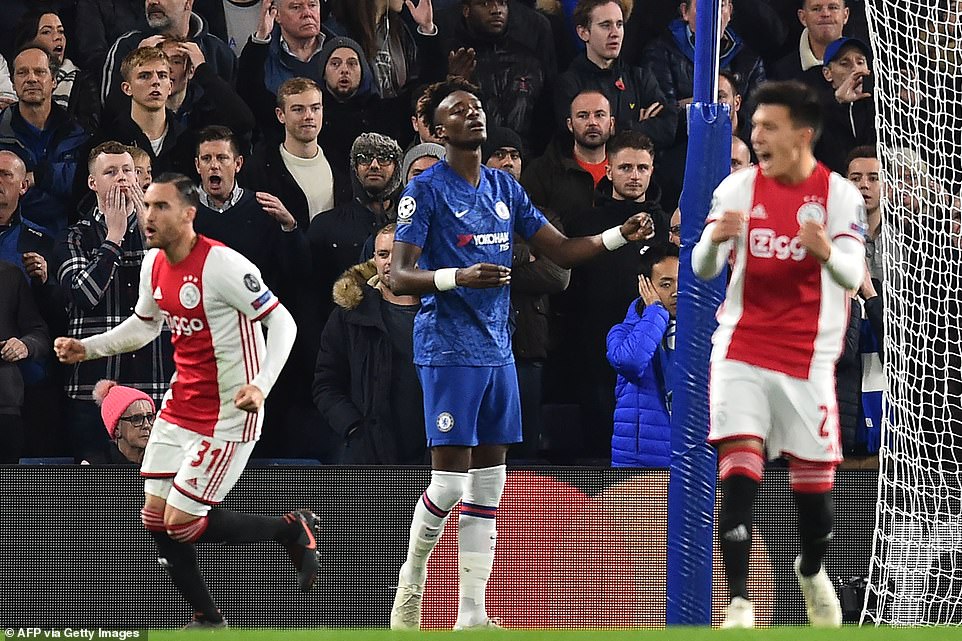 Lampard snapped into action during the half-time interval. Off came Marcos Alonso, Azpilicueta moved to left-back and James stepped in at right-back.

Chelsea performed with more urgency and intensity and Mateo Kovacic released Abraham who forced Onana into a fine an athletic save.

The home fans were revived but Ajax broke away and extended the lead.

Fikayo Tomori missed a tackle and Ziyech, again causing problems as he drifting naturally to the right from his number 10 position, picked out Donny van de Beek in front of goal. 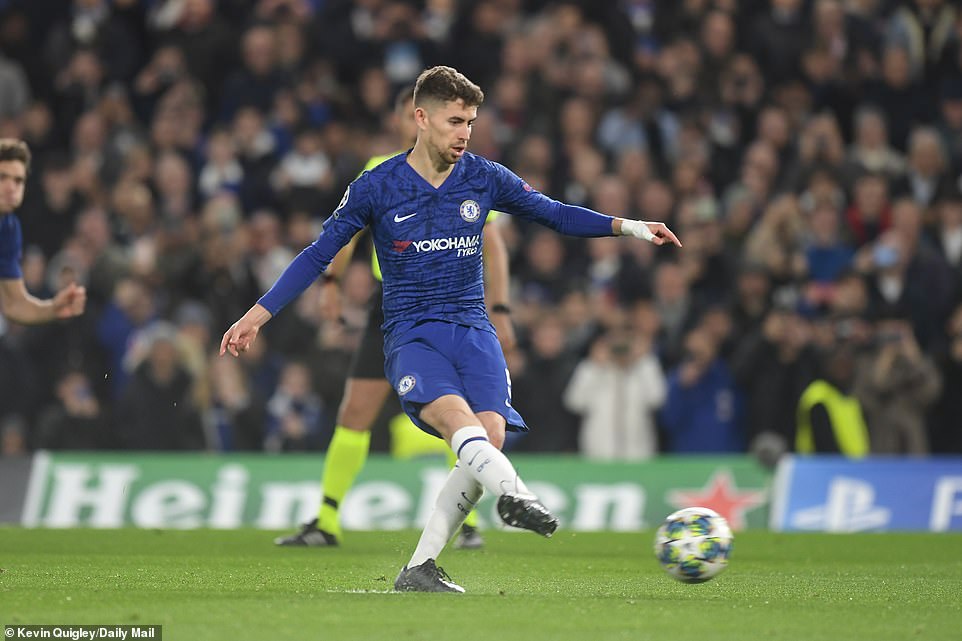 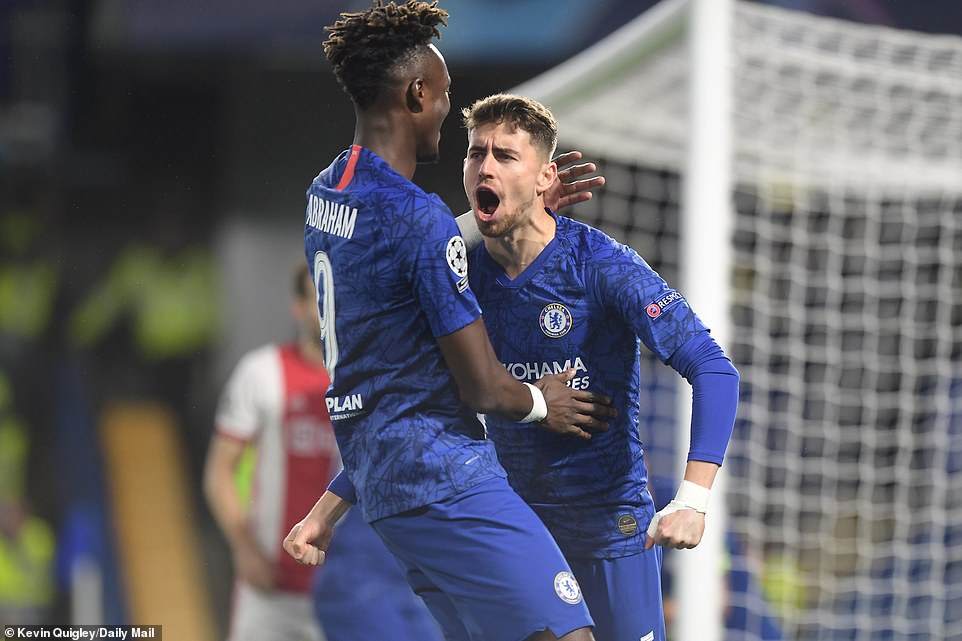 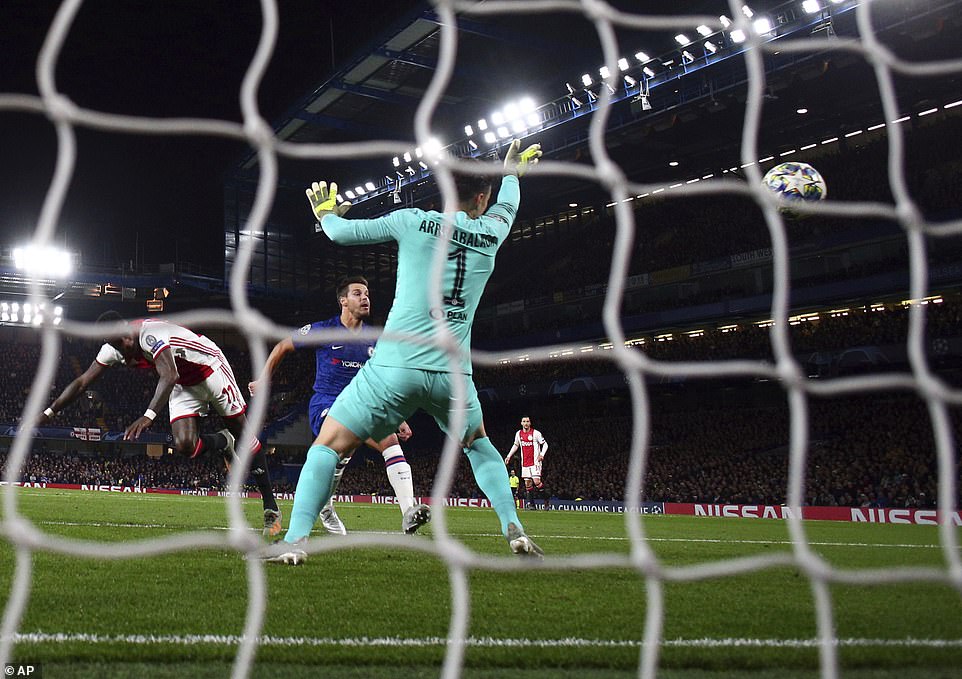 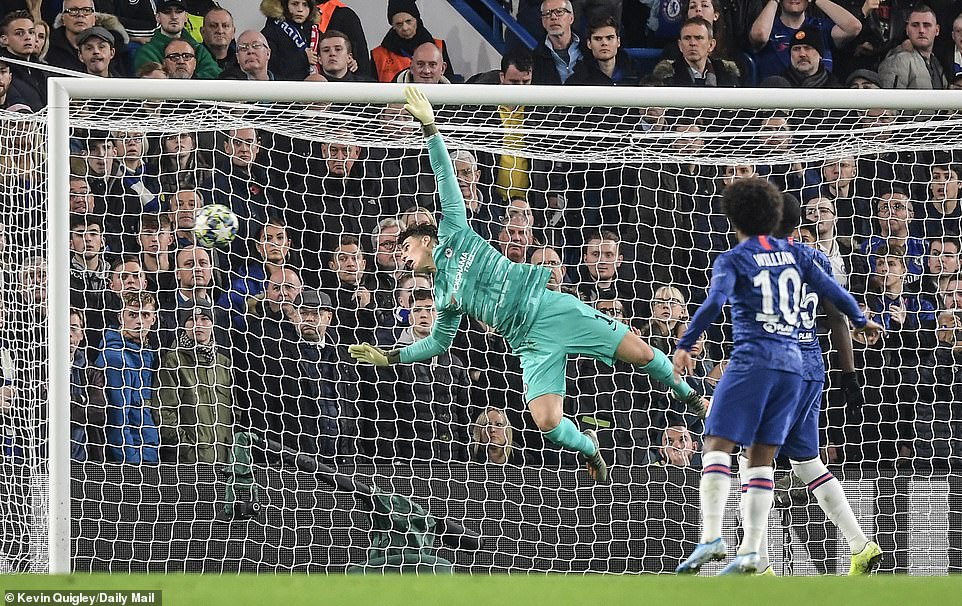 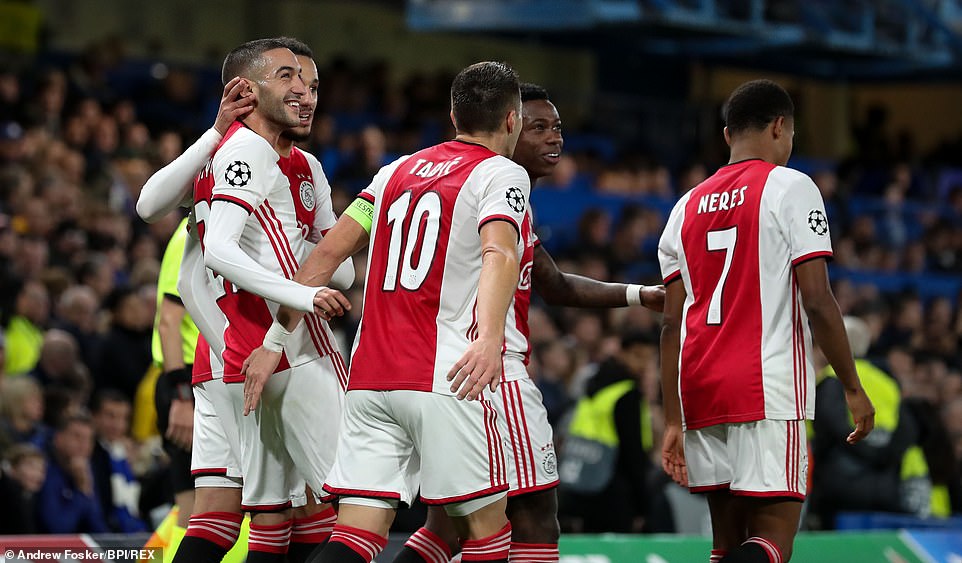 When Van de Beek found the far corner to make it 4-1, it seemed like the end for Chelsea. In fact, it was only the beginning.

Azpilicueta inspired hope when he turned an effort by Abraham over the line from close range and then the game swung with two red cards which promise to have further impact.

Ajax will go into their next game against Lille without their centre-halves and Chelsea will go to Valencia aware that a victory will be enough to secure them a place in the last 16. 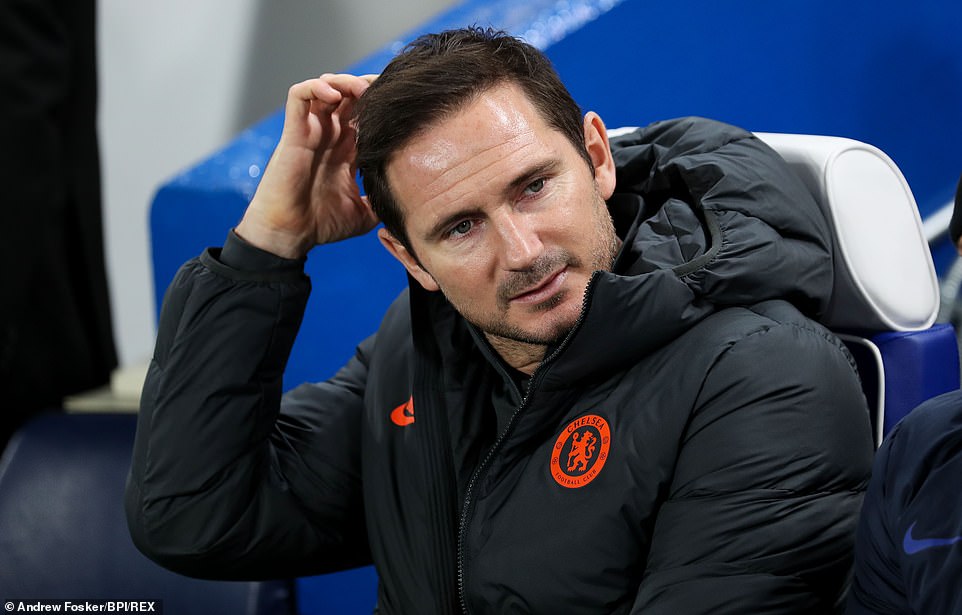 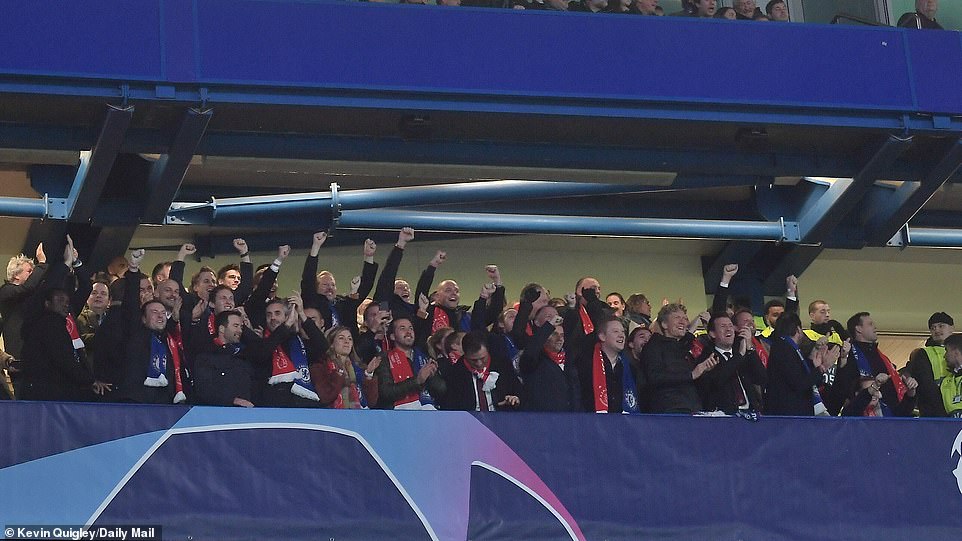 A group of Ajax supporters, clad in half-and-half scarves celebrate as they watch their side race into a healthy lead