It’s party time again! Chelsea celebrate their Super Cup success in style as Antonio Rudiger and Kurt Zouma hit the dance floor and Tammy Abraham poses with his medal… with Mason Mount filming it all!

Thomas Tuchel’s superb start to life at Chelsea continued with their UEFA Super Cup success last night, and his squad were determined to enjoy every moment.

Chelsea lifted the trophy, just a matter of months after their Champions League triumph, after beating Villarreal on penalties in Belfast.

And after the full-time whistle sounded, and the cup was hoisted into the air, the players then headed to their dressing room to continue the celebrations. 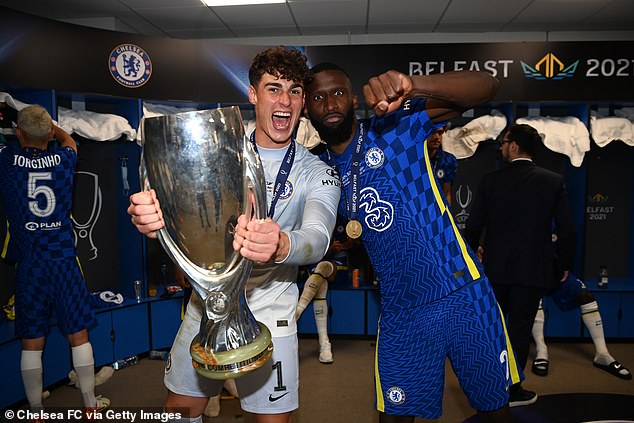 Mason Mount, fortunately for the club’s supporters, was on hand to give a behind the scenes look into the party, which saw team-mates dancing and posing for photos.

First up in a series of posts on Mount’s Instagram story was Trevoh Chalobah, the young defender who has starred in pre-season and impressed once again.

Encouraged by Mount in comical fashion, Chalobah was caught on camera silkily moving along to the music, with Tammy Abraham watching and cheering him on. 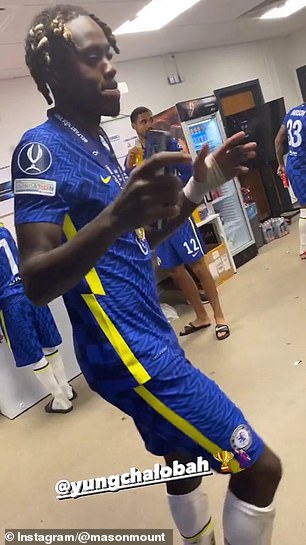 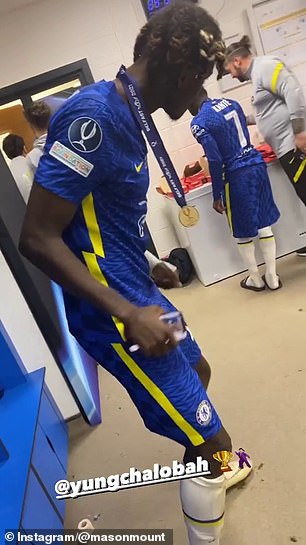 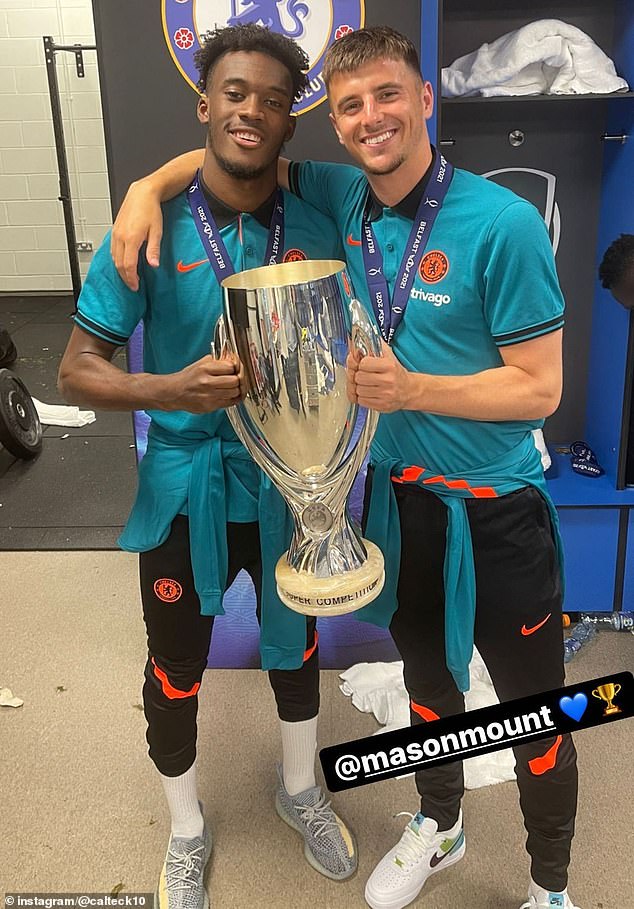 Mount posed for lots of photos in the dressing room, including one with Callum Hudson-Odoi

In the background, the captain for the night, N’Golo Kante, could be seen grabbing a slice of pizza, while other players took to the makeshift dance floor instead.

Kurt Zouma and Antonio Rudiger also showcased their quick feet while bopping along to another song, with both stars watching on while the other took their turn.

There was a special moment for goalkeeper Marcus Bettinelli, who only recently joined the club from Fulham and has already tasted silverware success.

He posed for a photo along with Mount, who took their victorious snap, and Ben Chilwell, as the celebrations continued around them. 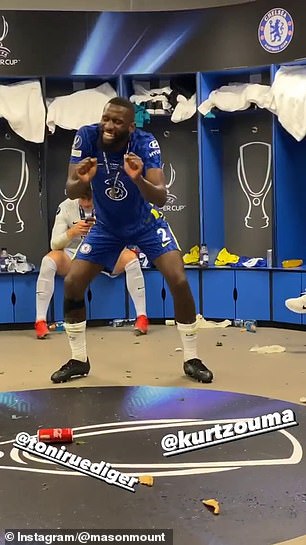 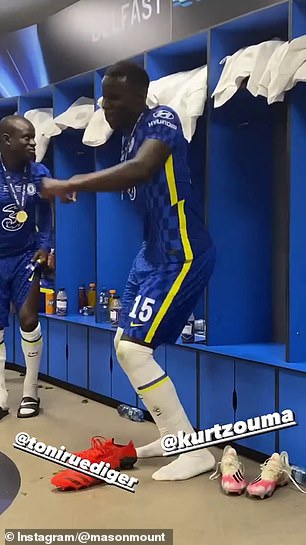 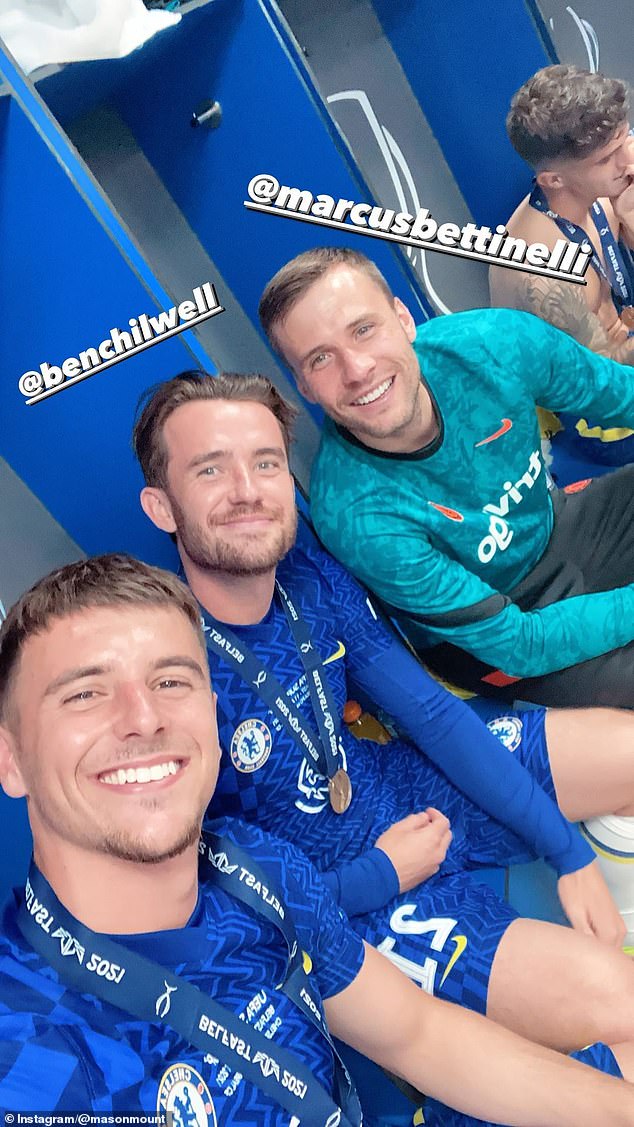 Abraham was next in Mount’s sights, with the striker posing with his medal for a professional picture from a club photographer while his team-mate mocked him.

Accompanied with the caption ‘loves the camera’, Mount filmed himself trying to throw Abraham off while he looked to smile with his newest gong.

The mood was undoubtedly euphoric, and Chelsea’s hard-fought victory was the perfect way to begin boss Tuchel’s first full season at the helm.

The tie finished 1-1 after extra time, after Hakim Ziyech – who was forced off with a serious-looking injury, netted the opener before Gerard Moreno levelled. 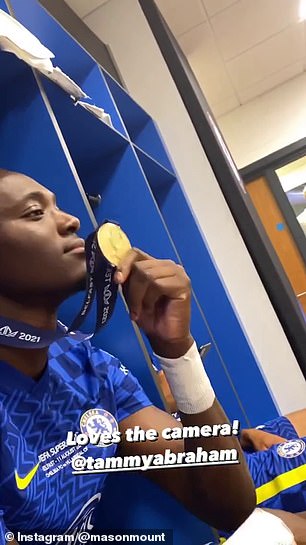 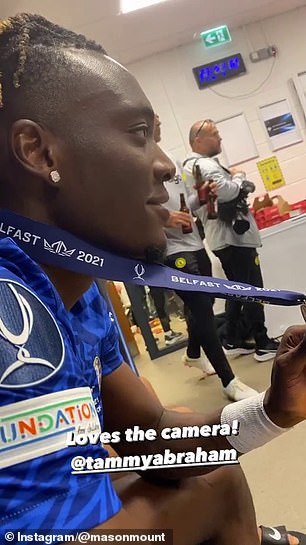 Kepa Arrizabalaga made himself the hero after being brought on for the shootout, and Tuchel’s brave call deep into the evening paid off spectacularly.

The second-choice stopper kept out Villarreal’s second attempt with his first meaningful touch and then also denied Raul Albiol’s spot-kick to seal the 6-5 win.

‘It’s not a normal situation but I was ready because I knew that this can happen and I tried to be ready mentally and physically,’ Kepa admitted.