Christian Pulisic likes to make all the right moves, even if that involves taking on N’Golo Kante.

It’s a challenge few of his Chelsea team-mates would advocate but the clue to his confidence lies in the tattoo on his left forearm: a queen chess piece.

‘Chess is a recent passion that I rekindled during all the time indoors in lockdown,’ says Pulisic. ‘I’d say N’Golo and I are the top two. 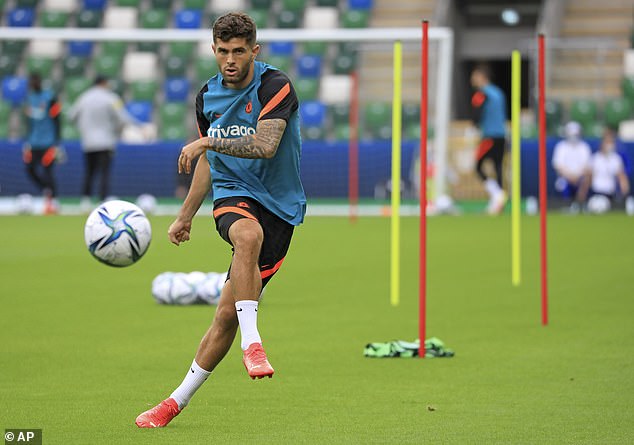 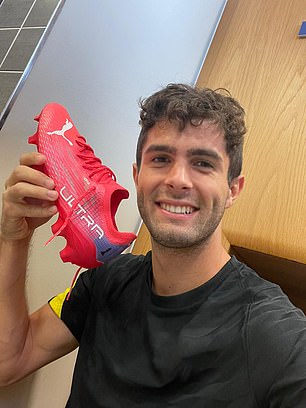 Pulisic is pictured with his new Puma boot

‘We always have good battles. He was much stronger than me when I started, always the No 1, but I made it my goal to beat him so I had to work hard.

‘I used to see him playing Olivier Giroud on the plane and we’d talk about it. It’s an incredible game that can help you with a lot of things like problem-solving or seeing different patterns. I’m not saying it directly correlates to me being a better footballer but it’s certainly better than staring at a screen, gaming.’

On closer inspection, the tattoo bears the name ‘Mate’. It is Pulisic’s middle name and that of his beloved late grandfather.

‘I had it done after the Champions League final. There’s no great significance to the queen, though it’s a cool piece — versatile, powerful and can move anywhere. 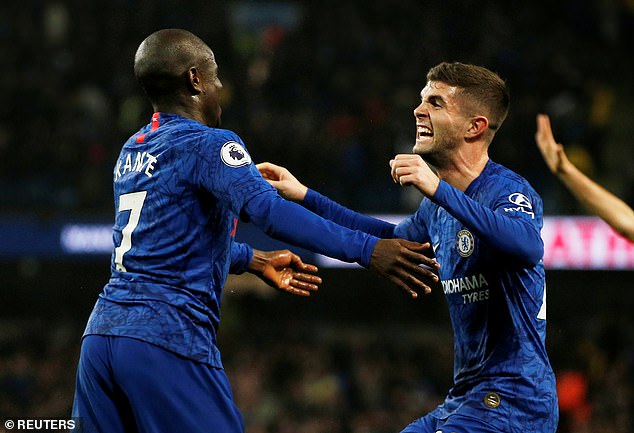 ‘It was my grandpa who taught me how to play when I was younger. I was nowhere near his level and I wish we’d played more but I’m glad we shared that. It’s a memory I hold close to my heart. That’s why the tattoo is so special to me.’

When Mate passed away last December, it preceded a dark period for the American, living alone in London.

Already prone to over-analysing his performances, that introspection went deeper after Thomas Tuchel replaced Frank Lampard as manager and Pulisic found himself increasingly on the bench.

Wrestling with the changes in his life challenged his mental health, prompting Pulisic to dig deep and ask for help.

‘It took me a while to realise that to speak up feels strong,’ says Pulisic. ‘I thought that I was too tough to need help. When it’s all on you, it can really feel like a lot. Opening up, it’s a hard thing for a lot of people, as it was for me. I reached out to a therapist and that’s not something that anyone should ever be ashamed of. 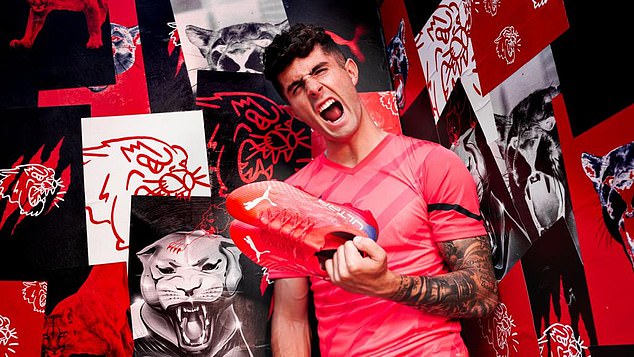 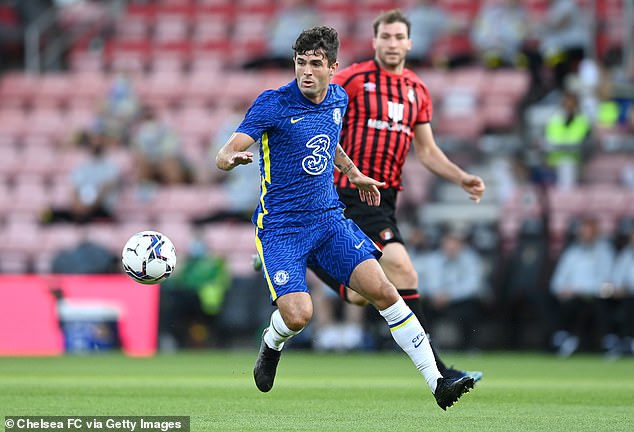 Pulisic is prone to over-analysing his game, while the death of his grandfather preceded a dark period of his life 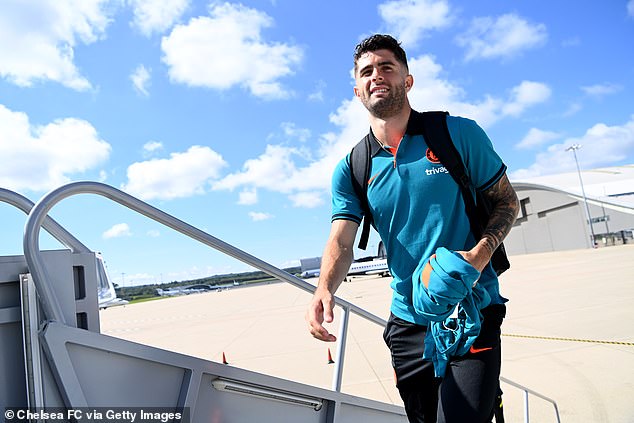 The American thought he was ‘too tough’ for help, but reached out for mental health support

‘It was kind of building up, as it was for a lot of people,’ he reflects. ‘Not just living alone but everything being closed up. Covid times brought a lot of changes and things were happening in my life.

‘I was lucky that people at Chelsea and the national team steered me in the right direction.’

Catharsis comes from what he describes as ‘clear the head’ runs around Wimbledon and Richmond Park — ‘a beautiful part of London’ — and a support system of family back in Hershey, Pennsylvania.

Among his inspirations has been his autistic brother, Chase.

‘Chase has taught me to just enjoy life. The way I see him, he enjoys just doing the simple things. He doesn’t have a care in the world and doesn’t let anyone’s judgement affect him. He inspires me every day. I wish I could be like that at times; how confident he is in himself, it’s amazing to me.’ 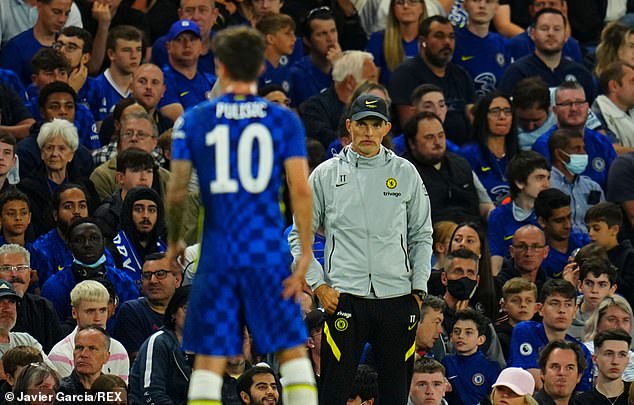 For a £58million signing, Champions League winner and US captain, the vulnerability that 22-year-old Pulisic shows is surprising. It is a reminder that mental health can challenge anyone, or it is perhaps indicative of Tuchel’s coaching practices.

TV viewers have been able to hear first-hand the blunt messages Tuchel barks out from the sidelines. Having played for the German at Dortmund, Pulisic knows him well.

‘He’s always been intense, very competitive, nothing much has changed. Without the crowd noise you can hear him more but he doesn’t mean it in a bad way.’

That brought small comfort last season when, after standout performances against Atletico, Porto and Real Madrid, Pulisic found himself dropped for the second leg of the European semi-final. Afterwards, he voiced his frustration.

‘It was very tough. I felt like I was in my best form and to be back on the bench was extremely tough. When you are in form, you feel good and want to carry on.

‘Competition here is fierce. We want to win titles. It is about keeping your head in the right place so if an opportunity comes you can still make a big impact.’ 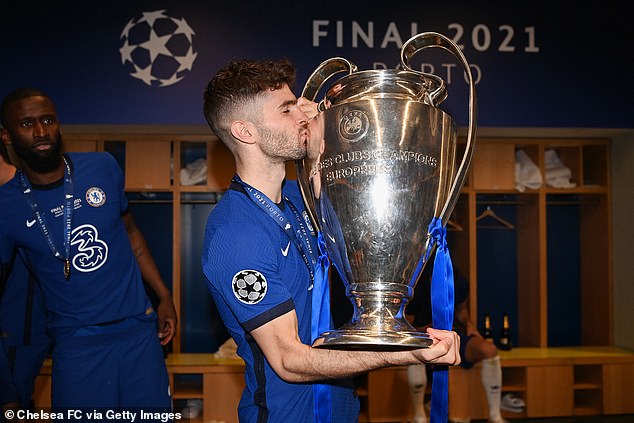 While Pulisic hopes to deliver on the pitch, he is delivering off it with a $500,000 (£360,000) donation to help develop playing fields for youngsters at the club where he grew up

While Pulisic is determined to take that chance this week, the season begins against the backdrop of a campaign for social change that he is driving back home in the United States.

At the height of Covid in Pennsylvania, Pulisic donated meals for medical workers and poured $500,000 (£360,000) into a scheme to develop playing fields for youngsters at the club where he grew up. ‘It seemed a simple thing to do,’ says Pulisic.

In the same vein, he is working with Puma to grow participation in the sport — establishing camps and taking football to the under- privileged across the States. The occasion is marked by Puma releasing a personalised boot for Wednesday’s UEFA Super Cup game against Villarreal — with a chess piece on the heel.

So how would he feel if his project spawned the next captain of America? ‘Old,’ he laughs. ‘No, that is the absolute dream. It would be incredible to have an impact on anyone’s career. I want the game to grow. I’m just very passionate about allowing anyone who loves the game to play. That’s what I’d like to be my legacy, giving people that chance.’

Puma have teamed up with boot customiser Silni to produce a special pair of ULTRA 1.3s that Pulisic will debut in tonight’s Super Cup final.