Facebook has come under fire following complaints from LGBTQ users that they were being shown conversion therapy and gay cure ads and videos on their newsfeeds.

One user Alystair Ryder said an ad for a self-help book called Help for Men with Same-Sex Attraction popped up on his Facebook page, according to a report by the Telegraph.

Ryder said the ad left him ‘shaken’ and he doesn’t know why the company would allow something like that on the site.

‘It was written in a way to try to appeal to people who may be depressed or be experiencing self-loathing due to their sexuality,’ he said, according to the outlet.

He continued: ‘I think it’s pretty irresponsible for Facebook to allow an ad that preys on gay men with mental health issues in such a negative way on their homepage.’ 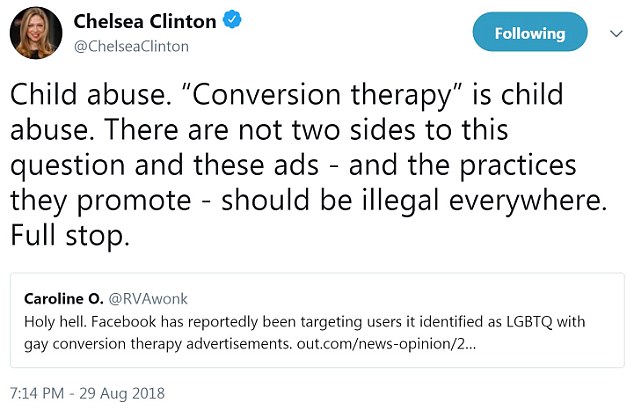 Another user Tessa Ann Schwartz said she too was shown ads and videos for conversion therapy, a controversial treatment which claims to ‘cure’ homosexuality by changing a person’s sexual orientation to bisexual through psychological or spiritual interventions.

One video that popped up on the social networking site was titled Homosexuality Was My Identity by the religious group Anchored North.

According to the Telegraph, users said when they clicked on an option to find out why they were being shown the ads they were told that it was because they showed interest in ‘gender issues’.

‘There are not two sides to this question and these ads – and the practices they promote – should be illegal everywhere. Full stop,’ she posted.

Facebook responded to Clinton’s post saying they do not allow gay conversion therapy ads and removed them from the site.

‘We removed these ads after further review. While we may miss some, we’re working hard to make sure we quickly find and take down bad ads,’ the tweet read. 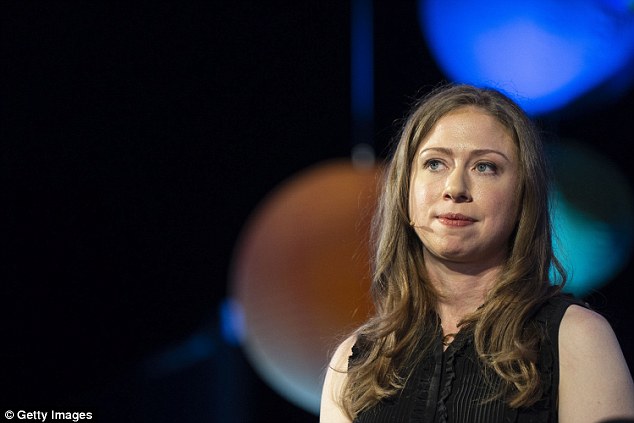 ‘There are not two sides to this question,’ Chelsea Clinton lashed out at the media giant over its controversial ads 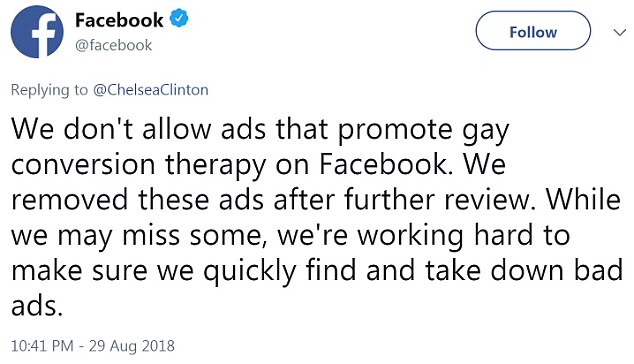 A Facebook spokesperson told the DailyMail.com that the offending ads appeared on users’ newsfeeds in 2017 and were immediately removed after they brought to their attention.

The ads, which came from a group promoting self-help books,  haven’t appeared on the site since last year, the spokesperson said.

According to the Telegraph, Facebook blamed the incident on ‘micro-targeting’ algorithm.

This isn’t the first time Facebook has come under fire for ads posted to its site. Earlier this month, the company removed more than 5000 ad-targeting options in a bid to prevent advertisers who may want to discriminate against groups of people based on ethnicity, beliefs, political affinity or other data that could be sensitive or personal.

The announcement came after the US Department of Housing and Urban Development filed a complaint against the company alleging that advertisers were allowed to target which groups of people received ads on homes available for rent or purchase based on race, religion, gender, nationality or disabilities.

‘When Facebook uses the vast amount of personal data it collects to help advertisers discriminate, it’s the same as slamming the door in someone’s face,’ Anna Maria Farias, assistant secretary for Fair Housing and Equal Opportunity, said in a statement.

According to HUD, an investigation confirmed that advertisers on Facebook could exclude groups of people who expressed interest in parenting, China, the Bible or assistance dogs.

In a blog post, Facebook said it removed the targeted ad options to minimize the ‘risk of abuse’.

‘This includes limiting the ability for advertisers to exclude audiences that relate to attributes such as ethnicity or religion,’ the media giant said.