Chelsea Clinton showed off her baby bump in a cheerful pink sundress while attending Pride Live’s Stonewall Day celebration to kick off WorldPride weekend in New York City on Friday.

The 39-year-old, who is due to give birth some time this summer, beat the heat in a $258 billowy cotton frock by Hatch as she joined Lady Gaga, Alicia Keys, Donatella Versace, and Whoopi Goldberg at the event held at the Stonewall Inn.

Chelsea was among the famous faces who took the stage near the iconic gay bar to help commemorate the 50th anniversary of the 1969 Stonewall Riots — an uprising that catalyzed the LGBTQ rights movement. 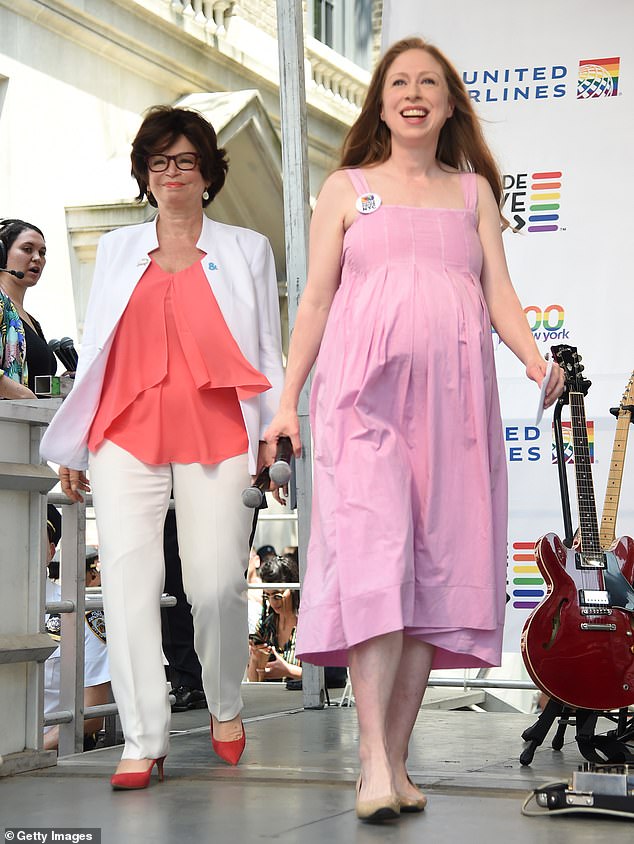 Celebrity: The former first daughter was among the famous faces who took the stage near the iconic New York City gay bar the Stonewall Inn

Thousands of people converged on Friday at the Stonewall Inn to take photos and share in the legacy of the gay bar where patrons resisted a police raid, sparking protests and longer-term organizing that made the cause considerably more visible.

With the modern incarnation of the Stonewall Inn as the focal point, the day’s celebrations included music, speeches, and an evening rally.

Chelsea was among the celebrities who addressed the crowd that stretched for blocks on a nearly 90-degree afternoon, and despite being heavily pregnant and outside in the heat, she had a glow about her.

The former first daughter wore her light brown hair loose around her shoulders and dressed up her airy empire waist frock with a pair of sensible nude wedges, a departure from her beloved nude pumps.

Chelsea honored the activists for fighting back ‘against discrimination, intolerance, and indifference,’ according to Pride Radio. 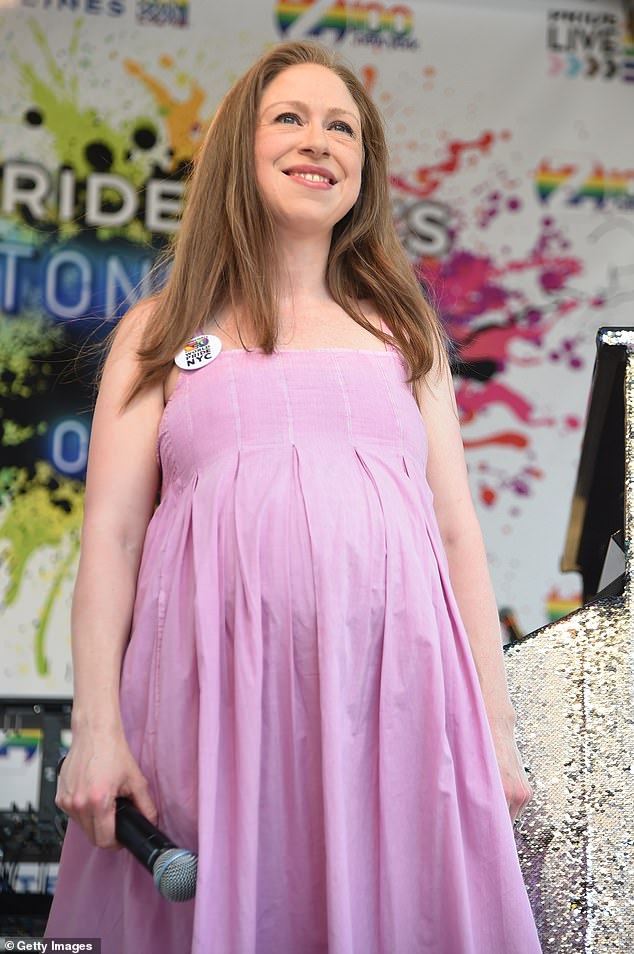 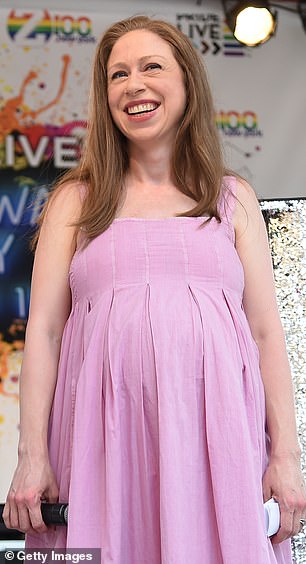 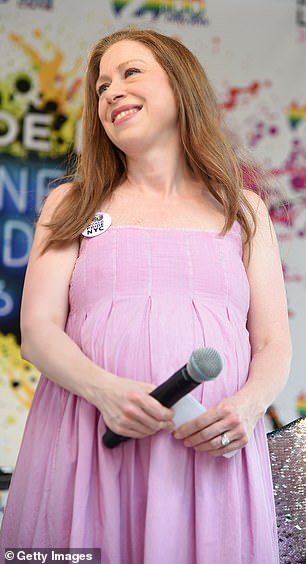 Breezy: Chelsea’s $258 dress from Hatch has an empire waist and is made out of airy cotton 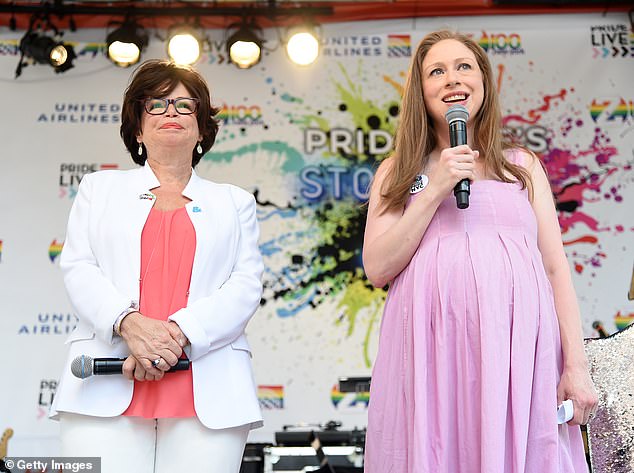 Dynamic duo: The expectant mom was joined on stage by Valerie Jarrett, a senior adviser to former President Barack Obama

A-listers: Lady Gaga (left) and Alicia Keys (right) both performed at the event commemorating the 50th anniversary of the 1969 Stonewall Riots

‘Their spirit and unyielding passion and belief in community continue to inspire and call us to action,’ she said.

The expectant mom was joined on stage by Valerie Jarrett, a senior adviser to former President Barack Obama.

Valerie praised the Obama administration for naming the Stonewall Inn the first National Monument dedicated to telling the story of the LGBT community.

‘Let’s keep up the good fight started by the LGBTQ community fifty years ago today, amidst the Civil Rights movement and the fight for gender equality,’ she said. ‘The fight continues. And we won’t stop until we win… Stonewall today reminds us why we will win.’

Last year, Pride Live announced the creation of an annual Stonewall Day on June 28 to mark the start of the riots at the Stonewall Inn in 1969. 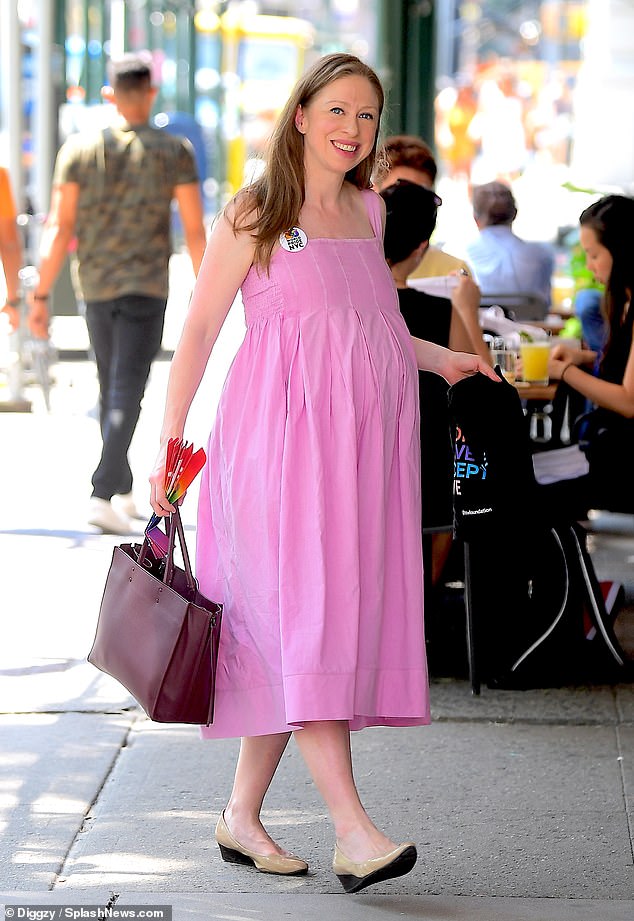 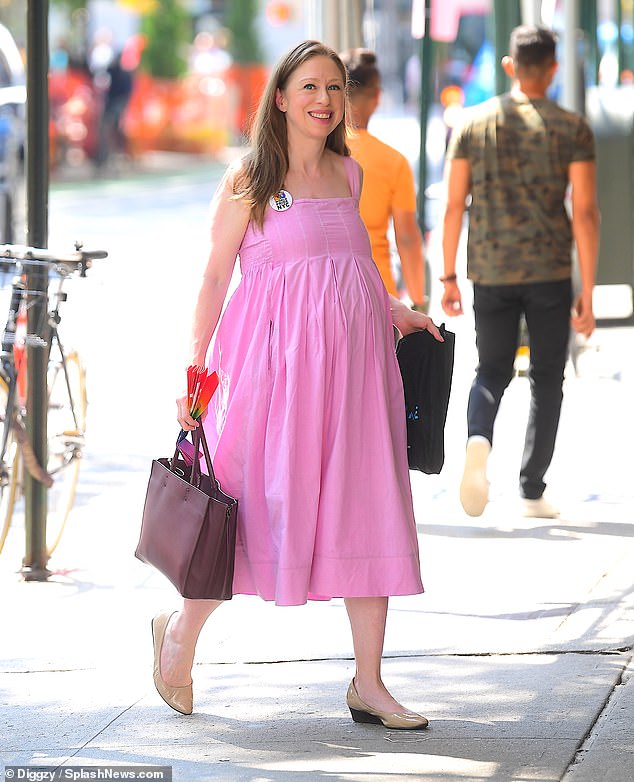 Happy: Chelsea appeared to be in good spirits and flashed a smile to the photographers who were snapping her picture

In addition to making an appearance at the second annual event, Chelsea also tweeted about the anniversary on Friday.

‘Fifty years ago today the police raided the Stonewall Inn – a regular occurrence, but the patrons decided to fight back & helped start a new chapter of activism and advocacy in the fight for LGBTQ+ equality – a fight that’s still going on today, half a century later,’ she wrote.

Chelsea was later seen heading home carrying her maroon tote as well as a rainbow fan and what looked like a cloth bag. She appeared to be in good spirits and flashed a smile to the photographers who were snapping her picture.

The soon-to-be mother-of-three, who has a daughter, Charlotte, four, and son, Aidan, three, with her husband, Marc Mezvinsky, 41, has been keeping busy in her final trimester.

Despite being close to her due date, she has been seen stepping out multiple times this month and attending events such as Stonewall Day like she normally would. 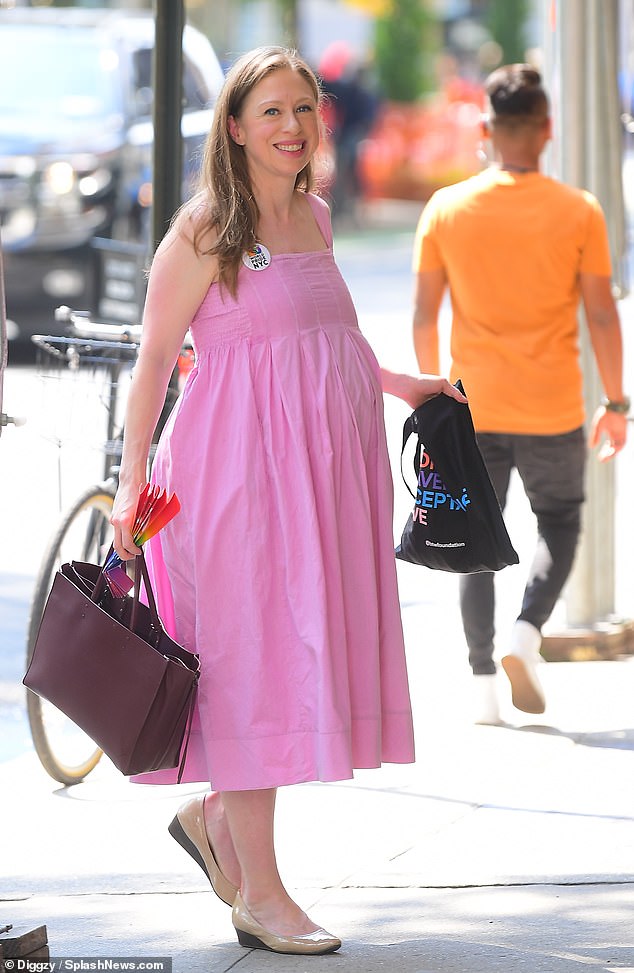 Hands are full: The expectant mom had a rainbow flag in one hand and what looked like a cloth tote in the other 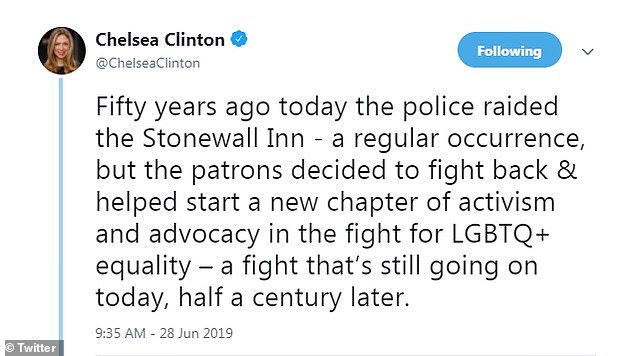 Using her platform: In addition to making an appearance at the second annual event, Chelsea also tweeted about the anniversary on Friday 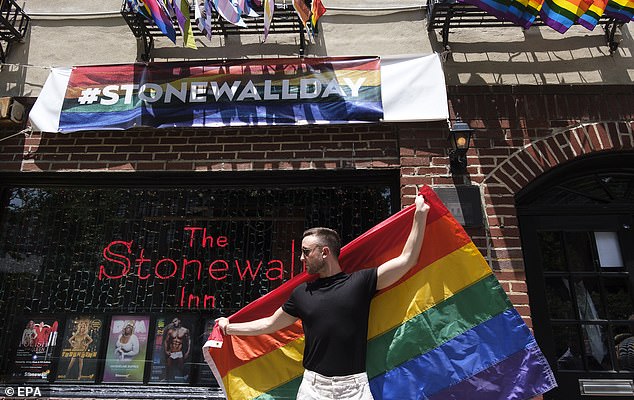 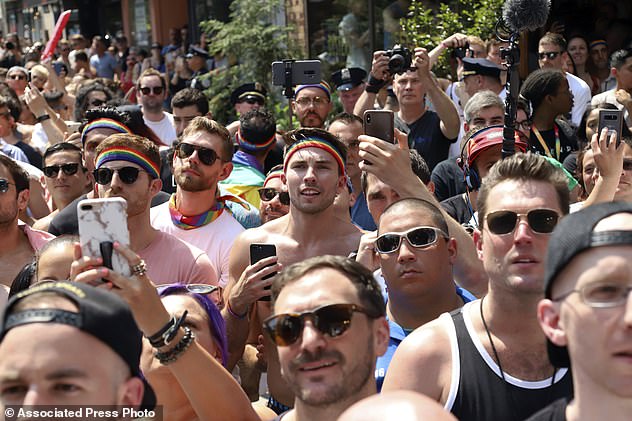 Not dampening their spirits! Thousands of people converged celebrated Stonewall Day on Friday despite the blazing heat

Friday’s events were kicking off a big weekend of Pride festivities in New York and elsewhere. In New York, Sunday’s huge WorldPride parade ⁠— and an alternative march intended as a less corporate commemoration of Stonewall ⁠— also will swing past the bar.

The Stonewall Inn is now a landmark and part of the Stonewall National Monument, but in 1969, it was part of a gay scene that was known, yet not open. At the time, showing same-sex affection or dressing in a way deemed gender-inappropriate could get people arrested, and bars had lost liquor licenses for serving LGBTQ customers.

The police raid on the bar began early the morning of June 28, 1969. The nightspot was unlicensed, and the officers had been assigned to stop any illegal alcohol sales.

Patrons and people who converged on the bar on Christopher Street resisted, hurling objects and at points scuffling with the officers.

Protests followed over several more days. A year later, LGBTQ New Yorkers marked the anniversary of the riot with the Christopher Street Liberation Day March. Thousands proudly paraded through a city where, at the time, LGBTQ people were largely expected to stay in the shadows.