‘As soon as I did it, I thought it was going to be a long-term injury’: Chelsea star Mason Mount feared the worst after suffering ankle injury against Valencia in Champions League

Chelsea youngster Mason Mount admitted he feared a long-term injury lay-off after suffering an ankle injury against Valencia in the Champions League.

The 20-year-old has since told Sky Sports: ‘As soon as I did it, I thought it was going to be a long-term injury.’

However, he managed to start Chelsea’s 2-1 defeat by Liverpool in the Premier League on Sunday at Stamford Bridge, where he played the full 90 minutes despite claiming he still has a swollen ankle.

‘Your Champions League debut, you don’t want it to end so soon, but that is football. It happened and I try to stay positive,’ he said.

‘I looked forward to the Liverpool game and set a goal that hopefully I could get ready for that. I feel like I am quick at recovering and we worked on it hard, and I was able to get back. 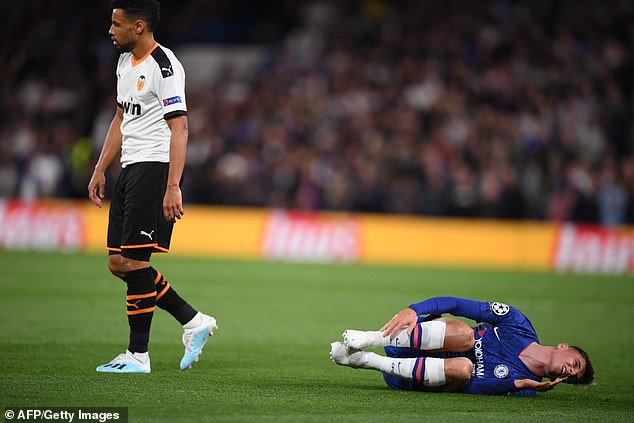 ‘I iced it and it calmed down, and I realised it was not as bad as I first thought. The next day I was jogging on it a little and from then, I knew there was a chance of me being involved (against Liverpool).

‘There is still swelling there now but it is solid and I felt good and trained the day before. I was pretty positive the day before the game that I would be involved.

‘You have to block the injury out of your mind and focus on the game. When I had that chance, which I felt I should have scored, I rolled my ankle a little bit and it felt fine. It was fine throughout the whole game. It was solid.’