Chemicals from sun creams are found in breast tissue

Chemicals widely used in sunscreen have been found in breast tissue — raising concerns about the potential health risk.

The chemicals, used as filters to protect the skin from the sun’s ultraviolet (UV) light, were found in 95 per cent of participants in a study undergoing mastectomies.

The work was done by consultant breast surgeon Lester Barr, of the Prevent Breast Cancer research unit in Manchester, and Philippa Darbre, a professor of oncology at the University of Reading.

Findings: Chemicals widely used in sunscreen have been found in breast tissue — raising concerns about the potential health risk

Breast tissue samples were taken from 40 breast cancer patients having treatment for the disease.

The findings raise concerns about the cumulative effect of such products, say the researchers, because it suggests the chemicals do not stay on the skin, but seep into the body.

‘We have no idea if the various chemicals we found in breast tissue are doing good, causing harm or just sitting there without doing anything,’ says Mr Barr.

‘The chemicals are not themselves known to be carcinogenic. However, in the lab, they do have the ability to mimic the hormone oestrogen. We need to know if they have any effect on breast tissue.’

Around 70 per cent of breast cancers are stimulated by oestrogen.

‘Excessive exposure to oestrogen is a risk factor for breast cancer and these chemicals have the potential to add to the oestrogenic burden of the human breast,’ says Professor Darbre.

‘This raises broader concerns about the unknown effects of these and so many other chemicals present in breast tissue.’

Previous research by Mr Barr and Professor Darbre found that parabens, used widely in cosmetic products, were in the breast tissue of women undergoing mastectomies, even if they had never used such products.

The chemicals identified in the new study were benzophenone-3, octyl methoxycinnamate and 4-methylbenzylidene camphor. 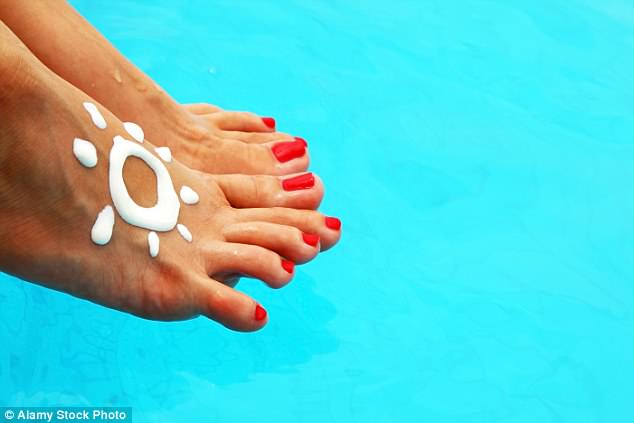 Possible risks? The chemicals identified in the new study were benzophenone-3, octyl methoxycinnamate and 4-methylbenzylidene camphor

The three chemicals are found in many personal care products and are added to clothing marketed as UV-protective.

The research, co-funded by the charities Breast Cancer UK and Prevent Breast Cancer, published last month in the Journal of Applied Toxicology, found that in 95 per cent of women in the study, the UV chemicals were present in one or more regions of the breast.

The chemicals were found in healthy breast tissue that had been removed as part of the mastectomy procedure (researchers cannot use cancerous tissue, as it is needed for tests to determine treatment decisions).

The chemicals were present in minute quantities and, by themselves, say researchers, may not cause harm. Scientists now need to establish whether a particular combination of chemicals might work to have a cumulative harmful effect over a period of years.

The researchers stress that they are not suggesting people should stop using sunscreen, as it is vital to protect the skin from the sun’s harmful rays and may help reduce the risk of skin cancer.

‘Many of these chemicals can be found in water, food and clothing, so avoiding one product is not going to eliminate the problem,’ says Mr Barr. ‘The issue is one of how society uses and disposes of plastics and chemicals.’

Commenting on the study, Dr Christopher Flower, director-general of the Cosmetic Toiletry and Perfumery Association, says: ‘All the UV filters reported in this paper have been assessed for safety . . . and are approved for use in sun protection products and are listed in the EU’s Cosmetic Products Regulation.

‘Presence alone is no indication of toxic effect or potential for accumulation. Many substances are found in our bodies that are merely passing through and cause no harm while doing so.

‘The oestrogenic activity of these substances is far weaker than the synthetic oestrogens in the birth control pill, the use of which has been deemed safe for many decades.

‘There is a wealth of information that supports the safety of UV filters and nothing linking them to a decline in fertility or abnormal endocrine effects.’