Cheney slapped Jim Jordan’s hand, said ‘you did this’ when he tried to help during Capitol riot

Liz Cheney slapped GOP Rep. Jim Jordan’s hand and said ‘get away from me, you did this’ when he tried to escort her during the Capitol riot

Liz Cheney said she smacked away fellow Republican Representative Jim Jordan’s hand during the January 6 Capitol riot when he tried to offer her help, excerpts from a new book detail.

The book by two Washington Post reporters reveal a phone call between the chairman of the Joint Chiefs of Staff and Cheney where Mark Milley asked her how she was doing after the attack on the Capitol by Trump supporters.

‘That f***ing guy Jim Jordan. That son of a b***h,’ the excerpts from CNN claim she said, according to the book I Alone Can Fix It: Donald J. Trump’s Catastrophic Final Year.

Cheney, who broke with her party to criticize Trump and was recently ousted as No. 3 ranking Republican, said during the call that she ran into Jordan on the House floor during the chaos that day.

‘While these maniacs are going through the place, I’m standing in the aisle and he [Jordan] said, ‘We need to get the ladies away from the aisle. Let me help you,” the Wyoming at-large representative detailed to Milley.

Republican Rep. Liz Cheney (center) said, according to a new book, that she smacked fellow GOP Rep. Jim Jordan’s hand away during the January 6 Capitol riot and told him to ‘you f***ing did this’ when he offered her help during the chaos in the House chamber 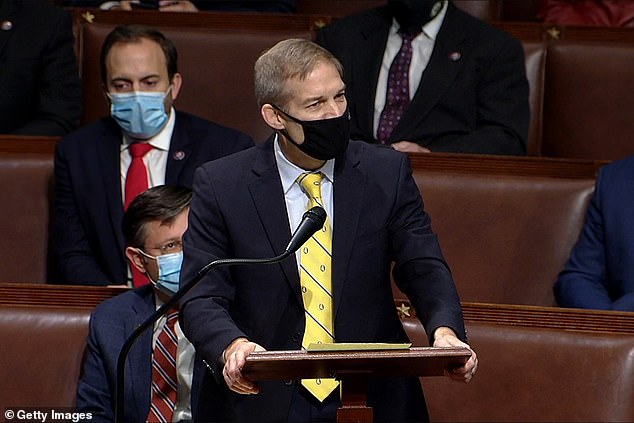 Jordan, speaking here on Jan. 6 to reject Electoral College votes in some swing states, has supported Trump’s claims the 2020 election was illegitimate due to a slew of voter fraud

Jordan’s office did not immediately respond to a DailyMail.com request for comment on the reported interaction with Cheney.

The Washington Post reporters Philip Rucker and Carol Leonnig’s book will officially be released on July 20, but excerpts have started coming out from those who have obtained parts early.

The latest is a series of books coming out this summer about the former president’s time in office – and in particular his final days in the White House, including the Capitol riot and his handling of the coronavirus pandemic.

Democrats blamed Trump for the Capitol attack on January 6, 2021 as his supporters stormed the comple to try and stop members from certifying the election win for Joe Biden. 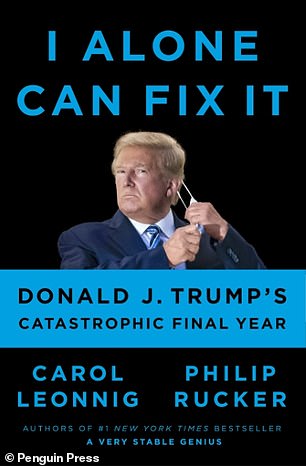 The excerpts were taken from a  new book due out next week titled I Alone Can Fix It: Donald J. Trump’s Catastrophic Final Year

Shortly after, the House voted to impeach the then-president again, this time on grounds of ‘inciting insurrection.’ Cheney was the highest ranking Republican of the 14 who voted for Trump’s second impeachment.

Months later, in May she was voted out as Republican Caucus chairwoman and was replaced with New York Representative Elise Stefanik, who while has a less conservative voting record, is more pro-Trump and did not vote to impeach him.

Cheney was recently the only Republican that Democratic House Speaker Nancy Pelosi appointed to the select committee investigating the events of January 6 – further distinguishing herself from the current state of the GOP.

In contrast to Cheney, Jordan is one of the former president’s most fervent supporters in Congress.

Following the 2020 election, the Ohio representative pushed Trump’s claims that there was a slew of voter fraud and, therefore, the election results are illegitimate.