She’s the former topless waitress that paid tribute to her convicted drug-trafficker boyfriend in August.

But her beau was nowhere to be seen on Monday, as Cheryl Maitland took to Instagram to flaunt her ample cleavage while promoting fellow Gold Coast resident Tegan Woodford’s new makeup e-book.

The 26-year-old posed for her 154,000 strong followers, as she promoted the new release from the cosmetic artist.

‘Monday spent doing one of the looks from @teganwoodfordmakeup new MAKE-UP e-book,’ she captioned.

‘From skincare to contouring to smokey eyes, this book has you covered.’

The Married At First Sight star appeared topless with the camera angled up from her cosmetically altered chest, while she flirtatiously stared into the lens.

Showing the result of a make-up filled day session, she opted for a smokey-eye look while she grabbed her smooth brown locks with one hand as they fell effortlessly over her shoulders.

Her silky skin showed no imperfections, as the heavily applied make up left her complexion shining from the natural light.

The busty brunette also made use of her public profile to tell her fans to use her discount code ‘Cheryl’ when buying the book online.

Cheryl has been making headlines of late, following revelations about her boyfriend 30 year old Dean Gibbs’ troubled past. 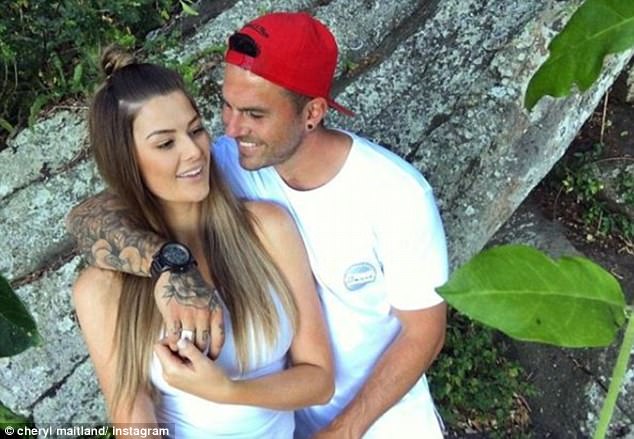 ‘I am so glad I never settled ’til I found you’: In August, Married At First Sight’s Cheryl Maitland paid a romantic tribute to her convicted drug trafficker boyfriend Dean Gibbs

‘I am so glad that I never settled till I found you,’ she wrote on Instagram, alongside a photo that showed her and Dean cuddling in the woods.

Dean was arrested and handed a one-year suspended jail sentence in 2014 after pleading guilty to trafficking and using cocaine, as well as possessing steroids and ecstasy.