A woman who piled on four stone thanks to an unhealthy diet at university has dropped the weight – and revealed her impressively toned physique – by making some very simple substitutes in her diet.

Emily Moore, 22, who hit 14st at her heaviest, was prompted to shake up her diet and fitness before she started a full-time office job in Cheshire after finishing university.

She has since shed 4st 5lbs, bringing her down to 10st, and even developed a six-pack thanks to smart food swaps and regular workouts.

Emily shared some of her simple swaps – including replacing calorific cocktails with gin and tonic and lattes with creamy protein shakes – with Femail.

Student Emily Moore, 22, piled on four stone at university, left, due to an unhealthy diet and binge eating. She has since displayed her amazing transformation, right, after making some simple swaps to her diet 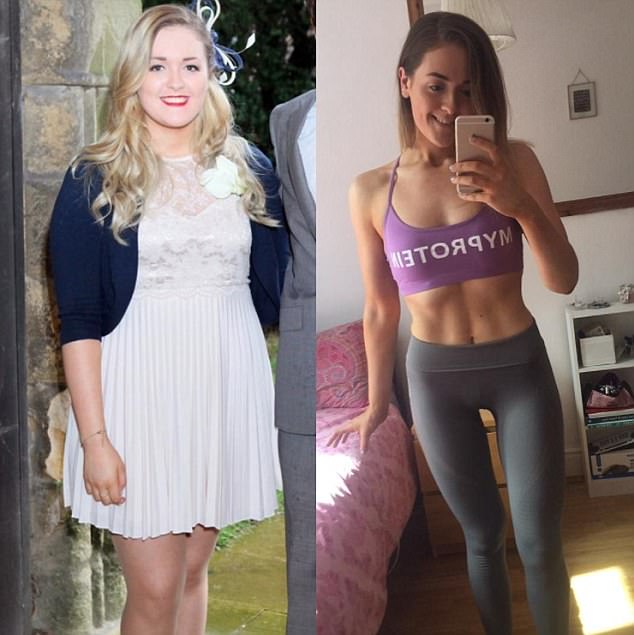 Emily was prompted to shake up her diet and fitness before she started a full-time office job in Cheshire after university and took up a mostly plant-based diet to achieve her new figure, right

She said: ‘It’s all about swapping the high sugar and fat foods for alternatives.

‘I read up and started to get really savvy, so instead of going to the convenience store and buying a flapjack, which I thought was healthy, I bought a box of protein flapjacks.

‘Another thing I did was start swapping my calorific morning lattes and cappuccinos for protein shakes, which had only 100 calories and the 20grams of protein helped my muscles recover after my workouts. Then I swapped my cocktails for gin and tonics or vodka sodas and I did reduce my drinking quite substantially.’

I worked at a pub, which caused me to pile on the pounds, so got 50% off on my shifts and I worked at least 4 days a week!) I thought as I was on my feet running around for hours it was okay to gorge out on high calorie burgers

Cocktails and high calorie mixers like juice and coke

Veggie based meals as they’re low calorie but volumes and filling, so I tend to make burrito bowls full of veg

On weekends I love to make My Protein pancakes and flavor them with the sugar free syrups. I aim for high volume low calorie meals as I like to be able to eat more 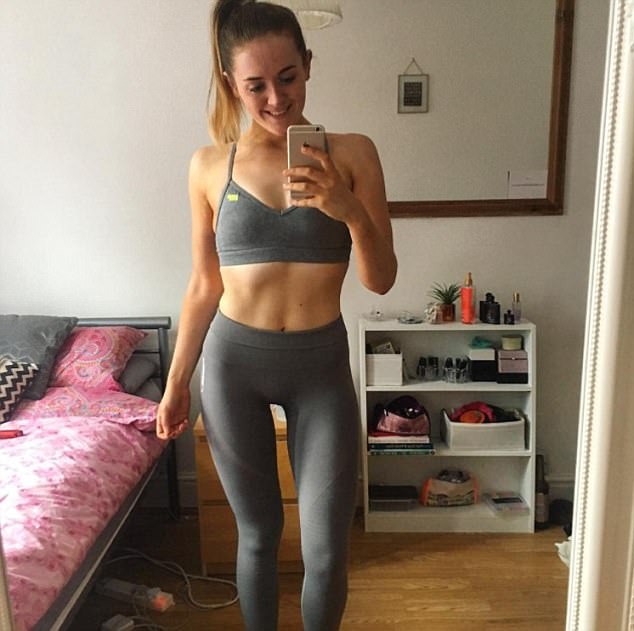 Emily dropped 4st 5lbs, bringing her down to 10st, and crafted a six-pack thanks to her new lifestyle 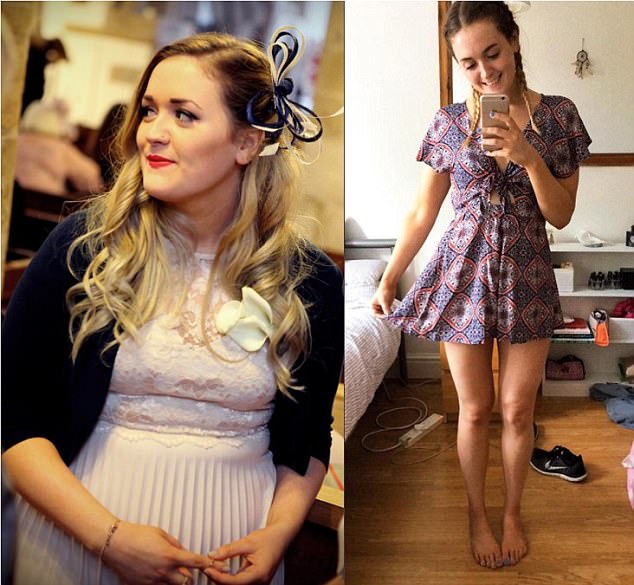 Discussing her new lifestyle, Emil said it’s all about swapping the high sugar and fat foods for alternatives 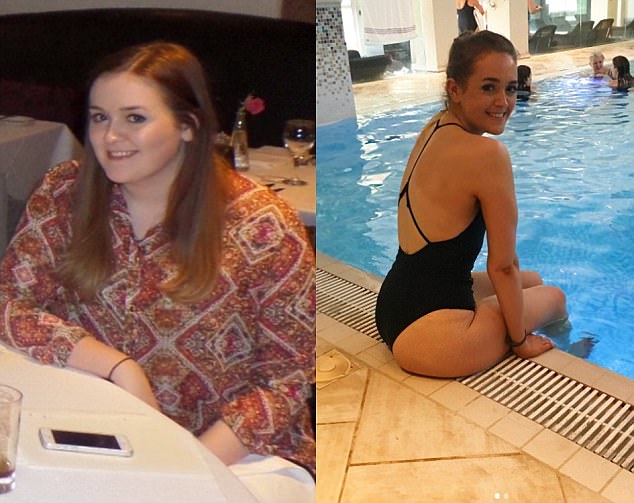 Instead of going to the convenience store and buying a flapjack, which she thought was healthy, she bought a box of protein flapjacks and snacked on them after workouts

Hoping to save money as well as dropping the pounds, Emily switched to an almost entirely vegetarian/vegan based meal plan.

Some of her favourite meals include burrito bowls full of vegetables , rice cakes or corn cakes with peanut butter. On weekends she would swap fry ups for protein pancakes and flavour them with sugar free syrups.

Example of a legs and bum workout would be three rounds of this:

x10 Close Stance Squats (put your feet quite far forward so it’s a sitting motion, to really get that booty burn)

Discussing her new diet, she said: ‘I aim for high volume low calorie meals as I like to be able to eat more, so veggies are a great option and it’s better for the environment. There are so many options now that you can be entirely vegan but still build muscle by consuming plant based proteins.’

She complemented her healthy new diet with a workout regime, explaining that she started off with cardio and basic resistance machines then adopted weights and heavy lifting.

‘I learnt that lifting heavy doesn’t make you bulky, manly or unfeminine,’ she said. ‘It has given me curves that I didn’t know I had and has made me feel more feminine than ever because lifting weights help you sculpt your body.’

Emily, who tries to train four times a week, cites her favourite exercises as deadlifts, squats and overhead presses, but switches up her workouts to make sure her muscles don’t fatigue. ‘So,’ she explained, ‘one day I’ll do bum and legs, then I’ll do chest, shoulders and arms.’ 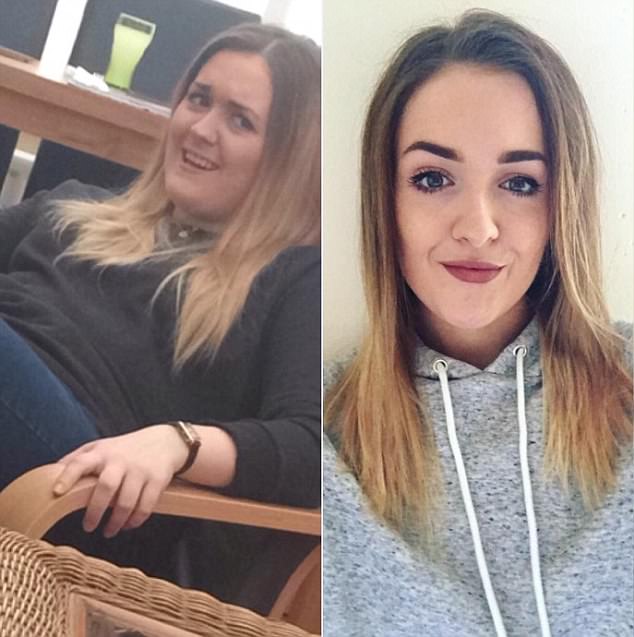 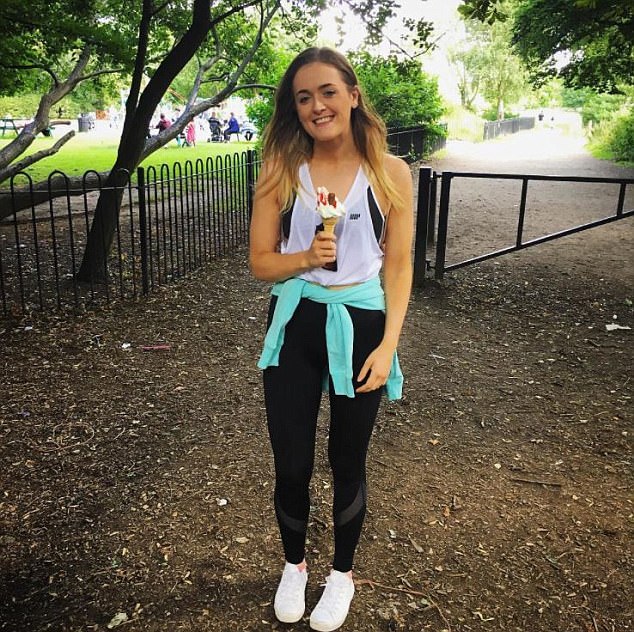 On weekends she loves to make My Protein pancakes and flavor them with the sugar free syrups. ‘I aim for high volume low calorie meals as I like to be able to eat more,’ she added