The world of elite chess has been engulfed in a cheating scandal after a picture emerged of a top grandmaster sat on a toilet using a mobile phone during a tournament.

Police are investigating after Igors Rausis, who has represented Latvia, Bangladesh and the Czech Republic, was caught ‘red-handed’ in France, the game’s governing body Fide said.

Phones are banned at chess tournaments because of chess software that can be used to suggest winning moves.

Rausis, aged 58, had aroused suspicion by reaching the game’s top echelon at an age most players decline in strength.

The former Latvian champion was hailed as an inspiration to older players as he climbed from a Fide rating of around 2500 – the level of an average grandmaster – to the verge of 2700 in six years.

Having a check, mate? Chess grandmaster Igors Rausis sits on the toilet looking at his phone – in a picture which chess officials say is evidence he was cheating

Rausis also became the oldest player in the Top 100, reaching number 40 in the live rankings list.

When he broke into the top 100 last year he was lauded as an example of how advancing age need not be a barrier to improvement in chess.

However, his jump in middle age to the level of ‘Super’ grandmaster was unprecedented in a game dominated by younger stars and this led to some whispers of suspicion.

Grandmaster Danny Gormally, a former England international, said today: ‘It is amazing Rausis wasn’t stopped earlier. Seems completely naive to me that people think that someone can improve that much in their fifties.’

Just last week, one player posted on a chess forum saying there was a ‘story rumbling around’ about how Rausis had been ‘hacking the system’.

Officials from Fide had also heard rumours and appear to have been lying in wait for him at the Strasbourg Open in France.

Chess players can use powerful ‘engine’ apps on smartphones, such as the popular Chessbase app, to analyse games and find moves suggested by a computer. 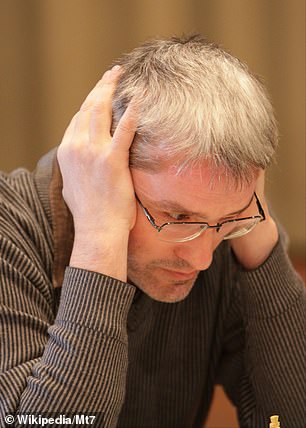 Sudden improvement: Rausis (pictured) had aroused suspicion with a surge in performance in middle age

As a result, the use of phones is banned at such tournaments and even being in possession of one can lead to disqualification.

It is unclear whether Rausis was using such an app, but the use of a hidden phone is banned in itself.

According to chess.com, Rausis later signed a declaration saying that a phone found in a toilet cubicle was his.

‘I simply lost my mind yesterday. I confirmed the fact of using my phone during the game by written [statement].

‘What could I say more? Yes, I was tired after the morning game and all the Facebook activity of accusers also have a known impact. At least what I committed yesterday is a good lesson, not for me – I played my last game of chess already.’

Garrett said: ‘Trust me, the guy didn’t stand a chance from the moment I knew about the incident: FPC knows how to protect chess if given the chance.

‘The final result is finding a phone in the toilet and also finding its owner.

‘Now the incident will follow the regular procedure and a trial will follow to establish what really happened.’

FIDE Director General Emil Sutovsky said on Facebook: ‘Igors Rausis has been caught red-handed at a tournament in Strasbourg.

‘I thank Yuri Garrett and Laurent Freyd, who took charge of catching the long-suspected player, and also the tournament arbiters, for carefully following all the guidelines.

‘Rausis has been suspended from the tournament and all the materials will be sent to the Ethics Commission. In parallel, the matter will be dealt with by the French Police.

‘Ten days ago I wrote that I wouldn’t recommend that anyone cheat. The capture of Rausis is only the beginning. FIDE has fundamentally toughened its attitude.

‘Completely rooting out cheating is impossible, but the risk of being caught has significantly increased, and the punishments will become much more significant.

‘The war against cheating will last years, and we’re in it for the long haul.’