A Chicago Fire Department diver looking for a man who fell off a boat into the Chicago River on Monday night was separated from his partner underwater and was killed.

The city agency said that its ‘prayers go out to the family of Firefighter Juan Bucio.’ It said on Twitter that Bucio ‘tragically passed away answering a call of a person in the water.’

Alberto Lopez, 28, fell off the boat near the 2600 block of South Ashland Avenue at around 8pm on Memorial Day, police said. 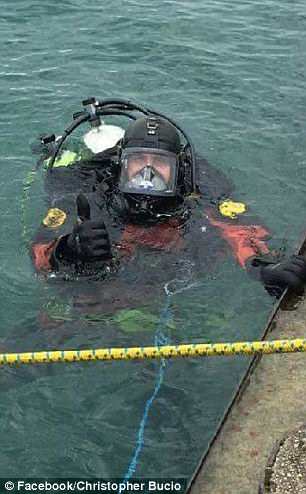 Fallen hero: Chicago Fire Department diver Juan Bucio, 46 (left and right), was killed in the line of duty on Monday while searching for a missing boater

Bucio was killed and two other divers were injured while searching for the boater in the river, which flows through downtown Chicago.

Bucio, 46, was in the water with a dive partner when the partner lost contact with him, fire Commissioner Jose Santiago said.

‘During the search, one of our divers became separated,’ he said. ‘Immediate search started with the backup divers.’

Bucio was pulled from the water at around 8.45pm and rushed to Stroger Hospital, where he was pronounced dead shortly after 10pm.

Lopez had not been located as of early Tuesday. The two other divers were hospitalized briefly.

Bucio joined the Chicago Fire Department in 2003 and became a member of its dive team in 2007. He had a wife and two children, sons ages seven and nine years old. 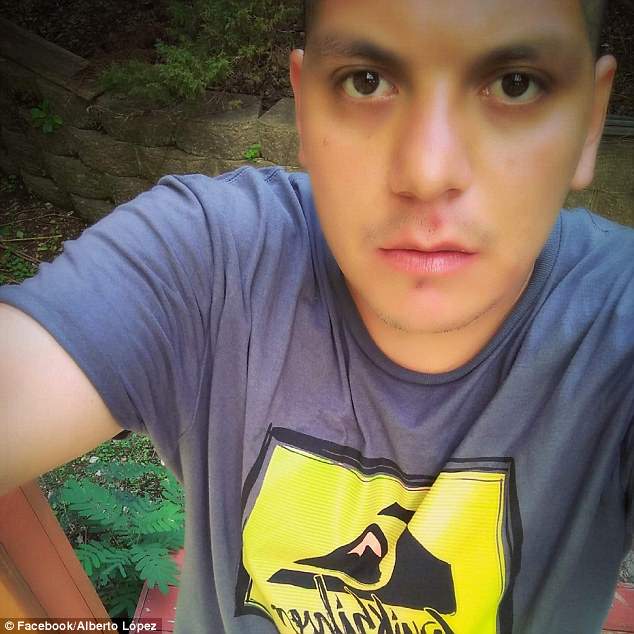 Still missing: Bucio and other divers were out looking for 28-year-old Alberto Lopez, who fell off a boat into the Chicago River on Memorial Day

He is also survived by nine siblings, including a brother at the fire department and a sister at the police department, Santiago said.

‘Please,’ Santiago said, ‘keep this family in your prayers.’

Chicago Mayor Rahm Emanuel released a statement on Tuesday, hailing Bucio as a ‘special type of person’ willing to risk his life to help others.

‘Our hearts are heavy tonight,’ Emanuel said. ‘When the call came for help, Juan Bucio was that special type of person who answered. He was dedicated to Chicago and committed to keeping us all safe. He will be missed, but his service and his selflessness will be remembered.’

Bucio is the 13th Chicago firefighter to die in the line of duty since 2000, according to data from the Illinois Fire Service Institute cited by the Chicago Tribune.