McEnany was answering reporter questions during a press briefing earlier Thursday when she made several sharp comments about the mayor and accused her of ‘doing a very poor job at securing her streets’.

The press secretary also said she believed Lightfoot should ask for federal help in ending a recent spike in violence in Chicago. 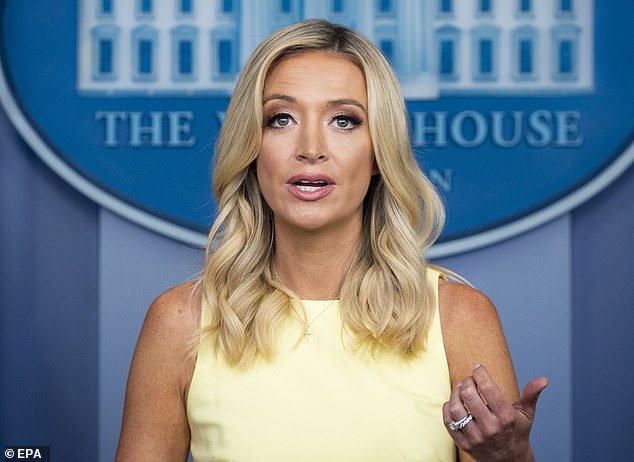 The mayor responded on Twitter shortly afterward by sharing a screen grab of Bennett’s tweet and adding, ‘Hey, Karen. Watch your mouth’.

The Democratic Mayor used the term Karen as the now common label used to refer to a demanding, middle-aged white woman showing a sense of entitlement and privilege.

According the Chicago Sun Times, a source confirmed that the mayor used the phrase in this context.

McEnany had referenced Lightfoot twice during the course of Thursday’s press conference, both times slamming the mayor for failing to stop violence in her city.

When asked about why the coronavirus pandemic wasn’t been given the President’s full attention, McEnany answered: ‘There are other things the president has to focus on – namely the democratic cities not taking control of their streets, namely the mayor of Chicago who has people dying on the streets of her city every weekend.

‘The president sent her a letter saying you must secure your city,’ she added.

McEnany was later asked about a previous comment made by Trump that white people are killed just as often as black people by police officers.

During the course of her answer, the press secretary again brought up recent violence in Chicago.

‘I’ve listed for you the names of these kids who have died across this country. It is unacceptable, and under this President, he’ll take action,’ she said.

‘And the derelict mayor of Chicago should step up and ask for federal help because she’s doing a very poor job at securing her streets.’

President Trump has targeted Mayor Lightfoot and Chicago as recently as Wednesday over its spike in violence.

‘We’ll have another announcement next week with the Attorney General, the FBI, and others concerning our cities, because the left-wing group of people that are running our cities are not doing the job that they’re supposed to be doing,’ Trump said. 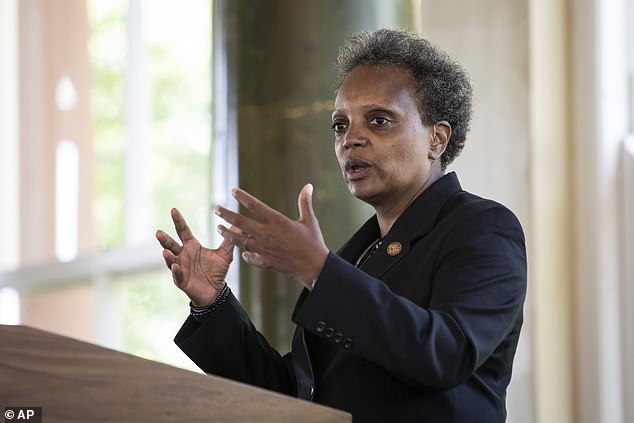 Trump has targeted Mayor Lightfoot, pictured, in recent weeks over violence in Chicago 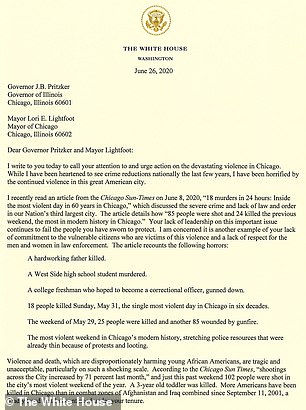 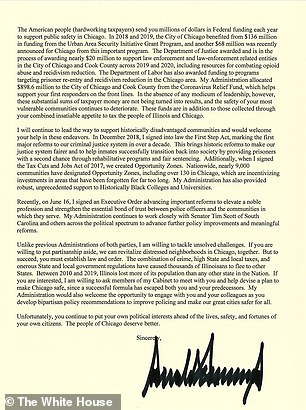 Trump’s letter to Chicago Mayor Lori Lightfoot and Illinois Governor J.B. Pritzker. The president’s letter had a lengthy description of how the federal government has provided financial assistance to help Chicago fight crime as he called on Mayor Lightfoot to ask for help

‘And it’s not a very tough job to do if they knew what they were doing. So we’ll be talking about that next week and probably have an announcement as to what we’re planning to do to help them. They’re supposed to be asking for help, and they don’t want to ask,’ he added, referring to Mayor Lightfoot and her refusal to call for federal aid.

Last month in a town hall with Fox News, he referred to living in Chicago as being ‘worse than Afghanistan’.

In June he also sent a letter to Mayor Lightfoot, as well as Illinois Governor J.B. Pritzker, calling on them to ‘urge action on the devastating violence in Chicago’ and asking them to call him.

‘Your lack of leadership on this important issue continues to fail the people you have sworn to protect,’ the letter read.

‘I am concerned it is another example of your lack of commitment to the vulnerable citizens who are victims of this violence and a lack of respect for the men and women in law enforcement.’

Neither responded to the letter.

According to NBC Chicago, there were at least 60 shootings in the city over this past weekend, including 13 deadly incidents.