Chicago Mayor Rahm Emanuel choked up and wiped away tears during his eulogy for Eduardo Marmolejo, 36, one of two police officers who were struck and killed by a commuter train while chasing a man who allegedly fired a gun.

‘He wanted to be a hero to his family,’ the Mayor said. ‘He became a hero to our city.’

‘I did not know Lalo (Marmalejo’s nickname) ersonally,’ Emanuel continued. ‘I wish I had.

‘But I know the love and loyalty he inspired in his family and friends.

‘And I know the legacy he will leave behind.’ 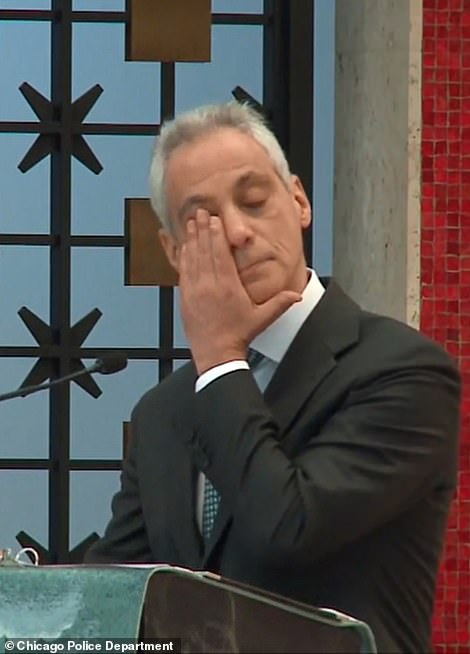 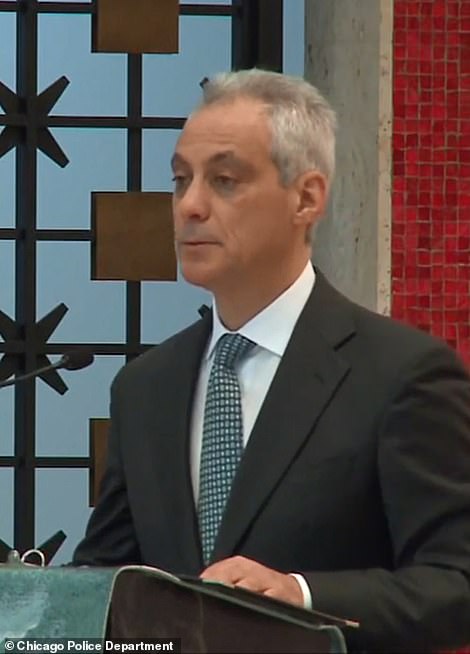 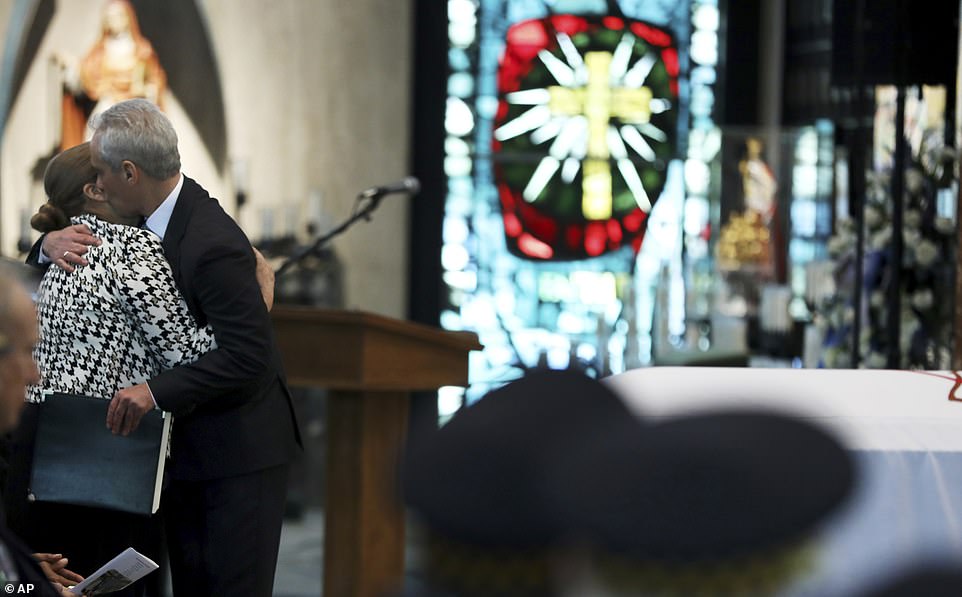 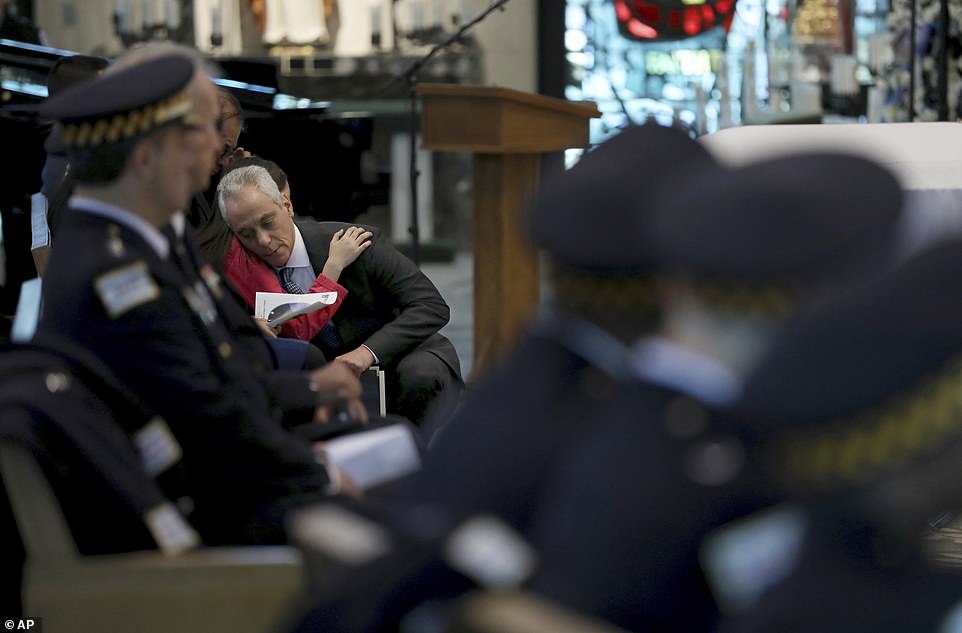 Marmolejo is survived by his wife and three daughters. He was 36 years old

Emanuel then turned to Marmolejo’s family.

‘Maria, Becca, Madeline, and Sophia – we will always be here for you.

‘We will always cherish Eduardo’s memory.

‘We will always honor the journey of the Marmolejo family who came to America, came to the city of Chicago, to find and build a better life.

‘And you have helped Chicago become a better city.’

Marmolejo, son of Mexican immigrants, is survived by his wife and three daughters. 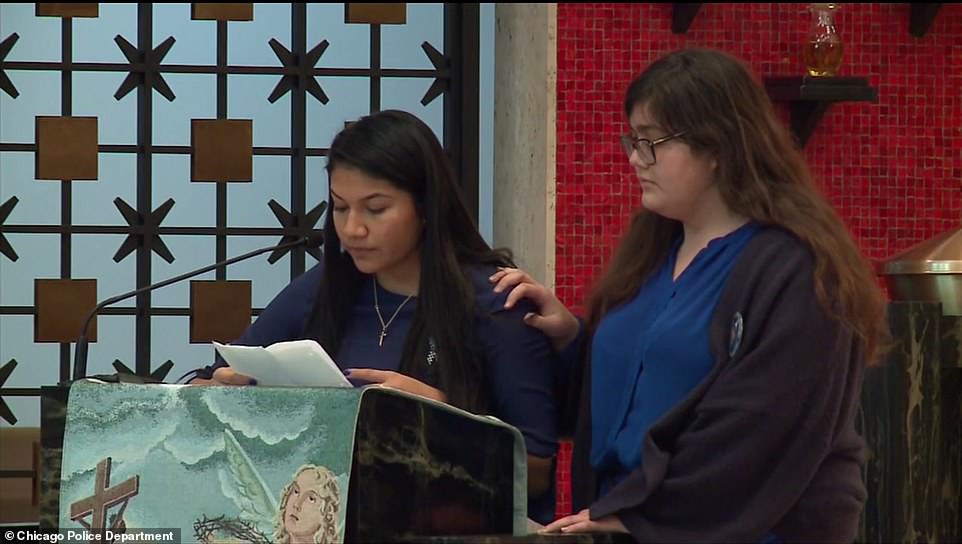 Rebecca Marmolejo (left), 15, also delivered a eulogy at her father’s funeral service on Chicago’s South Side on Saturday 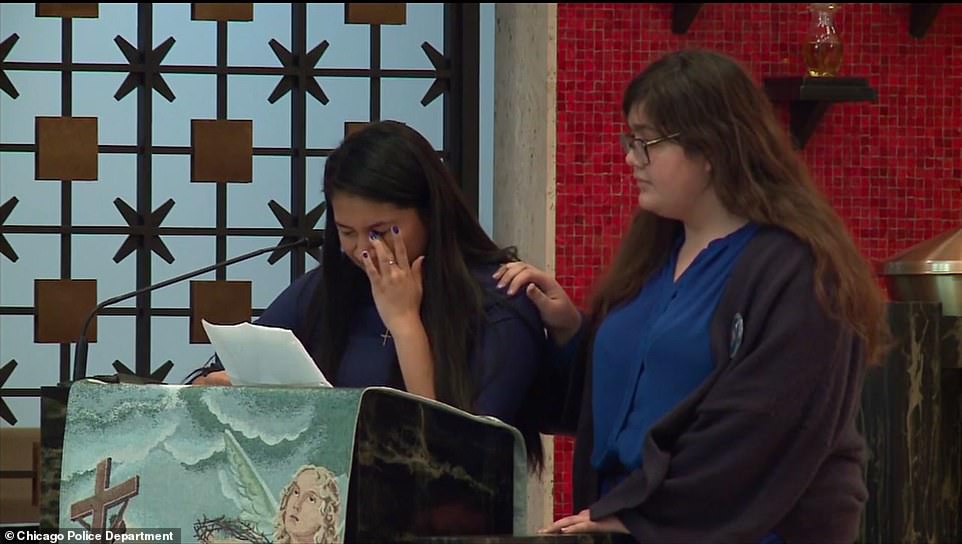 ‘Now that you clocked out, it’s my turn to cover the shift,’ Rebeca Marmolejo said. ‘You will always be my hero, my best friend, and my dad’ 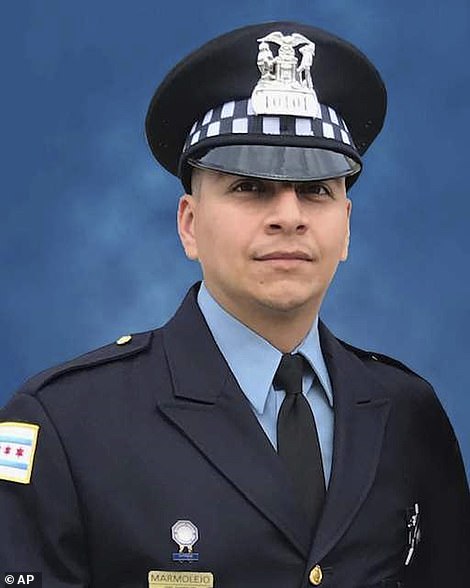 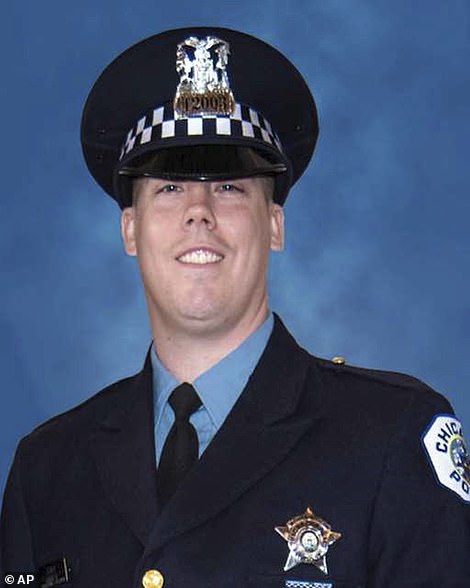 Marmolejo (left) and another officer, Conrad Gary (right), 31, were fatally hit by a train on Monday night while responding to reports of gunshots

‘Your husband’s remarkable life and legacy will endure through your three incredible girls,’ Emanuel said.

‘I miss you so much. I cannot tell you how many times I’ve cried just thinking of you,’ she said while shedding tears and growing emotional. 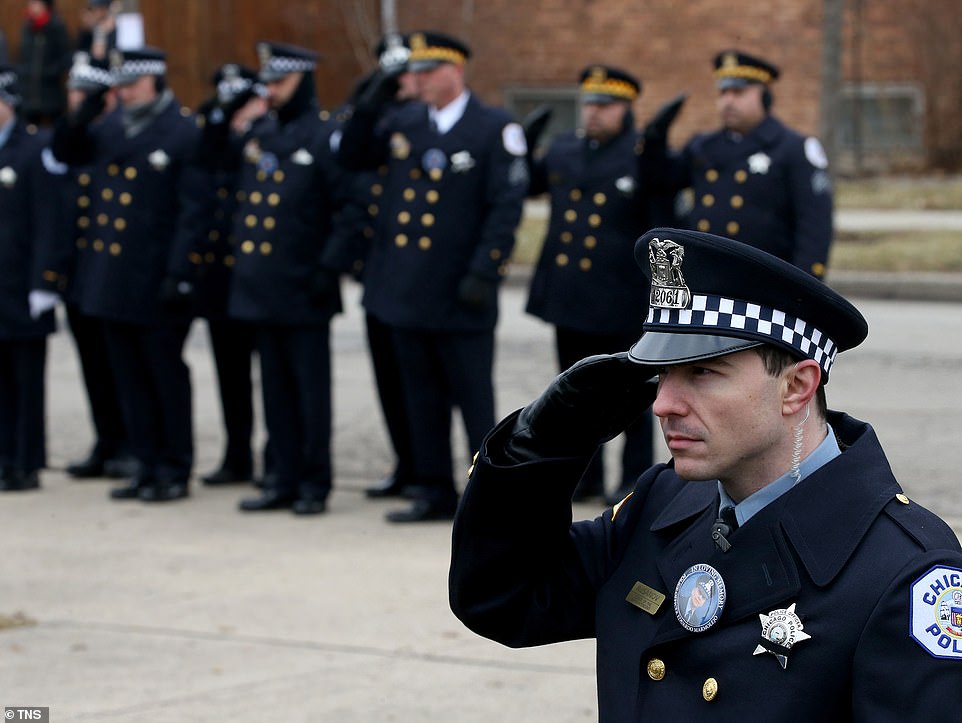 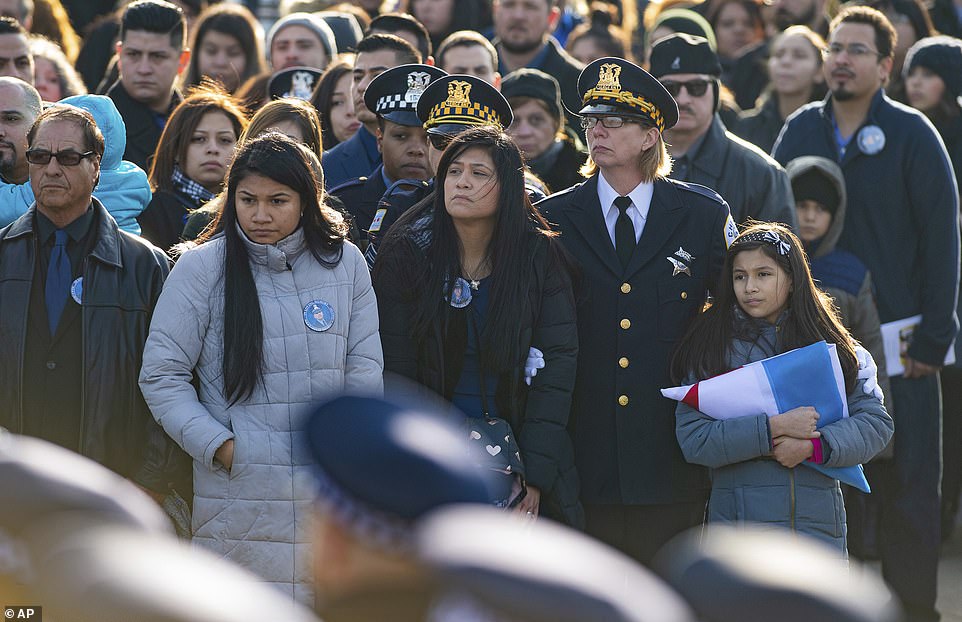 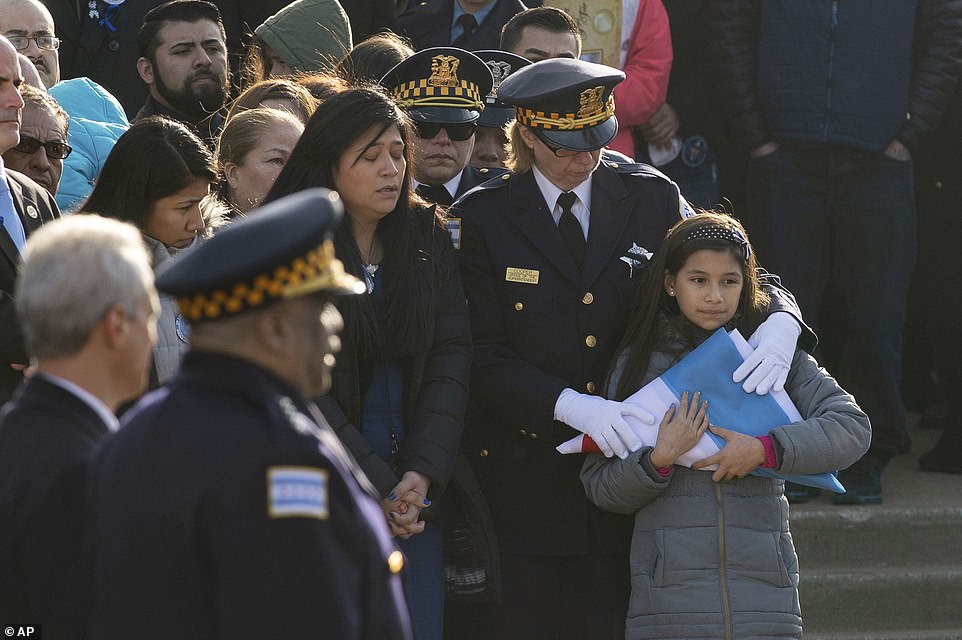 Marmolejo’s daughter Madeleine (far right), 9, holds a folded Chicago flag as she is embraced by a police officer as her mother, Maria, looks on. Rebecca, the oldest daughter, is seen far left 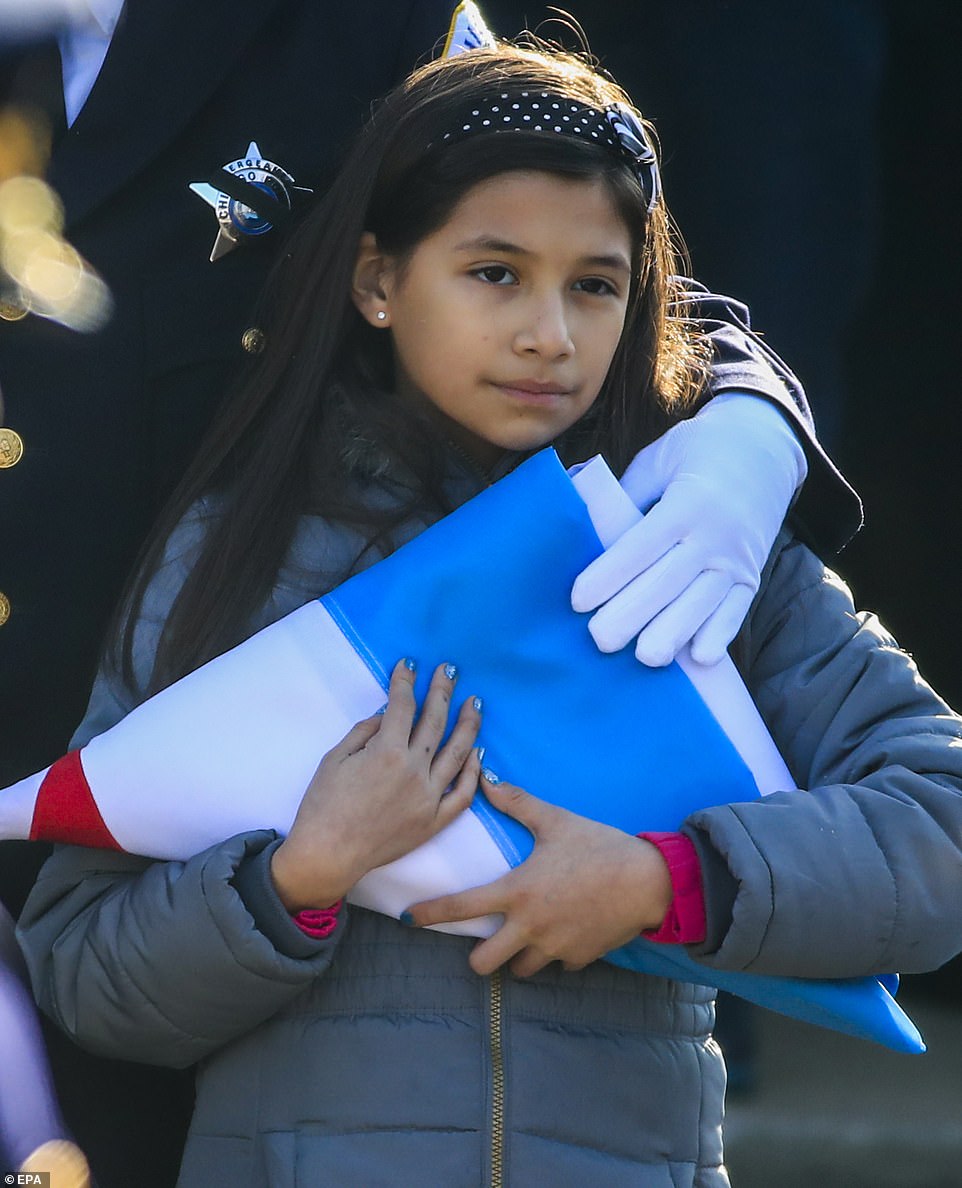 A GoFundMe page has been set up to help the Marmalejo family. So far, it has raised more than $60,000 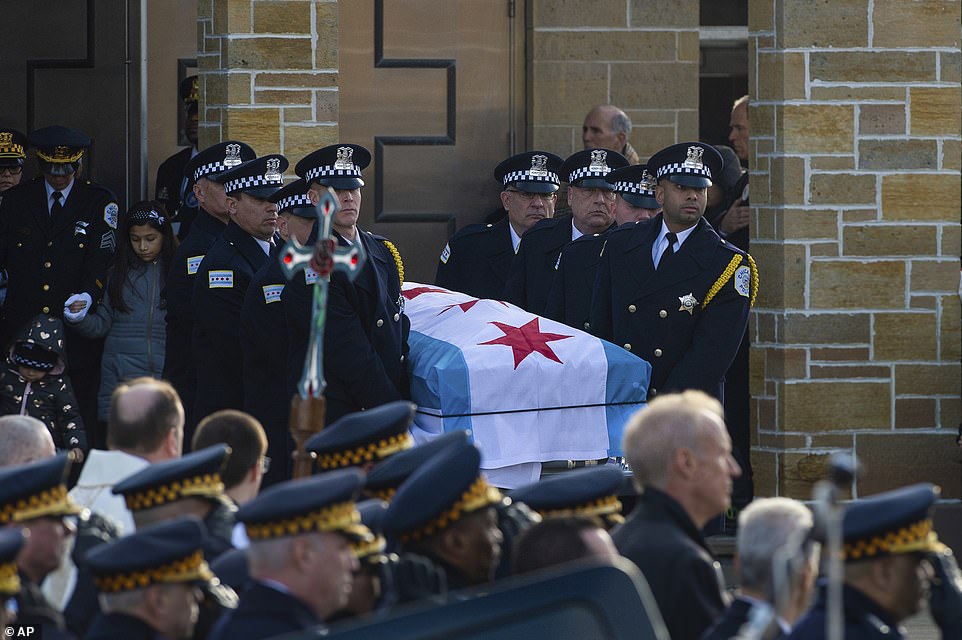 Pall bearers are seen above carrying the remains of Marmolejo out of St. Rita’s Church on Saturday

‘I have so much to say and now there’s no time. I never knew what getting my heart broken felt like until now.

‘Knowing that I’ll never get to hug or even see you again breaks my heart into a million pieces.

‘There’s no one else like you. I love you more than all the stars in the sky.’

Rebecca then told those in attendance: ‘Please, when you go home, hug everyone that means something to you.

‘Tell them you love them, because in the end it isn’t worth knowing you could’ve given more time and love and effort into that person.’

‘You will not be alone this Christmas, next Christmas, or the Christmas after that. 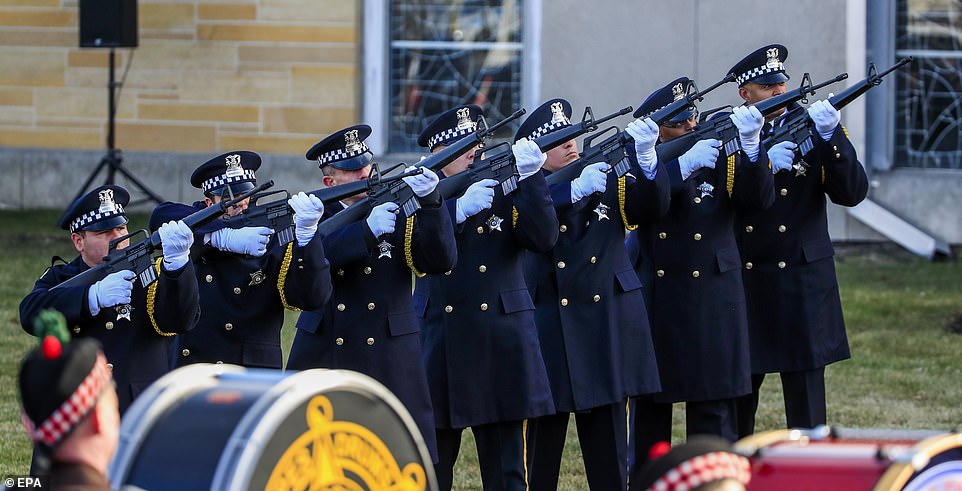 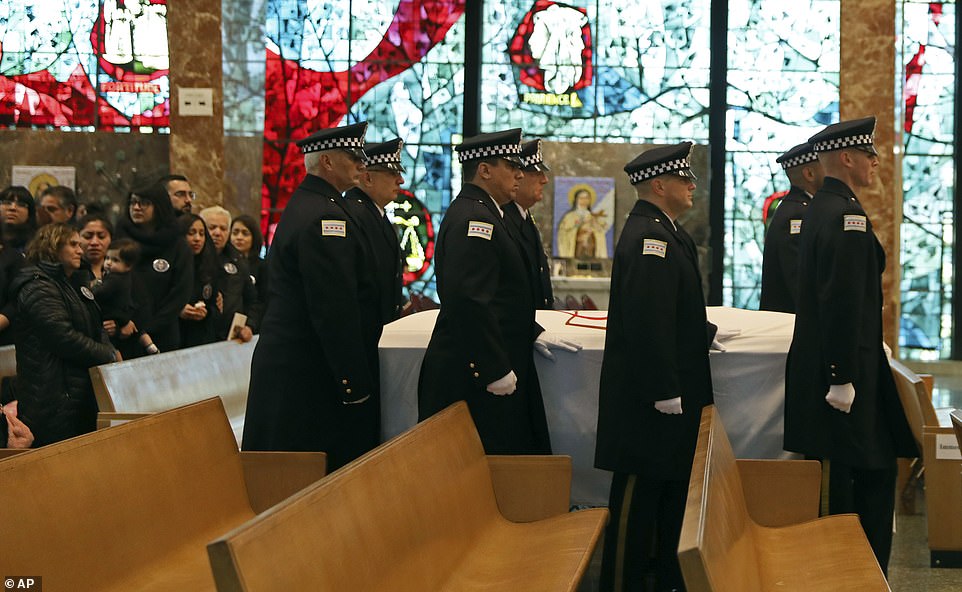 Eduardo Marmolejo’s casket is seen above arriving at the St. Rita of Cascia Shrine Chapel on Saturday 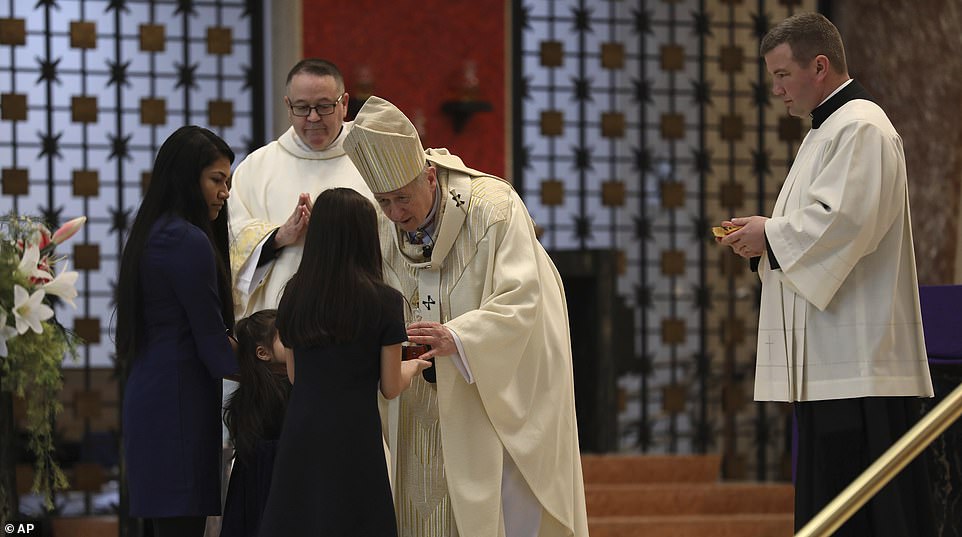 The most senior Catholic official in Chicago, Cardinal Blase Cupich (center), led the funeral mass for Marmolejo. He is seen above greeting the fallen officer’s children 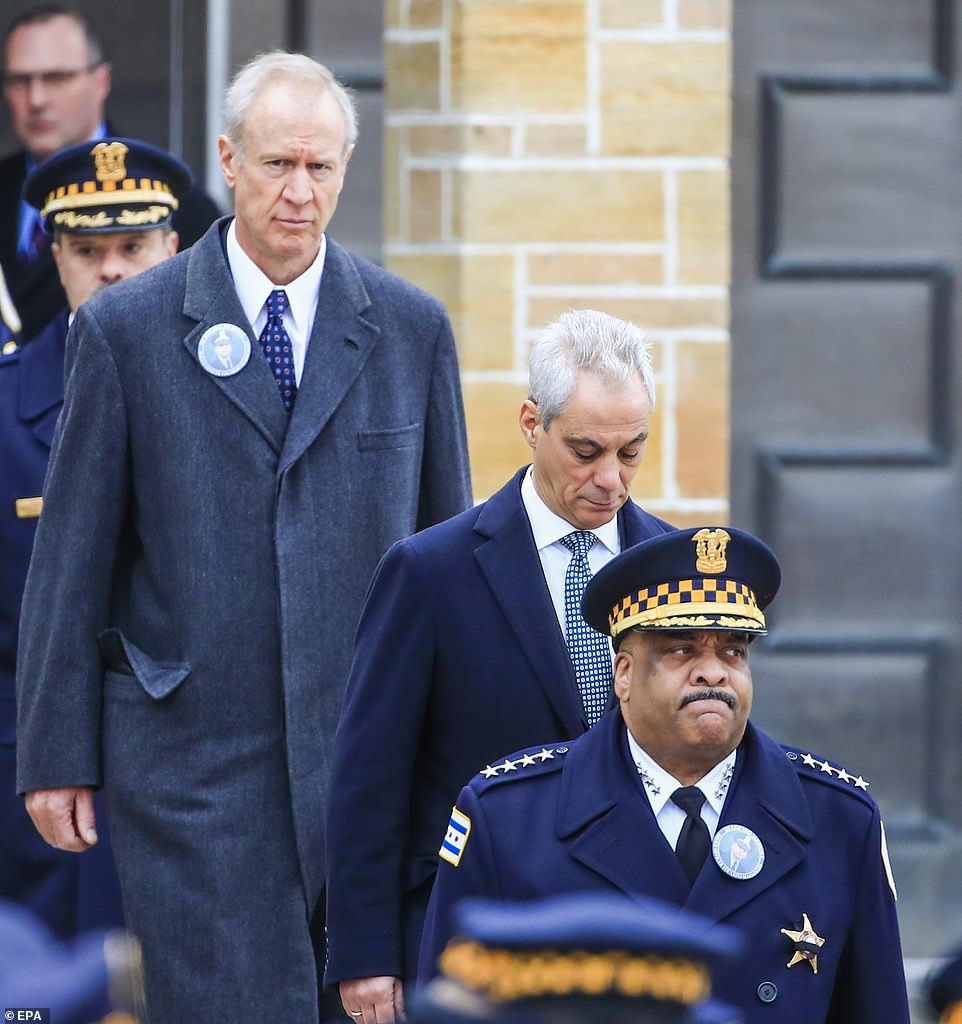 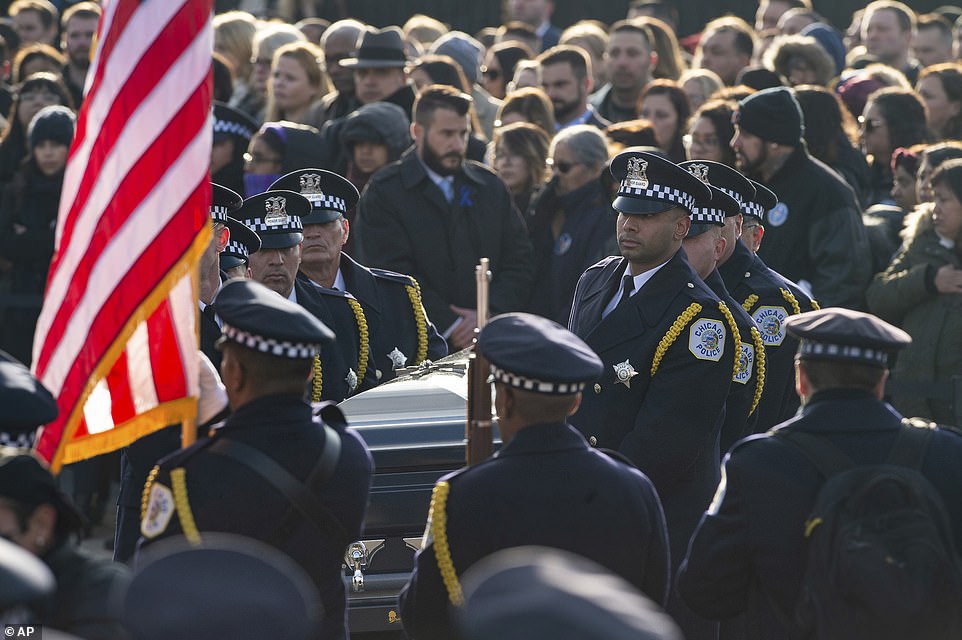 This was the second funeral for a fallen police officer to be held in as many days in Chicago. Gary’s funeral was held on Friday 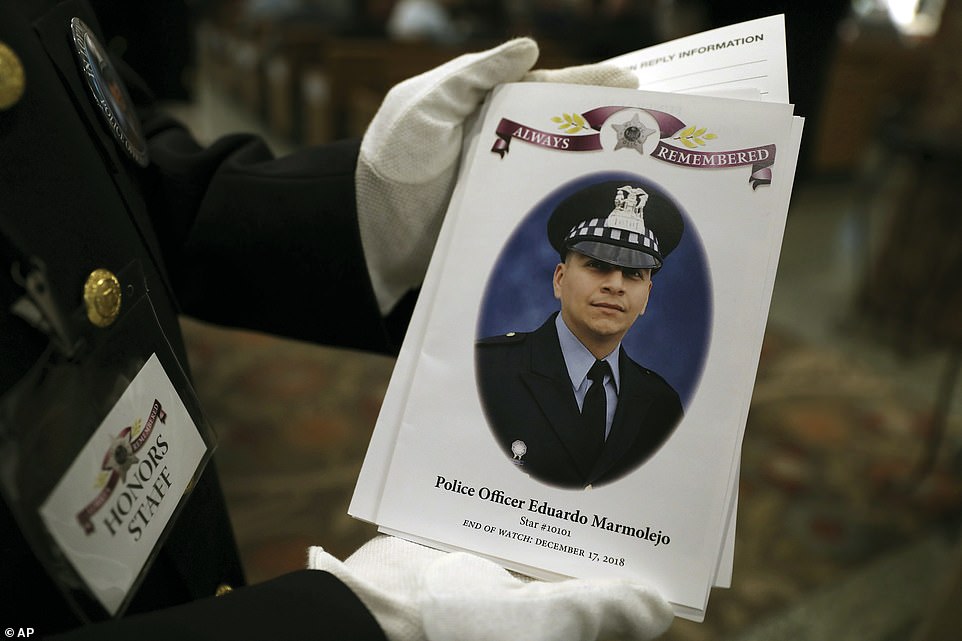 Officers prepare for the funeral of Marmolejo. Programs were handed out to those who attended the service

A GoFundMe crowdfunding campaign was started to help the family with funeral expenses and other needs. So far the campaign has raised more than $63,000.

This was the second funeral for a fallen police officer to be held in as many days in Chicago.

On Friday, Emanuel, Illinois Governor Bruce Rauner, and Johnson eulogized Conrad Gary, 31, who was with Marmolejo when they were both struck and killed by an elevated train on the city’s far South Side on Monday night.

Police say the officers may not have seen or heard the train that hit them because they were watching another train coming from the opposite direction.

Marmolejo and Gary were pursuing Edward Brown, a 24-year-old resident of Chicago.

Brown on Wednesday was charged with aggravated unlawful use of a weapon and reckless discharge of a firearm.

As the officers were chasing Brown, they were hit by a train just after 6pm, Johnson said. 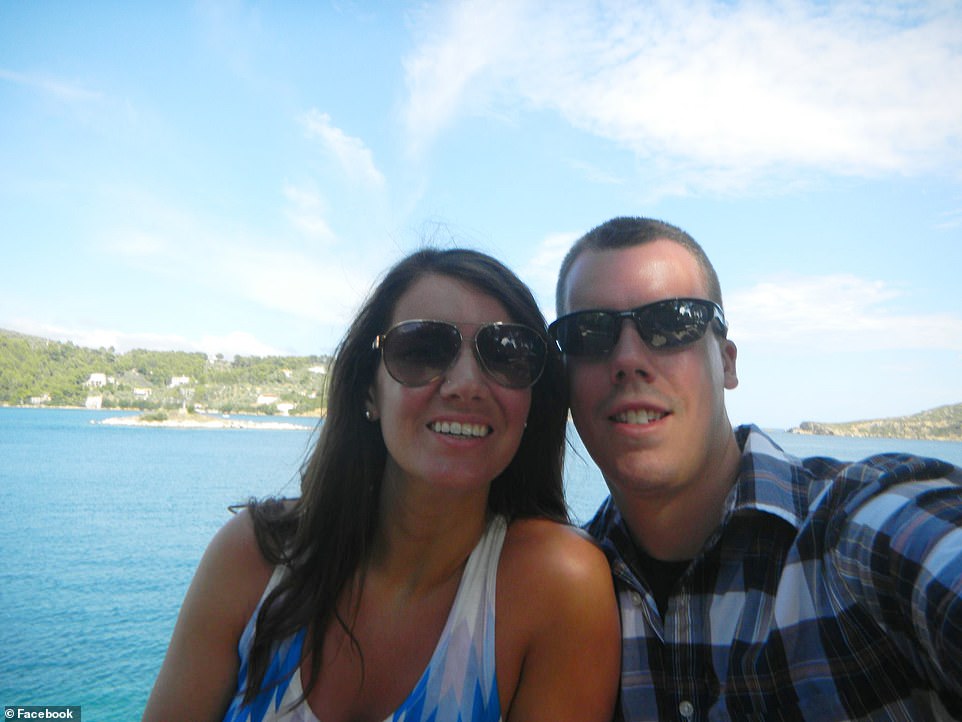 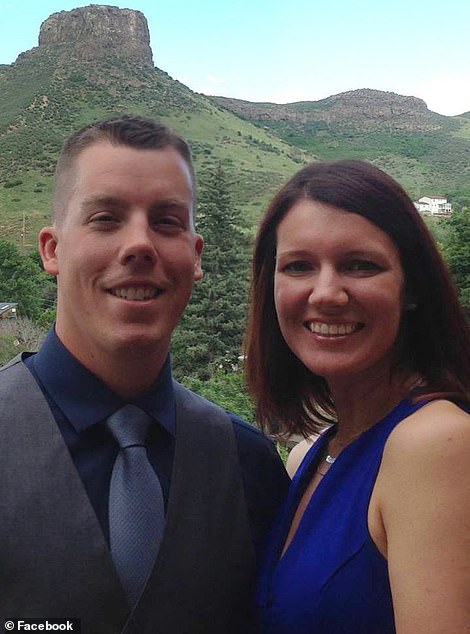 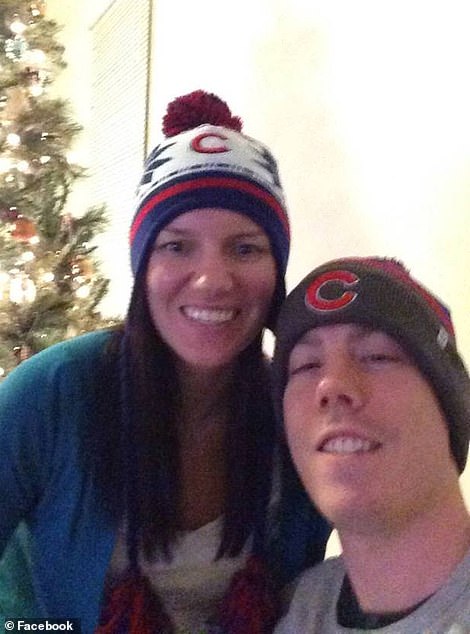 Gary graduated from Eastern Illinois, then served five years in the Air Force but returned to Chicago to be closer to his family and join Chicago Police Department

He added that the vehicle was going at a high speed when the law enforcement officers were killed.

‘There was no stop at that location so the train was probably going somewhere between 60 and 70 miles per hour,’ Johnson said during a news conference on Wednesday.

Marmolejo had been with the department for two-and-a-half years and Gary for 18 months, Johnson said.

Chicago police use ‘ShotSpotter’ technology, or sensors that monitor for the sound of gunfire and alert police.

Johnson said the two officers went to the scene Monday after a ‘ShotSpotter’ alert went out.

‘It just highlights again how dangerous this job can be. I often say that the most dangerous thing a police officer can do is take a weapon off of an armed individual,’ Johnson said.

The train that struck the officers was operated by a commuter rail line that links northern Indiana and Chicago, according to media reports. 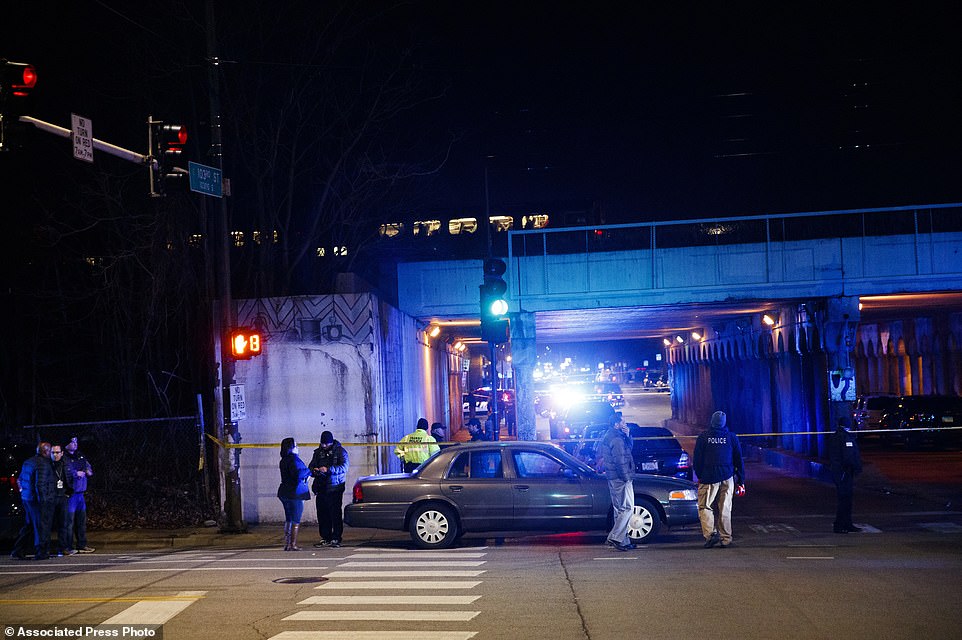 Police investigate the scene where the two officers were killed after they were struck by a South Shore train near 103rd Street and Dauphin Avenue on Monday in Chicago, Illinois 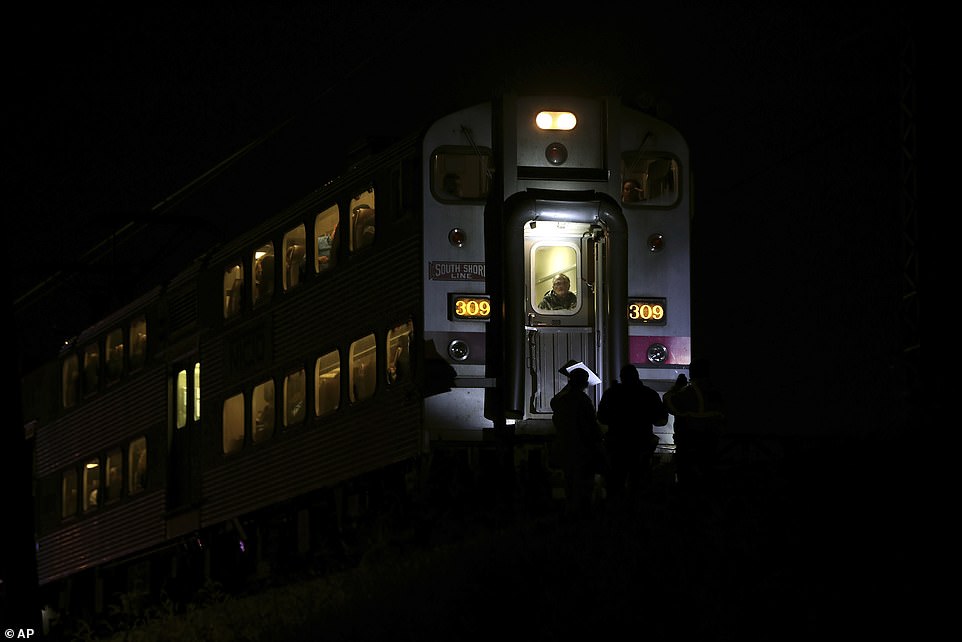 They were struck by a train that ‘was probably going somewhere between 60 and 70 miles per hour,’ police said 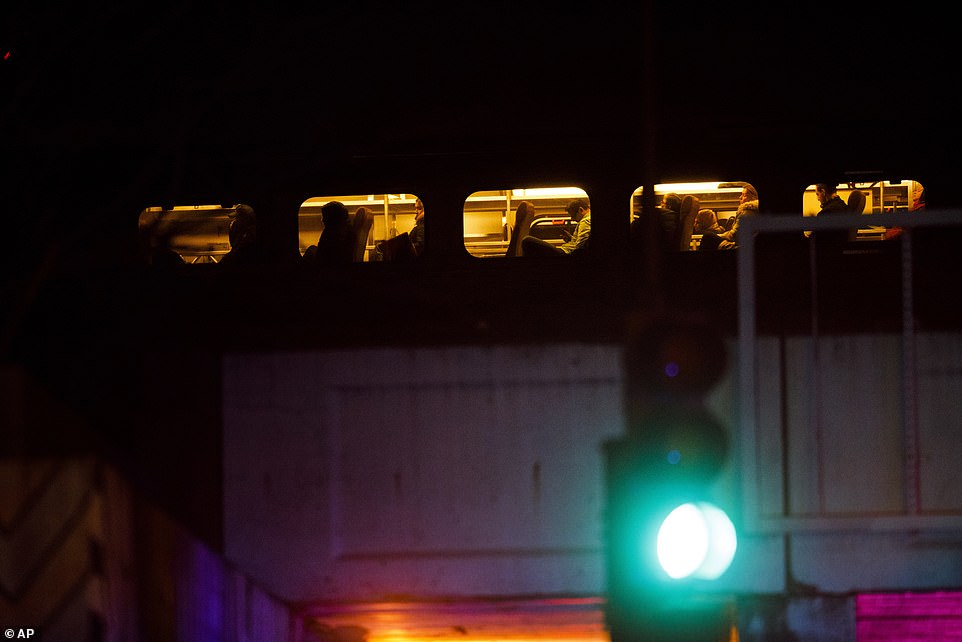 The attorney Brown said on Thursday he happened upon a fanny pack containing a gun and ammunition accidentally.

Attorney Frank Kostouros told a judge at Brown’s bond hearing Thursday that his client wasn’t out looking for a gun but saw the fanny pack and ‘curiosity got the best of him.’

Kostouros says Brown went to the tracks to fire the gun as a safety precaution.

He says Brown ‘thought he was doing something safe.’

‘Had he just gone to the next garbage can over, this never would have happened,’ Kostouros said.

The attorney said Brown is a ‘good kid who made a bad mistake.’

Kostouros added that while Brown feels guilty about what happened to the officers, he should not be held legally responsible.

‘What happened to these officers was completely unforeseeable, the series of events that set this off … it’s crazy to even think about,’ he said. 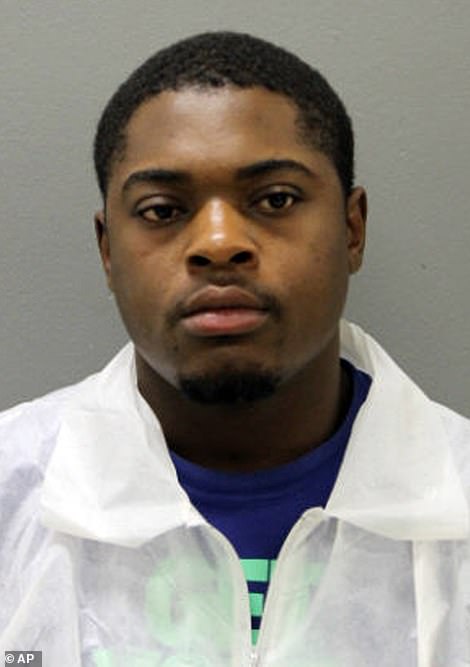 Chicago police said Wednesday that Edward Brown, 24, (above) of Chicago, has been charged. He was ordered held on $200,000 bond

Brown, who has no criminal record, was ordered held on $200,000 bond. He is currently behind bars at Cook County jail.

During the hearing, Assistant State’s Attorney Guy Lisuzzo said Brown was coming home from work and had gotten off a train when he went into an alley and found a fanny pack.

Lisuzzo says Brown looked inside, saw a gun and ammunition, and took it home.

He later went to the tracks to shoot the gun, firing it twice — once in the air and once at a school building that was not in session.

Police later located the owner of the gun, who told them that he dropped his fanny pack while taking out the garbage.

If Brown is convicted, he faces a possible prison term of one to three years.

Brown told police he didn’t know officers were looking for him.

Police spokesman Anthony Guglielmi said Thursday that Brown told detectives he’d found a gun and had taken it to a remote area near the train tracks to see if it worked Monday evening.

Guglielmi says detectives believe Brown, who was stopped minutes later by other officers near a train station on the city’s South Side.

The union representing Chicago Police Department officers is demanding that Brown be indicted for felony murder.

‘The Fraternal Order of Police believes that felony murder charges should be pursued,’ the union told WGN-TV.

‘Cook County State’s Attorney Kimberly Foxx has an obligation to the families of these officers, the police, and the community to vigorously pursue the highest possible charges anytime an officer dies as a result of the criminal actions of an offender.’

In 2002, Chicago police officer Benjamin Perez was fatally struck by a commuter train while conducting surveillance on narcotics activity on the city’s West Side.

Marmolejo and Gary were the third and fourth Chicago police officers to die in the line of duty, according to ABC News.