Chicago police were suspicious of Jussie Smollett from the very START

Jussie Smollett, 36, is charged with filing a false police report, a Class 4 felony

New investigative details have revealed the clues that made Chicago cops suspicious of Jussie Smollett’s story from the very start.

After three weeks of investigation, police publicly announced on Wednesday that they believed Smollett had hoaxed the attack that he claimed was perpetrated by white men shouting racist and anti-gay slurs.

But details released from the Cook County State’s Attorney office show that even the first officers to respond to Smollett’s report of an attack on January 29 had reason to be suspicious.

‘Chicago Police Officers observed that Smollett had a rope draped around his neck,’ Risa Lanier, a Cook County State’s Attorney, wrote in the bond proffer.

‘This was captured on police body worn camera. Seconds later, Smollett asked police to shut off the cameras,’ she continued. 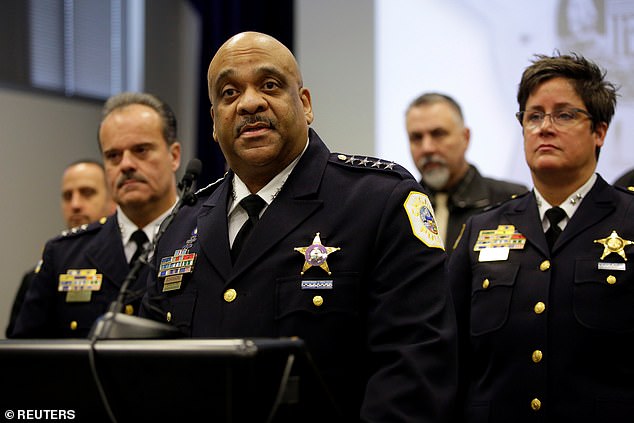 Chicago Police Superintendent Eddie Johnson (above) expressed outrage at Smollett for allegedly lying to investigators. Police were suspicious of his story from the very start

Police responded to Smollett’s Streeterville apartment about 45 minutes after the purported attack.

Though Smollett explained that he had left the rope around his neck to ‘preserve evidence,’ the responding officers were privately baffled that he was still wearing the noose somewhat like a necktie, according to sources briefed on the investigation.

Per Chicago Police Department policy, the officers informed Smollett that their body-worn cameras were active, and he requested that they be shut off – another nagging hint that something was off, sources say.

Cops also found it odd when Smollett led them outside his apartment to show them where the alleged attack took place, and immediately pointed out a security camera that he believed had captured the incident.

Smollett also referred to this security camera during his now infamous interview with ABC’s Robin Roberts.

‘I looked up and I saw there was a camera directly on the light-post that is in the intersection, so I’m like ‘There it is,” Smollett said. ‘And then the detective told me that the camera inside of the casing was facing north. So they didn’t have it, and that was disappointing.’ 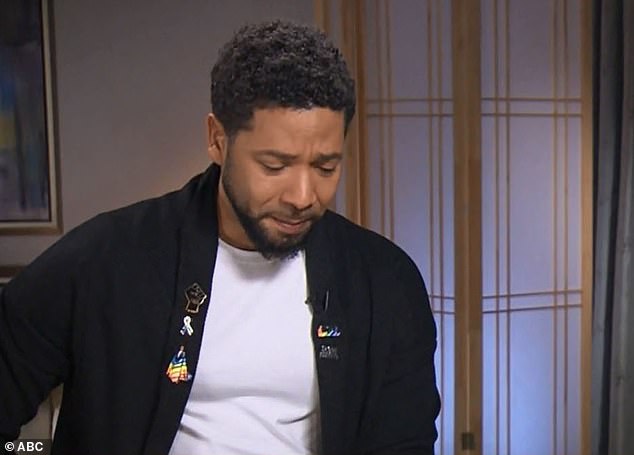 In this interview with ABC News, Smollett described the camera he though had captured the attack. Police say he pointed out the camera to them immediately

Police now say that Smollett had specifically cased that camera with brothers Abimbola ‘Abel’ Osundairo and Olabinjo ‘Ola’ Osundairo, bodybuilders of Nigerian descent whom he is accused of paying to stage the attack.

On January 27, two days before the attack, police say that Smollett picked up the brothers in his car and drove them to the intersection to plan the attack.

‘Smollett directed the brothers’ attention toward a surveillance camera on the corner, which he believed would capture the incident,’ Lanier wrote in the bond proffer.

In his initial report of the attack, Smollett also perplexed investigators by refusing to turn over his cell phone to responding officers, who wanted to verify that he had been on the phone with his manager at the time of the attack.

The records he ultimately handed over were heavily redacted – which sources say allowed cops to zero in their investigation by focusing on the call records that he had deleted, by comparing them with records obtained through subpoena of his phone carrier.

As the investigation progressed, CPD was very careful in its public statements, continuing to describe Smollett as an ‘alleged victim’ up until the point that charges were filed.

Though the camera outside of Smollett’s apartment was pointed a different direction and did not capture the attack, it and other cameras ultimately unraveled the case. 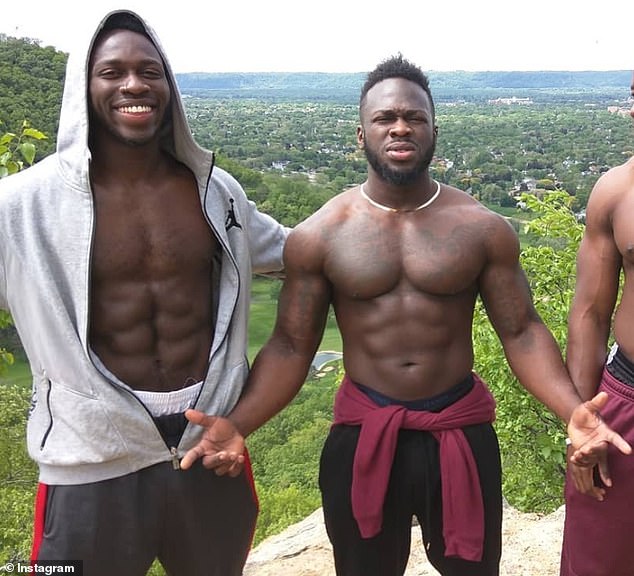 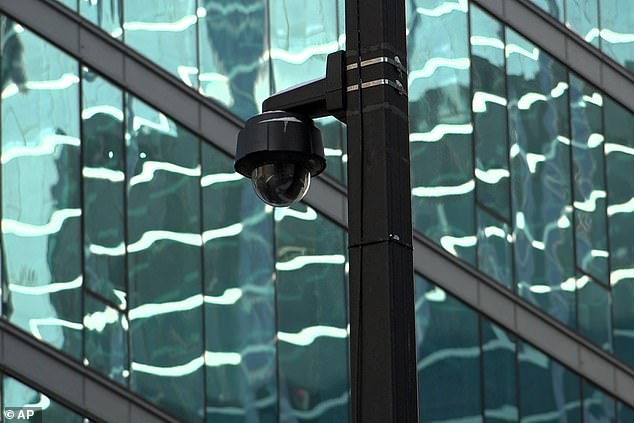 Smollett eagerly pointed out this camera to police as he described the attack, but didn’t realize that it was pointed in the other direction and had not captured the incident

After extensive canvassing, police were able to track the movements of the purported attackers to the point they left and arrived in hired cars, and use taxi and rideshare records to identify them.

The brothers confessed their involvement, and receipts for the purchase of items used in the attack, as well as a personal check Smollett wrote to Abel for $3,500, offered damning evidence that the attack was indeed a hoax.

At a press conference on Thursday, Chicago Police Superintendent Eddie Johnson expressed outrage at Smollett for allegedly lying to investigators.

‘Why would anyone, especially an African-American man, use the symbolism of a noose to make false accusations?’ Johnson said. ‘How can an individual who’s been embraced by the city of Chicago turn around and slap everyone in this city in the face by making these false claims?’

Smollett is charged with disorderly conduct-false report, a Class 4 felony.

He continues to vigorously maintain his innocence. The producers of the television show Empire have said that he will be cut from the final two episodes of the season.