What’s more unusual is that it appears the items—which include blades, axe heads, nails and other iron, lead and copper tools—were repurposed by local Chickasaws Indians after de Soto and his conquistadors fled their attack in 1541.

According to their research published in the journal American Antiquity, that would have been a rare score at a time when European goods were incredibly scarce in North America.

Typically such items that would have been reserved by Europeans for strategic trades with local leaders.

You might find a handful of European goods ‘in connection with a high-status person or some other special context,’ said archaeologist Charles Cobb, the study’s lead author.

‘But this must have been more of an open season—a pulse of goods that became widely available for a short period of time.’

Chickasaw craftspeople turned parts of horseshoes into scrapers, barrel bands into cutting tools, and bits of copper into ‘jingling pendants,’ according to a release from the Florida Museum of Natural History.

Archaeologist Charles Cobb and his colleagues discovered more than 80 metal items left behind by Hernando de Soto when his expedition team fled a bloody massacre by the Chickasaw Indians in 1541. Pictured: Cobb displays an iron celt, or axe head, reshaped from a Spanish design to mimic a traditional stone axe head

If their assessment is correct, the team said, this would be only the second site offering solid archaeological evidence of de Soto’s expedition into the Southeast, which researchers believe he began in Tampa Bay.

The only other evidence, according to the Florida Division of Historical Resources, are fragments from his winter encampment in the Apalachee capital of Anhaica from 1539 to 1540, uncovered in 1987.

An explorer who made forays into Nicaragua and the Yucatan Peninsula, and was involved in conquistador Francisco Pizarros conquest of the Inca in Peru, De Soto is best known for leading the earliest European expeditions into the Southeast.

Initially he was searching for gold, rumored to be plentiful in the region, or alternately a passage to China or the Pacific coast. 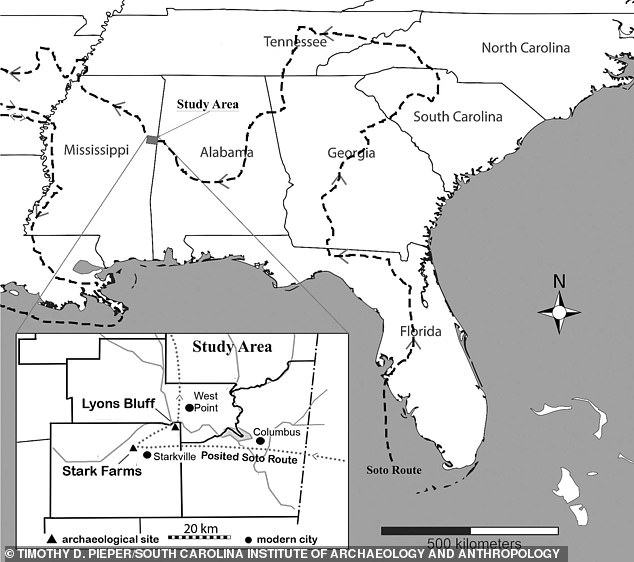 A map of De Sotos’ expedition through the southeast United States. Stark Farms was located near the Mississippi-Alabama border (see inset) After de Soto demanded 200 Chickasaw men as porters, the tribe attacked the conquistadors as they slept. Pictured: The Chickasaw likely sewed rolled pieces of copper to clothing as ‘tinkling ornaments,’ according to archaeologists

Frustrated in his efforts, he settled for obtaining what he could from native tribes.

De Soto first encountered the Chickasaw in 1540 near the Tombigbee River in northeastern Mississippi.

At the time, the tribe numbered less than 5,000 and the 600 heavily armed Spaniards easily dominated them. 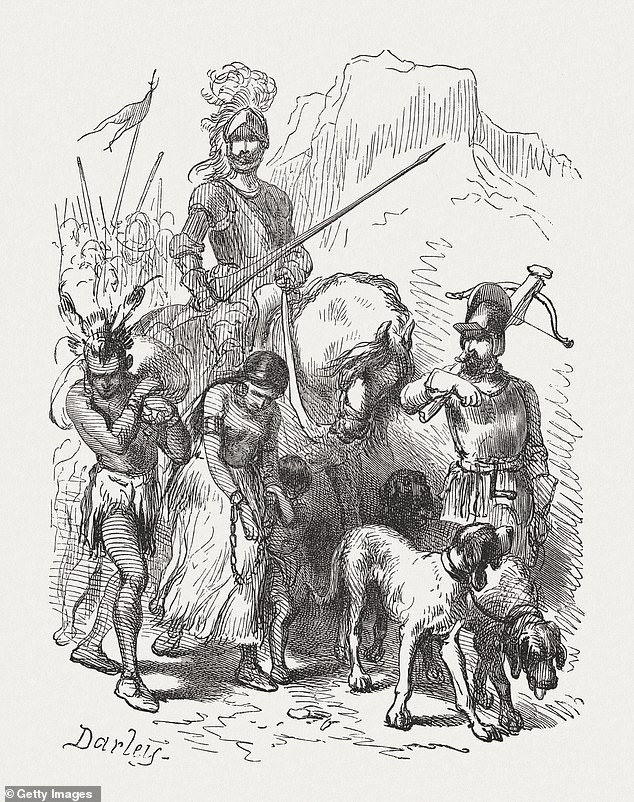 A 19th century wood engraving of conquistator Hernando de Soto in Florida with captured Indians, after a drawing by Felix Darley

It’s not clear if Chickasaw leader Chikasha Minko gave de Soto a modest village to ride out the winter of 1541, or if the conquistadors seized and occupied the wigwams.

As the cold season continued, though, tensions flared—according to Cobb, de Soto killed two Chickasaw men and cut off the hands of another accused of stealing pigs.

In spring 1541, as he prepared to depart with his team, de Soto demanded the Chickasaw provide 200 men to use as servants.

Instead, tribe members set fire to the wigwams under cover of night—burning at least 12 men alive—and then killed two dozen more men. 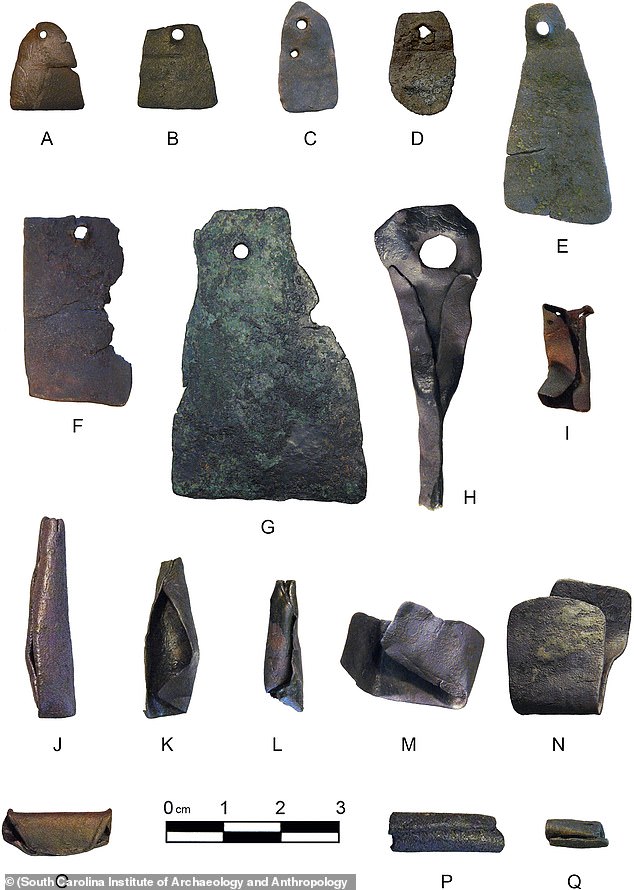 The trove of metal items is one of the few examples of material evidence of de Soto’s forays into the southeastern US. Pictured: A variety of copper items left by de Soto that were punctured and transformed into ornaments According to 19th century historian George Payn Quackenbos, the Chickasaw could have annihilated the Spaniards utterly, but chose to let them flee.

In their haste, they left behind much of their remaining livestock, clothing and goods, which the Chickasaw apparently put to good use.

Metal detectors at Stark Farms, an archaeological site in northeastern Mississippi, uncovered more than 80 items, including a mouth harp and what could be a Spanish bridle bit emblazoned with a golden cross.

Europeans rarely traded or gave military items to Native Americas, so the presence a cannonball at the site adds to the idea the items were spoils left behind when the Spaniards fled the Chickasaw in 1541. 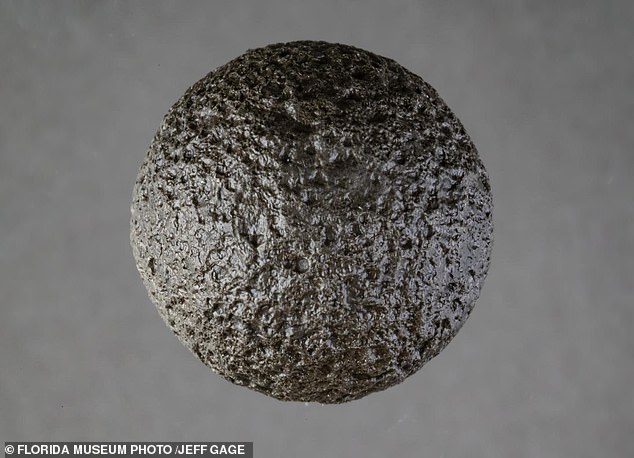 Europeans rarely traded or gifted military items to Native Americas. The presence of objects such as this palm-sized cannonball lead researchers to believe the items were spoils  believe left behind Spaniards fled the Chickasaw in 1541

They also found chain links that had been pulled apart with sharpened edges.

‘The Spanish brought reams of chain with them to shackle Native Americans as captives and porters,’ Cobb said. ‘This is evidence of some of the first examples of European enslavement of people in what is now the U.S.’

Some of the artifacts were still in their original form, but many had clearly been repurposed.

‘This research shows how Chickasaws adapted to invasion by alien intruders and secured their reputation as unconquered and unconquerable,’ Lieb said.

It establishes ‘a baseline event in Chickasaw cultural history—the first encounter with Hernando de Soto and the Spanish invaders.’

Shortly after their brush with the Chickasaw, on May 8, 1541, de Soto’s team became the first Europeans to set eyes on the Mississippi River.

He died on the banks of the river the following year. 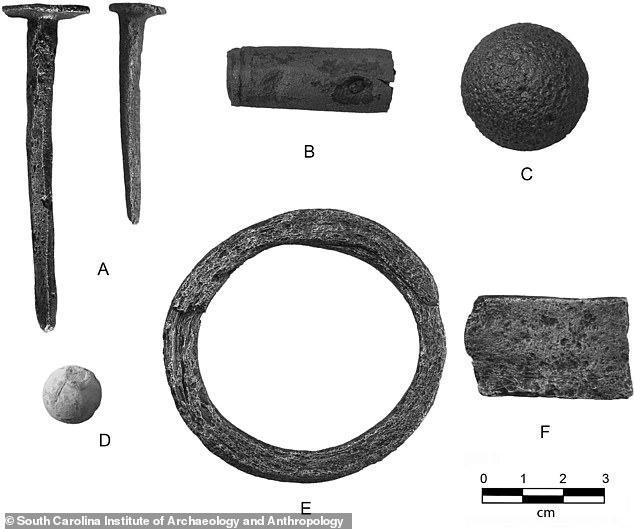 The Chickasaw remained mostly free of Europeans for the next 150 years, Cobb said.

In later centuries, though, they encountered and developed relationships with colonists from France, Spain and England.

The US considered the Chickasaw one of the ‘Five Civilized Tribes’ of the Southeast, though they resisted attempts at taking their land,

Eventually during the era of Indian Removal in the 1830s, the Chickasaw were forced to sell their territory to the US government and move to Oklahoma in the Treaty of Pontotoc Creek.

Today, the Chickasaw Nation counts some 38,000 members, according to Encyclopedia Britannica.

Cobb and his team had been commissioned by the Nation to identify and preserve ancestral sites in their original homeland.

The objects will be repatriated to the Chickasaw Nation in Oklahoma for permanent exhibition.

In 2016, archaeologists announced that wood fragments found decades earlier were the remains of a large wooden cross De Soto erected on an Arkansas hilltop in 1541.

According to the Arkansas Archaeological Survey, researchers from the University of Arkansas were dispatched to the top of a mound in what is now Parkin Archaeological State Park in Cross County to clean up holes left by looters.

While doing so, they found a large wooden post, consistent with what was known about de Soto’s cross, planted in what was then a village inhabited by the Casqui tribe.

A sample of the post was collected and stored in the University’s museum, where it remained largely forgotten until the 1990s.

The large wooden cross was said to have been erected by de Soto on July 4th, 1541, as the Spanish conquistador was fighting his way through the southeastern United States on his 1539-1542 expedition.

In 1992, carbon-14 dating of the wooden post sample revealed it originated between 1515 and 1663, ‘in the right ballpark,’ as the Survey said in a statement.

A 2016 excavation into the post’s roots indicated it was partly burned, and made of bald cypress.

Further down in the ground, shards of Native American pots were discovered.