Sir Graham Brady is bound by party rules to trigger a no confidence vote in the leader if he receives 48 letters, amounting to 15% of the parliamentary party

The head of the Tory party’s 1922 Committee has urged MPs to stop submitting formal demands for a leadership contest – sparking fears he may be perilously close to having to call one.

Sir Graham Brady is bound by party rules to trigger a no-confidence vote in Theresa May’s leadership if he receives 48 letters of dissent, amounting to 15% of the parliamentary party.

The senior Tory was said to be ‘ashen faced’ with the prospect of receiving another letter recently, leading to speculation the total received could already be in the mid-40s.

Sir Graham, who was knighted in the New Year Honours after holding off calls for a leadership election following Mrs May’s calamitous party conference speech, recently told colleagues to ‘be careful’ and consider the consequences before sending one of the letters, according to The Sun.

A growing number of Tory backbenchers have openly voiced their criticism of Mrs May, with one former defence minister branding her ‘dull, dull, dull’.

As the influential head of the 1922 Committee, the group of Tory backbench MPs in Parliament, Sir Graham must tell No10 within 24 hours after the threshold for a no confidence vote has been breached.

His knighthood sparked accusations of cronyism as political rivals accused Mrs May of rewarding the man who holds her future in his hands. After the party conference debacle, Sir Graham urged the PM not to ‘cut and run’ amid growing calls for her head, saying: ‘At the moment we are solidly behind Theresa May.’

He did not comment on The Sun’s report last night, although another source said the vast majority of Tory MPs did not think it was the right time to change leader.

Sir Nicholas Soames, who has represented the Tories in the House of Commons since 1983, used Twitter to direct his ‘dull, dull, dull’ jibe at Mrs May’s government.

Sir Nicholas’s comments came just days after Mr Boles warned the Prime Minister it was ‘time to raise your game’ and claimed her Government ‘constantly disappoints’.

The Grantham and Stamford MP tweeted at the weekend: ‘There is a timidity and lack of ambition about Mrs May’s Government which means it constantly disappoints. Time to raise your game, Prime Minister. #worboys #HousingCrisis #NHSfunding #etcetc’ 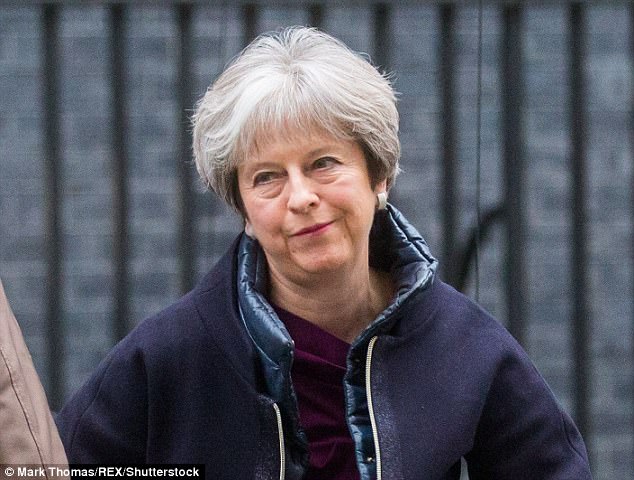 A growing number of Tory backbenchers have openly voiced their criticism of Mrs May, (pic on January 8) with one former defence minister branding her ‘dull, dull, dull’

Asked about the concerns expressed by Mr Boles and Sir Nicholas, Mrs May’s official spokesman said: ‘If you look at action taken by the Government in recent months, you can see it is getting on with the job of building a stronger economy and a fairer society that works for everyone.’

He cited cuts in stamp duty for first-time buyers, the launch of a 25-year environment plan and an industrial strategy, plans for an energy price cap, the recently published race disparity audit and the injection of money into health, social care and schools.

‘Of course, we know there is more to do and the Prime Minister is committed to getting on and delivering.’