Chief medical officer Chris Whitty has returned to work after recovering from coronavirus, it was revealed today.

There had been concerns about the condition of the government’s leading adviser, who started displaying symptoms just after Boris Johnson went into quarantine nearly two weeks ago.

Prof Whitty, 53, has not been seen since, with only a handful of tweets being posted on his official feed.

However, senior government sources confirmed today that the medic is out of isolation and has been working.

‘He is out of isolation. He is fine. He kept doing conference calls,’ a source told MailOnline. 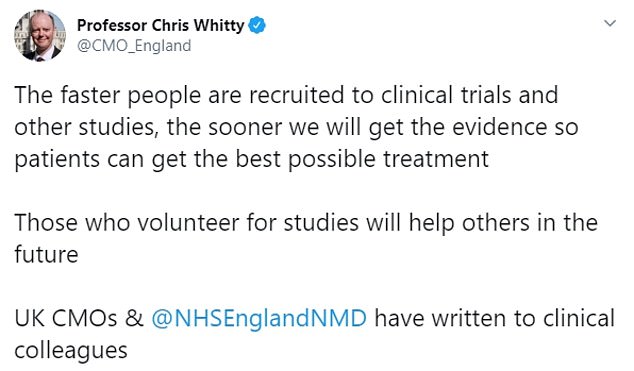 Prof Whitty, 53, has not been seen since starting to display symptoms last week,  with only a handful of tweets being posted on his official feed

The news is a boost to the government as Mr Johnson struggles to overcome the virus, undergoing tests in hospital.

It was Prof Whitty who told the premier to get tested for a cough.

The PM was dramatically admitted to St Thomas’s, near Downing Street, last night after doctors became concerned his symptoms have still not subsided 10 days after his positive test.

Mr Johnson is thought to have been given oxygen treatment, with claims he had ‘risked his health’ by keeping up a frantic workrate. One MP suggested that he was too keen to emulate his hero, Winston Churchill and should rest.

Downing Street has insisted the premier remains in control of the government’s response, despite remaining in hospital with no clear timeframe for being discharged.

However, his effective deputy Dominic Raab chaired the daily coronavirus crisis committee meeting this morning, and the PM will clearly not be playing the same role as usual.

In a Twitter video posted on Friday from quarantine in No11, where he has been in self-isolation, an exhausted-looking Mr Johnson revealed he was still suffering from a high temperature.

Experts say there is a risk of pneumonia when a temperature lasts more than a week. There have been claims Mr Johnson has been coughing heavily during conference calls.

Housing Secretary Robert Jenrick said Mr Johnson had been ‘working incredibly hard’ and said he hoped he would be back in Downing Street soon – but did not rule out him being forced to stay in for longer.

Health minister Nadine Dorries – the first MP to test positive for coronavirus, but now recovered – suggested the PM needs to ‘sleep and recover’.

Foreign Office minister James Duddridge said Mr Johnson must now ‘let others do the heavy lifting’, while Tory West Midlands Mayor Andy Street said the PM might have to recognise he is ‘not indispensable’ while he recovers.

Cabinet minister Michael Gove’s wife Sarah Vine delivered a furious rebuke to those who had been demanding Mr Johnson keep working, saying: ‘I hope you are happy now. He’s in hospital.’ 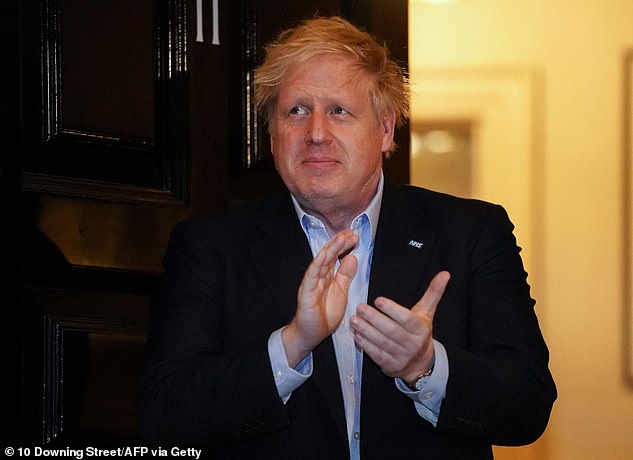