The chief suspect in the disappearance of Madeleine McCann ‘has not provided German police with an alibi’, a German prosecutor has said.

Christian Brueckner, 44, was officially designated as a suspect, or ‘arguido’ by Portuguese authorities on Friday, in connection with the three-year-old British girl’s disappearance on May 3, 2007, at a resort on the Algarve.

Brueckner, who is already behind bars in his native Germany for an array of grisly crimes, reportedly exercised his right to remain silent when formally questioned by German police about the events of that night.

However, Brueckner has allegedly told British investigator Mark Williams-Thomas in a new documentary about Madeleine’s disappearance that he can prove he was elsewhere the night the toddler was kidnapped.

But German prosecutor Hans Christian Wolters told The Sun: ‘We’re not aware of any alibi at all.

‘He has not given any information so far — not even via his defence attorney.’

The Madeleine McCann: Prime Suspect documentary, created by US network AMC Crime, is due to air on Tuesday, May 3 – the fifteenth anniversary of Madeleine’s disappearance.

Christian Brueckner, 44, the chief suspect in the disappearance of Madeleine McCann ‘has not provided German police with an alibi’, a German prosecutor has said 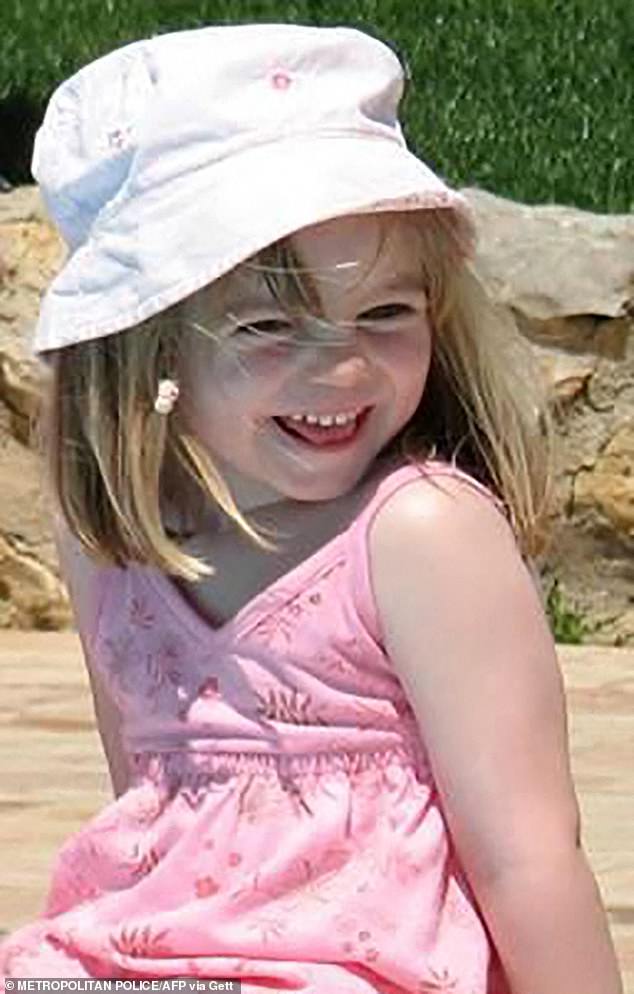 Madeleine vanished from the Portuguese resort of Praia da Luz in May 2007 where she was on holiday with her parents Kate and Gerry and siblings.

Brueckner, who has been linked to four other child murders across Europe since 1996, was sensationally named by German prosecutors as the man ‘responsible’ for Madeleine’s kidnap and murder in June 2020.

On Thursday, the child sex offender was handed a document in prison informing him he was being made an ‘arguido’ by Portuguese prosecutors.

Two days ago, one of Brueckner’s former lovers, 34-year-old Anastasia Meckesy, declared the sex offender had confessed to her in 2013 that he knew what happened to Maddie almost 15 years ago.

‘He said that he ”knows what happened to little Maddie from England”,’ Meckesy told The Sun on Sunday.

She added: ‘Christian is a human pig. That’s how you should see him today. Today I know what he’s accused of.’

Maddie’s parents Gerry and Kate McCann said they welcomed the news that a German man has been declared ‘an arguido in relation to the disappearance of our beloved daughter, Madeleine.

‘This reflects progress in the investigation, being conducted by the Portuguese, German and British authorities. We are kept informed of developments by the Metropolitan Police,’ they added.

‘Even though the possibility may be slim, we have not given up hope that Madeleine is still alive and we will be reunited with her.’

On May 3, 2007, Maddie was staying with her family at the Ocean Club resort in the Portuguese Algarve’s Praia da Luz, a few miles from a ramshackle property the German sex offender was renting at the time.

The three-year-old vanished from her ground-floor bedroom, while her younger twin siblings Sean and Amelie slept close by.

Over the ensuing days and weeks, Portuguese detectives presided over a chaotic investigation marred by a series of blunders that placed them under intense pressure to crack the case.

Madeleine’s doctor parents, Kate and Gerry, were accused of neglect for having left their children unattended, checking on them every 20-30 minutes while they dined in the nearby tapas restaurant.

Brueckner first arrived on the Algarve in 1995, as an 18-year-old backpacker fresh out of prison, and worked in catering jobs in the seaside resorts of Lagos and Praia da Luz.

But he soon became involved in a criminal syndicate that trafficked drugs, and appears to have begun carrying out burglaries and other thefts in the tourist region. 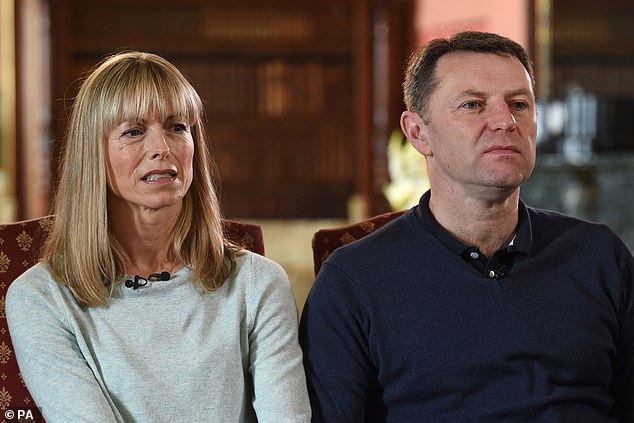 Maddie’s parents Gerry and Kate McCann said they welcomed the news that a German man has been declared ‘an arguido in relation to the disappearance of our beloved daughter, Madeleine

Brueckner spent two months in Evora prison in 1999 for a minor offence, and nine months in 2006 after being caught stealing diesel from lorries on a garage forecourt.

In 2005 he carried out a depraved burglary during which he had bound, gagged, raped and tortured a 72-year-old American tourist in her villa in Praia da Luz.

The victim was ‘grabbed by a very strong and tall man by the neck in the dark’ before being blindfolded and whipped with a metal cane. She said afterwards that he had clearly enjoyed ‘torturing’ her.

That crime went unsolved until 2019, when, following a tip-off from a former friend, Brueckner was arrested, charged and jailed for seven years, a prison term he is currently serving.

Only once Brueckner was charged with that rape did police start investigating his potential links to 18 other burglaries of holiday apartments that had taken place on the Algarve in the early 2000s.

Several of these had involved the sexual assault of women and children, including nine cases of British girls aged six to 12. In most of the attacks, the ‘tall, wiry’ attacker seems to have carried out the sex crimes after stumbling upon his victims when he entered properties in search of valuables.

However, the new documentary is expected to say that despite his horrendous record, Brueckner has several alibis for his whereabouts on the night Maddie was snatched.

Brueckner’s alleged link to the disappearance of Madeleine first became public in June 2020, when German prosecutors announced that they believed him ‘responsible’ for murdering her and said they had ‘concrete evidence’ the British child was dead.

In the aftermath, it emerged that police are investigating potential links to a string of other sex crimes, many involving children. 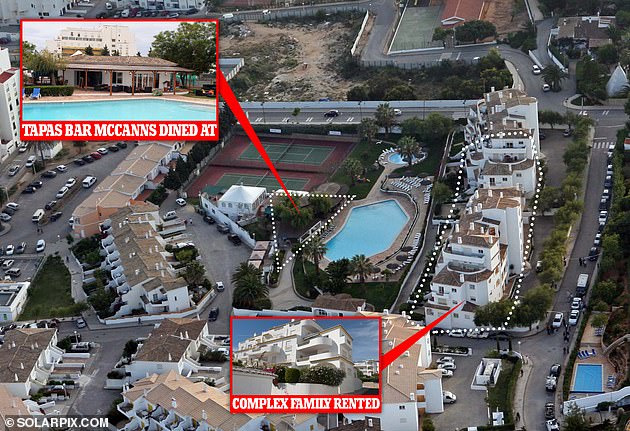 On May 3, 2007 Kate and Gerry McCann went to a small tapas bar metres away from their apartment to dine with friends. But when Kate returned to do a routine check on their children, she found that Madeleine had disappeared

Late last year it was reported that Brueckner would be charged this year with three offences including the rape of an Irish woman in 2004 on the Algarve.

But suspicions that Brueckner was involved in Maddie’s disappearance mounted in 2016, when police were investigating the disappearance of a five-year-old girl — Inga Gehricke, known as the ‘German Maddie’ — who had vanished during a family outing while walking in woods near Braunschweig.

Officers were carrying out a search of land near the scene which had been bought by Brueckner six years earlier.

They found numerous items of children’s clothing, most of them ‘small swimsuits’, in a motorhome parked on the property.

Shortly after Madeleine vanished in 2007, with the case increasingly the subject of frenzied media attention, Brueckner suddenly left Portugal.

Local police failed to lock down the resort of Praia da Luz and set up road blocks, apparently assuming the little girl had merely wandered off, allowed him to leave without anyone noticing.

It was just one of the many blunders made by Portuguese detectives, who took 12 hours to alert Spanish border police about the missing child, and 48 hours to carry out a basic check of other guests staying at the resort.

Four days passed before they even issued a description of Madeleine.

Meanwhile, the McCanns’ apartment was not taped off until 10am the day after her disappearance, by which time dozens of people had traipsed through the crime scene and contaminated potentially vital evidence, with ash from policemen’s cigarettes later found to be one of the contaminants.

How the disappearance of three-year-old Madeleine McCann unfolded

May 3: Gerry and Kate McCann leave their three children, including Maddie, asleep in their hotel apartment in Praia da Luz, Portugal. When they return, they find Maddie missing from her bed

May 4: A friend of the McCanns reports of seeing a man carrying a child away in the night

May 14: Robert Mural, a property developer who lives a few yards from the hotel, is made a suspect by Portuguese police

May 30: The McCanns meet the Pope in Rome in a bid to bring worldwide attention to the search

August 11: Police in Portugal acknowledge for the first time in the investigation that Maddie might be dead

September 7: Spanish police make the McCanns official suspects in the disappearance. Two days later the family flies back to England

July 21: Spanish police remove the McCanns and Mr Mural as official suspects as the case is shelved

May 1: A computer-generated image of what Maddie could look like two years after she disappeared is released by the McCanns

May 12: A review into the disappearance is launched by Scotland Yard, following a plea from then-Home Secretary Theresa May

April 25: After a year of reviewing the case, Scotland Yard announce they belief that Maddie could be alive and call on police in Portugal to reopen the case, but it falls on deaf ears amid ‘a lack of new evidence’

October 24: A review into the investigation is opened by Portuguese police and new lines of inquiry are discovered, forcing them to reopen the case

January 29: British officers arrive in Portugal as a detailed investigation takes place. During the year, several locations are searched, including an area of scrubland near the resort

October 28: British police announce that team investigating Maddie’s disappearance is reduced from 29 officers to just four, as it is also revealed that the investigation has cost £10million

March 11: Cash is once again pumped into keeping the investigation alive, with £85,000 granted to keep it running until September, when it is extended once again until April next year

March 27: The Home Office reveals it has allocated further funds to Operation Grange. The new fund is believed to be as large as £150,000

June 5: The Home Office gives the Metropolitan Police enough funding to investigate for another year

December 7: Paulo Pereira Cristovao, a long-time critic of Maddie’s parents, was convicted of participating in the planning of two violent break-ins at properties in Lisbon and the nearby resort of Cascais. He is jailed for seven and a half years

June 3: Police reveal that a 43-year-old German prisoner has been identified as a suspect in Madeleine’s disappearance.

April 21: Christian Brueckner, now 44, is made an ‘arguido’, a formal suspect, by Portuguese authorities.