As her mother cheered from the sideline of a JV soccer game last fall in Bend, 7-year-old Naomi Vaughan went off to play in the nearby sagebrush surrounding the soccer fields.

Naomi passed the time digging a hole in the dirt. After a while, something shiny caught her eye and she lifted it out of the soil to show her mother.

She called it her ‘Moana rock,’ because it reminded her of the spiral-shaped amulet from the animated Disney movie.

Paleontologists say ammonites are not naturally found in Bend, but are common to the east near Mitchell, more than 80 miles away. How this ammonite (pictured) wound up in Bend is a mystery

Her mother, Melissa Vaughan, examined the relic and knew it wasn’t just some dusty rock. It was pearlescent.

‘I can’t believe you just found that,’ she told her daughter. ‘It could be millions of years old.’

She was right. What Naomi found was an ancient fossil called an ammonite, an extinct marine invertebrate that last existed more than 65 million years ago.

Paleontologists say ammonites are not naturally found in Bend, but are common to the east near Mitchell, more than 80 miles away.

How this ammonite wound up in Bend is a mystery.

Greg Retallack, director of paleontological collections at the University of Oregon Museum of Natural and Cultural History, believes the fossil originated from the Bernard Formation of Bernard Ranch near the abandoned Eastern Oregon town of Suplee — about 112 miles east of Bend.

‘Presumably there was some family connection between the ranches and Bend, or it was part of a school fossil collection,’ Retallack said.

Because paleontologists don’t know exactly where it came from, it is scientifically worthless, Retallack said. He said other well-preserved ammonites, usually found in Canada, can fetch thousands of dollars.

But it’s still an interesting piece with a dark color and level of preservation not often found in Oregon, Retallack said. Its appearance leads him to think it may also be from out of state, which would open up many other possibilities.

‘Nothing like this is known anywhere near Bend,’ Retallack said. 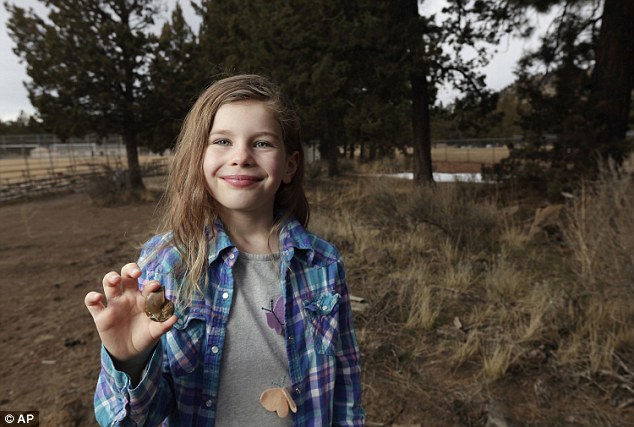 What Naomi found was an ancient fossil called an ammonite, an extinct marine invertebrate that last existed more than 65 million years ago

Nicholas Famoso, chief paleontologist at John Day Fossil Beds National Monument, agrees it is most likely from outside Oregon, compared to the kinds found within the state.

‘Ones here don’t have that same shine,’ said Famoso, who has seen a photo of the ammonite Naomi found.

Someone could have bought it in another state and brought it to Oregon, where it was lost or thrown away, Famoso said.

With no clear answer to where the ammonite came from, Famoso is open to the idea that it has Oregon roots.

‘It is possible it was a fossil from Oregon that got preserved in a particularly nice area that is good for preservation and the fossil ended up getting deposited somewhere,’ Famoso said. 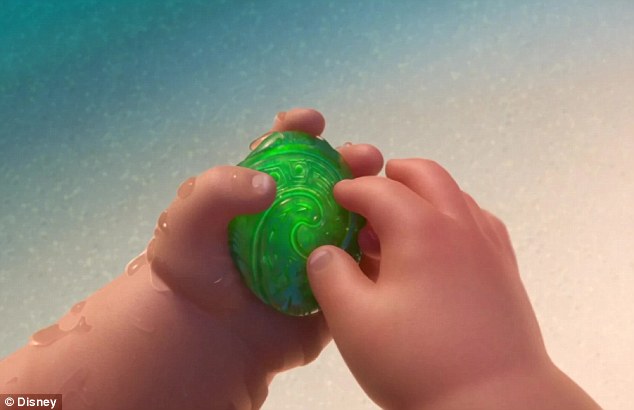 She called it her ‘Moana rock,’ because it reminded her of the spiral-shaped amulet (pictured) from the animated Disney movie

The closest living creature to ammonites is the nautilus, a shelled marine invertebrate.

The nautilus has not populated the earth as extensively as the ammonite, which broke into thousands of species, Famoso said.

Ammonite fossils have been known to humans for centuries, dating back to the Greeks and Romans. The name comes from an old Egyptian god, Ammon, or from the horns of the god, Famoso said.

Ammonites are perhaps the most widely known fossil, particularly in the UK where hundreds are dug up along the Jurassic Coast every year.

The ancient sea creatures sported a ribbed spiral-form shell, and lived between 240-65 million years ago, when they were wiped out along with the dinosaurs.

Ammonites were cephalopods; their nearest living relatives are animals like squid, octopus and cuttlefish.

They ate starfish, small crustaceans such as shrimp and other small marine creatures, using their tentacles to probe the seafloor before snapping up prey.

The creatures moved using jet propulsion via a tube near their mouth that squirted water, much like some species of modern squid.

The ammonite’s shell was divided into chambers and strengthened by walls that stopped it from being crushed by water pressure.

Experts believe they could probably not withstand depths of more than 100 metres.

Naomi’s father, Darin Vaughan, said his daughter plans to keep the ammonite, which has become a cherished possession.

Vaughan, a pediatrician with Mosaic Medical, said he is used to his children collecting rocks and other things they find. He even remembers being drawn to colorful rocks as a child.

But this time it’s much different. His entire family, and the local paleontology community, are impressed with Naomi’s find.

‘She was delighted to find something so beautiful and to discover it’s so old,’ Vaughan said. ‘She is still really excited.’