Child marijuana use has soared 250 percent in just two decades, according to an analysis of poison center data.

While weed is not legal for children, researchers warn the recent wave of legalization among adults has made it increasingly easy for youngsters to access.

They found cases involving marijuana rose the quickest of any substance, replacing alcohol in 2014 and rising fastest between 2017 and 2020 — when weed began to be decriminalized at the federal level.

It comes after a separate study revealed women in states where cannabis is legal are five times more likely to smoke the drug while pregnant, despite the huge risks to babies.

The above graph shows the number of alcohol (orange) and marijuana (green) poisonings reported in the US by year among those aged six to 18 years old. It also includes those from other items such as anti-depressants and opiates. An abuse case is when a patient takes too much with the aim of ‘getting high’, while misuse is when it is taken incorrectly for another reason besides the mental effects

The above shows cannabis use across American states. Twenty-one states and DC have legalized it for recreational use in addition to medicinal use, while nearly all now allow it to be used for medicinal purposes.

Colorado and Washington became the first states to legalize marijuana for recreational use in 2012. Now the drug is allowed to be used recreationally in 21 states and medicinally in 37 states.

For the latest study — published today in Clinical Toxicology — researchers at Oregon Health and Science University looked at data from the National Poison Data System (NPDS).

The reports to poison centers were calls from health professionals, public health agencies or the public.

The calls may have come in because people misused the drug, took it to achieve a high or overdosed. 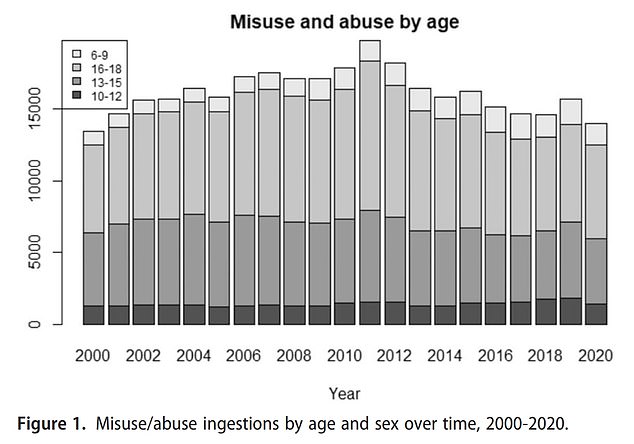 This graphic shows the number of misuse or abuse cases by age group from 2000 to 2020. It reveals more than half are in those over 13 years old

Yearly reports involving weed overtook alcohol in 2014, and became the most common by 2018.

Edible marijuana products accounted for the highest increase in calls to poison centers over the entire study.

Dr Adrienne Hughes, an emergency medicine expert at Oregon Health and Science University who led the study, said: ‘These findings may reflect the impact of rapidly evolving cannabis legalization on this vulnerable population.

‘Along with increasing cannabis legalization, we are also seeing the emergence of alternative modes of consumption, especially non-combustible products such as edibles and vaping devices.

‘These edible products and vaping products are often marketed in ways that are attractive to youth, can be used with more discretion, and are more convenient.

‘A focus group study with teenagers found that edibles were attractive to those concerned about smoking or the smell associated with smoking marijuana.’

The sharpest surge in marijuana use was between 2017 to 2020, rising by about 40 percent in three years.

What are the health risks of marijuana?

About 48million Americans smoke cannabis at least once a year, official estimates suggest.

Marijuana is the third-most commonly used drug in the US behind alcohol and tobacco.

This figure is rising as states continue to legalize the drug.

21 US states have legalized the drug for recreational use for adults.

But evidence is also growing over its health risks, particularly for young adults.

Researchers suggest it has the following negative impacts:

Over the same period, yearly alcohol cases fell by almost a third from 1,318 to 916 reported by the NPDS.

Dextromethorphan, an over-the-counter cough medicine sold under many brand names including Delsym, was the most common cause of poisonings in the study behind 51,667 cases (15 percent of the total).

It was followed by benzodiazepines, prescribed to treat anxiety or insomnia, with 26,037 cases (7.7 percent).

The majority of cases involving alcohol or marijuana were among boys (58 percent).

Eight in ten were also among those aged between 13 to 18 years old, and almost half were among 16 to 18-year-olds.

But there have also been cases among very young children.

Last year a mother in Hawaii was left in shock after her six-year-old daughter accidentally ate a weed gummy that left her suffering seizures.

Of cases recorded, nearly a third had worse than minor clinical outcomes.

Cardiac arrest and seizures were recorded in severe clinical cases, which can both be caused by overdosing on marijuana.

In the study, 66 deaths were recorded due to weed overdoses (0.3 percent of all marijuana cases).

Legalization for recreational use surged in the US over the study period.

By 2014 four states had legalized the drug, rising to 11 five years later. Another four cleared the drug in the last year of the study.

Marijuana is considered particularly dangerous for young, developing brains and may permanently change their structure leading to a loss of IQ.

It has also been linked to increased rates of mental health problems such as anxiety and depression.

Dr Hughes added: ‘Ethanol abuse cases exceeded the number of marijuana cases every year from 2000 until 2013.

‘[But] since 2014, marijuana exposure cases have exceeded ethanol cases every year, and by a greater amount each year than the prior.

‘These edible and vaping products are often marketed in ways that are attractive to young people, and they are considered more discrete and convenient,’ she said.

‘Compared to smoking cannabis, which typically results in an immediate high, intoxication from edible forms of marijuana usually takes several hours, which may lead some individuals to consume greater amounts and experience unexpected and unpredictable highs.’As of 2022, cannabis is legal for adult recreational use in 19 states and for medical use in 36 states.’