Curtis Sell, 53 (in an undated mugshot), was arrested for allegedly breaking into three women’s apartments while naked

A convicted sex offender was arrested after allegedly breaking into three Washington state apartments, while completely nude, so he could try on the homeowners’ lingerie.

Curtis Sell, 53, was arrested on August 22 after an almost three week hunt for the man who authorities deemed the ‘Naked Burglar.’

Sell, a transient, is said to have been naked when he broke into three women’s apartments in Lakewood, Washington, on August 2.

According to charging documents obtained by The News Tribune, Sell allegedly broke into the first woman’s apartment in the morning.

She was sleeping in bed at the time and woke up to find him leaning over her while wearing nothing but a condom and one of her headbands around his waist. The woman reported that he also made a ‘squealing animal’ sounds.

The woman called police after she pushed him out of her home.

Later that morning, in the same building complex, the still naked Sell is said to have woken up a second woman in her apartment when he tried to break into her apartment by removing a window fan.

The second woman reported that Sell was halfway inside her bedroom when she saw him. She yelled at him, which apparently startled him into running away.

The third incident occurred a block away, in the early afternoon, when a third woman told police that she returned to her home and found Sell inside her closet, wearing one of her bras, but otherwise naked. 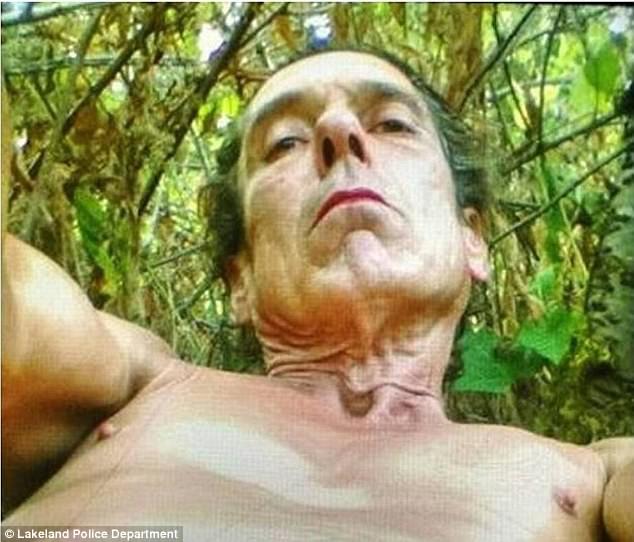 Police in Lakewood, Washington released his selfie from Sell’s cell phone. The phone, found at his ‘camp,’ also had selfies in which he could be seen wearing women’s underwear

Before the woman got home, Sell had apparently availed himself of her apartment by drinking a soda from her fridge, giving himself a haircut and opening a bottle of her nail polish.

Sell eventually left her apartment after she repeatedly told him to get out.

After searching the neighborhood where the break-ins occurred, police found what appeared to be Sell’s ‘camp,’ according to a Lakewood Police press release.

Police believe that Sell was also involved in another break in, but it’s unknown when the incident occurred due to the fact that the woman — who claims that he was naked in her bedroom — was reluctant to discuss it, reports Komo News.

Police were able to track down Sell based on a tip phoned into their Crimestoppers hotline on August 22, they said in a press release.

Sell was found hiding out in the attic of a house at about 1am and was taken into custody and booked, based on an outstanding felony warrant for failing to register as a sex offender.

According to The News Tribune, Sell was convicted of second-degree child rape after having sex with a 13-year-old girl in his trailer in 1997. He was also convicted of failing to register as a sex offender three times.

Sell was charged with three counts of residential burglary for allegedly breaking into the women’s homes on August 2 and is due in court this afternoon.