Childless wives reveal how they’re judged for not having children

A woman has sparked outrage online after asking if people ‘judge married women without kids.’

The anonymous woman, from the UK, took to parenting forum Mumsnet to garner opinions on the subject by asking people what ‘they really think’ and to be ‘honest.’

She was met with a furious backlash as people insisted that they would never say anything to another woman, or even give her child-free status more than a fleeting thought.

However, multiple women challenged this assertion, saying that they are judged and they can sense it, even if the other person doesn’t say anything.

One woman said: ‘Nobody will admit to this on here but clearly people do because childless women like me experience is. I’ve been asked why I don’t have kids SO MANY times. We’re still very child-centric as a society.’

It prompted others to reveal they have been told they ‘are selfish for not having children.’

‘(B) ask them why they don’t have children (feel it’s your place to seek answers); (C) judge them for not having children.

The anonymous woman, from the UK, took to parenting forum to garner opinions on the subject by asking people what ‘they really think’ and to be ‘honest’

One person said: ‘None of the above. I might wonder but the potential pitfalls are far too massive to go blundering in with a question.’

Another agreed saying: ‘I definitely wouldn’t judge. I probably would have a little “I wonder why?” thought to myself but wouldn’t voice it.’

While someone else wrote: ‘If I’m honest, I do wonder “In my head” why they don’t have children and do wonder if it’s infertility or choice, but this is all in my head and would NEVER ask.’

Others admitted they would probably ‘wonder why someone didn’t have children but wouldn’t ask.’

However some women insisted they have experienced judgement from people for not having any kids. 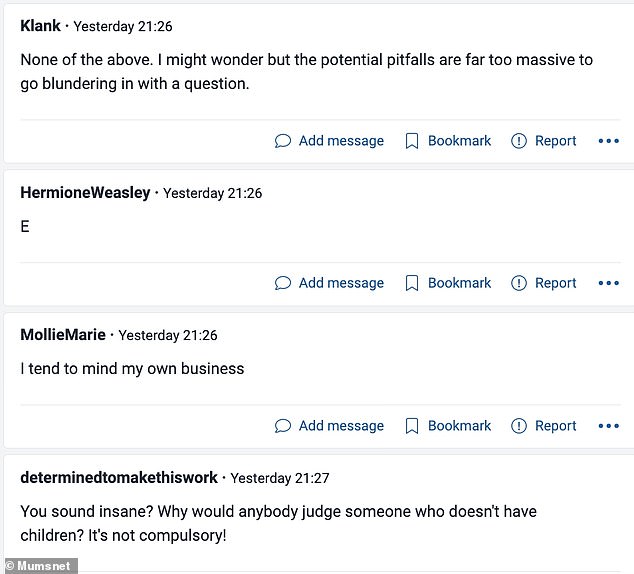 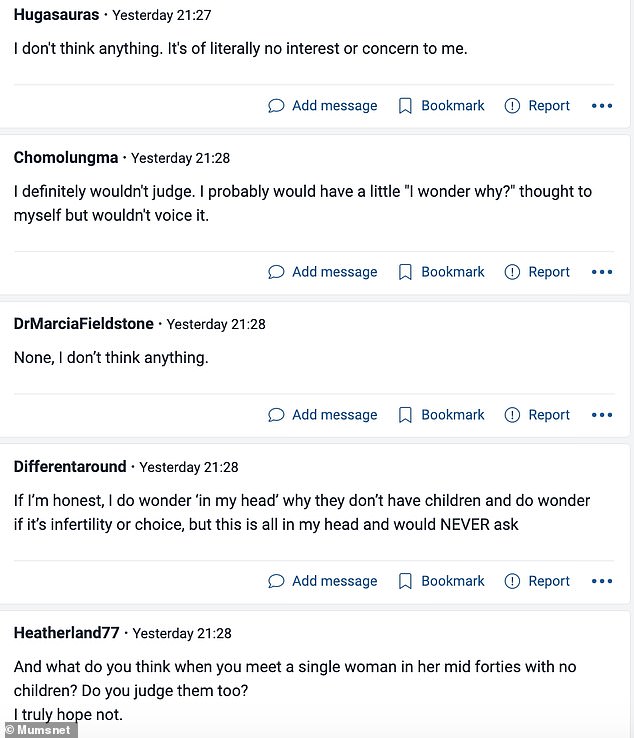 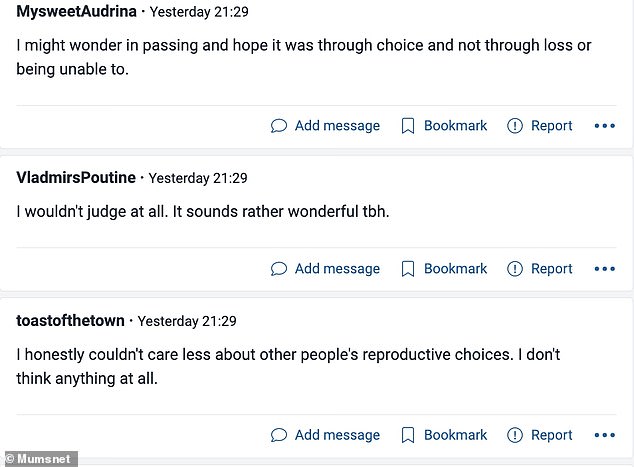 One wrote: ‘We can definitely sense when we’re being judged. It’s a strong vibe.

‘It does say more about the person making the judgement though. I haven’t said a word usually but I know I’ve been put in a mental box by someone.

‘And this is where we fall over our own shoes, judging other people about why they might not have children. If we’re ever going to be inclusive on all levels, we need to halt these legacy assumptions about ovaries and uteruses and whether they’ve been occupied or not. Period! (couldn’t wait to use that!)’

The original poster replied: ‘You make such a great point. We can sense when we are being judged.

‘And sometimes, we might not be being judged, but we can sense when somebody is wondering or making assumptions, and that makes us feel judged. As you said, we should halt these assumptions if we want to be inclusive.’ 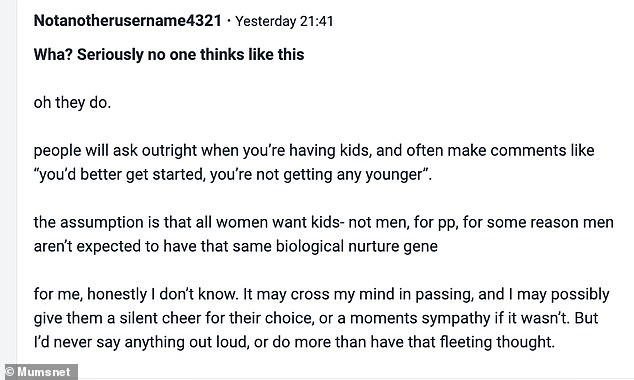 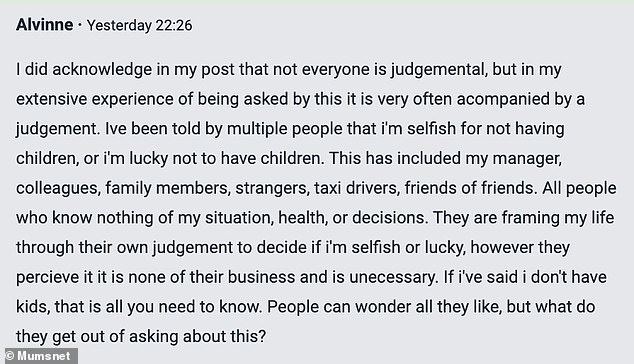 Another woman wrote: ‘As someone who was married and had no children, it was incredibly hurtful and upsetting if anyone asked why. Plus nosey.

‘Not everyone is in a situation to have children, or can have them. I was even asked once if I had a problem with my ovaries!!!!!!’

Another said: ‘People will ask outright when you’re having kids, and often make comments like: “You’d better get started, you’re not getting any younger”.

‘The assumption is that all women want kids – not men. For some reason men aren’t expected to have that same biological nurture gene.

‘For me, honestly I don’t know. It may cross my mind in passing, and I may possibly give them a silent cheer for their choice, or a moment’s sympathy if it wasn’t. But I’d never say anything out loud, or do more than have that fleeting thought.’ 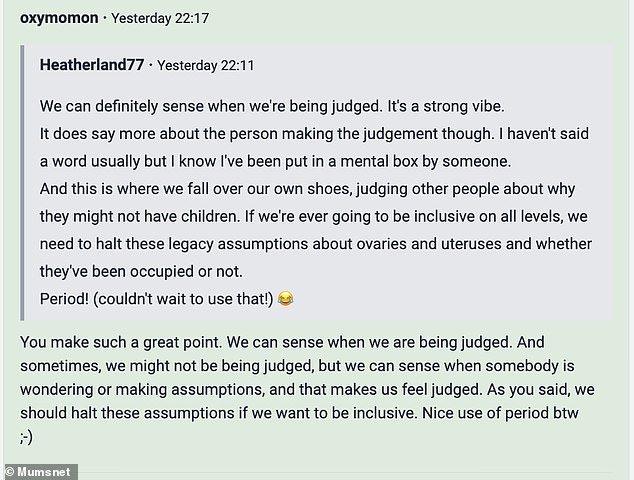 While another said: ‘Ha! Try telling older women to not be nosy.

‘I’m nearly 40 and do not have children and I’ve had numerous women – usually over 60 – ask me why, often with a pitying look/raised eyebrows, and sometimes accusingly!

While many were angered by the question itself saying it is ‘weird’ and some wondered why she didn’t ask about men not having children.

One person said: ‘Why would anybody judge someone who doesn’t have children? It’s not compulsory!’

Another wrote: ‘What a nasty post of course I wouldn’t judge married, childless women. How odd!’

While a third said: ‘What about a married man with no kids? Would you ‘judge’ him or just the women?

‘What an utterly bizarre concept, judge them on what? Their ability or not to reproduce? Their reasons (or not) for that? Your post makes very little sense whatsoever.’

While others said they are actually jealous of child-free couples so they definitely wouldn’t judge. 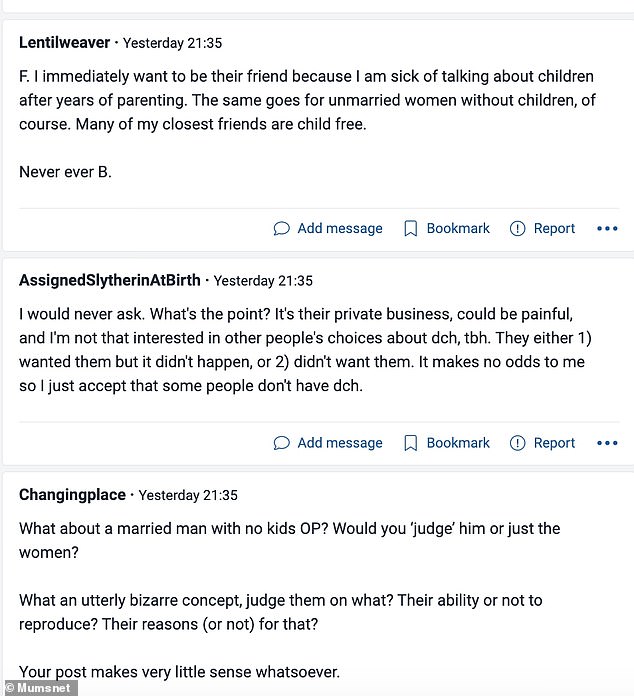 One person said: ‘I would never judge, too busy being jealous of their lifestyle.’

Another wrote: ‘All I feel is jealousy. I’m married (happily) with two young children and I’m exhausted and have done absolutely no self-care for four years.

‘My mate is childless and married and is so beautiful, well rested, exercises a lot, goes on lovely holidays and has so much freedom. Sigh.’

While someone else said: ‘I immediately want to be their friend because I am sick of talking about children after years of parenting.

‘The same goes for unmarried women without children, of course. Many of my closest friends are child free.’ 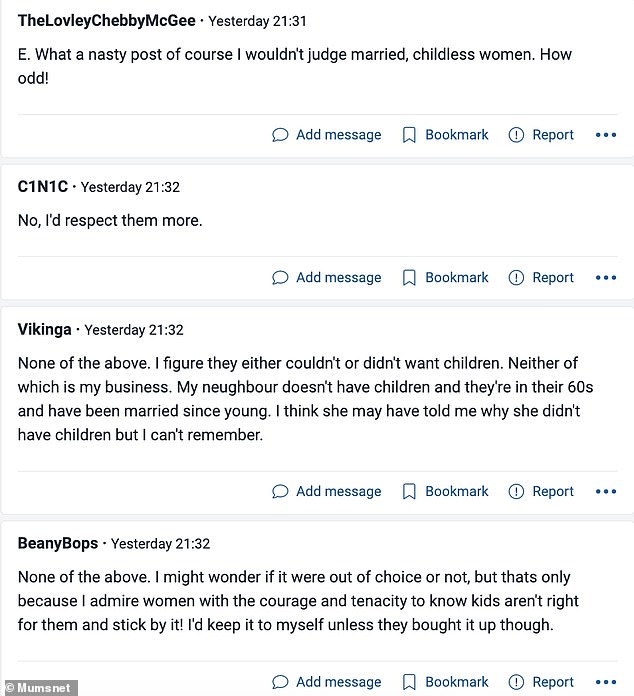 A fourth wrote: ‘Currently with my child wailing in my ear, I’d think “you sensible folk” but I genuinely wouldn’t give it a second thought.

‘But I also don’t judge people who rent instead of buy, or what they do for a living etc.’

The original poster said: ‘I appreciate the honesty in these responses. It’s heartwarming to hear that most don’t feel they judge.

‘But many have admitted they would wonder why, but wouldn’t ask. Do you think that a woman could perhaps be able to sense that another person wonders why?

‘Might that very sense, make a woman “feel” judged. After all, why would you wonder why? As one poster said, would you ever wonder why a married woman DID have children?’