Children are paying the price for this idiocy by a teachers’ union, writes JOANNA WILLIAMS

Children are paying the price for this idiocy by a teachers’ union, writes education expert JOANNA WILLIAMS

By Joanna Williams For The Daily Mail

After weeks of sniping at the Government’s approach to shutting Britain’s schools, one might have expected the National Education Union to offer up a message of support for its plan to reopen them.

Indeed, if it were going to criticise anything, it would be its glacial pace: while some primary school pupils will go back next month, the vast majority of children will not see the inside of a classroom until September.

They will have been out of school for more than five months, leaving a cosmic black hole in their education.

And yet Mary Bousted, the joint general secretary of the NEU, says such a cautious approach is ‘nothing short of reckless’.

How anyone – let alone the head of the union that represents the majority of teachers in the UK – could draw such a conclusion beggars belief.

Mary Bousted pictured at a Teachers Union conference in Liverpool.  Joanna Williams criticises her actions in her Daily Mail column

But as someone who has spent years studying the education system, I wasn’t surprised by Mrs Bousted’s comments. After all, it was her union which set up a petition last month opposing the reopening of schools ‘until it is safe to do so’.

Of course, the safety of Britain’s children, as well as their teachers, must be at the forefront of every decision. But you don’t have to be an education expert to conclude that the NEU has lost all sense of proportion in this pandemic.

How else can we explain Mrs Bousted’s suggestion this week that Britain should copy China’s dystopian approach to containing the virus and spray children at the school gates with disinfectant? Such an approach is suitable for cattle, not children. It’s also scientifically dubious.

Only last weekend, Sir David Spiegelhalter, one of the UK’s top statisticians, said the risk coronavirus posed to the young was ‘staggeringly low’.

Another recent review, based on 78 studies from around the world, claimed there were no known cases of children having passed on coronavirus to adults. And yet for almost two months, Britain’s schoolchildren have been forced to put their education on hold.

I’m certain that many of them will have watched the Prime Minister’s announcement on Sunday and, just like my daughter, were left in total dismay. They are bored, lonely and, along with many hardworking teachers, are itching to get back to school.

For if the past months have taught us anything, it is that remote learning is no substitute for the classroom. 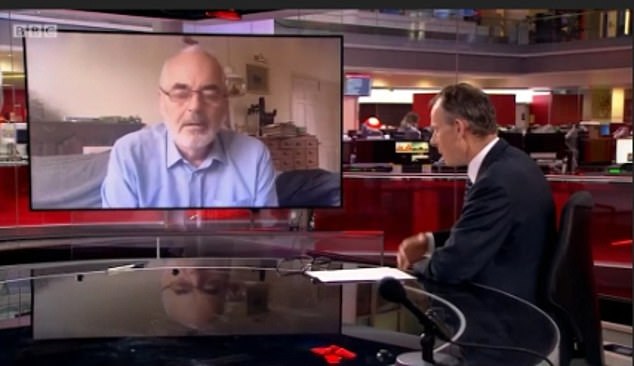 Sir David Spiegelhalter, one of the UK’s top statisticians, said the risk coronavirus posed to young people was ‘staggeringly low’ last week. He is pictured during an interview with the BBC’s Andrew Marr on Sunday

I suspect the NEU knows that failing to open schools could seriously damage our children’s educational, mental and social wellbeing. That’s why, when schools closed in March, it warned: ‘Do not expect teachers to live-stream lessons from their homes… It is not possible to recreate the classroom in this way.’

All of which makes you wonder, if the NEU neither supports remote teaching nor the return to normal education, what does it stand for? School holidays?

One thing we do know is that the reality for thousands of children remains grim. A majority of state school students have not taken part in a single online lesson during lockdown.

A decade has passed since Michael Gove called out ‘the blob’ – the academics, union leaders and bureaucrats who were thwarting his school reforms. But make no mistake, the blob is back. And the damage it is inflicting on our children could be devastating.