British children are suffering from severe head lice infestations because parents refuse to treat them, an expert has claimed.

An increasing number of parents are failing to treat head lice in their children because they fear using chemicals or simply ‘can’t be bothered’.

Parasitologist Ian Burgess, director of the Medical Entomology Centre in Cambridge, warned parents’ relaxed attitudes were contributing to an increase in serious infestations which can cause skin infections and put other children at risk.

He said: ‘People are putting up with them for much longer than they would have done in the past. It could be that they don’t want to use a treatment or they simply can’t be bothered.’

Around one in 10 primary school children in the UK has head lice – tiny insects which live and lay their eggs in hair. Their empty egg cases which stick to hair are known as ‘nits’.

Children who own smartphones or tablets are more likely to have head lice, research revealed in July.

Some 62.5 per cent of youngsters with such devices will experience head lice within a five-year period compared to just 29.5 per cent of children who are less technologically savvy, a study found.

One explanation could be that the pests easily spread when children gather together to look at a screen, according to the researchers from Oxford University.

Yet, taking selfies is not associated with an increased risk of head lice, the research adds.

Matthew Gass, of the British Association of Dermatologists, who was not involved in the study, said: ‘We’re not saying that smartphones are causing children to get head lice, but that there is a link, so if there’s an outbreak at home or at school, consider how electronic devices might cause children to congregate, allowing head lice to spread.’

‘People are not bothering to treat head lice’

Lice quickly multiply and can cause itching and inflammation of the scalp. In severe cases, infections can be caused when children scratch their head with dirty fingernails or if faecal matter from the lice gets into a scratch.

Mr Burgess and his team conducted tests in a primary school in Cambridgeshire before this year’s summer holidays and found around eight per cent of the children had head lice.

They handed parents of all the infested children vouchers worth £10 to collect any treatment of their choice from a pharmacy metres from the school.

Yet only a quarter of the vouchers – for just eight of the children – were cashed in.

Mr Burgess said: ‘An awful lot of people are not bothering to treat [head lice].

‘Treatments cost less than a bottle of cough medicine these days, but even when we were offering treatment for free most parents didn’t take it. That’s a worrying factor.

‘The other 75 per cent of parents presumably decided for themselves there wasn’t anything there, despite the fact that we could not remove all the eggs by combing, or maybe they just looked and thought: “So what?”.

‘One parent told us: “Nobody ever died from head lice so we’re just going to live with them”.

‘There is potential for those children to go on and infest others.’ 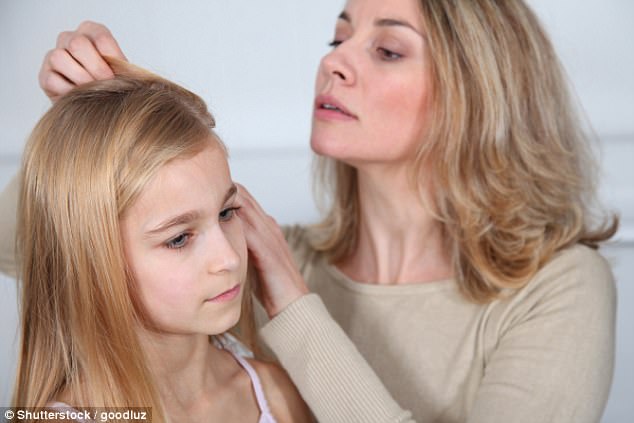 ‘It causes an inflammatory reaction, it triggers an immune response’

Mr Burgess warned that leaving lice untreated could affect a child’s wellbeing, adding: ‘It causes an inflammatory reaction, it triggers an immune response which makes you feel unwell.

‘It causes disturbed sleep and a loss of condition, the hair gets lank and you feel less inclined to groom. As well as the irritant effect it has there’s a higher risk of infection.’

He said parents should make sure they check and treat children for lice before they go back to school as they are most likely to catch them while playing with other children during the holidays.

Caroline Wheeler, of the UK’s leading head lice treatment brand Hedrin, said some parents tended to blame others instead of taking responsibility for their own children.

She said: ‘Parents’ relationship with lice is interesting as there is often a focus on who is to blame. You rarely hear parents blaming another parent or the school if their child gets chicken pox or a cold, however when a parent discovers lice a fixation can sometimes occur with a particular parent who they believe is not treating their child for lice.

‘Weekly checking is crucial as not everyone itches so children can have an infestation for months before it is picked up if they are not scratching their head. Regular checking will ensure lice are picked up early and parents can then treat accordingly.’

Recent figures suggest nearly half of British school children have had head lice at least once in the last five years.