Children born with ‘blue-baby syndrome’ given gift of life

The parents of these three children have never met but they all share one memory: the moment joy turned to anguish as their fragile newborns turned blue and gasped for breath.

As babies, Jack Read, now seven, Cordelia Griffin, 11, and Rocco were all diagnosed with a congenital heart condition where the major arteries leaving their hearts are the wrong way round.

Called transposition of the great arteries (TGA), it is also known as ‘blue-baby syndrome’ and is the second most common congenital heart defect.

As the delicate lives of these youngsters hung in the balance, doctors got to work to carry out complex open heart surgery, when each of them were just days old.

These parents are reminded of their eternal gratitude – because without this treatment their children would not have been here to celebrate milestones or events such as Christmas.

They have come together to back the British Heart Foundation’s appeal to raise over half a million pounds this festive period, to help fund pioneering research and treatments and keep more little hearts beating.

The children’s parents have shared their touching stories with MailOnline.

Rocco Parsley, 3, had ‘blue-baby syndrome’ and was given a new chance of life thanks to open heart surgery 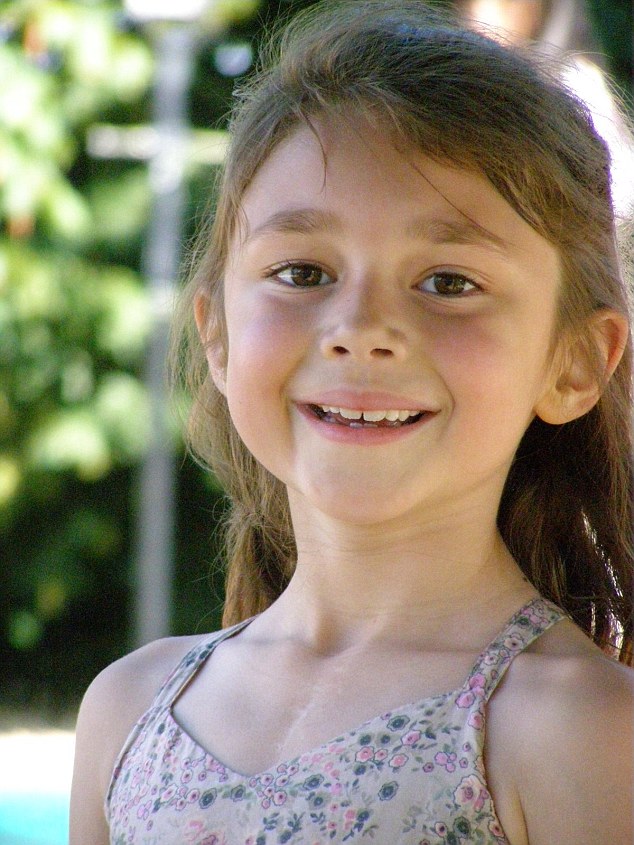 Cordelia Griffin, 11, now has a good prognosis thanks to the ‘arterial switch’ procedure when she was days old 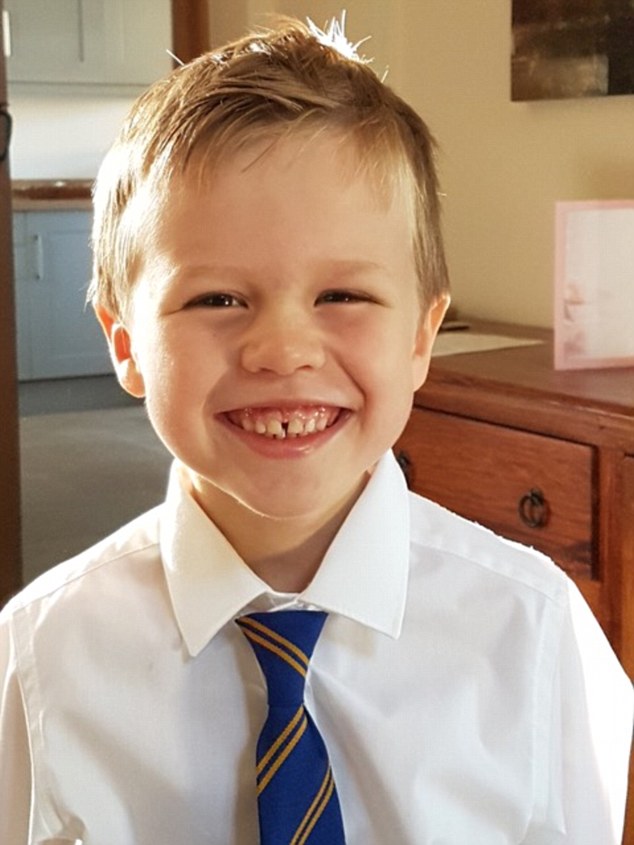 The parents of Jack Read, 7, say you”d never known he was born with a congenital heart condition as ‘he’s always running around like a whirlwind’

Nick and Samantha Read’s ordeal began when Jack was born just four weeks before Christmas in 2010.

Midwives were prepared to send him home but his mother asked to check her baby over as she felt his colour looked ‘a bit off’.

It was then that they discovered that Jack’s oxygen levels weren’t normal and he was rushed to the special care unit.

The couple, from Brigstock, Northamptonshire, who also have another son Ollie, 13, and daughter Jessica, 10, were told their one-day old baby had transposition of the great arteries (TGA).

Mr Read, 47, said: ‘Our beautiful son was the perfect early Christmas present, but sadly, our joy was short lived. 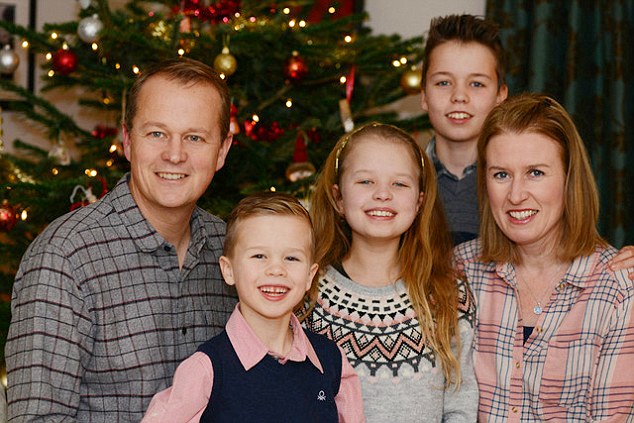 Nick and Samantha Read pictured enjoying the festive period with their children (from left to right) Jack, 7, Jessica, 10, and Ollie, 13 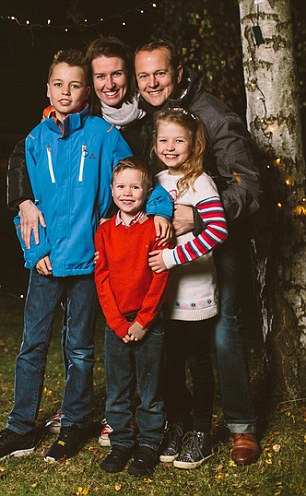 The family are grateful for the British Heart Foundation’s work

‘I was numb with fear as Jack looked so vulnerable. I remember thinking how could such a big operation on such a tiny baby be successful?’

At just six-days-old, Jack underwent an ‘arterial switch’ procedure, which swapped the major arteries back to their normal position.

Commercial director Mr Read explained: ‘The day of his surgery was the longest day of our lives. We’d been told he would be out of surgery after eight hours, and believe me, when you have been told that, you are counting down the minutes and seconds.

‘Seeing your baby in the intensive care unit is horrible – doctors couldn’t close his chest so we could see his heart and lungs pumping away.’

WHAT IS TRANSPOSITION OF THE GREAT ARTERIES?

This means that blood flows to the lungs and picks up oxygen but is then pumped back to the lungs instead of travelling around the body.

Blood flowing round the body is unable to reach the lungs to pick up oxygen and continues circulating.

It is relatively common, according to NHS Choices, accounting for around 5% of cases of congenital heart disease. It affects approx 20 to 30 per 100,000 live births.

The world’s smallest infant to survive the procedure was Jerrick De Leon, born 13 weeks premature in 2005 who weighed just over 1.5 pounds (700 grams).

There is also the risk of more minor complications after surgery, such as a lung infection, or fluid collecting around the heart or lungs.

However, six weeks later, he stopped breathing while B&B owner Samantha, 47, had taken the children out on a trip.

‘Jack suffered a cardiac arrest and was only kept alive thanks to Sam taking fast action to give him CPR.

‘But we have an eternal gratitude to a dog walker who helped save his life by calling for an ambulance. In a state of panic, Sam had dropped and lost her house keys and couldn’t get to a phone.’

After a stay in hospital, Jack was then fitted with a device to record his heartbeat and raise the alarm if his heart starts to malfunction.

Now seven years on, Jack is a happy and lively little boy, but he may need further treatment in the future.

Mr Read said: ‘You wouldn’t know there had been anything wrong with him. He does everything any other child does, plays football, athletics and goes skiing.

‘Jack is often called the smiling tornado, as he’s always running around like a whirlwind.

‘It’s hard not to worry about it happening again, but he is being monitored closely.’

‘Our whole world fell apart’: Maddie’s parents feared the worst but say thanks to the operation she now leads a completely normal life

Teaching assistant Maddie Griffin, 48, and her husband Luke, 48, from Slough, were devastated when they were told their only child Cordelia had heart problems.

She appeared a healthy and happy 7Ib 1oz baby but took a turn for the worse within hours of being born.

Mrs Griffin said: ‘We’d been so happy to fall pregnant. Every visit to the midwife was exciting as I listened intently to the thump, thump, thump of the little heartbeat in my tummy. 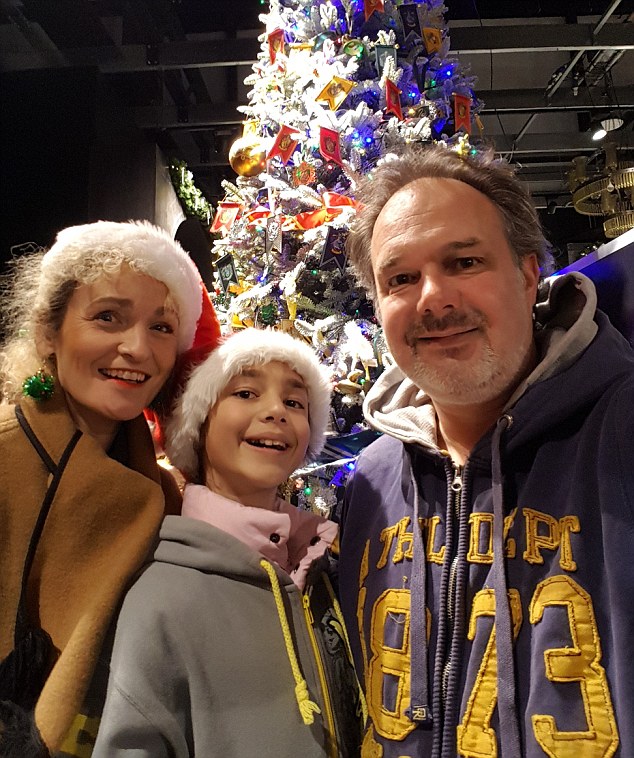 Maddie Griffin and her husband Luke with Cordelia, now 11, who had open heart surgery at only 10 days old 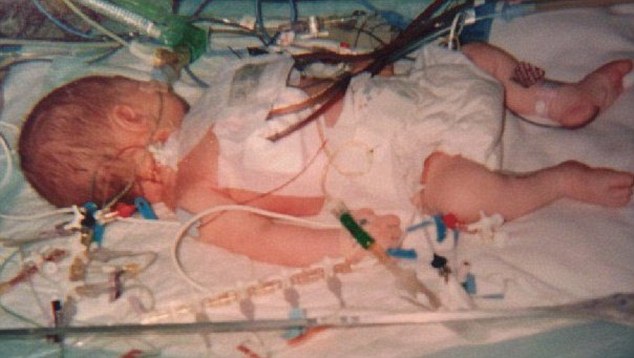 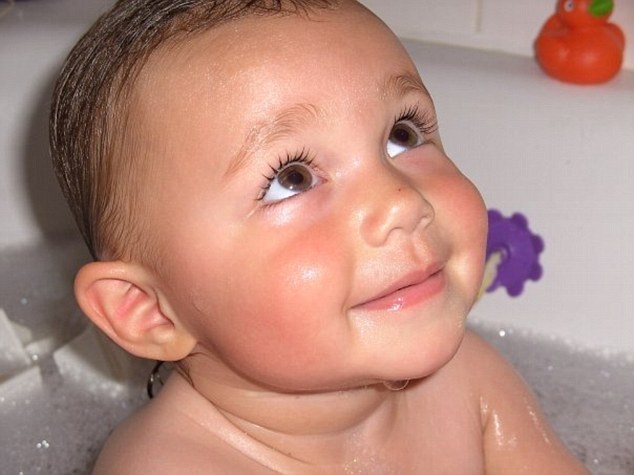 ‘Then straight after she was born, Cordelia was taken to the special care baby unit because she was looking a little blue.

‘The nurses assured me it was nothing to worry about and she’d be back within hours.

‘But despite having lots of oxygen, her levels were still falling. In the early hours of the morning, doctors dropped the bombshell that they needed to take her to a specialist hospital miles away from Margate where she was born to London.

‘The nightmare only got worse as I was told I would be unable to go with her, as I was not fit enough to travel with her after having a Caesarean. Our whole world just fell apart.’

Less than 24 hours after Cordelia was born, her parents were told she had TGA. Three days later, they were reunited as a family and Mrs Griffin could hold her daughter at last.

‘It was a shock, I’d never heard of TGA and we had never felt so helpless,’ she said. 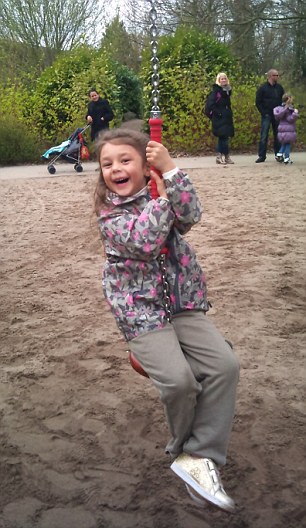 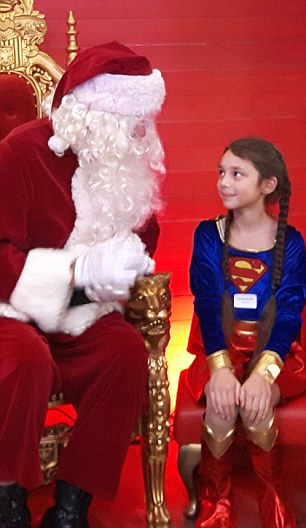 ‘The surgeon was blunt – she needed open heart surgery, there were risks, but without it should would die.’

And so at only 10 days old, Cordelia underwent the arterial switch procedure. Thankfully, she recovered very well, with the exception of suffering a partially paralysed vocal chord.

‘Her heart was only the size of a walnut and the operation is so delicate, it’s easy for the surgeons to press on nerves and cause some damage,’ said Mrs Griffin.

‘Luckily she can talk she just gets a little horse if she’s using her voice too much.’

Cordelia, now 11, is monitored every 18 months, but doctors say her prognosis is very good.

‘She is full of energy,’ said Mrs Griffin. ‘We have never stopped her from doing anything; she has led a completely normal life jam packed with after school clubs and activities such as dance and drama lessons and Girl Guides.

‘I still don’t know how I got through the bad dream of knowing your child’s life is in the hands of other people. But I am so grateful to them for saving my daughter. It puts everything else into perspective.’

‘We named him Rocco because he was our little fighter’

Lisa Parsley, 36, and her husband Jon, from Esher in Surrey, were unable to hold Rocco for the first week of his life as he was rushed into intensive care straight after being born.

Unlike the Reads and the Griffins, Mrs Parsley was told about her baby’s heart defect while she was pregnant.

‘As the sonographer took my hand at my 20-week scan, I knew by the look on her face something was terribly wrong,’ she said. ‘I remember my hands shaking uncontrollably and the room beginning to spin.

‘I convinced myself that if there’s a problem with his heart there was no hope as it’s the heart that keeps our bodies alive. 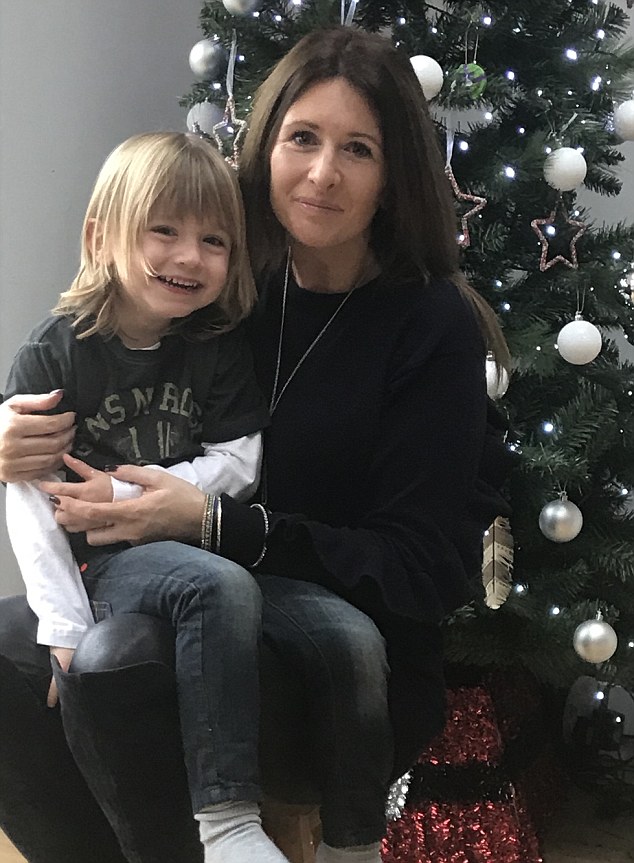 Lisa Parsley is thankful for the pioneering research that goes on to fund life-saving treatments for children affected by heart defects like her son Rocco, now 3

‘This very grand and scientific sounding name, TGA, threw me into a panic stricken place and my perfect little world came crashing down.’

Then when he was born, like most babies with TGA, he appeared blue and struggling.

The mother-of-three said she was anxious about her baby’s health, that her and her husband hadn’t even chose a name for him – until they new he would recover.

‘I was reassured that there was an operation available to fix Rocco’s heart, but as it came closer to my induction date, I began to feel anxious about what lay ahead for us as a family,’ she said.

‘I felt every bit of control over my life being ripped away from me and there was nothing neither Jon or I could do except trust the amazing doctors.

‘We didn’t want to name our baby until after he recovered, as up until that point, we hadn’t even seen his eye colour and all his features because of all the tubes and wires.’

The boy had the operation at only six days old and his parents were relieved and overjoyed it was all over.

Each year, around 4,000 babies like Jack, Cordelia and Rocco are diagnosed with a congenital heart defect in the UK – that’s 12 babies every day.

Visit here to make a one-off donation to the BHF this Christmas.

‘I was determined to give him a slightly different name, considering all he had been through in his first few days of life,’ said Mrs Parsley.

‘We decided on Rocco after the Patron Saint of health and because he was our little fighter.’

Mrs Parsley said she is grateful every single day for the funding put into heart defects.

‘You never know, it could happen to your family,’ she said. ‘I’m just so grateful that people are here to do research and put money behind congenital heart defects.’