PICTURED: Schoolkids celebrate the open-air in historic photography series started in the 1930s and recreated through the decades in Missouri

A historic photography series from Missouri showcases the fun children had in open-air spaces before the days of video games, smart phones and computers.

A safe distance away from cars and other traffic, the kids relished their summer activities from baseball and volleyball to nearly 30 kids of all ages lining-up to pose on a slide.

There were 63 of the open-air spaces when the photo-series began where events, sports and activities were put on for the children.

It quickly became a hit with the children, who relished spending time in the outdoors.

The snapshots started in the 1930s and were regularly recreated throughout the decades to celebrate the tradition and festivity.

Ranging from black and white to sepia and color photos, the historic images remain a time-capsule of the joy and happiness of those years.

June 1934: Children playing at Oak Hill school, on Morganford Road, packed the slide to pose for this photograph. They are part of a photo series now unveiled to showcase the 63 open-air spaces in scattered through the city where youngsters can play, safe from automobiles and street cars 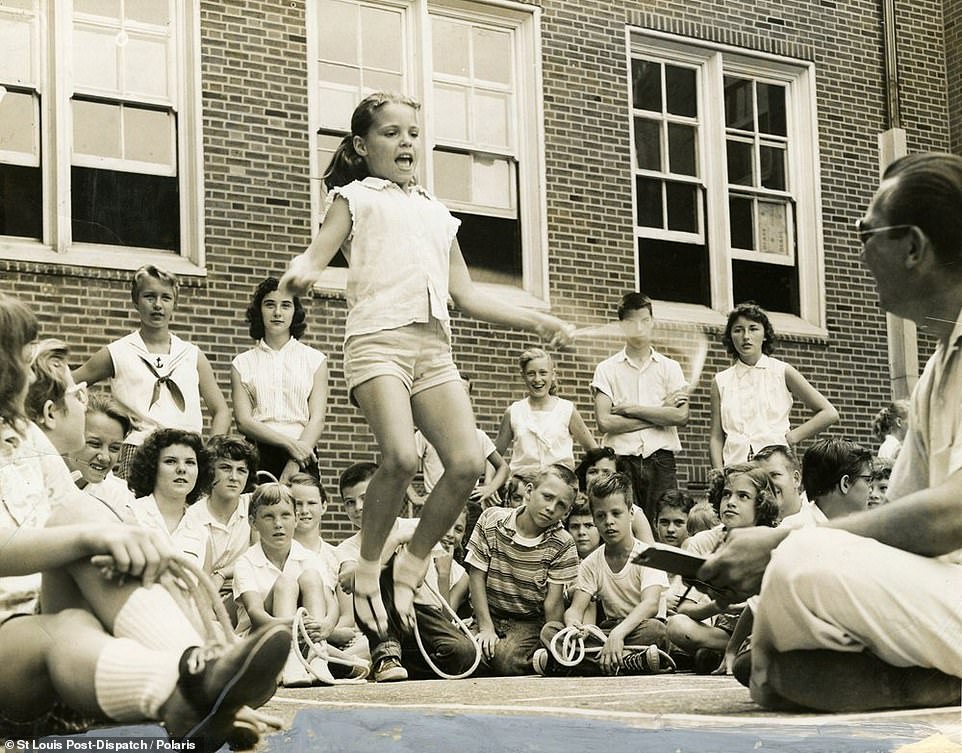 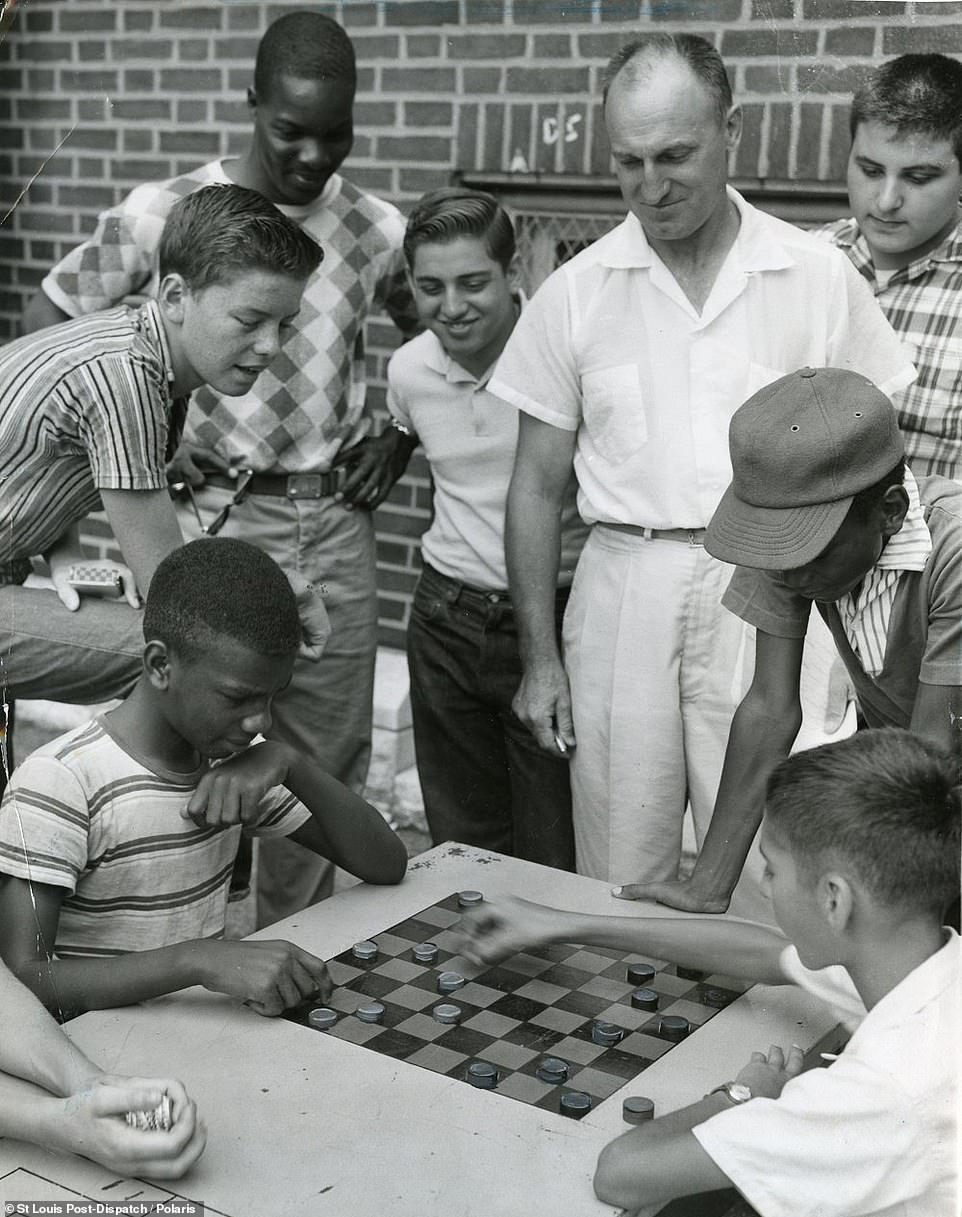 1958: Victor Bennett (left), of Lincoln playground, plays checkers against John Makuh (right) of Kennard playground. Victor went on to win the 1958 public school playgrounds checker tournament, the seventh consecutive year he won the boys’ junior class competition. The man in the white shirt watching is Walter Ehbert, the general superintendent of playgrounds for the school district 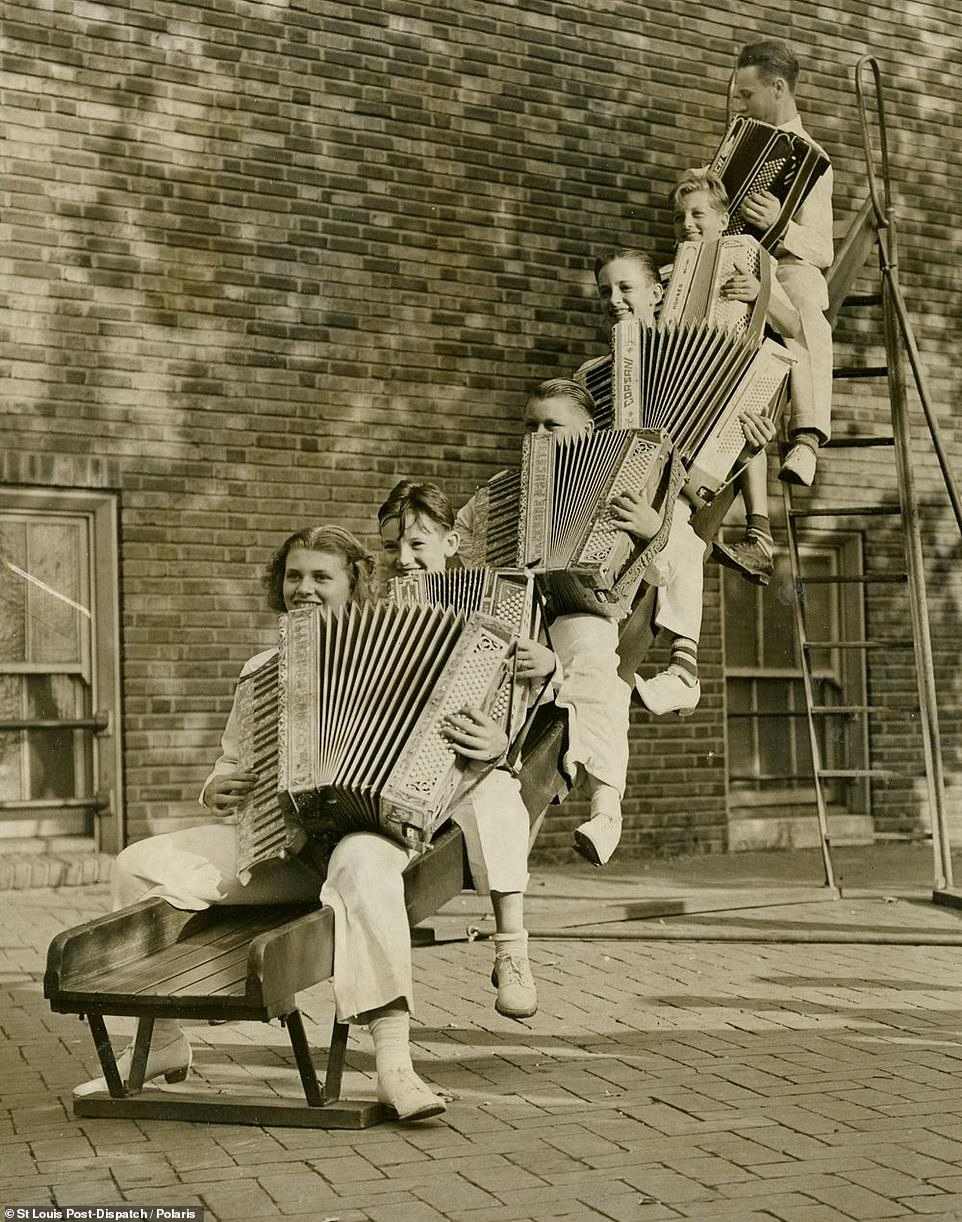 September 1937: Gardenville school was featured for having the only playground accordion band in the city. From left are: Audrey Ross, Elmer Saake, H. Hoellenhoff, Marvin Miller, Joseph Maletich and Elroh Hahn 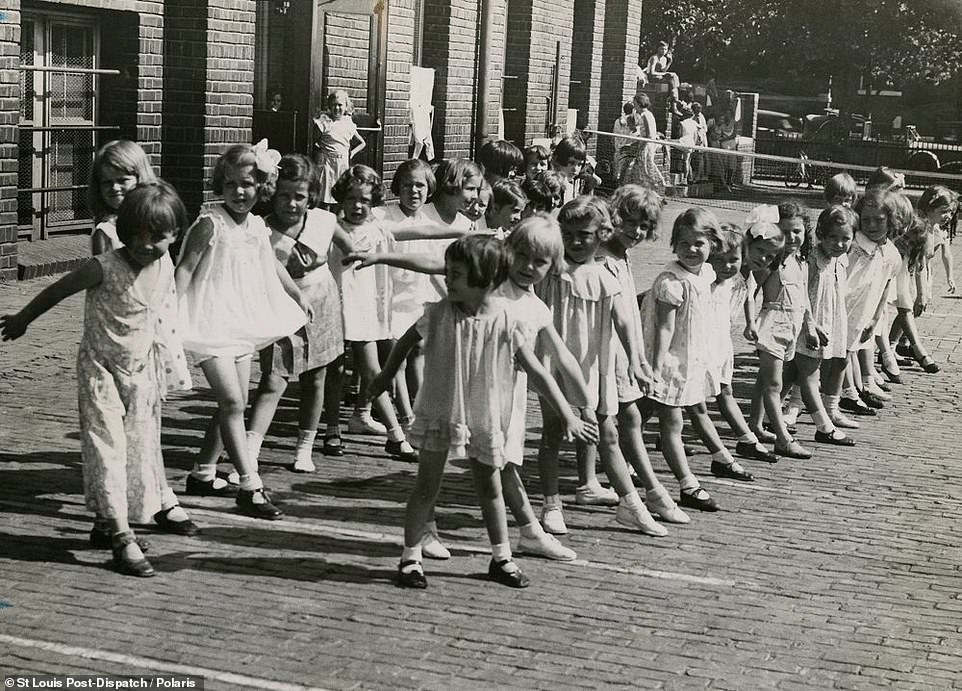 June 1933: Children at Fanning School playground learn dance steps. This was one of many outdoor activities that got children in Missouri excited for summer 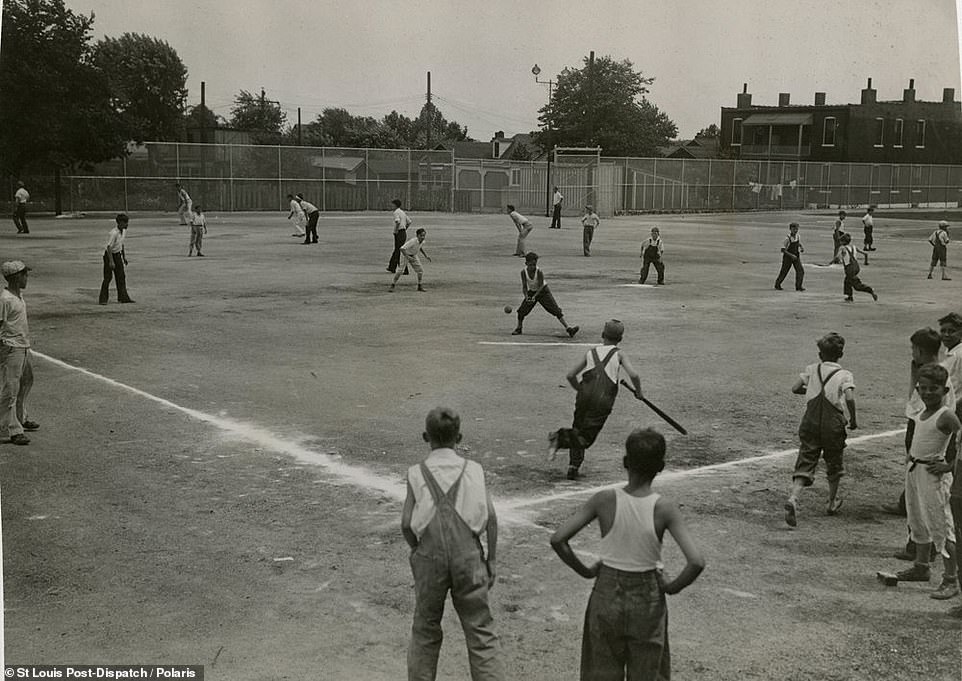 July 1932: Boys at Oak Hill School in St. Louis played baseball. These summer outdoor activities were a great hit with the children who enjoyed a good time in the outdoors, and got healthy physical exercise. The tradition carried on through the years 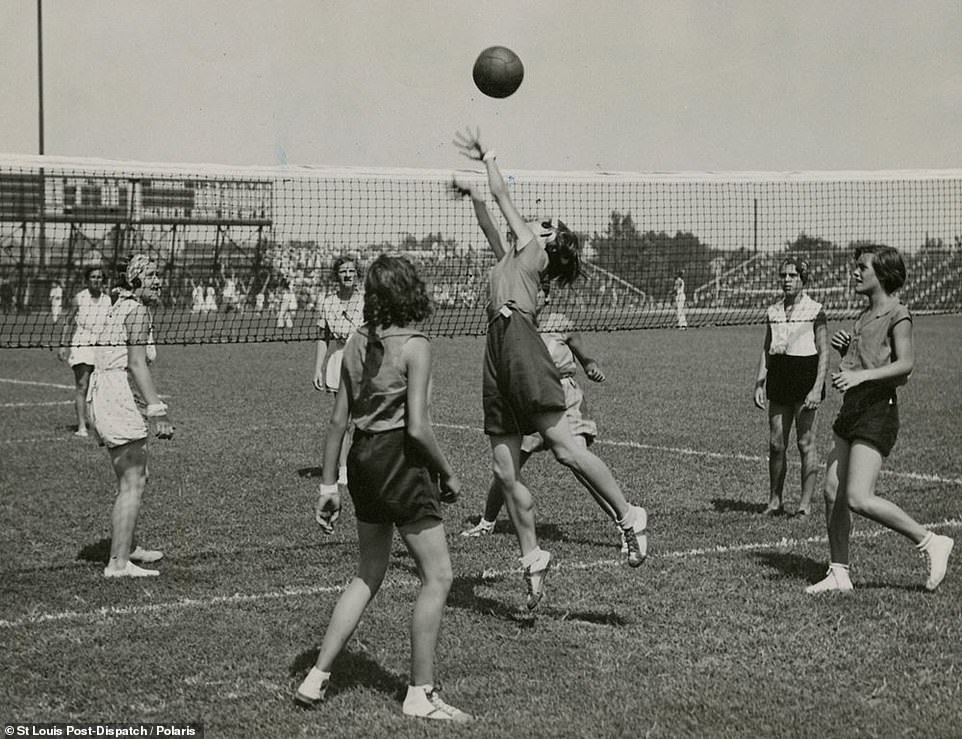 August 1932: Girls play volleyball in one of 63 open-air spaces scattered through the city where youngsters could play, safe from automobiles and street cars 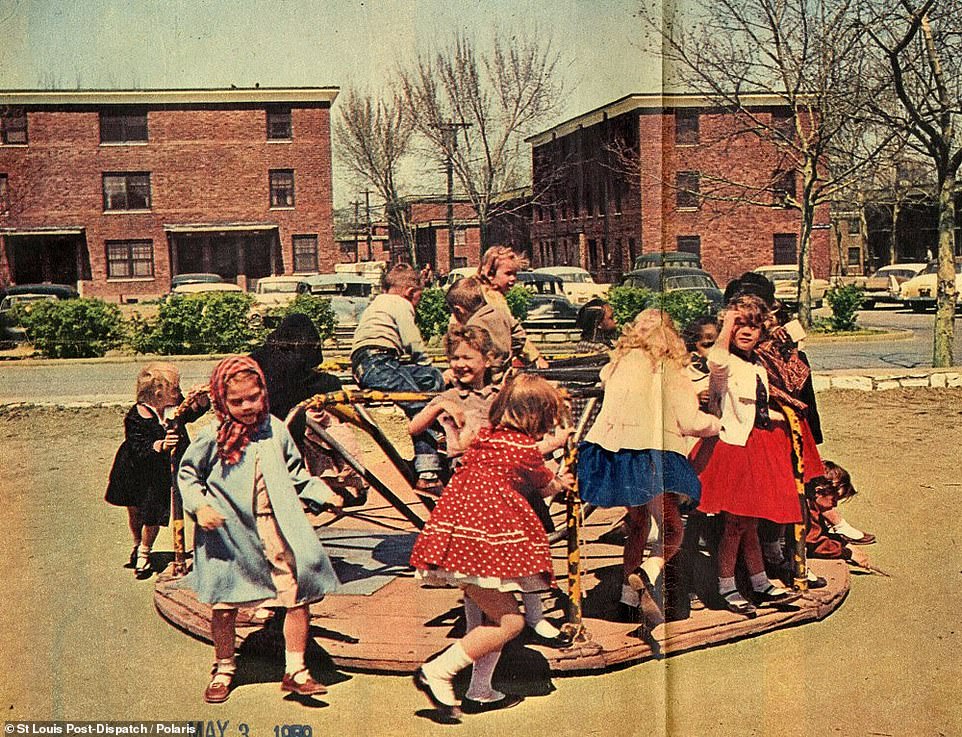 May 1959: Children play on a merry-go-round during ‘one of its less crowded runs during lunch hour’ at the Clinton School on Grattan Street 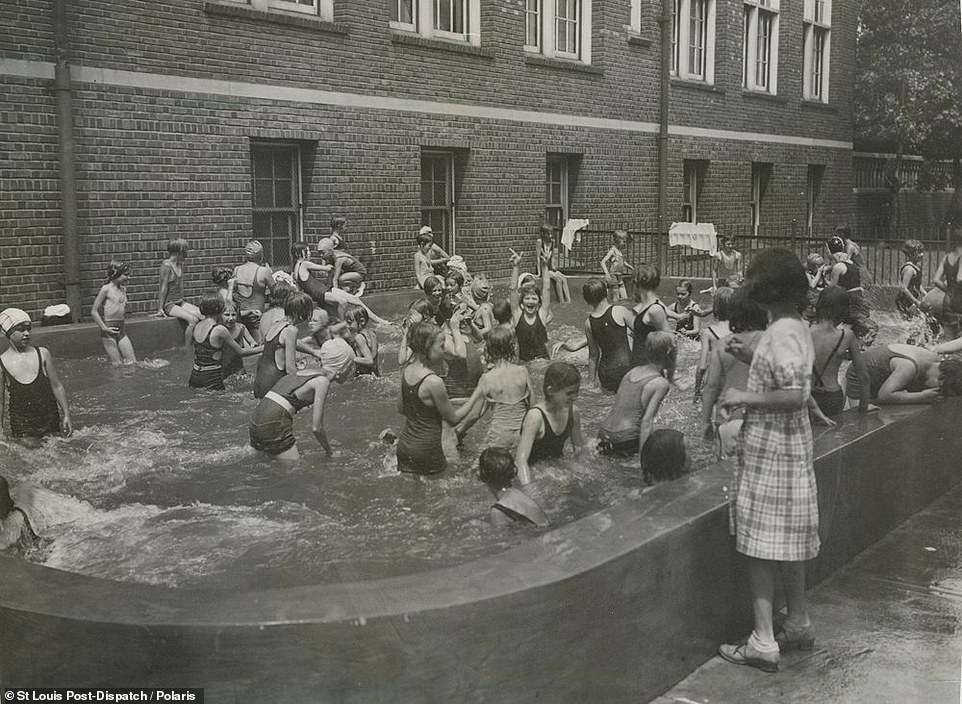 June 1932: Children play in the wading pool at Rose Fanning School. Recreation centers at 50 schools provided ‘a great variety of amusements as well as instruction’ during the summer which the kids could participate in. Over the years, the traditions continued 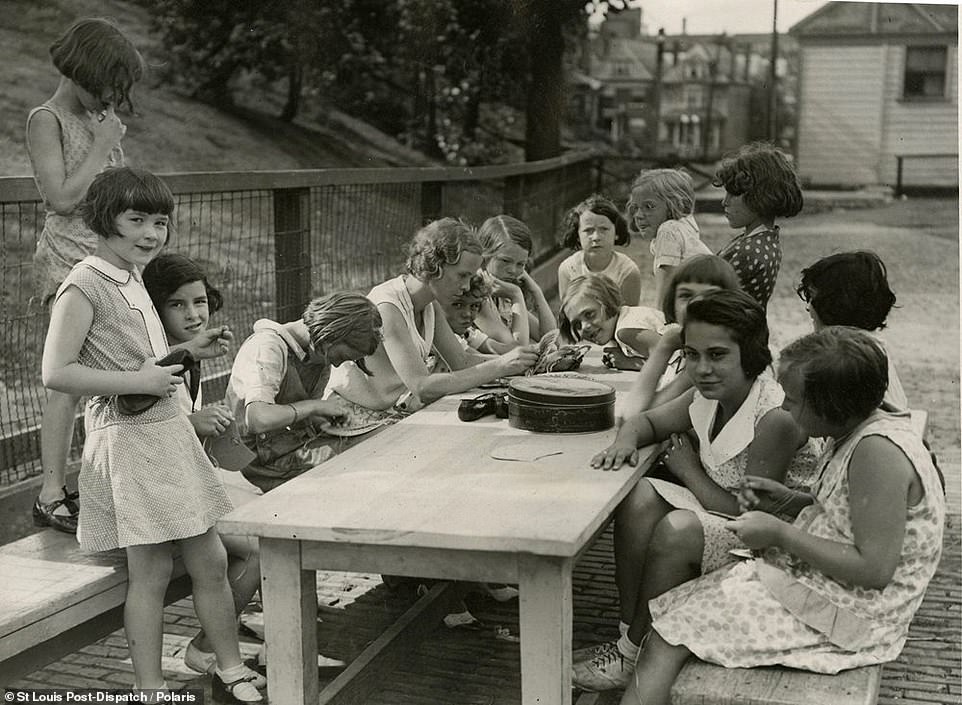 June 1932: Girls at Wyman school make pocketbooks during sewing class. These summer outdoor activities were a great hit with the children who enjoyed a good time in the outdoors, and got healthy physical exercise. The tradition carried on through the years