Children have over 1,000 pictures of them posted online before they turn 13

Before a child becomes a teenager there are 1,300 pictures of them online and they post up to 70,000 times before they turn 18, claims a new report.

Anne Longfield, Children’s Commissioner for England, said that a child’s digital footprint now starts before they are born when parents post scans on social media.

Ms Longfield also called on internet firms and toy companies to be more transparent on data collection from children via interactive toys, smart speakers and some apps.

Anne Longfield, Children’s Commissioner for England, said that a child’s digital footprint now starts when they are still in the womb when doting parents post scans on social media (stock)

Internet-connected toys and online services aimed at younger users should clearly state on packaging or elsewhere if their products captured information about users, Ms Longfield claims.

The report, entitled ‘Who Knows What About Me’, calls for schools to begin teaching children about using social media and how their data is collected.

Children’s Commissioner Anne Longfield said: ‘Children are often shocked to learn just how information and data is collected about them as they grow up, from the information stored by new gadgets like Alexa to data held by their schools.

‘We need to make sure that they can make informed choices about the data they are giving away and that their parents know who knows what about their kids.

‘The Government must urgently refine data protection legislation if GDPR does not prove up to the job.’

The report suggests many parents and children are not fully aware of how much information is being shared across online services and devices.

Social media profile’s of well-meaning parents and internet-connected toys are also contributing to a vast dossier of virtual data on children.

The report claimed that this digital footprint could impact how universities and banks judge people in the future.

Concerns have been raised over the security of some toys that are connected to the internet.

Last year it was discovered that voice recordings from one line of toys were being stored online unprotected.

‘I also want to see all manufacturers and the big internet companies be transparent about how their devices are capturing information about children, toy manufacturers clearly labelling their packaging if they are capturing children’s audio or video and a statutory duty of care between the social media giants and their younger users,’ Ms Longfield said.

‘This is an issue that will only grow as technology continues to advance and it is vital that protections are put in place by the Government so that any data collected about children is done transparently and is used only for positive reasons.’

WHAT DO WE KNOW ABOUT CHILDREN’S MEDIA HABITS?

Childwise is an independent market research agency specialising in children and young people.

The Norwich based organisation has a programme of published independent research and also conducts research for government agencies, charities, broadcasters, publishers and brands.

Around 2,000 children aged five to 16 in schools across the UK took part in the survey, answering questions on topics as varied as their favourite apps, what they spend money on, sports they play, and their worries and concerns.

It found that they spend 2.6 hours a day watching programmes, video and short clips, compared to 2.5 hours last year.

Most children now use devices other than a traditional television set to watch video content.

Children age nine to 16 spend an average of 2.7 hours online a day.

This has dropped over the last three years and is down from 2.9 hours last year.

However, this fall could be a consequence of children being less able to determine which of their routine activities are carried out online or offline.

Children are also taking to virtual reality with 25 per cent having mobile VR equipment at home. 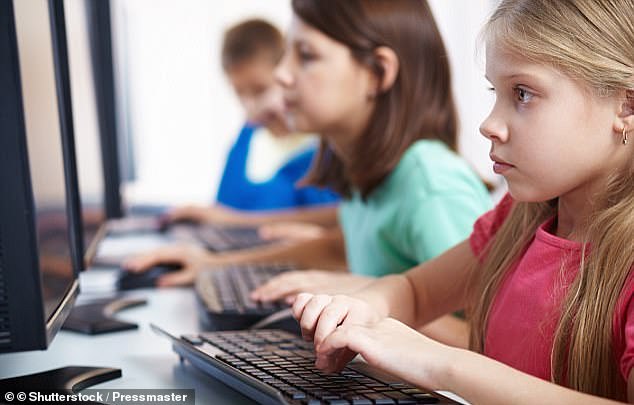 The report also revealed that this digital footprint could impact how universities and banks view and judge people in the future. It also says the digital footprints of children are getting bigger as technology becomes an increasing part of daily life (stock)

The report says the digital footprints of children are getting bigger as technology becomes an increasing part of daily life.

It suggests that children aged 11 to 16 post to social media on average 26 times a day – meaning as many as 70,000 posts about themselves online by the time they turn 18.

It also argues that even children too young to be online are being exposed to data collection by connected toys that capture audio or video.

In response to the report, the British Toy and Hobby Association (BTHA) said its members were committed to data protection.

‘The British Toy and Hobby Association (BTHA) and its members consider the safety and protection of children of paramount importance when designing and manufacturing toys,’ it said.

‘Whilst it is estimated that only 1-2 per cent of the UK toy industry consists of connected toys, the BTHA’s members limit the amount of personal data collected, using closed loop systems where possible.

‘When data is collected, this is done to enhance the play experience, for example remembering the level of the game the child has reached and is collected lawfully and safely.

‘The BTHA is a key supporter of Media Smart, which is a media literacy programme for 7-16-year olds and provides free educational materials for schools and youth organisations, parents and guardians.

‘With the backing of the BTHA, Media Smart are currently producing a free educational resource around data protection and privacy targeted at 9 to 11-year-olds in primary schools, which will launch next Easter.

‘Furthermore, the BTHA released a connected toy guide to all its members in 2017 on best practices and engages with the ICO and the Government’s cybersecurity team on data and security measures.’

HOW CAN PARENTS PROTECT THEIR CHILDREN ONLINE?

These common topics of conversation often reveal key information about a child, including: name, age/date of birth, school name and even their appearance.

Whilst it may be very difficult to protect the privacy of children in the digital age, there are some things that can be done to shelter children from online dangers.

It is amazing how many parents leave on their Instagram location settings. Set your location settings to off if you do not want people to be able to figure out where you and your children live.

Ask yourself if all the people you’re sharing your photos with really want to see them and will they protect them in a way you would.

Private social networks offer a secure way to share the pictures of your children with your family and friends.

Ultimately the only way to be 100 per cent sure that you don’t have a digital footprint is not to have any digital photos taken but this isn’t a road the vast majority of people want to go down.