Doctors are failing to spot the signs of painful urinary tract infections in children, putting them at risk of kidney and bladder damage, experts warn.

The uncomfortable condition, often described as a UTI, affects around one in ten girls before the age of 16, as well as one in 30 boys and if spotted early, can be treated effectively using antibiotics.

However, studies show that as many as half of children who visit their family doctor with the problem are not promptly diagnosed.

Doctors are failing to spot the signs of painful urinary tract infections in children, putting them at risk of kidney and bladder damage, experts warn

Doctors say this is because the tests used by GPs to spot the condition miss more than two-thirds of infections. A more accurate test exists but is used less, possibly because GPs are discouraged by local spending chiefs as it is more expensive and time-consuming.

The more common test is equally inaccurate for adults, but campaigners say the issue is causing greater problems in children, who are harder to diagnose based on symptoms alone. And they are also more likely to suffer severe, life-changing illness as a result of untreated UTIs.

‘It is really difficult to diagnose a younger child with a urinary tract infection, because they are often unable to find the words to explain their symptoms,’ says Dr Cat Anderson, a GP and specialist in microbial infections.

‘While an adult might say her bladder hurts or it stings while peeing, a child might just say they have a tummy ache. You need to test to spot the condition but the test most commonly used often doesn’t work, so many girls and boys are going undiagnosed with painful infections every year.’ 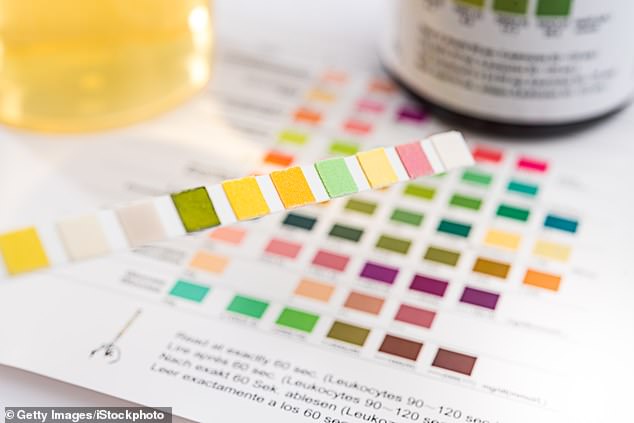 UTIs occur when bacteria gets into the urinary tract – a catch-all term for the bladder, kidneys and tubes connected to them. Sufferers typically experience a burning sensation when urinating, as well as difficulty passing water and a high temperature

UTIs occur when bacteria gets into the urinary tract – a catch-all term for the bladder, kidneys and tubes connected to them. Sufferers typically experience a burning sensation when urinating, as well as difficulty passing water and a high temperature.

NHS GPs are told to look out for a fever, vomiting and loss of appetite in young children. But these symptoms are also commonly seen in other childhood illnesses – such as a stomach bug. It is crucial that GPs spot UTIs in children because, left untreated, the infection can cause severe damage.

Studies show that children are more likely than adults to experience kidney scarring after a UTI – a condition which often leads to kidney failure later in life. Research also shows that children under three are at risk of developing sepsis – a potentially fatal immune system reaction to an infection.

For this reason, in May NHS guidance was published that urged family doctors to rely on testing – as opposed to looking for common symptoms – when diagnosing UTIs in children. But experts say this guidance is flawed because it suggests using the inaccurate dipstick test. This involves dipping a test-strip into a sample or urine. The strip has squares on it that change colour in the presence of certain substances – including sugar and white blood cells – that indicate infections or other problems.

But University College London UTI expert Professor Jennifer Rohn says: ‘The dipstick test is abysmal. It picks up an infection around 50 per cent of the time. You might as well flip a coin to decide.’

Doctors say it is even harder to get an accurate result with young children, with accuracy as low as 30 per cent.

The gold-standard test is a urine culture, where the sample is sent to a laboratory and examined under a microscope. Studies show this technique spots around 95 per cent of UTI-causing bacteria. But experts say that, too often, cultures are not carried out because of time and money factors.

‘The number of parents who contact us and say their child keeps failing urine tests despite having all the obvious symptoms of a UTI is unprecedented,’ says Alison Pearce, a director of CUTIC, a dedicated UTI charity. ‘The NHS urgently needs to reassess how it diagnoses this condition.’

One child left with an undiagnosed UTI was Lea Mackintosh from London, who began experiencing debilitating symptoms at the age of 11. Lea, now 19 and a student, suffered from bladder pain, stinging during peeing and had a constant need to use the toilet. But her mother Beth, 58, says that, at the time, she was unable to describe her symptoms. ‘She wasn’t old enough to put the pain into words, she just said her tummy hurt and something didn’t feel right.’

Beth, a charity worker, took Lea to the GP, who carried out a dipstick test, which came back negative. When Beth pushed for Lea to see a hospital consultant, she was told her daughter was most likely suffering from stress. ‘The consultant refused to do more tests and said it must be stress from her SATs exams. But the only thing stressing her was the pain.’

Lea continued to suffer recurrent bouts of pain over the next two years – which doctors now believe were repeated UTIs.

‘By the age of 13, Lea was terrified of going to the toilet, because she didn’t want to be in pain,’ says Beth. ‘She would try to hold it in for as long as possible. When she did finally have to go there would always be tears afterwards.’

In 2016, Lea was taken to see a private urologist, who carried out a urine culture and diagnosed her with a UTI. ‘He spotted it instantly,’ says Beth. ‘And then Lea was immediately put on a high dose of antibiotics – the first time she’d ever been offered medication.’

Beth adds: ‘My daughter was repeatedly told her pain was all in her head, when it clearly wasn’t. I don’t want other children to go through the same ordeal.’