Children spent all day with their dead father’s body

A mother who was away when her husband died has described how her children spent a whole day with their dead father’s body.

Helen Daykin is calling on schools to make more checks on pupils who do not turn up after her daughters, aged four and two, were found lying in bed with their father Chris Daykin’s dead body.

When Pearl and Iris did not arrive for lessons the school called Mr Daykin, who had died of heart failure the night before, but did not try calling Mrs Daykin, according to BBC News.

Mrs Daykin eventually got a phone call at 8pm to say her husband had died after her mother had found the windows dark and the milk outside, leading police to break down the door of the home in Halifax, West Yorkshire.

Helen Daykin is calling on schools to check on pupils who do not turn up after her daughters, aged four and two, were found lying in bed with their father Chris Daykin’s dead body

The children said their father was ‘cold’ and they tried putting tablets in his mouth to ‘make him better’, Mrs Daykin said, describing her husband’s death in 2016.

She said: ‘They spent the whole day upstairs, they didn’t come down at all . They were hungry. They played with all my shoes and makeup, but they didn’t venture further in the house.

‘Pearl can tell me every single detail and relives it often. I can’t leave the room without her shouting for me or wanting to be with me.’

The bereaved mother said Pearl, her elder daughter, must have known on some level that her father had died.

Mrs Daykin had rung her husband in the morning and received no response, but thought he was too busy with the children or could not find his phone. She was on a train when she was eventually told of his death.

Chris Daykin was a stay-at-home father who usually looked after his daughters on their way to school, while Mrs Daykin often travelled for work, to London in this case. 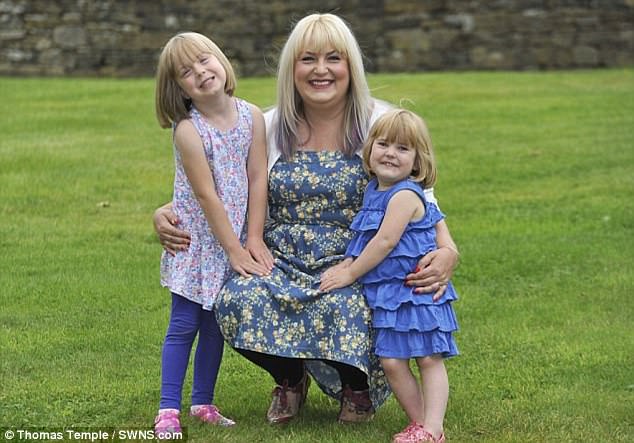 Mrs Daykin, pictured with her daughters, is calling on parents to ask their school about their first-day absence procedures to stop anyone else’s children having to suffer the way hers did

Mrs Daykin is calling on parents to ask their school about their first-day absence procedures to stop anyone else’s children having to suffer the way hers did.

She wrote on Facebook: ‘Please go and ask your child’s school what their policy is on First Day Calling. If you don’t get a satisfactory answer, keep pushing them until you do.

‘If they can’t answer it means they don’t know. That’s not acceptable, push for a better response.’

The Good Grief Trust, which is supporting Mrs Daykin’s campaign, said its founder Linda Magistris had approached her to offer bereavement support and heard about the shocking story.

The trust said it was working with the All-Party Parliamentary Group on Bereavement Support to ‘ensure that this situation never happens to another family in the UK’.