Children with strict parents may be more likely to become depressed, study warns

Parents who are too strict with their children could increase their risk of depression in later life.

Researchers asked more than 1,100 teenagers about their parents, such as how strict they were, if they punished them for doing things which were not allowed, ignored them when they displeased them, made them feel guilty and brought up their past mistakes.

Based on these questions, they selected 23 young people whose parents had a strict, harsh or manipulative parenting style.

They compared them to children of parents with a kinder parenting style, who set rules, but made it clear the rules were because they loved their children, and did not excessively punish or shun them for getting things wrong.

The children with the overly strict parents were found to have changes in activity across many different genes which could make them less able to cope with life’s ups and downs.

Researchers asked more than 1,100 teenagers about their parents, such as how strict they were, if they punished them for doing things which were not allowed, ignored them when they displeased them, made them feel guilty and brought up their past mistakes

Previous studies have linked these genetic changes to depression in later life.

Indeed, a questionnaire showed the 23 children with very strict parents had more depressive symptoms, such as feeling sad, lonely or that people did not like them – although none had clinical depression.

Dr Evelien Van Assche, now at the University of Munster, who led the study from the University of Leuven in Belgium, said: ‘Very strict parenting could change how DNA works, by causing stress in childhood which makes people less resilient to stress in later life, and more prone to depression.

‘The kind of strict parents we are talking about are those who will send their child to their room for not eating vegetables, rather than trying to encourage them to eat them, or shout at them for coming in late, rather than explaining why they should be home earlier.’

The study, presented at the annual conference of the European College of Neuropsychopharmacology, in Vienna, started by asking more than 1,100 children aged 12 to 16 about their parents.

They were given a 64-item questionnaire to fill out.

Children with ‘good parents’ tended to report discussing problems with them, and feeling better and listened to, while being helped to choose their own direction in life. 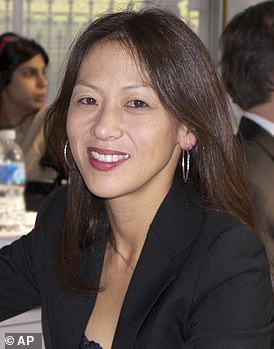 The US academic Amy Chua came up with the name ‘tiger mums’ in 2011 to describe the type of parent.

Her book on how she guided her two young daughters through extra homework, Battle Hymn of the Tiger Mother, became a global bestseller.

Her rules included: only accept exam grades of A or higher and never take part in an activity which isn’t education focused.

Her methods went as far as to ban sleepovers and only allow violin and piano lessons inside her home if traditional homework had been finished.

Those with excessively strict parents agreed with statements such as that their parents punished them, tried to change them, interrupted and blamed them for other family members’ problems, made them feel guilty about errors, and that their parent ignored them or stopped making eye contact when they were disappointed with their behaviour.

Researchers looked at the DNA of 21 children with ‘good’ parents and 23 with highly strict parents, examining more than 450,000 parts of their genetic code.

They were looking at a genetic process called methylation, which works like a dimmer switch, ‘dialling up’ or ‘dialling down’ genes in a way which can affect behaviour.

Children with stricter parents had stronger ‘dimmer switch’ activity across a large number of genes – a pattern of brain activity which is also seen in adults with depression.

The study suggests children with harsher parents are more at risk of depression, although none were actually depressed.

That is because they had more depressive symptoms than the children with ‘good’ parents in a questionnaire.

That meant, for example, they were less likely to report problems like not looking forward to things, feeling sad or losing sleep.

Dr Van Assche said: ‘We discovered that perceived harsh parenting, with physical punishment and psychological manipulation, can introduce an additional set of instructions on how a gene is read to become hardwired into DNA.

‘We have some indications that these changes themselves can predispose the growing child to depression.

‘This does not happen to the same extent if the children have had a supportive upbringing which is less overwhelming.’

Professor Christiaan Vinkers, from Amsterdam University Medical Centre, who was not involved in the research, said: ‘This is extremely important work to understand the mechanisms for how adverse experiences during childhood have life-long consequences for both mental health and physical health.

‘There is a lot to gain if we can understand who is at risk, but also why there are differing effects of strict parenting.’