Chile 2-1 Ecuador: Alexis Sanchez plays on despite twisting his ankle and scores winner

Chile 2-1 Ecuador: Alexis Sanchez plays on despite twisting his ankle and scores winner to take his country into Copa America quarter-finals

Despite another ankle injury, Alexis Sanchez led Chile to the quarter-finals of the Copa America.

Playing in pain after getting hurt in the first half, Sanchez scored a second-half winner to give Chile a 2-1 victory over Ecuador and a spot in the last eight of the South American competition on Friday.

Sanchez stayed in the game after taking pain pills and scored in the 51st minute at the Arena Fonte Nova, securing the two-time defending champions a place in the knockout stage. 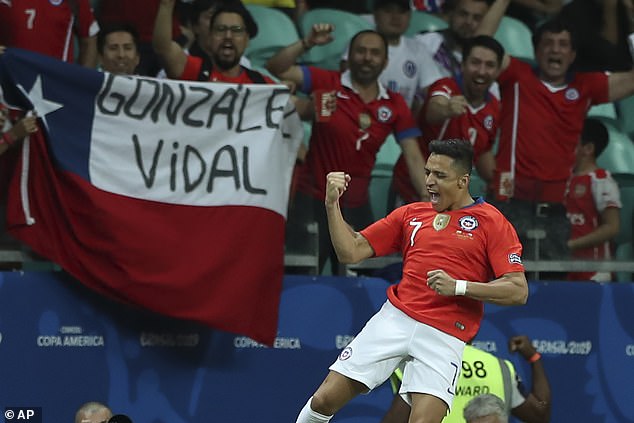 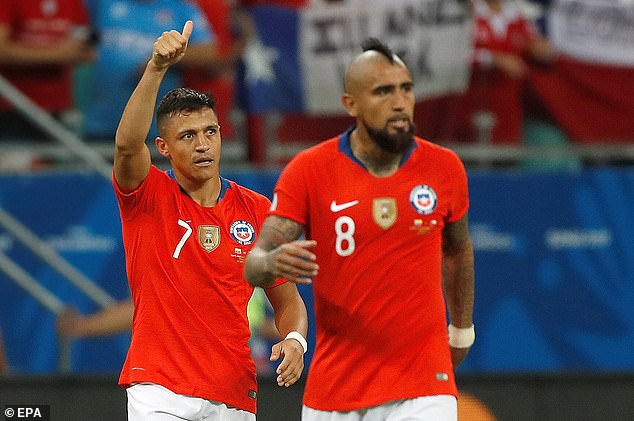 ‘I twisted my ankle. I kept playing for the love I have for this national team,’ he said. ‘When I play for my country, I’m always playing happy.’

Sanchez found the far corner with a clever first time shot over Ecuador goalkeeper Alexander Dominguez after a cross by Charles Aranguiz.

It was the second goal of the tournament for the Chilean forward, who was coming off a difficult season with Manchester United and recovered from another ankle injury – on the right leg – just in time for the Copa America.

‘He is motivated when he is with the national team.’ 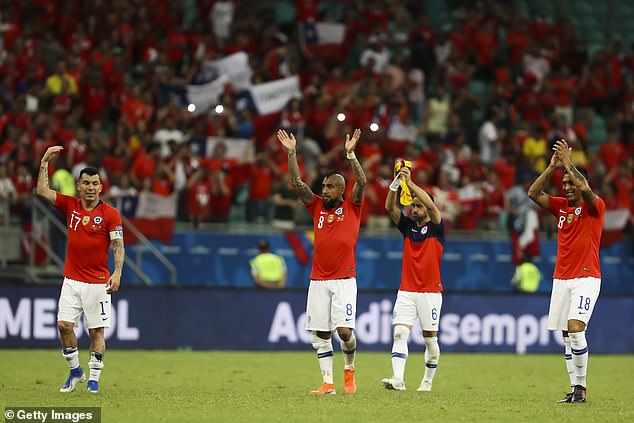 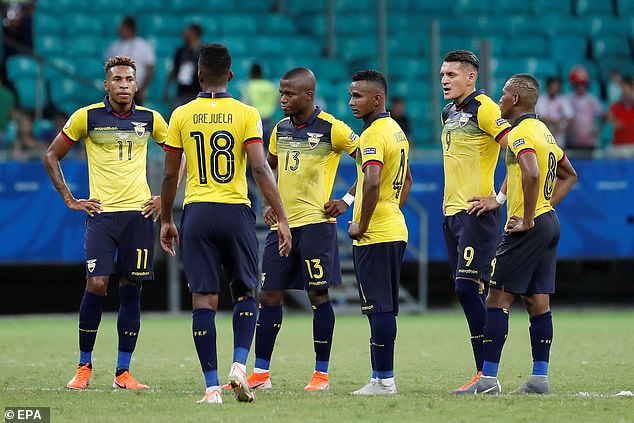 But there was dejection for the Ecuador team following their defeat in Salvador, Brazil 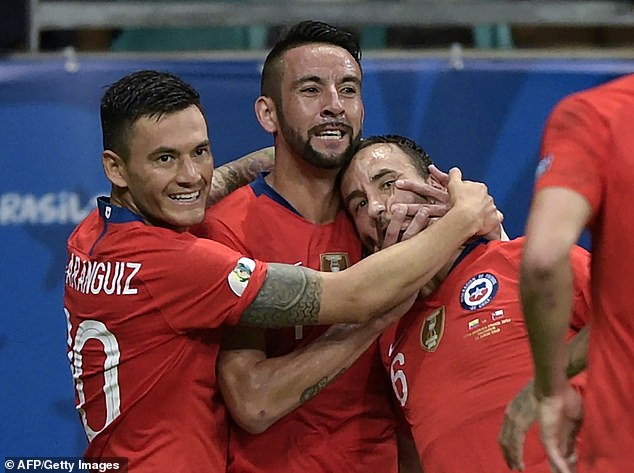 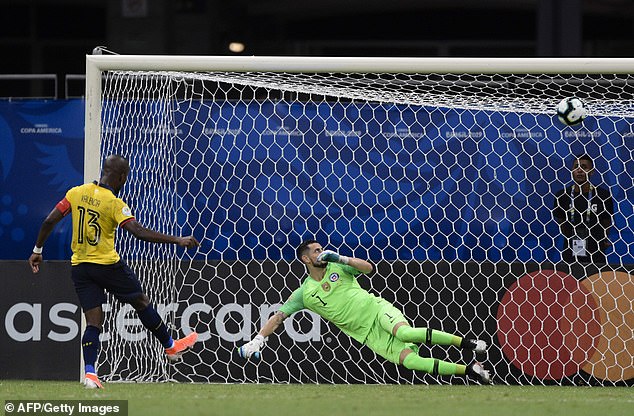 It was Sanchez’s 43rd goal with Chile, who are seeking their third straight Copa title a year after not making it to the World Cup in Russia.

Jose Pedro Fuenzalida put Chile ahead with a strike in the eighth minute and Enner Valencia equalized for Ecuador from the penalty spot in the 26th.

Ecuador played the final minutes with a man down after defender Gabriel Achilier was sent off for elbowing Chile midfielder Arturo Vidal.

The victory gave Chile the lead in Group C with six points, two more than second-place Uruguay, which on Thursday drew 2-2 with Japan. The Japanese squad has one point and Ecuador stayed with zero.

The top two teams in each of the three groups advance, along with the best two third-place finishers. 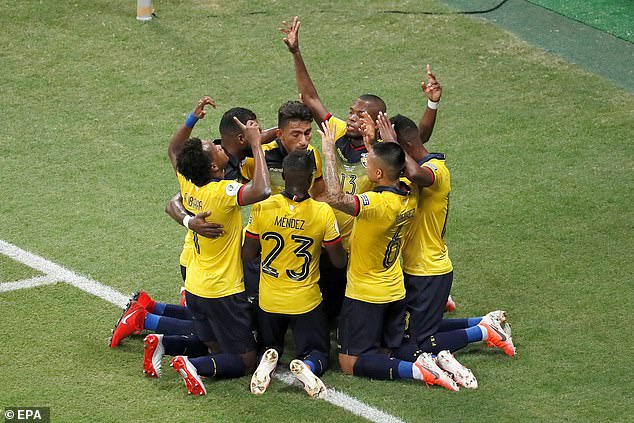 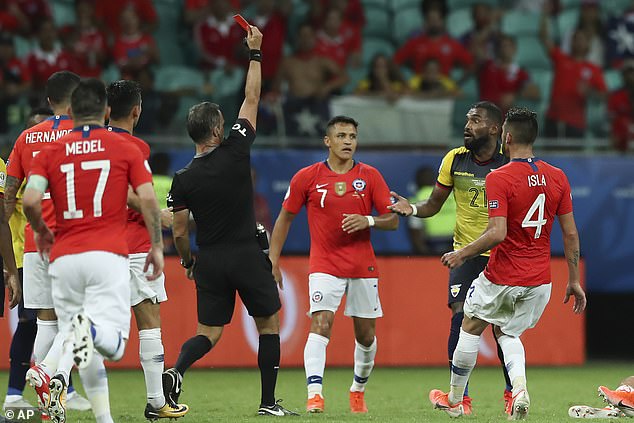 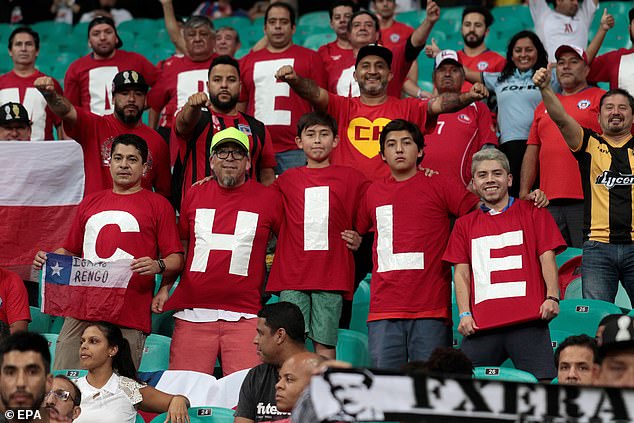 The Chilean win guaranteed Uruguay will finish at least third in the group.

In the last round on Monday, Chile face Uruguay at the Maracana Stadium in Rio de Janeiro, while Ecuador take on Japan at the Mineirao Stadium in Belo Horizonte.

Chile had opened with a 4-0 rout of Japan, while Ecuador lost by the same score to Uruguay.