Chile’s name was on the Copa America trophy, Alexis Sanchez saved the best for last and Lionel Messi’s misery in an Argentina shirt continues

Chile were crowned Copa America champions for the first time in their history after the tournament hosts defeated Argentina 4-1 in a penalty shootout.

Here, Sportsmail’s Rik Sharma takes us through some of the key talking points of the game.

This had to be Chile’s year

Everything was aligned perfectly for them, as they sought to end their 99-year wait to lift the Copa America trophy.

From having the easiest group, to Argentina and Brazil being put in the other half of the draw.

From three red cards shown to their opponents and some dubious refereeing calls, to playing on home soil with thousands of fans cheering them on.

From this being their golden generation, as Arturo Vidal labelled it, to none of the other traditional Copa powers being at their strongest. 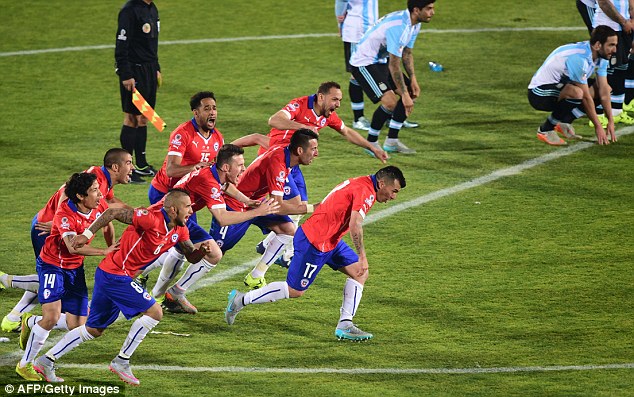 From the streets filled with red Chile shirts to Plaza Italia filled with red smoke from flares, and tear gas infused water cannon dispatches made by unimpressed police.

From the way they attacked the first three games with vigour, notching 10 goals in the group phase, to the way they saved energy and played with more maturity as the tournament progressed.

Coach Jorge Sampaoli has done a wonderful job with La Roja and it would be no surprise to see him move on to bigger and better things – the Argentine may well one day manage his own country.

Chile were the best team at this tournament, even ignoring the numerous extra advantages they had, and reaped their reward.

This had been a perfect season for Lionel Messi. But as has been the case throughout his career, he has suffered on the international stage.

From inspiring Barcelona to the treble, to returning to his spot as the world’s best player – only awaiting confirmation in January’s Ballon d’Or ceremony – things couldn’t have gone better at club level.

The old accusations that he doesn’t do it with his country shouldn’t carry any weight; one only has to watch his mesmeric dribble against Paraguay and his three assists, to see his contribution. 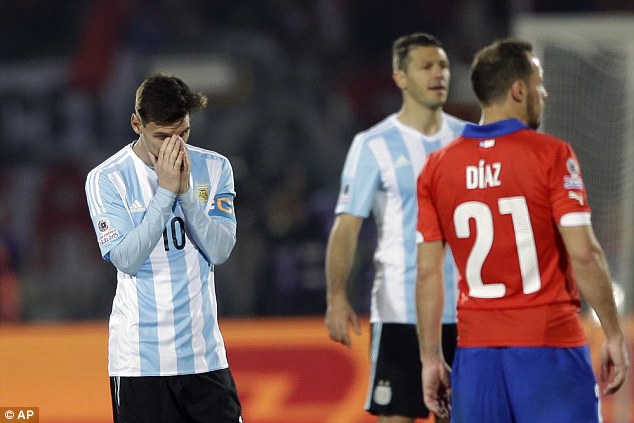 Exactly 22 years ago, on July 4 1993, Gabriel Batistuta struck twice to win Argentina the Copa America against Mexico, and Argentina dreamt that this would be his turn to lead them to glory.

Unfortunately, Messi couldn’t deliver. Playing too deep on the pitch, thanks to Tata Martino’s formation, and hounded by several Chilean players, the Barcelona star was below his best.

He converted his penalty coolly, while his team-mates failed from the spot, and that works as a metaphor for how he is often let down when playing with his country.

It shouldn’t impact on his claim to being the best player ever, but until he wins a trophy with the Albiceleste, the criticism that he has failed with his country will persist.

Alexis Sanchez delivers when it matters most

Chile were worried about their star man, but they shouldn’t have been.

After three wonderful performances in the group stage, Alexis Sanchez’s form dipped. Against Uruguay he was quiet and his performance against Peru was worse.

The Arsenal man seemed tired, exhausted from a long season, and looked to have lost his dynamism, his explosive edge, the factors that set him apart from other attackers in his mould.

But perhaps he was just conserving energy for this game. Sanchez was the best player on the pitch, and although he couldn’t make the difference in normal time, luck saw to it that he won Chile the cup from the spot. 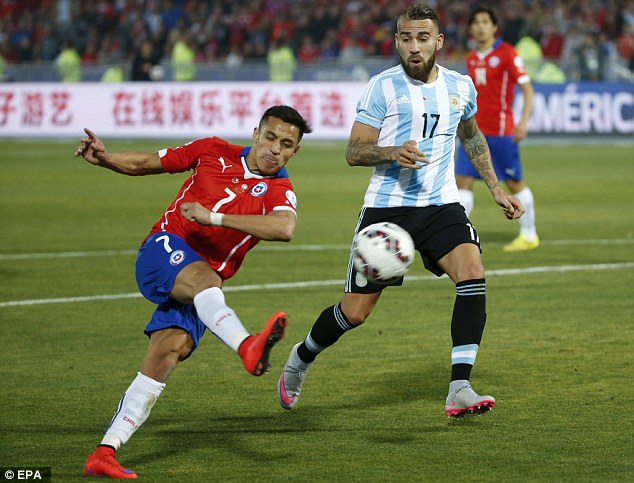 A different type of hero to the likes of Marcelo Salas, but the Tocapila-born forward deserves this moment in the spotlight.

He looked pumped up for the final from kick-off, and while Eduardo Vargas took the glory in the semi-final, Sanchez was his side’s key attacking threat at Estadio Nacional on Saturday night.

A brilliantly taken volley whistled inches wide of the left-hand post, and an bombastic run nearly saw him find a winner in extra-time, but his strike was inches over the top.

No matter. Up he stepped in the shoot-out with the weight of Chile on his back, and he delivered.

Whether Tata Martino left Sergio Aguero on, or chose Carlos Tevez to replace him, either would have been a better decision than to opt for the Napoli man.

Higuain played reasonably against Jamaica and scored Argentina’s winner in that game, but his appearance here was a disaster.

He missed a great chance in the 90th minute, turning Ezequiel Lavezzi’s admittedly over-hit cross into the side netting, instead of the net.

It was lightning striking twice; if Higuain had scored the brilliant chance he had in the World Cup final against Germany last year, Argentina may well have won that. 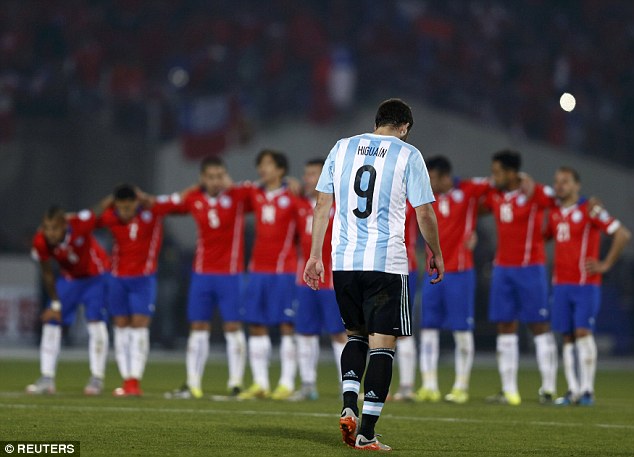 Worse was to follow, with ‘Pipita’ launching his penalty in the shoot-out into orbit, handing Chile the advantage, and they pushed it home brutally.

Arguably he shouldn’t have even been in the squad – Argentina have many young talents like Luciano Vietto and Paulo Dybala, who would have been better selections for a tournament like this.

Tata’s got to go

Tata Martino has some strong accomplishments on his CV. He won the Argentine league with Newell’s Old Boys and took Paraguay to the Copa America final in 2011.

But he does not deserve to be in charge of big clubs, or big countries.

Of the four Argentine coaches at the helm of each of the four semi-finalists in this competition, Martino is the worst.

His squad selection was dubious, and the decisions he made tactically and during matches sometimes bordered on ridiculous.

This was evident from the first game, when he threw on Carlos Tevez and Gonzalo Higuain while trying to hold a lead against Paraguay – they promptly threw it away. 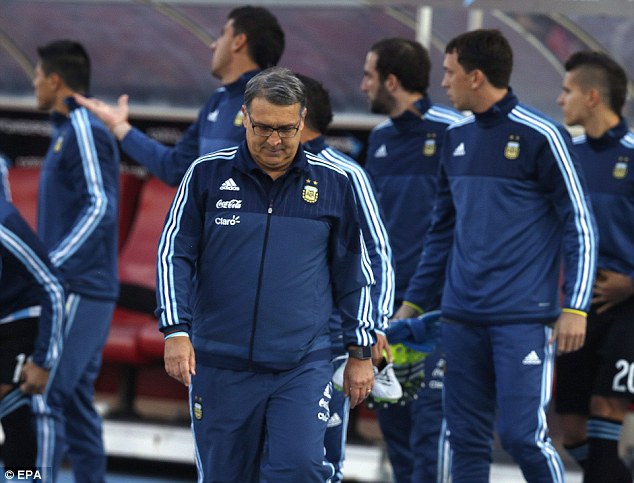 Only against the same team in the semi-finals did Argentina play anywhere near to the level that this group of players should be capable of producing regularly.

Playing under Martino is like driving with the handbrake on for men like Messi, Aguero and Angel di Maria.

His misuse (or, rather, lack of use) of Tevez is a mystery, and Ever Banega would have been a more adventurous choice than Lucas Biglia in the middle.

When Banega was brought on in the final, it was for Javier Pastore – a defensive substitution as Argentina settled down for extra-time.

And at the end of those 30 minutes, Martino got what he deserved.

Sampaoli, the man in the opposite dug-out would be a far better choice as manager.