Footage shows the 23-year-old outside Club Bayview in Perth shortly after midnight on 9 June, 1996.

Her decomposed body was found naked in bushland five days later by a family picking lilies.

Footage shows the 23-year-old (behind the group of men in this image) outside Club Bayview in Perth shortly after midnight on 9 June, 1996 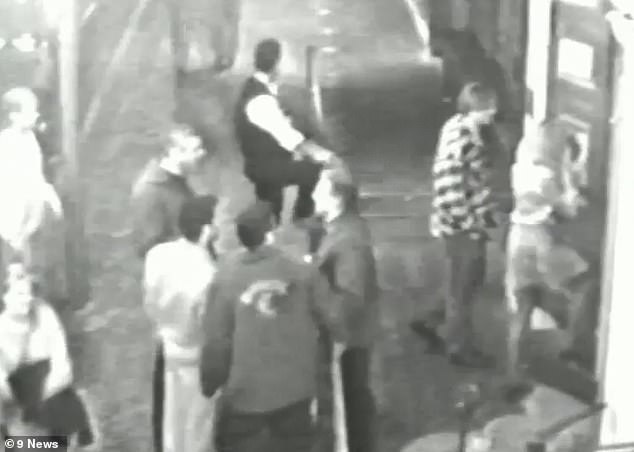 CCTV shows Jane Rimmer (bottom left) standing outside the hotel. There is a 32-second gap in the footage while other cameras around the hotel were recording instead

On the night she vanished, Ms Rimmer had separated from her friends who decided not to enter Club Bayview after other visiting bars because the line was too long.

CCTV shows her standing outside the hotel. There is a 32-second gap in the footage while other cameras around the hotel were recording instead.

When the footage returns to the spot where Ms Rimmer was standing, she had disappeared.

‘In that 32-second period, it’s like she just vanished,’ state prosecutor Carmel Barbagallo told the court.

Ms Rimmer is one of three women who are believed to have been killed by a serial killer in Claremont, Perth in 1996 and 1997.

The confessed rapist also remained impassive as the prosecutor detailed the gruesome discoveries of Ms Rimmer and Ms Glennon’s bodies in bushland, and how loud, high-pitched screams were heard in nearby Mosman Park on the night Ms Spiers went missing.

Sitting in the front row of the full public gallery, Ms Spiers’ parents Don and Carol heard the last recording of her voice as she called for a taxi.

She was gone by the time the vehicle arrived and was never seen again.

Grim descriptions of the other women’s injuries were endured by Ms Glennon’s father Denis, her sister Denise and Ms Rimmer’s mother Jenny. 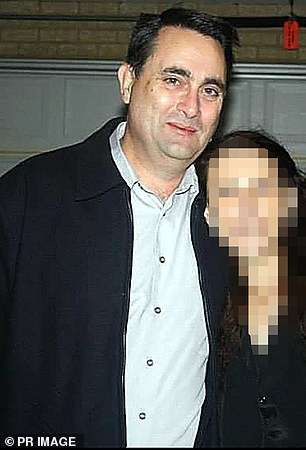 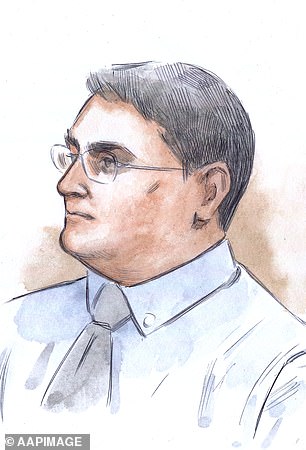 Bradley Robert Edwards (pictured left in an undated photo and right in a court sketch) 50, is accused of committing the Claremont serial killings in 1996 and 1997

Both women had neck injuries inflicted in a cutting or ‘even a sawing action’, Ms Barbagallo said.

They were partly decomposed and largely covered by vegetation.

Ms Rimmer was face down and naked, and parts of her body that weren’t covered by branches were damaged from animal predation, Ms Barbagallo said.

Dozens of reporters are covering the trial, with those not able to secure a seat watching proceedings via video link in three other rooms, but there appeared to be just enough seats for member of the public.

A sudden hush fell over the room 10 minutes before the trial got under way as the magnitude of the long-awaited events about to unfold sunk in. 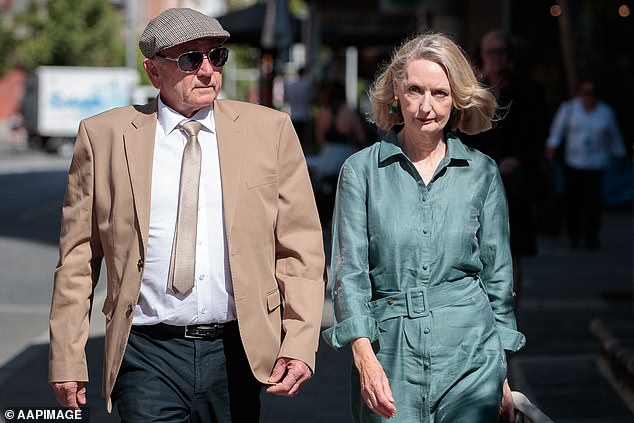 Don Spiers and Carol Spiers ,the parents of Sarah Spiers arrive at the Supreme Court of Western Australia in Perth, Monday

DAY ONE OF THE CLAREMONT MURDERS TRIAL – WHAT HAPPENED:

– Graphic details of Ms Rimmer’s injuries were revealed, including her left arm bent unusually, consistent with being dragged and put into position before rigor mortis took hold

– Ms Glennon was seen walking briskly away from the entertainment district, ‘anxious to get home’ and either accepted a lift or was ‘abducted in a blitz attack’

– In a list of 37 admissions, Edwards agreed Telstra issued 4200 wooden-handled pocket knives to its WA workers between mid-1993 and October 1996

– One was found near where Ms Rimmer’s body was dumped

– A vehicle fitting that description was seen in Mosman Park, where a woman’s screams were heard on the night Ms Spiers went missing

– Photos were shown of drag marks at Karrakatta cemetery where the girl was raped, and cords used to tie her up

– The descriptions varied, including the man’s age, but were ‘broadly consistent’

– In one case, a woman accepted a lift from a man who had done a U-turn and approached her. He told her he worked on installation sites and did not have to pay for petrol. He also said he looked for ‘damsels in distress’ like her and later tried to kiss her but stopped when she pushed him away. 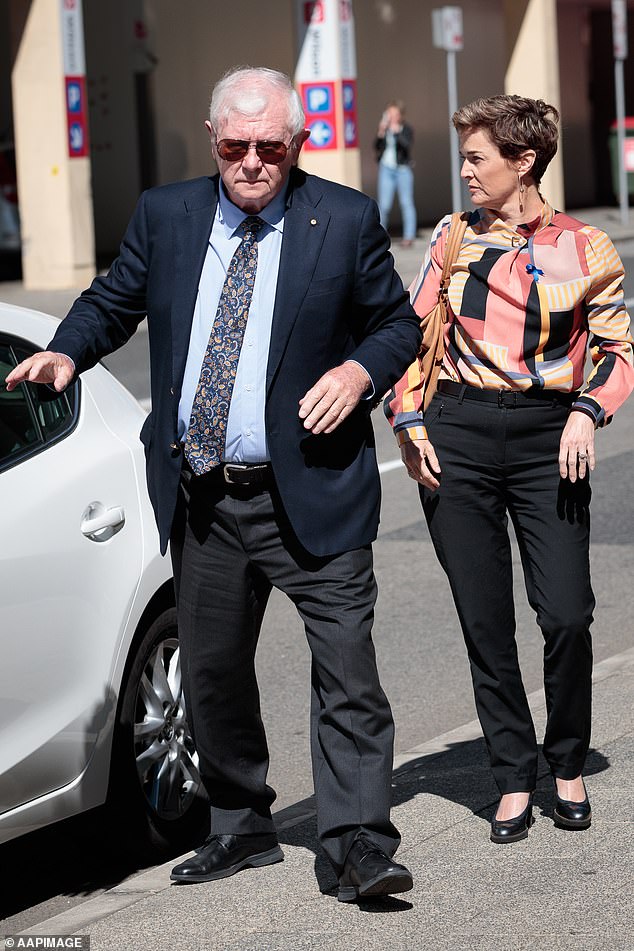 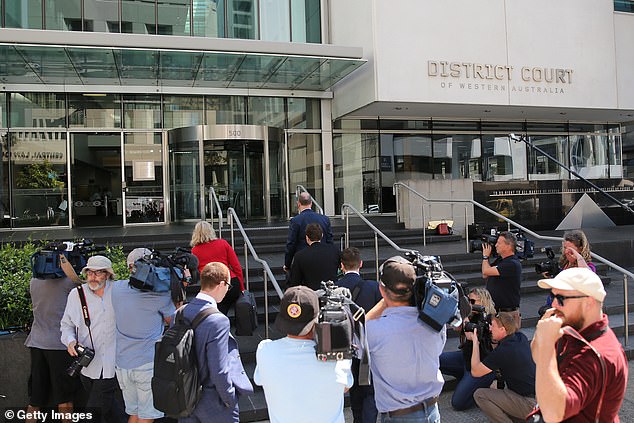 Justice Stephan Hall warned the public against any outbursts, adding Edwards was presumed innocent of the murders and it was for the prosecutors to prove his guilt

– Secretary Sarah Spiers, 18, disappears after leaving Club Bayview in Claremont after calling a taxi from a nearby phone booth. Her body has not been found.

– Childcare worker Jane Rimmer, 23, similarly vanishes in Claremont and is last seen outside the Continental Hotel

– Ms Rimmer’s body found by a mother and her children picking flowers in Wellard, south of Perth

– Bradley Robert Edwards, 48, from Kewdale, charged with eight offences related to two of the deaths and the two other attacks, but no charges laid over the disappearance of Ms Spiers. Edwards remanded in custody.

Edwards was also charged with the wilful murder of the third victim, Sarah Spiers

– A judge-alone trial begins and is expected to last for nine months.