Chilling CCTV shows a killer carrying on as normal as he orders a McDonald’s for dinner less than 24 hours after murdering his own father in a hammer and knife rampage.

Daniel Seggie visited the fast food restaurant as his father Geoff’s butchered and decomposing body lay inside the house they shared together in Mackworth, Derby, a documentary reveals.

Seggie, 33, who stabbed his father more than 60 times in the head, neck and chest with a 12 inch blade before beating him 20 times with a hammer, also withdrew money from a cash machine, visited A&E for a cut on his finger, and enjoyed a Chinese takeaway.

Detectives said the evidence showed the 59-year-old was alive and struggling for at least part of the brutal assault that took place in his own bedroom. 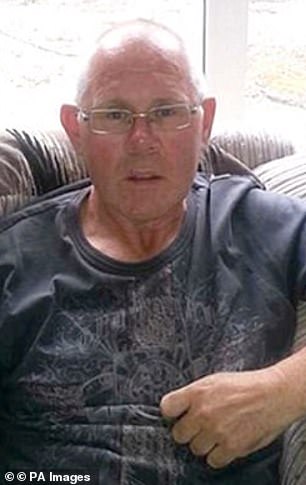 Seggie (left) stabbed his father (right) more than 60 times in the head, neck and chest with a 12in blade before beating him 20 times with a hammer

After two days Seggie – who later admitted murder but never gave a reason why he did what he did, went on the run with Geoff’s car and remained on the run for seven days as he travelled to Cardiff, then Glasgow.

He was eventually tracked down by police after contacting his girlfriend Zoe Spence, sending her series of haunting texts in which he told how his ‘mind was broken’ and he had ‘woken up in a nightmare.’

His movements in the hours and days after the brutal murder on November 29, 2016, have been analysed in What the Killer Did Next, to be shown on Crime + Investigation next week.

Psychologist Emma Kenny tells the programme: ‘When he goes to McDonald’s, to get some dinner, you can’t help but question what was going through his mind. 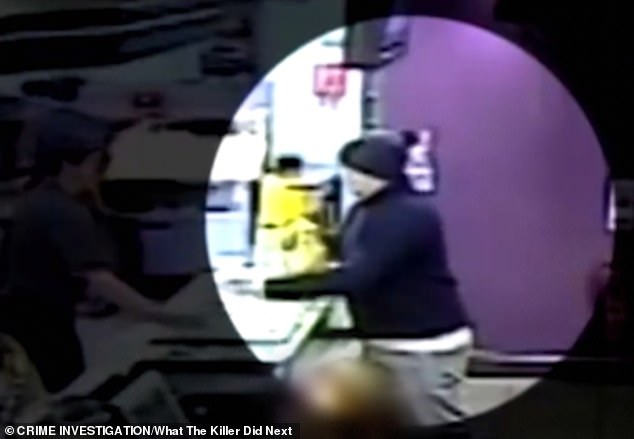 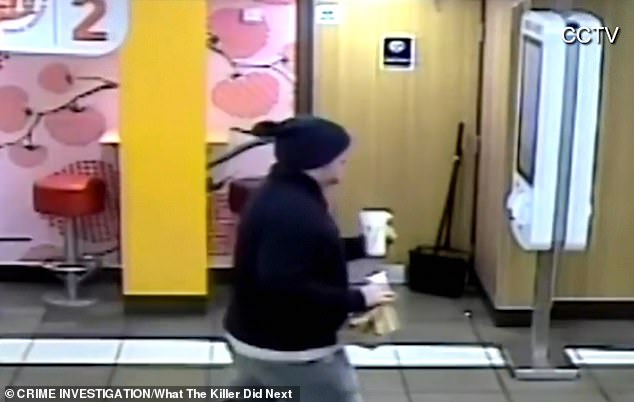 Seggie was caught om CCTV in various locations around Derby, including in McDonald’s 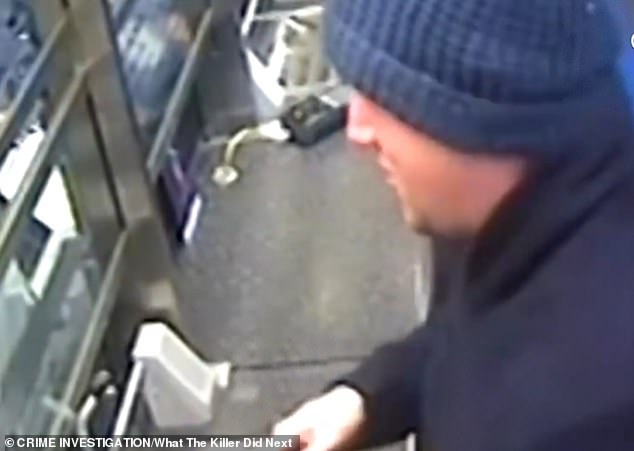 He was also filmed smirking as he visited a bank to withdraw money, chatting happily with the cashier before he went on the run

The last thing you would imagine he would be thinking about is his tummy, after he’s murdered somebody violently.

‘But doesn’t that show, potentially, some real disassociation? As in, he’s done it, but he’s not really contemplating the enormity of his actions – so he just carries around his normal business.’

His girlfriend Zoe Spence says: ‘He was just acting like it was every day life.

‘Like, he was just carrying on. He was, like, smiling and smirking. It was just out of character for him. It’s not something you’d ever expect.’ 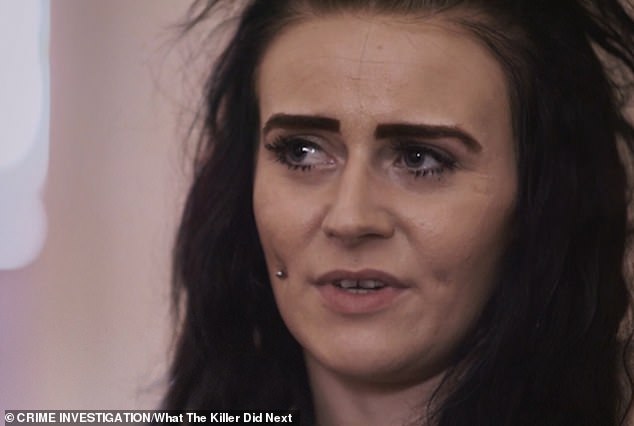 Zoe Spence was in a relationship with Seggie. She received a number of text messages from him when he was on the run from police after murdering his father 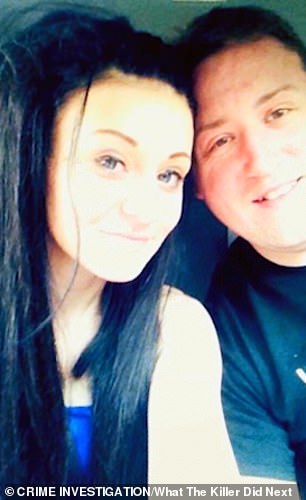 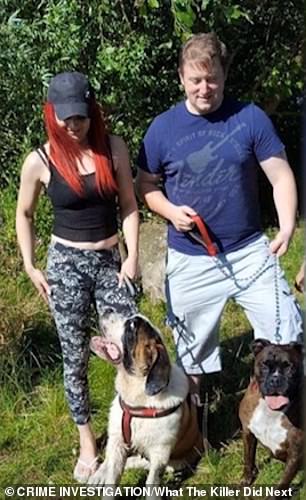 Seggie pictured with Miss Spence (left and right). She told the programme she still ‘defends’ him even after what he has done

Criminologist Dr Jane Monckton-Smith tells the documentary how the fact he stayed in the house with the body for two days shows he felt ‘justified’ in what he did.

She said: ‘I find it strange that he stayed in the house with the body for two days, because there is so much anger – so much anger – in that killing, and he stays there.

‘At some level, he’s thinking, I’ve done the right thing. I’m justified in what I did. He’s not frightened of his own violence.

‘He’s not frightened of what he’s done. He stayed there, with the body – he’s comfortable being there with the body.’

During the two days he remained at the house, he pretended to be his father by texting his mother and brother Ben from his phone, and arranged for £100 to be transferred to his account.

He also visited hospital on the night of the murder because he had a small cut on his hand. He messaged Miss Spence a photo of the injury with the words ‘I have been a brave little soldier…LOL.

Miss Spence later reveals some of the texts Seggie sent her when he was on the run. 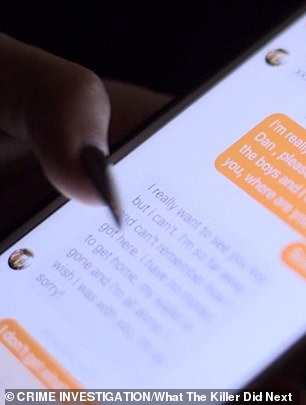 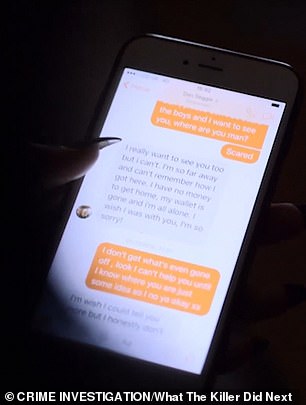 Some of the texts sent to Miss Spence from Seggie. One said: ‘My heart is broken, but also my mind. I have no idea what has happened this past week

‘My heart is broken, but also my mind. I have no idea what has happened this past week.

‘It’s like I’ve been asleep for a week, and woken up in a nightmare. I’m so scared and confused. I honestly don’t know what to do. All I want to do is hug you.’

Another said: ‘I’m so far away, and I can’t remember how I got here.

‘I have no money to get home. My wallet is gone, and I’m all alone. I wish I was with you. I’m so sorry. I’m somewhere north.

‘I wish I was okay, but I’m tired and alone, and I feel so confused. I don’t want you to worry. I will be okay, and I love you.’ 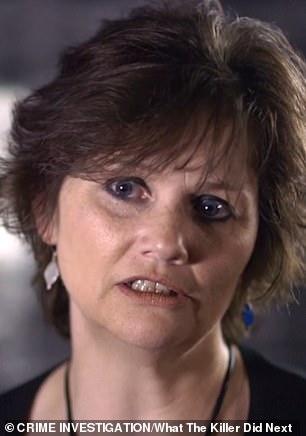 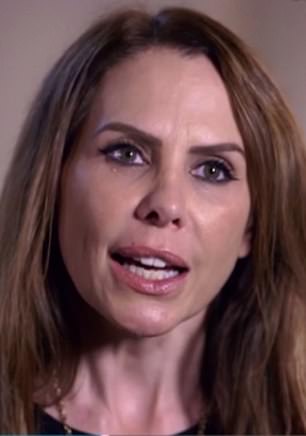 Through this series of text messages Seggie was traced to a hotel in Scotland. Police moved in an arrested him five days after going on the run.

Seggie admitted murder and showed no emotion as he was jailed for life at Nottingham Crown Court and sentenced to a minimum of 20 years behind bars.

Miss Spence says: ‘It’s still a massive shock even, like, a year down the line, because, you know, people ask me about him, and I’m still there defending the guy.

‘Dan, I’ll still always stick up for. He was always the guy that never did anything wrong to me. He always supported me. He always had my back.

‘It still seems unbelievable, but obviously the evidence is there – he’s been sentenced, and he’s gotta do his time. But, I try and forget about that, and just try and think about the good Dan, and the good times we had, and try and blank that bit out.’

In an impact statement during his trial his mother, Cheryl Seggie, said she ‘hated’ what her son had done in attacking her husband.

Sentencing, Judge Dickinson told Seggie: ‘It was a savage and merciless attack.

‘You killed your father in his own bedroom in the house that you shared in Mackworth, Derby.

‘You not just killed your father but deprived your brother of his father and you deprived your mother of a person she still cared about.

‘In total, there were 60 knife wounds and, in addition, there were injuries inflicted by a hammer.

‘What has to be recognised is that your father suffered, he had defence injuries that show he tried to fight or fend you off for some time. 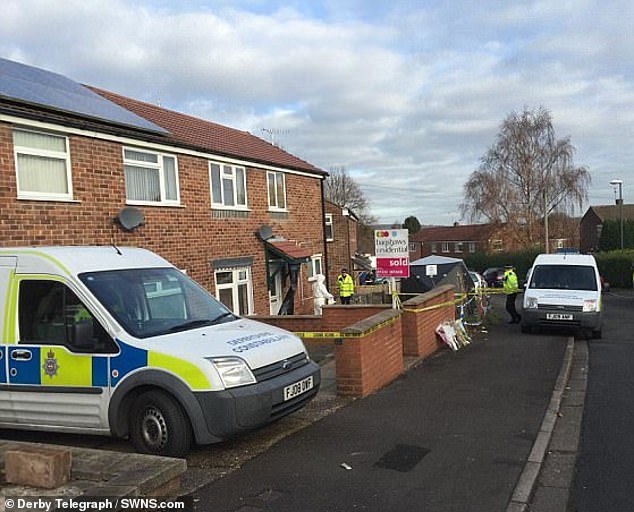 Forensic officers at the house in Mackworth, Derby, where Seggie carried out the brutal killing in November 2016

‘You did nothing to raise the alarm but you did think about yourself, taking yourself to hospital to be treated for a cut to your hand.

‘You even texted your girlfriend to say ”I have been a brave little soldier.. LOL.”

‘You remained living in the house that night and the next day. In terms of the motivation, you say you have no recollection of what you did.

‘This was no spur of the moment event, there was at least some degree of planning.’

Michael Evans QC, prosecuting, said: ‘Due to the savagery of the attack, Geoffrey was unlikely to have survived.

‘It was sustained and brutal and, after Daniel Seggie carried it out, he went to seek hospital assistance for his own injury to his hand.

‘After that, he returned to the house where his father lay dead for two nights before making sustained attempts to cover his tracks.’

Mrs Seggie said in her statement: ‘As a mum I never expected this ever. I may never see Daniel leave prison ever but Ben has lost his dad and lost his brother and I cannot believe what Daniel has done.

‘I feel very conflicted. Ben has had everything taken away from him but Daniel is still my son and I love him and Ben. I hate what he has done but I will always be his mum.

‘I wish Daniel would tell us the reasons why he has done what he has done but I don’t suspect he ever will.’

In a statement Ben said: ‘Geoff was an amazing dad.

‘He was always there for his family and friends. Life will never be the same without him. We miss him so much.’

Michael Auty QC, defending, said Seggie had been assessed by three separate psychiatrists and none of them were ‘able to assist him in a trial’.

He said: ‘A major aggravating feature in this case is the nature of the attack. It is clear this was a frenzied attack but what brought it about really remains a mystery.

‘It is hard to imagine the suffering Cheryl Seggie is going through.

‘What she begs for in her victim personal statement I can’t tell her – and that is why Daniel Seggie did this.’

Dr. Jane Monckton-Smith tells the documentary: ‘The controversial part is that he won’t say what that motivation is.

‘But there is one – there’s always a motivation, with all murders. And, him refusing to say what it is means it’s very personal.’

What The Killer Did Next is on CRIME+INVESTIGATION® on Monday February 18 at 9pm. The series is available on all catch up and on demand services.