The survivor of a chimpanzee attack five years ago has now opened a new trauma care program at St Louis University Hospital in Missouri.

Andrew Oberle Jr, 31,  was a graduate student working at the Jane Goodall Institute’s Chimp Eden in South Africa when he was mauled by two chimpanzees.

The then-26-year-old was pulled under an electric fences and dragged half a mile before a manager at the institute was able to stop the animals.

Oberle underwent dozens of reconstructive surgeries after the attack left him torn open from his skull down to his feet.

He lost one of his ears, nose, most of his fingers and both feet, but Oberle has used the situation to form the Oberle Institute and help others who are recovering from trauma. 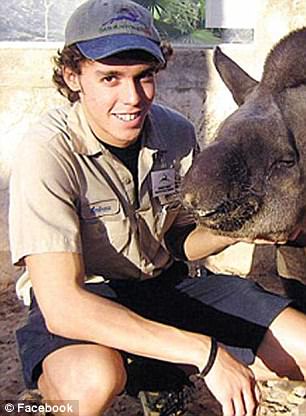 Five years ago, Andrew Oberle Jr, 31, was attacked by two chimpanzees at the institute he was working at in South Africa. Left is Oberle in June. He had to get a bionic hand after the attack because he lost most of his fingers. Right is him at Chimp Eden before he was attacked 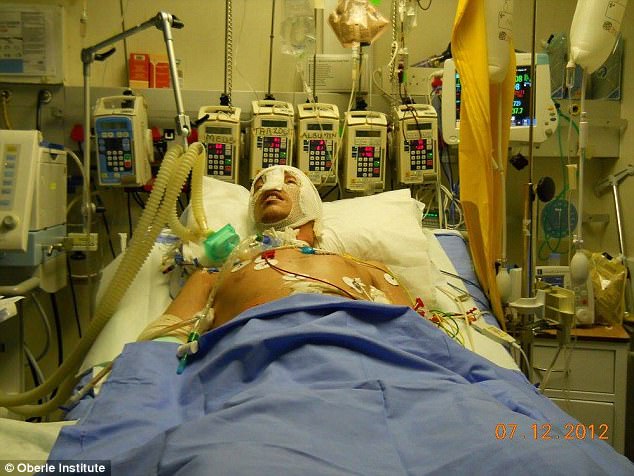 Oberle was taken to a Johannesburg hospital in South Africa to prevent infection and keep him alive. He suffered from open wounds from his skull all the way down to his feet

On June 28, 2012, Oberle was giving a tour at the institute when the two chimpanzees attacked.

He was working at the sanctuary as part of his graduate program at the University of Texas- San Antonio for his degrees in anthropology and primatology.

Oberle had an interest in being a zookeeper since he was young and had a special fascination with chimpanzees.

Alpha males Nikki and Amadeus pounced on him during the tour after they broke out of their habitat. 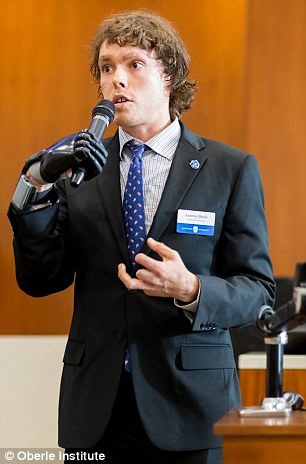 Oberle created the Oberle Institute with St. Louis Hospital in Missouri to help others who have experienced significant trauma. Here he is telling his story at an event in June

No one knows what enraged the animals, but they attacked Oberle and dragged him underneath the electric fence of their habitat.

The institute said it was the first attack they had since they opened six years prior to the incident.

Oberele was dragged almost half of a mile before a manager at the institute was able to scare the animals off.

The manager fired his gun into the air, which stopped the chimpanzees from attacking Oberle and they ran away.

All Oberle remembered from the attack screaming and seeing the chimpanzees on him before waking up three weeks later in a Johannesburg hospital in South Africa, according to the St. Louis Post-Dispatch.

He had to be airlifted from the institute to the hospital where doctors placed into a medically induced coma in order to stabilize him and prevent infection.

The attack left Oberle with open wounds from the top of his skull down to his feet.

He lost his ear, nose, most of his fingers, both feet and muscle and tissue down the sides of his body.

Doctors transferred Oberle to St Louis University Hospital in August 2012 after he was stable enough to be transported from South Africa.

He remained in the hospital for a month before he was transferred to a rehabilitation clinic for six weeks to re-learn how to use parts of his body. 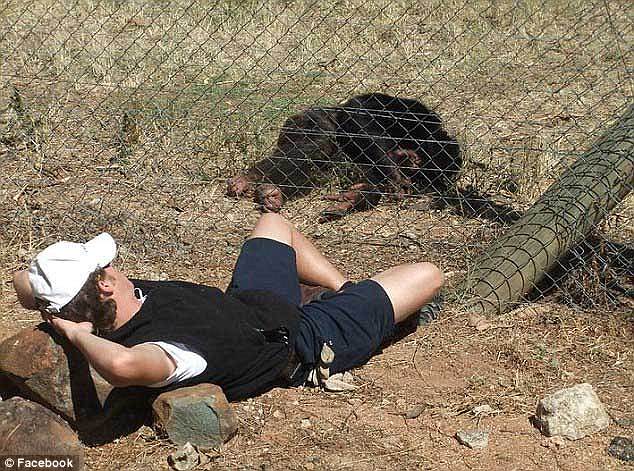 He was at the institute because he always wanted to be a zookeeper and had a special interest in chimpanzees. He was mauled after giving a tour to people

Since the attack, Oberle has moved past the incident and recovered. He is now engaged to a Vanessa Cowart who he met two years ago (pictured left) and has a three-month-old daughter (pictured right)

Over the next couple of years, Oberle went under 26 different surgeries to repair the damage from the attack.

His plastic surgeon at the St. Louis University Hospital, Dr Bruce Kraemer, told the Post-Dispatch that it was the worst animal attack he had ever seen in his career.

Oberle had four surgeries alone to reconstruct his nose.

He now has a bionic right hand after the attack left most of his fingers torn off.

His left wrist was destroyed, so doctors had to repair all the tendons in it in order for him to use it again.

He also has prosthetic’s where both of his feet were because they were past the point of repair.

Even though Oberle has suffered from a lot of injuries from the attack, he says he doesn’t blame them for what happened that day.

‘I don’t blame chimps at all,’ Oberle said to the Post-Dispatch. ‘They’re wild animals. You can’t know what’s going to happen.’

The now-31-year-old hasn’t let the injuries from the attack stop him from living his life.

He has since become engaged to Vanessa Cowart who he met two years ago.

They now have a a three-month-old daughter together named Lily.

Oberle created the Oberle Institute with St. Louis Hospital this year to help others who have experienced trauma.

The institute has a team of counselors, surgeons, and therapists to work with trauma patients while the heal both emotionally and physically.

Oberle serves as the director of development at the institute where he helps raise funding for the program and acts as a patient advocate.

The institute is expecting to see its first patient in February. 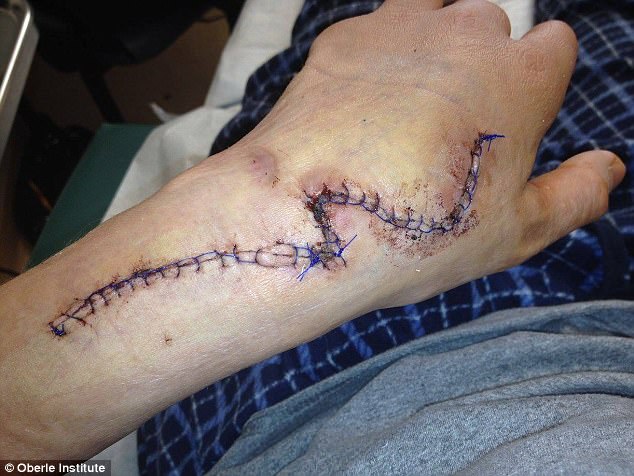 One of the injuries Oberle suffered from was to his wrist. He had to have most of the tendons fixed in order for him to use his left hand again 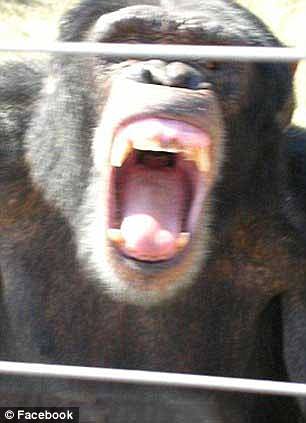 The two chimpanzees that attacked him were said to have a rough life before they were brought to the institute. Pictured left is Nikki and right is Amadeus