China has allowed the pictures of yesterday’s Hong Kong protest to be shared on social media in an apparent bid to fan public anger after censoring the city’s ongoing anti-government demonstrations for more than a month.

This is the first time China’s authorities have let images of the Hong Kong protests circulate online and one expert said it showed Beijing’s apparent attempt to control the public’s opinions on the protests.

Tens of thousands of protesters marched through the streets of central Hong Kong yesterday to demand an independent enquiry into police brutality which took place during rallies last month.

The Chinese emblem outside Beijing’s representative office in Hong Kong was splattered with black ink by protesters during a rally yesterday evening. Beijing’s spokesperson today condemned the ‘radical demonstrators’, saying their behaviour must not be tolerated 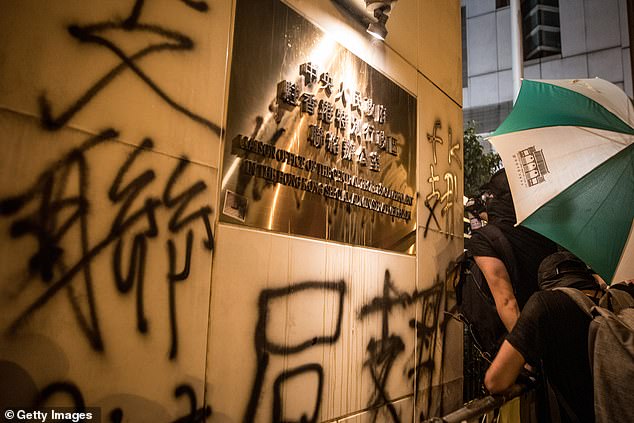 The organiser claimed 430,000 people attended yesterday’s event while police reported the figure to be 138,000.

In the evening, protesters descended on the Liason Office, the department that represents China’s central government in Hong Kong. 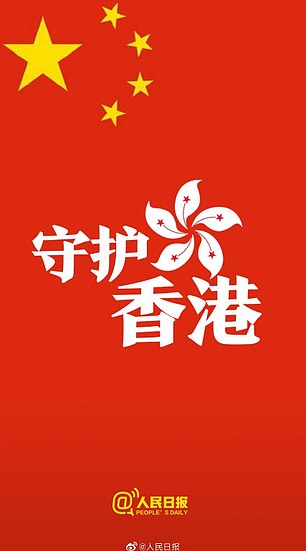 The government building situated in Sai Wan District was pelted with eggs and daubed with graffiti.

Riot police fired tear gas and rubber bullets at the protesters hours after to disperse the crowds.

One image circulating on China’s Twitter-like Weibo shows the Chinese emblem outside the Liason Office splattered with ink.

Others capture the anti-government graffiti written outside the office.

Weibo pictures also show a group of white-clad mob beating passengers and protesters at a subway station in Yuen Long.

The club-wielding gangs, rumoured to be triads from nearby villages, have been praised by web users in China, who said they ‘guarded their homeland’ and ‘fought separatists supporting Hong Kong’s independence’.

China’s state newspaper People’s Daily is calling on web users to ‘safeguard Hong Kong’ with a poster showing both the flag of Hong Kong and the national flag of China.

The paper – the mouthpiece of the Communist Party – said protesters attacked China’s national sovereignty and openly taunted the ‘one country, two systems’ principle. 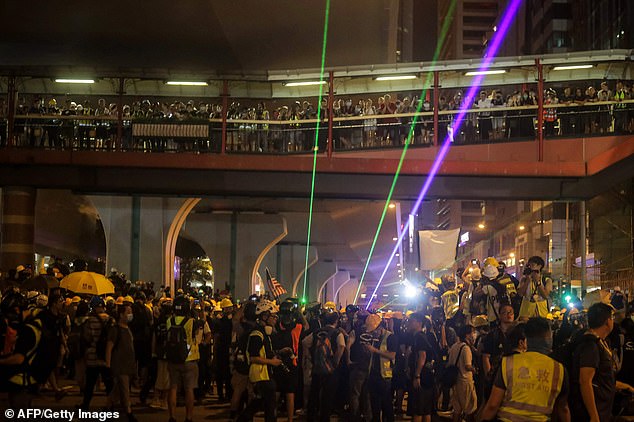 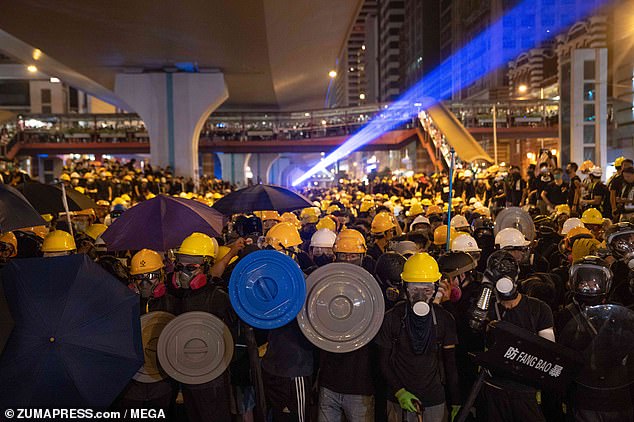 Protesters with helmet and homemade shields seen during the stand off with the police. Officers later used tear gas and rubber bullets in dispersing the crowd 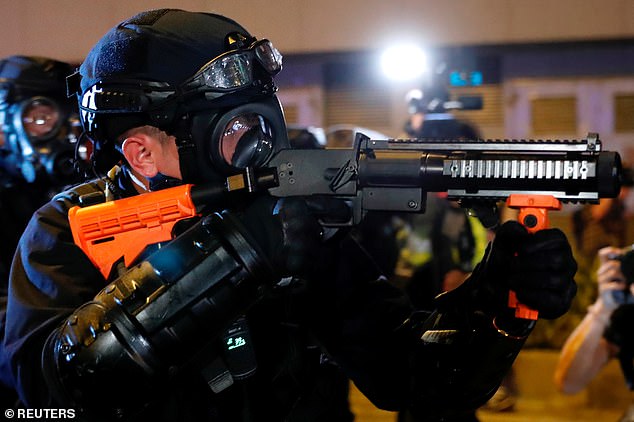 Riot police use bean bag round to disperse anti-extradition bill demonstrators. Hong Kong has been plunged into its worst crisis in recent history by weeks of marches and sporadic violent confrontations between police and protesters 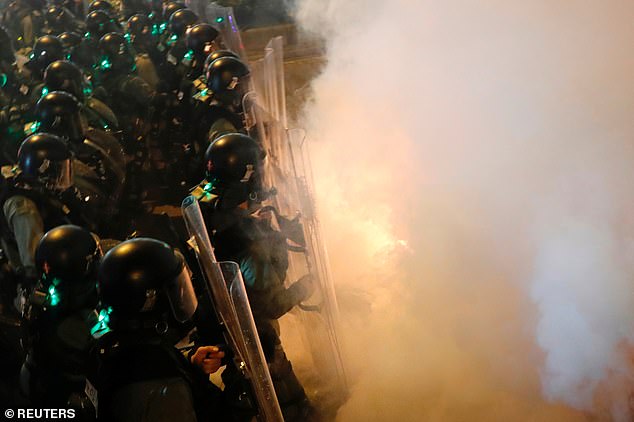 Acrid clouds of tear gas wafted through the city’s densely packed commercial district as police battled masked protesters after another huge protest march, with seemingly no end in sight to the turmoil engulfing the finance hub

China’s Foreign Ministry said today the behavior of ‘some radical demonstrators’ in Hong Kong ‘touched the bottom line of the one country, two systems principle and must not be tolerated’.

Footage of workers of cleaning the Chinese emblem after the protest has also been released by China’s state broadcaster CCTV.

CCTV said in prime-time news that ‘all walks of life in Hong Kong condemned the violent behaviour of radical demonstrators’ before citing the city’s former Chief Executives Tung Chee-hwa and Leung Chun-ying.

Both ex-Hong Kong leaders criticised the activists’ behaviour and called for legal punishment on them.

One expert told The Wall Street Journal that China seemed to be trying to control the narrative of the Hong Kong protests after news of the rallies had reached mainland despite censorship efforts. 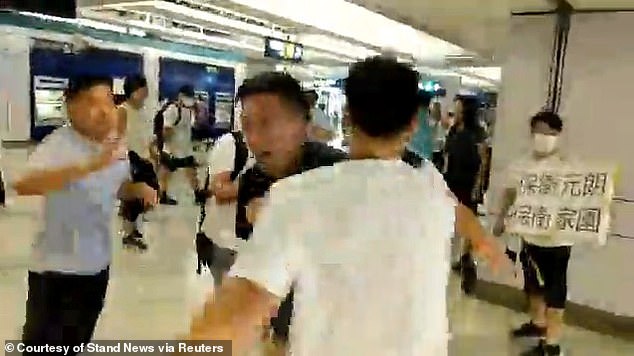 Hong Kong’s roiling unrest took a dark turn late Sunday when gangs of men – most wearing white T-shirts and carrying bats, sticks and metal poles – set upon anti-government demonstrators as they returned from another huge march earlier that day 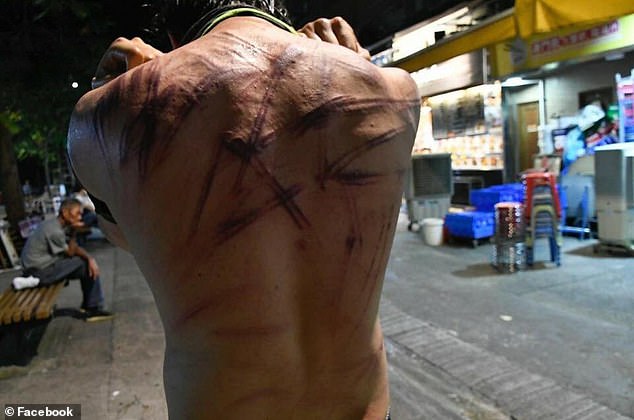 A protester shows his injuries after last night’s attack at the train station carried out by triad members. Critics rounded on the city’s embattled police force by accusing them of colluding with those who carried out the attack 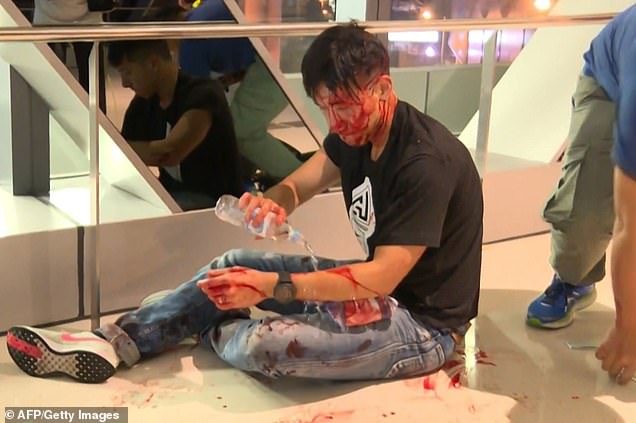 Hong Kong has been rocked by anti-government protests since the beginning of June.

The rallies were first sparked by a proposed extradition law which would allow criminal suspects in Hong Kong to be sent to mainland China for trial.

Lam said earlier this month an extradition bill was ‘dead’, admitting the government’s work had been a ‘total failure.’

Mainland Chinese media had largely avoided reporting the Hong Kong protests. Pictures and footage related to the demonstrations had been hard to find on Chinese social media until today.