The theft of a thumb of an ancient Terracotta Warrior statue on display in the U.S. incited a wave of criticism on Chinese social media Tuesday, following China’s calls to ‘severely punish’ the thief.

The Chinese public have taken to Weibo, the Chinese equivalent to Twitter, to express their anger over the damage of the 2,000-year-old artefact, which is considered ‘invaluable’ by the Chinese.

One person questioned ‘why did we lend our treasure to the U.S’ while many insisted ‘appropriated compensation’ be given by a museum in Pennsylvania, where 10 of the figures are on display. 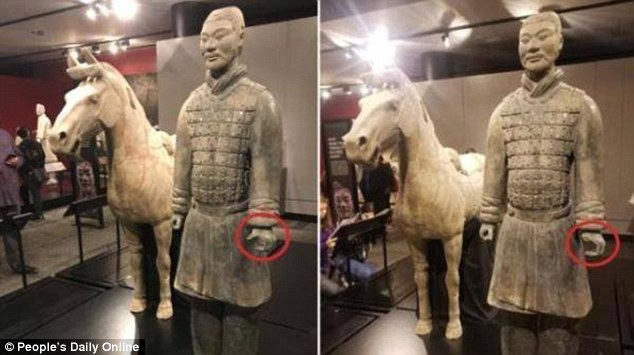 A compilation picture shared by Chinese media show how the Terracotta Warrior statue was damaged. The particular statue has been loaned along with nine others to a museum in U.S. 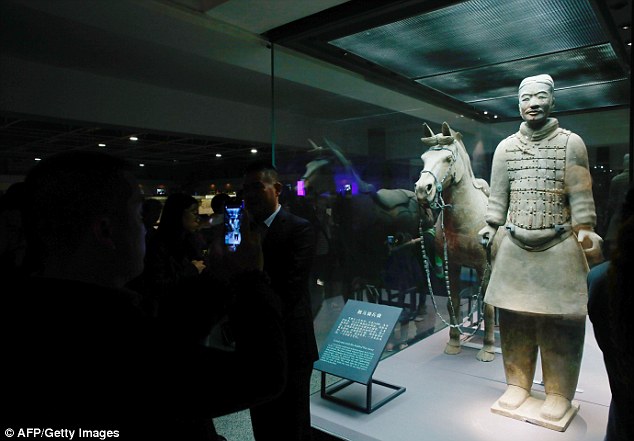 A number of other Chinese commentators were so livid they even suggested the thief’s thumb should be cut off.

Michael Rohana, 24, has been arrested over the theft during an after hours ‘ugly sweater party’ just before Christmas at the Franklin Institute in Philadelphia.

The museum is holding an exhibition to display 10 life-size clay soldiers and over 170 other artifacts from China’s pre-Qin, Qin, and Han dynasties from September last year to March 4 this year.

According to an arrest affidavit filed by an FBI agent, Rohana snuck into the closed exhibit and snapped a selfie with the warrior, worth $4.5 million (£3.2 million).

Rohana then appeared to break off the statue’s left thumb and pocket it before leaving the event with friends. 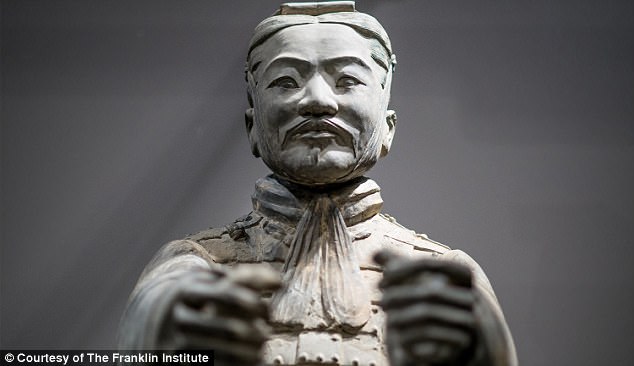 Michael Rohana, 24, has been arrested over the theft during an after hours party at the Franklin Institute in Philadelphia, which is holding an exhibition about the Terracotta Warriors 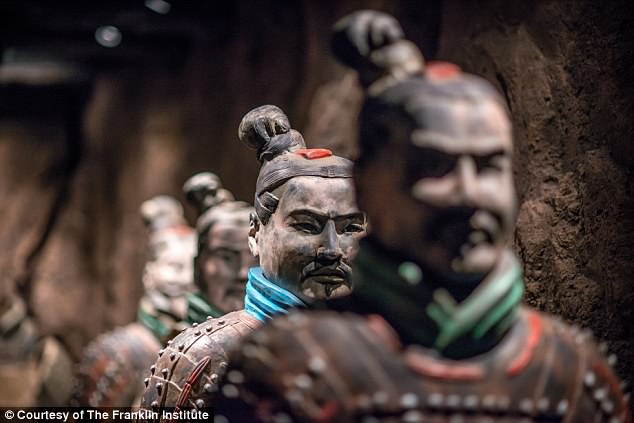 Rohana snuck into the closed exhibit and snapped a selfie with the warrior, worth $4.5 million

The museum noticed its disappearance weeks later on January 8. The FBI agent tracked Rohana back to his home in Bear, Delaware, where the young man admitted to having stashed the thumb in a desk drawer.

He was arrested for theft of a major artwork from a museum, concealment of a major stolen artwork, and the interstate transportation of stolen property, but released on a $15,000 (£10,700) bail, according to court documents seen by AFP.

Built around 209 BC to stand guard over the tomb of the first emperor, the 8,000-strong Terracotta Army is one of China’s most important archaeological discoveries, and considered a symbol of ancient Chinese artistic and military sophistication.

A major tourist attraction in Xi’an, capital of the northern province of Shaanxi, it has been a UNESCO world heritage site since 1987.

The Shaanxi Provincial Cultural Relic Exchange Centre, which looks after the important archaeological findings in China, was shocked by the incident.

The centre’s director told the Beijing Youth Daily on Sunday: ‘We call on the US side to severely punish the person who committed such a damaging act of vandalism and theft of humanity’s cultural heritage.’ 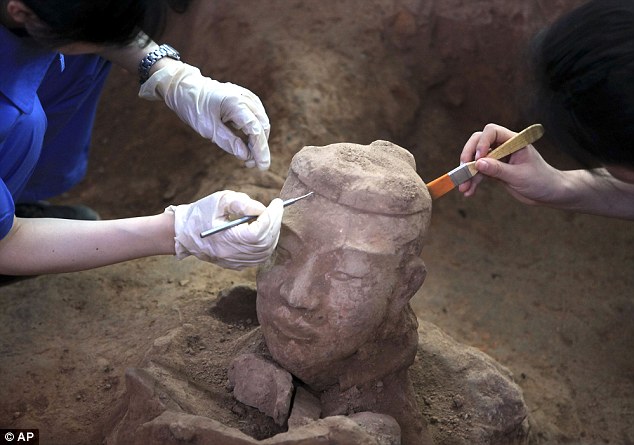 Built around 209 BC to stand guard over the tomb of the first emperor, the 8,000-strong Terracotta Army is one of China’s most important archaeological discoveries 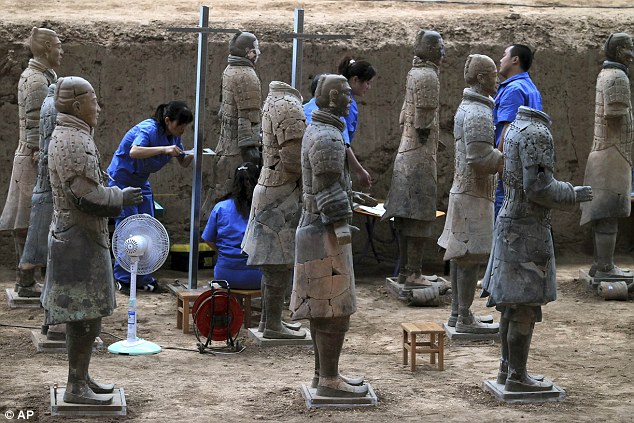 The life-size army was was discovered by chance by a few villagers in 1974 in Shaanxi Province, north-west China, and excavation has been on-going at the site since that date 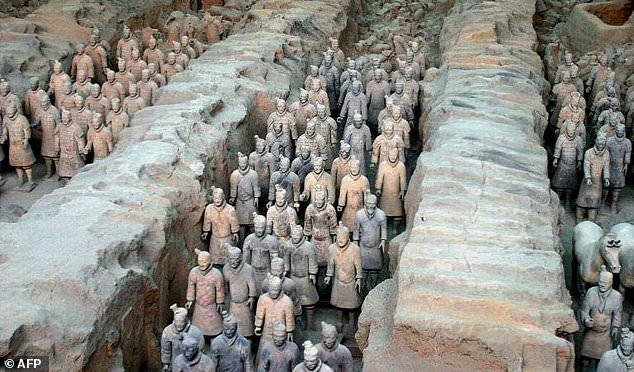 Two experts would be sent to the US to help with repairs, the director said, adding that they had begun the process of claiming compensation for damages.

The director also said the centre felt very guilty because it was the lender of the exhibits and they should have taken care of them better on behalf of the country. The director vowed to draw lessons from the incident.

News of the damage sparked strong criticism on Chinese social media, with many comments nationalistic in tone.

‘Whoever agreed to use our ancestor’s funerary objects to curry favour with foreigners should be the one ‘severely punished’ first,’ wrote one user.

‘If they don’t understand that our statue is precious why would we lend it to the US in the first place?’ another asked.

But a few were more circumspect in their disapproval, recalling China’s destruction of its own heritage.

‘Who will be held responsible for all the cultural relics destroyed in the Cultural Revolution?’ a user wrote, referring to the tumultuous period in the 1960s and 70s when countless artifacts were defaced or destroyed as China tried to rid itself of the influence of traditional culture.

MailOnline has contacted the Franklin Institute for comments and is awaiting a reply.

Terracotta Warriors: The 8,000-strong army built by China’s first emperor to guard him in his tomb 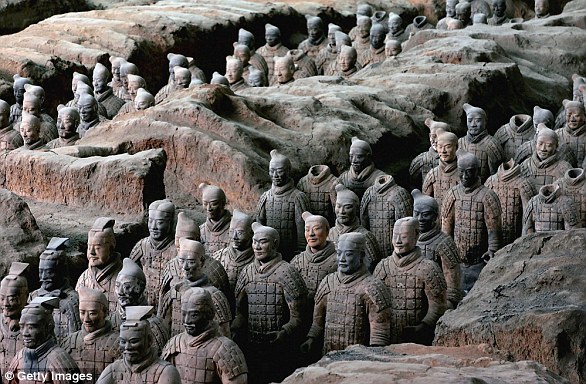 Each of these 2,000-year-old figures was given an individual personality and was coloured

The Terracotta Army is a form of funerary art buried with the first emperor, Qin Shi Huang, in 210 to 209 BC and whose purpose was to protect the emperor in his afterlife.

Arguably the most famous archaeological site in the world, it was discovered by chance by villagers in 1974, and excavation has been on-going at the site since that date.

An extraordinary feat of mass-production, each figure was given an individual personality although they were not intended to be portraits.

The figures vary in height according to their roles, with the tallest being the generals.

Current estimates are that there were over 8,000 soldiers, 130 chariots with 520 horses and 150 cavalry horses, the majority of which are still buried.

Since 1998, figures of terracotta acrobats, bureaucrats, musicians and bronze birds have been discovered on site.

They were designed to entertain the Emperor in his afterlife and they are of crucial importance to our understanding of his attempts to control the world even in death.