By Calum Muirhead City Correspondent For The Daily Mail

Companies on the London Stock Exchange (LSE) with large exposure to China face a potential drubbing as president Xi Jinping’s tightening grip on the country hits its domestic economy and threatens global growth.

Earlier this week, stocks in Chinese companies plunged after a power grab by Xi at the Communist Party’s congress sparked fears of tighter regulations and crackdowns on the business elite.

This was accompanied by a fall in the value of China’s currency, the yuan, which sank to its lowest level against the dollar in nearly 15 years as traders fled amid worries Xi’s policies will continue to dent growth.

The developments also threaten to engulf the London market as the FTSE 100 index contains a number of firms with large exposure to the Chinese economy, which is creaking under the weight of Beijing’s zero-Covid strategy and a crisis in its property sector.

While rising interest rates have been a boon for banks worldwide, a mounting crisis in the Chinese property market is causing alarm. The vulnerability of UK stocks to this was on display this week when HSBC was forced to set aside £947m in its third quarter to cover bad debts accumulated as a result of the instability in Chinese property.

HSBC has also found itself caught in the middle of the growing rift between East and West as China’s growing authoritarianism makes it more difficult for the bank to operate in the country without drawing criticism from politicians and activists.

Earlier this year, the bank sparked fury after it became the first foreign lender to install a Chinese Communist Party (CCP) committee in its investment banking arm in the country.

These usually involve three or more employees who are CCP members and are a way for party representatives to be installed in a company’s top ranks. And HSBC is facing pressure from Ping An, a major Chinese insurer and its largest shareholder, to split off the bank’s Asia business.

Ping An claims that the HSBC’s global reach is becoming unsustainable as political tensions escalate. Such a move, as well as the CCP’s growing influence on the bank’s operations, could have profound implications for the London market given HSBC is one of the LSE’s largest companies with a market cap of £88bn. 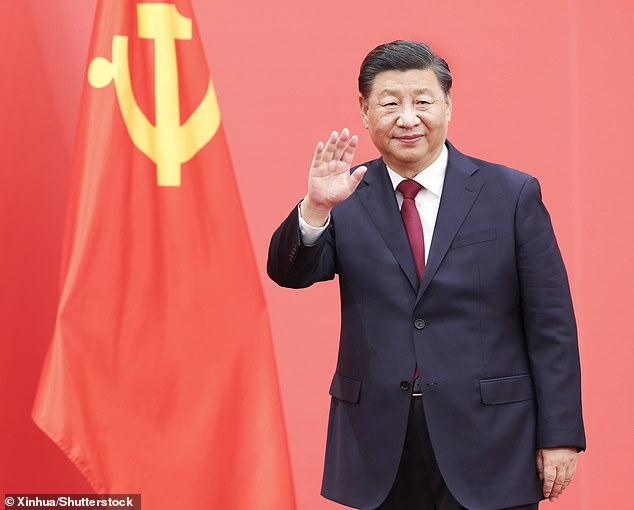 The value of China’s currency, the yuan, sank to its lowest level against the dollar in nearly 15 years as traders fled amid worries Xi’s policies will continue to dent growth

Keith Bowman, investment analyst at Interactive Investor, highlighted that amid the rising tensions, caution regarding investments in China ‘has been rising’ and that Xi’s iron grip on power ‘does little to ease concerns’.

Meanwhile, Interactive’s senior personal finance analyst Myron Jobson said that while there were ‘no easy answers’ concerning investments in China, the region was ‘hard to avoid despite its political risks’.

Other blue-chip firms that could bear the brunt of a Chinese slowdown and increasing government interference in the economy are the major miners, who export large amounts of raw materials to the country.

Antofagasta, Anglo-American, Glencore and Rio Tinto can find their share price performances at the whim of Chinese demand, with any signs its rate of growth could slow sending a chill through the industry.

The recent weakness in China’s currency could also have implications, with analysts at City broker SP Angel predicting the drop in the value of the yuan would ‘weigh on copper prices’ due to a hit to the purchasing power of Chinese buyers.

Meanwhile, Scottish Mortgage Investment Trust, a popular fund with retail investors and savers, is exposed to China through large holdings in food delivery group Meituan and tech giant Tencent, which together account for 6.2 per cent of its portfolio.

Shares in both companies have fallen this week in response to the growing unease around China’s economic outlook. Also in the firing line is luxury fashion brand Burberry, which counts on China’s massive consumer market for a large portion of its sales.

The company’s stock took a hammering over the spring and summer after lockdowns were re-imposed in several major Chinese cities including Shanghai, meaning many shoppers were confined to their homes.

Elsewhere, FTSE 100 health and safety and quality testing group Intertek – which has large operations in Shanghai and makes around 20 per cent of its revenues in China – has been hit by lockdown measures. Shares have fallen 33 per cent so far this year.

Other LSE-listed firms with possible exposure include drinks maker Diageo, which sells high end spirits to the burgeoning middle classes in China, as well as student accommodation group Unite, which earlier this year flagged ‘notable growth’ in demand from Chinese students studying abroad, and sofa seller DFS which sources some of its items from the country.