When North Korea’s leaders need to travel, they’ve got a train that’s unlike any other.

No surprise, then, that the appearance in Beijing on Monday of a deep green train with yellow piping that looked a lot like the one used exclusively by the ruling Kim family has generated so much speculation of a surprise visit by leader Kim Jong Un.

A day after the train was spotted pulling into the station in Beijing and amid reports it had already left Tuesday afternoon, there was still no official word about who was aboard and why.

But if it was Kim Jong Un, it would be his first known trip outside of North Korea since the death of his father, Kim Jong Il, in December 2011.

And, oddly enough, it would be a pretty typical way for him to travel.

Here’s a look at what’s known about the North Korean ruling family’s personal version of the Orient Express.

An armoured North Korean train arrived in Beijing on Monday amid heavy security, sparking rumours that Kim Jong-un could be on board

Just how often Kim Jong Un has used the train to get around inside North Korea isn’t known.

But his father, who famously hated flying and had a penchant for a playboy lifestyle, is said to have decked the train out for lavish parties, bouts of heavy drinking and karaoke on his many journeys by rail.

According to an account published in 2002 by Konstantin Pulikovsky, a Russian official who accompanied Kim Jong ll on a three-week trip to Moscow in 2001, the train was laden with cases of Bordeaux and Beaujolais from Paris. Passengers could feast on live lobster and pork barbecue.

A version of the train open to the North Korean public is more businesslike.

A life-sized mock-up of one of the train’s carriages is on permanent display in the ornate mausoleum on the outskirts of Pyongyang where national founder Kim Il Sung and Kim Jong Il lie in state. According to North Korea’s official account, Kim Jong Il died of a heart attack while on a long-distance train trip.

The display room features a map of the trips the leaders made on the train, with little lights to indicate each stop. One of the many paintings on the wall shows Kim Jong Il standing beside the train on one of those journeys. Kim Il Sung also used the train extensively, taking it all the way to eastern Europe in 1984. 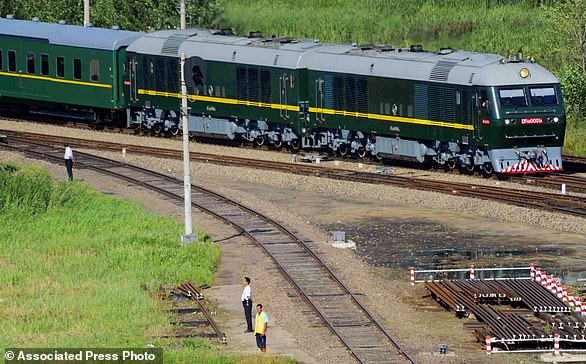 Inside the car is a desk used by the leaders, along with chairs and a sofa.

Guides at the mausoleum explain that the carriage was used as a mobile office – proof, they insist, the leaders worked tirelessly for the people.

SAFETY ON THE RAILS

Kim Jong Il made about a dozen trips abroad, almost all to China and all by train.

The first was in 1983, while he was still Kim Il Sung’s heir apparent. That was the only time the special train is known to have been used by anyone but the leader himself – another reason why many North Korea watchers suspected Kim Jong Un must have been the main passenger this time around.

The heavily armored train’s most important feature might be security.

According to South Korean reports, North Korea has 90 special carriages in total and operates three trains in tandem when a leader is traveling – an advance train to check the rails, the train with the leader and his immediate entourage, and a third train behind for everyone else.

Advanced communications and flat screen TVs have been installed so the North Korean leader can give orders and receive news and briefings. 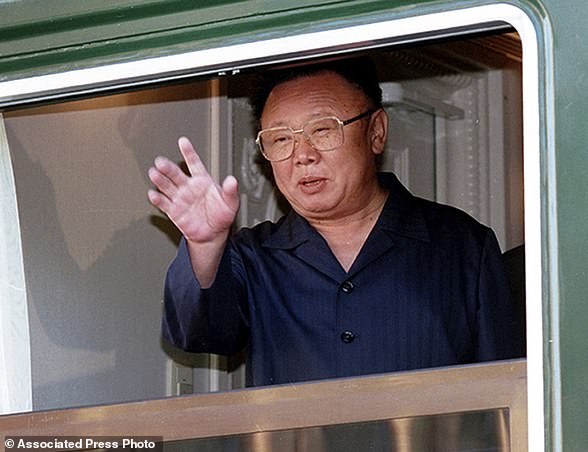 FILE – In this Aug. 20, 2002, file photo, then North Korean leader Kim Jong Il waves out of a window of his armored train at the Russian border railway station of Khasan, Russia. (AP Photo/Igor Kochetkov, File)

For Kim Jong Un’s predecessors, trips were often secret until after they were over.

Experts still couch their estimates of how many times North Korean leaders have traveled abroad because some trips may still remain secret. The Chinese and North Korean media aren’t much help. They are state run and follow the directives of their respective ruling parties.

Kim Jong Il’s trip to China in 2003, for example, wasn’t announced until days later. When he took the train across Russia to visit President Dmitry Medvedev in 2009, local photographers were reportedly banned from documenting the journey through their country. Whole towns in Siberia were instructed to stay indoors and keep off the streets until the train safely passed.

But this time was a bit different.

News of the train’s arrival in Beijing on Monday broke thanks in large part to videos posted on the internet by regular people using their cellphones. Japanese media outlets quickly picked up the videos mixed with shots of heavy security and a long motorcade arriving at a state guesthouse.

That unleashed media stakeouts all over town.

In the age of social media and ubiquitous camera phones, it seems discretion is getting harder everywhere.