China could ‘decimate’ the Australian economy as punishment

Australia’s economy would be ‘decimated’ if trade with China decreased as relations hit new lows over the coronavirus crisis, experts have warned.

The federal government’s calls for a ban on wet markets and an inquiry into the virus origins – as well as repeated suggestions that China covered up the spread – have infuriated Beijing.

Last week the the Chinese Embassy called Home Affairs Minister Peter Dutton ‘pitiful,’ ‘ignorant’ and a US ‘parrot’ after he told China to ‘answer questions’ about how coronavirus started.

And on Sunday Chinese Ambassador to Australia Jingye Cheng warned that Chinese consumers may stop buying Australian products in revenge.

China provides 16 per cent of our tourists and 38 per cent of our international students who contribute tens of billions to the economy. Pictured: Tourists at the Sydney Opera House 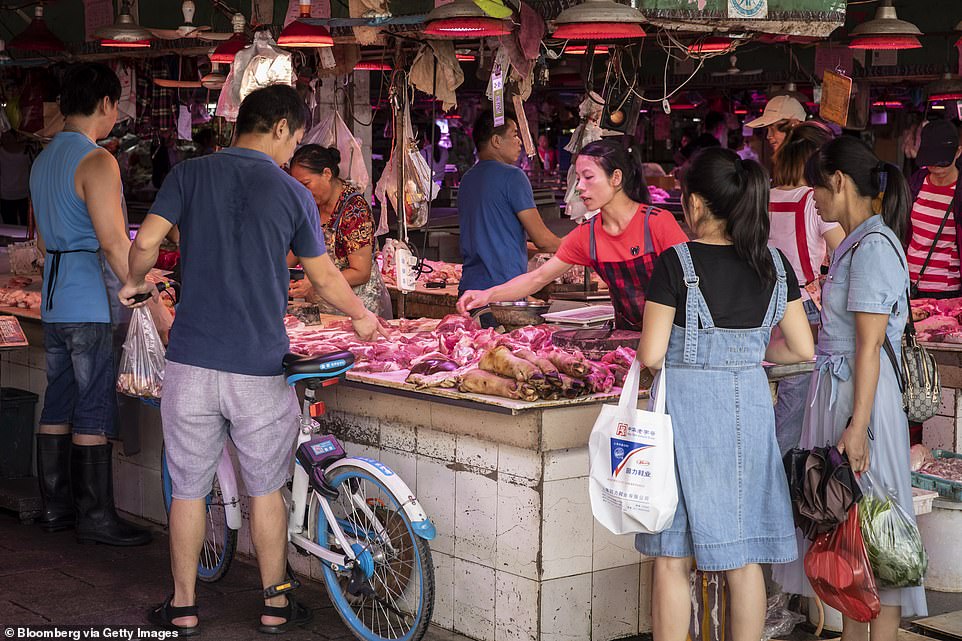 The federal government’s calls for a ban on wet markets and an inquiry into the virus origins – as well as repeated suggestions that China covered up the spread – have infuriated Beijing. Pictured: A wet market in Nanming, China

Dr Raby slammed the Morrison government’s brazen approach and said public calls for coronavirus inquiry and a ban on wet markets would only ‘harden attitudes on both sides.’

Now there are grave fears the diplomatic deterioration could have serious consequences for everyday Australians.

As our biggest trading partner by far, China buys a third of our exports, including iron ore, coal and beef, supporting hundreds of thousands of jobs.

Jane Goolley, Professor at the ANU College of Asia and the Pacific, said the government should not ‘bite the hand that feeds us’.

‘It’s shocking that relations with China are going from bad to worse and no-one seems to mind,’ she said.

Professor Goolley said Mr Morrison has no hope of forcing China to ban wet markets, which are a crucial source of food and income for millions. 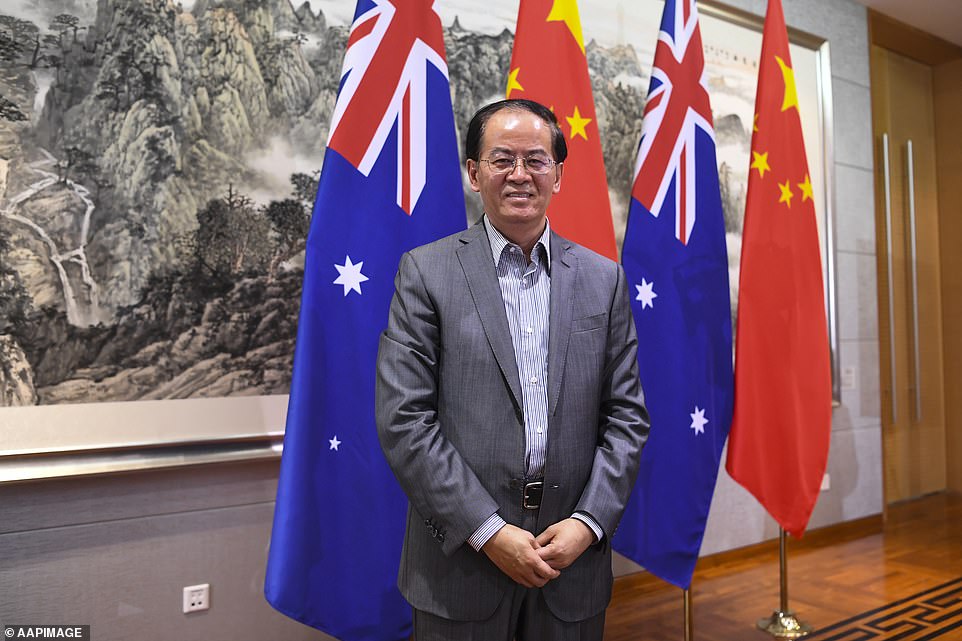 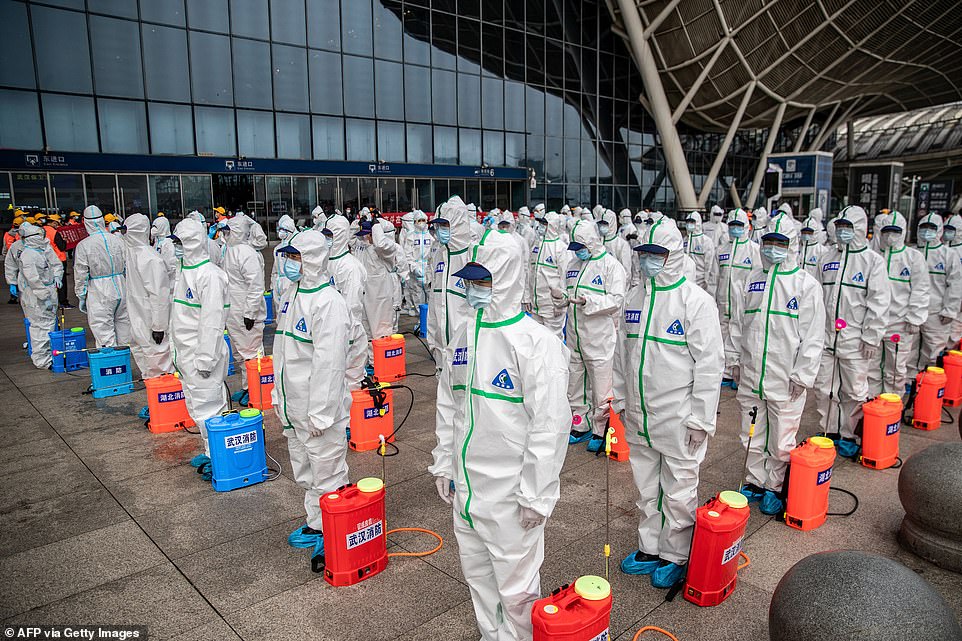 ‘There is zero chance that what we say has any impact,’ she said.

‘We will only infuriate Chinese government because they so strongly object to foreign interference.

‘At best the government’s approach will make no difference and at worst the Chinese government will decide to contract the relationship with Australia.’

China could punish Australia with official economic sanctions or, more likely, through an unofficial campaign telling Chinese people to boycott Australian goods and services, she said.

Beijing’s recent track record of economic coercion includes encouraging a boycott of South Korean cars after the country deployed a US missile shield in 2017 and a ban on Norwegian salmon after Chinese rebel Liu Xiaobo won the Nobel Peace Prize in Oslo that same year.

Professor Goolley warned this type of manoeuvering could resume if the federal government continues to upset the Chinese government.

‘Beijing could find ways to choke off parts of trading and relationship,’ she told Daily Mail Australia.

‘For example, it could increase propaganda persuading students and tourists not to come here.

‘Some say Beijing could turn off the tap and choke the Australian University Sector.

‘It doesn’t want to do this because it wants its citizens to benefit from Australian education – but if it did that would cost thousands of jobs in our universities and leave the sector decimated.

‘Even if the Chinese government does nothing, we could lose the market if Chinese people perceive our government as being anti-China,’ she warned.

Ambassador Cheng raised the prospect of a consumer backlash on Sunday, telling the AFR: ‘The tourists may have second thoughts. 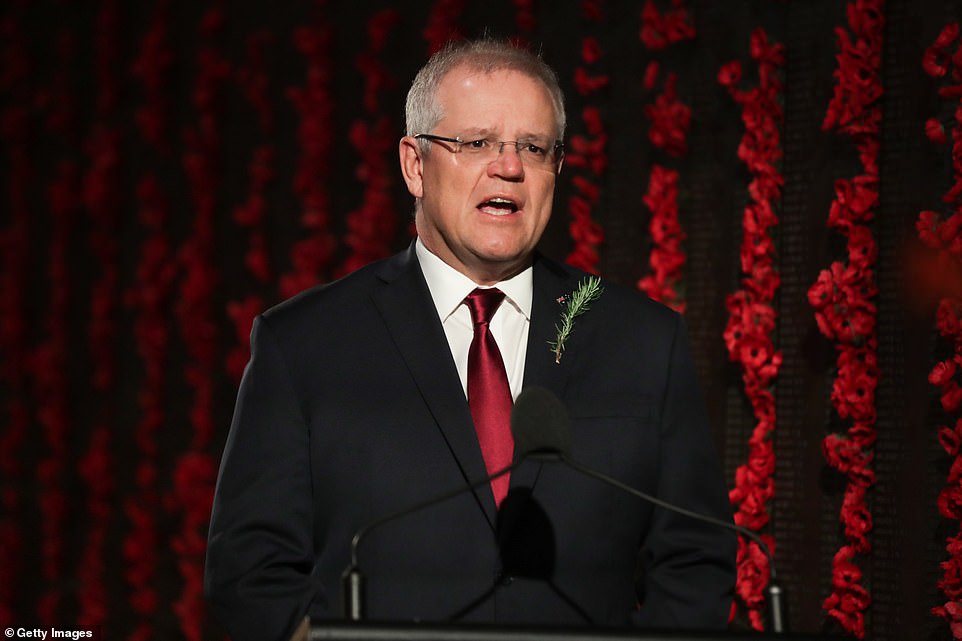 ‘The parents of the students would think whether this is the best place to send their kids.

‘It is up to the people to decide. Maybe the ordinary people will say “why should we drink Australian wine? Eat Australian beef?”

Former Liberal Party leader John Hewson also warned the federal government’s hard line on China could be risky given that Australia is ‘clearly the most dependent economy on China’.

Mr Morrison has called the re-opening of the wet market where the virus spawned ‘unfathomable’ and has demanded changes in the ‘upper echelons’ of the World Health Organisation after US President Trump cut funding because it praised China’s handling of the outbreak.

‘These sort of piecemeal statements and initiatives can be counterproductive, especially if they are easily identified as ‘sucking up to the US’, or ‘doing the US’s bidding’, and so risk unwanted Chinese responses that could be detrimental to our interests more broadly,’ Dr Hewson told Daily Mail Australia.

He said the answer was not to ‘suck up to China’ but rather focus on developing a ‘clear, definitive, China Policy consistent with a hard-headed assessment of our national interest.’

‘I believe that we will earn their respect over time by clearly and consistently acting and advocating in terms of our national interests, principle and values,’ he said.

Dr Raby voiced similar concerns on the public approach the Morrison government has taken to calling out China when other key allies such as Britain and France have stayed quiet. 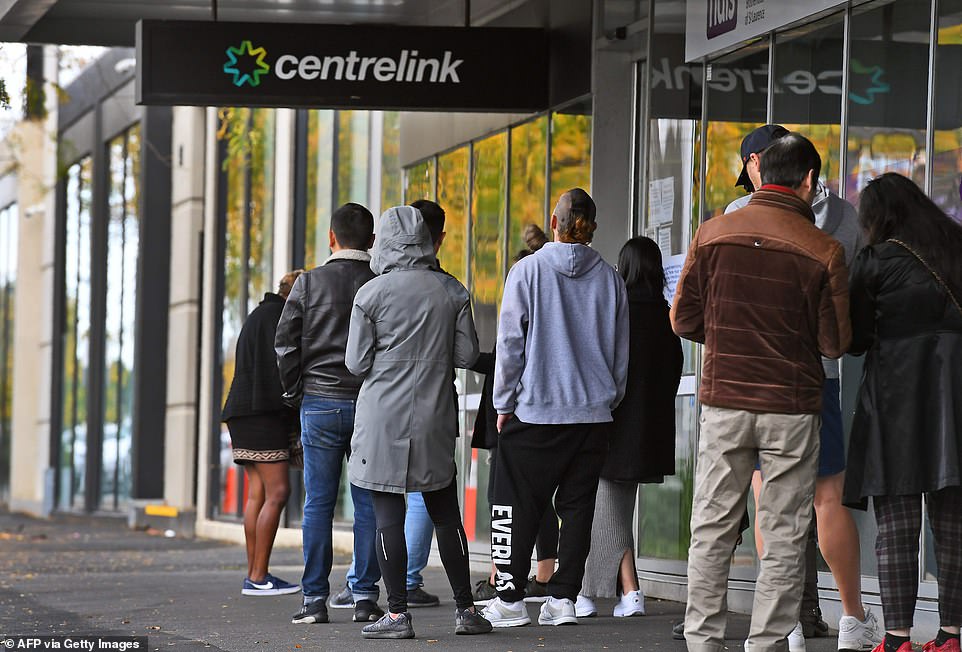 Dr Raby said Canberra should ‘use the crisis the repair relations with Beijing’ because Australia will need China to help the economy recover after crippling lockdowns pushed almost a million Aussies out of work. Pictured: Centrelink queues

He said desires for a coronavirus inquiry were ‘perfectly reasonable’ but ‘this can only be done on the basis of international cooperation’ because China will vigorously defend its sovereignty.

‘The approach by The Australian Government is hardly the way to build such a consensus. Australia should be quietly discussing such things with like-minded countries, not publicly leading the pack.’

Dr Raby said Canberra should ‘use the crisis the repair relations with Beijing’ because Australia will need China to help the economy recover after crippling lockdowns pushed almost a million Aussies out of work.

‘We should be talking about how to ensure something like this doesn’t happen again and how we can collectively repair our economies,’ he said.

‘Australia will definitely need China to be part of the solution for the economic damage it is experiencing.’

Showing how important China is to Australia, a report by Deloitte in 2017 found that half a million Aussies would lose their jobs if China’s growth rate fell from 6.5 per cent to less than 3 per cent.

Analysts have long warned against the dependency on one country and have touted India and Indonesia as huge markets – but it will take years for demand in those countries to match China’s.

Professor Goolley said: ‘We need China now more than ever.’

The Chinese-Australian spat over coronavirus

Prime Minister Scott Morrison has repeatedly called for a coronavirus investigation and has demanded changes in the ‘upper echelons’ of the World Health Organisation after it praised China’s handling of the outbreak.

He was also the fist world leader to call for a ban on China’s wet markets where the virus jumped from animals to humans in November, calling their re-opening ‘unfathomable’.

The Chinese Foreign Ministry said it was ‘seriously concerned and firmly opposed’ to an inquiry and slammed foreign minister Marise Payne after she suggested China withheld information regarding the spread of the virus.

Home Affairs Minister Peter Dutton also faced the wrath of Beijing when he said China needs to ‘answer questions’ on the virus origins after unsubstantiated reports from the US that it was grown in a lab in Wuhan and accidentally escaped.

The Chinese Embassy hit back, calling Mr Dutton ‘pitiful,’ ‘ignorant’ and a parrot of America.

On Sunday 26 April, Mr Dutton again demanded more ‘transparency’ from China ‘in the way they have dealt with this virus’.

China’s Foreign Ministry spokesman Geng Shuang hit back, saying: ‘At such a critical juncture, it is highly irresponsible to resort to politically motivated suspicion and accusation.

‘We advise the Australian side to put aside ideological bias and political games, focus on the welfare of the Australian people and global public health security, follow the international community’s collective will for cooperation, and contribute to the global cooperation in fighting the virus, instead of doing things to the contrary.’

That night, the Chinese Ambassador to Australia warned of a consumer backlash.

He told the AFR: ‘The tourists may have second thoughts. The parents of the students would think whether this is the best place to send their kids.

‘It is up to the people to decide. Maybe the ordinary people will say “why should we drink Australian wine? Eat Australian beef?”