‘Quest for Heavenly Truth’: China’s first Mars exploration mission will be called ‘Tianwen-1’ after a 2,000-year-old poem that ponders on stars and planets

A poem pondering on the stars and planets written 2000 years ago was the inspiration for the name of China’s first exploration mission to Mars.

Tianwen-1 is a robotic exploration mission to the Red Planet and is due to launch in the summer of this year – around the same time as the NASA Perseverance rover.

Called, Tianwen, the poem was written by Qu Yuan and means ‘Quest for Heavenly Truth’ – it raises questions about the stars and other heavenly bodies.

The probe will search for water and signs of life on the red planet through an orbiter, a lander and a rover that will carry 13 scientific instruments across the Martian soil.

This is an example of what the Tianwen rover will look like when it lands on Mars next year. It will carry 13 scientific instruments and will be looking for Martian water

According to the administration, the country’s first Martian probe will also look at the environment, atmosphere and geological structure of the Red Planet.

The rover will have six wheels and four solar panels. It will weigh more than 440 lbs will work about three months on the planet, said Sun Zezhou, the probe’s chief designer at the China Academy of Space Technology.

It will include a ground penetrating rover that can look 330ft below the surface, a magnetic field detector and weather forecasting equipment.

Ye Peijian, a leading scientist in deep-space exploration at the academy, said the probe will land on the Martian surface before July 2021.

It will leave Earth on top of the Long March 5 Y4 carrier rocket and is expected to leave the planet in July 2020.

The announcement of the name coincided with China’s annual Space Day and the 50th anniversary of the launch of its first satellite.

China successfully launched its first satellite, the Dongfanghong-1, in 1970.

China’s space agency, CNSA, says the name – Tainwen-1 – represents the country’s ‘relentless pursuit of truth’ and the unending explorations in science and technology.

The poem that gave the mission its name was written during the Warring States Period from last 475-221 BC and was written by Qu Yuan who was ‘known for his patriotism and contributions to classical poetry,’ the agency said in a statement. 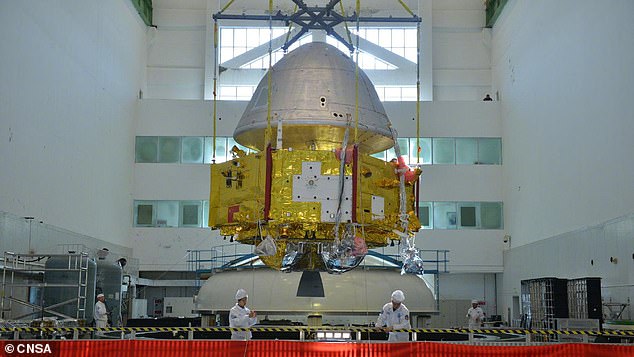 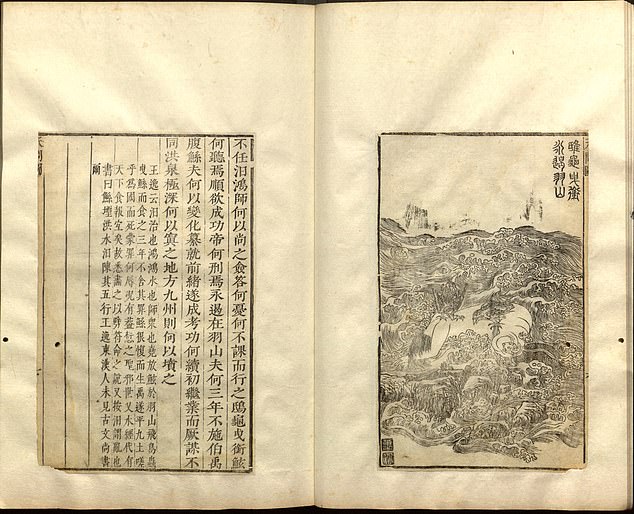 The CNSA said all of China’s planetary exploration missions in future would be named ‘Tianwen’ to signify the country’s scientific pursuits in space.

In 2003, it became the third country to put a man in space with its own rocket after the former Soviet Union and the United States.

Since then, China has been racing to catch up with Russia and the United States and become a major space power by 2030.

Tianwen-1 will be one of two rovers landing on the Red Planet next year – joining the NASA Perseverance vehicle – and both will be looking for signs of life.

The European and Russian space agencies were due to send the Rosalind Franklin rover to Mars this year but that had to be delayed due to issues with testing.

Chang’e-6 will be the first mission to explore the south pole of the moon and is expected to launch in 2023 or 2024.

Chang’e-7 will study the land surface, composition, space environment in a comprehensive mission, it was claimed, while Chang’e-8 will focus on technical surface analysis.

The CNSA is also building an Earth orbiting space station where Chinese astronauts will conduct scientific experiments, similar to the crew of the ISS.

The agency are also launching a mission to Mars in 2020 which will see them land a rover on the surface of the Red Planet.