China’s parliament has approved the decision to go forward with a law tackling secession, subversion, terrorism and foreign interference in Hong Kong.

The Chinese National People’s Congress passed the bill at its closing ceremony in Beijing this afternoon local time. The law is expected to be enacted before September.

Meanwhile, riot police were deployed across Hong Kong today after mass protests yesterday as lawmakers debated a bill that would criminalise disrespect of China’s national anthem and Washington piled on pressure to preserve the city’s freedoms.

US Secretary of State Mike Pompeo said Hong Kong no longer qualified for special treatment under US law, potentially dealing a crushing blow to its status as a major financial hub.

The Chinese National People’s Congress passed the national security law for Hong Kong unanimously at its closing ceremony in Beijing on Thursday. Pictured, Chinese President Xi Jinping (left) and Premier Li Keqiang (right) applaud during the closing session of the Chinese People’s Political Consultative Conference (CPPCC) in Beijing on 27 May 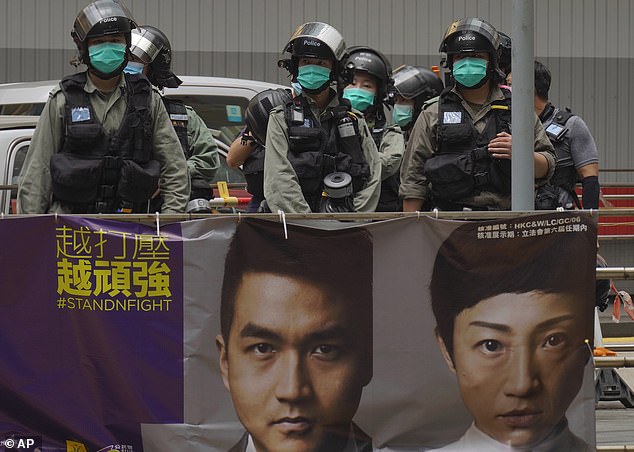 Meanwhile, riot police were deployed across Hong Kong today after mass protests yesterday as lawmakers debated a bill that would criminalise disrespect of China’s national anthem

The security law was ‘only the latest in a series of actions undermining Hong Kong freedoms, he told Congress.

‘No reasonable person can assert today that Hong Kong maintains a high degree of autonomy from China, given facts on the ground,’ he said.

The new security law could see Chinese intelligence agencies set up bases in the city that was given a high degree of autonomy under the ‘one country, two systems’ terms of its 1997 handover to China by former colonial power Britain.

Chinese authorities and the Beijing-backed government in Hong Kong say there is no threat to the city’s high degree of autonomy and the new security law would be tightly focused.

The United States and China clashed over Hong Kong at the United Nations on Wednesday after Beijing opposed a request by Washington for the Security Council to meet over the national security legislation.

The US mission said it was ‘a matter of urgent global concern that implicates international peace and security’. China said the legislation was an internal matter.