Chinese police have claimed that a worker at Britain’s Hong Kong consulate was detained in Shenzhen for ‘hiring prostitutes’.

The news was revealed by Luohu police in Shenzhen to China’s state newspaper Global Times today.

Simon Cheng Man-kit, 28, who works at the British Consulate-General in Hong Kong, went missing after a business trip to the mainland on August 8.

The Chinese foreign ministry confirmed on Wednesday that Mr Cheng had been detained for ‘violating the law’. The consulate worker was given 15 days of administrative detention, according to the Ministry.

Mr Cheng’s family said they ‘feel very helpless’ and ‘are worried sick’. They said their lawyer had not been able to gain information about his whereabouts from the Chinese authority.

He also stressed that the worker was a Hong Kong citizen. He said the issue, therefore, was not a diplomatic problem, but China’s ‘internal affairs’.

Global Times said Luohu police told them in an exclusive interview that Mr Cheng had been detained for breaking Article 66 in the law.

The police did not explain if Mr Cheng had allegedly hired one or multiple prostitutes.

Luohu police also claimed in the interview that they did not inform Mr Cheng’s family in Hong Kong because Mr Cheng had requested them not to do so.

Britain said on Tuesday it was ‘extremely concerned’ by reports that a staff member at the consulate in its former colony of Hong Kong had been detained in mainland China.

According to Hong Kong news website HK01, Mr Cheng had told his girlfriend to ‘pray for me’ as he said he was on his way back. 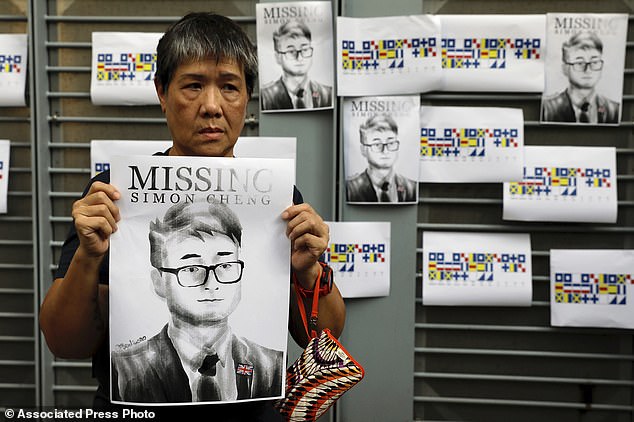 A supporter holds a poster outside of the British Consulate in Hong Kong during a rally in support of Mr Cheng, who has been detained by the Chinese government in Shenzhen

About two dozen people gathered Wednesday outside the British consulate in Hong Kong to demand the U.K. government step up efforts to secure the release of Mr Cheng.

‘Save Simon now!’ the crowd chanted in front of a wall of missing person posters with pictures of the worker.

Max Chung, the event’s organizer and an acquaintance of Mr Cheng’s, said Mr Cheng had travelled to the neighboring mainland city of Shenzhen on a mainland travel permit for Hong Kong and Macao residents. He holds a British National Overseas passport, according to Chung. The travel document is issued by the U.K. to Hong Kong permanent residents.

The case has stoked fears among Hong Kong residents that Beijing is extending its judicial reach to Hong Kong, a semi-autonomous Chinese territory and former British colony.

Mr Cheng’s girlfriend, who is said to be from Taiwan, told Hong Kong media that Mr Cheng was likely to have been detained on the territory of Hong Kong after he had got to the West Kowloon railway station.

A spokesman from Britain’s Foreign and Commonwealth Office has previously said: ‘We are concerned by reports that a member of our team has been detained while returning to Hong Kong from Shenzhen.’

‘We are providing support to their family and seeking further information from authorities in Guangdong province and Hong Kong.’

Joshua Rosenzweig, Amnesty International’s Head of East Asia, said Mr Cheng’s case was ‘grossly unjust’ and it was the latest example of China using administrative detention as a form of political punishment.

‘If the Chinese authorities have sufficient, credible and admissible evidence that an internationally-recognised offence has been committed, they should charge him in a fair criminal process – which administrative detention blatantly is not,’ Mr Rosenzweig stated.

Mr Cheng is a trade and investment officer in the consulate’s Scottish Development International Section.

After contacting his girlfriend, Mr Cheng failed to answer two further calls from her.

He had apparently planned to return to Hong Kong via a high-speed railway line from Shenzen.

When he did not return to work, the British consulate spoke to his family and police were contacted.

However, officers at the relevant railway station said there were no arrests on August 8 or 9, according to Hong Kong media. 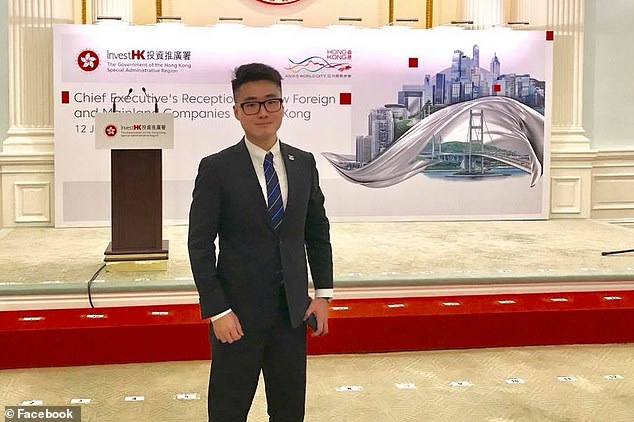 Simon Cheng Man-kit (pictured), who works at the British Consulate-General in Hong Kong, is feared to have been detained after failing to return a business trip to the mainland 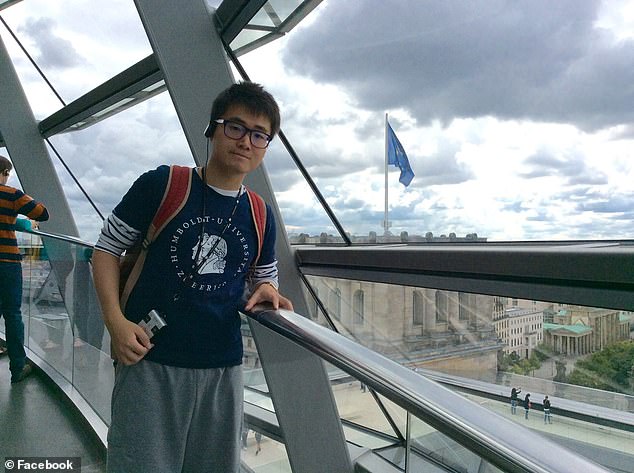 Mr Cheng (who is pictured in Germany) had been at a business event in Shenzhen, south-eastern China, on August 8 but failed to return to work

According to Mr Cheng’s online profiles, he has worked at the British consulate in Hong Kong since December 2017.

Before that, he worked for the European Chamber of Commerce in Taiwan and also studied at the London School of Economics.

He also describes himself as a former member of the Young Fabians, a branch of Britain’s centre-left Fabian Society.

Mr Cheng’s disappearance comes at a tense time in relations between China and the West, as Beijing battles Washington in a trade war and China faces growing criticism over its crackdown on protesters in Hong Kong.

Weeks of protests in the Chinese territory show no sign of relenting with campaigners calling for the resignation of the city leader, democratic elections and an independent investigation into police use of force. 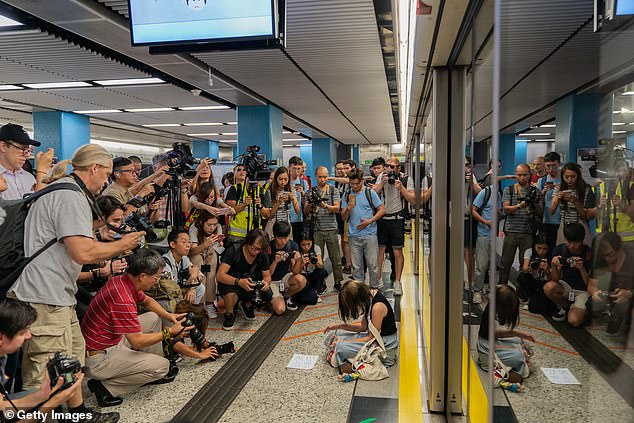 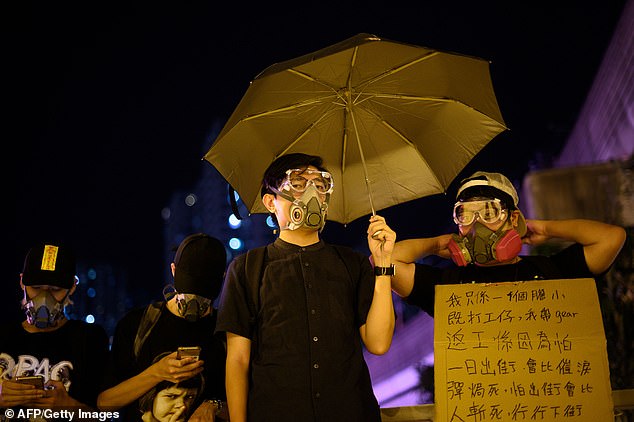 The demonstrations were triggered by a controversial extradition law but have broadened into a call for wider democratic reforms.

Beijing has taken an increasingly hard line tone against the protests, which it sees as a direct challenge to its rule.

It has also repeatedly warned Britain – the former colonial ruler of Hong Kong – against ‘interference’ in the protests.

Britain, the United States and other countries have urged China to respect the ‘one country, two systems’ formula under which Hong Kong returned to China in 1997. 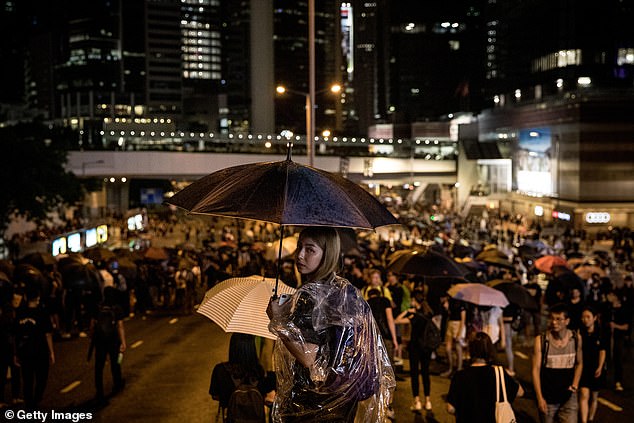 Hong Kong enjoys liberties unseen on the mainland, including freedom of speech, unfettered access to the internet and an independent judiciary.

But the ongoing protests have raised fears of a Chinese crackdown.

Chinese authorities have increased their inspections at the border, including checking phones and devices of some passengers for photos of the protests.

China had promised to respect the freedoms in the semi-autonomous territory after its handover from Britain in 1997.