Beijing officials logged 526 infections over the last 24 hours, including 312 that were asymptomatic — did not display any symptoms.

Outbreaks are emerging in dozens of cities including the financial centre Shanghai, the northern port city of Qingdao and the southern city of Dongguan among others.

No data on Covid deaths and hospitalisations was published.

China is the last major country sticking to the brutal ‘zero Covid’ strategy, which sees lockdowns and mass testing imposed when the virus is detected.

It is struggling to keep a lid on the more transmissible Omicron variant, after a study suggested the nation’s home-made vaccine offers virtually no protection against the strain.

Suzhou, a city of 6.7million next to Shanghai, is currently under lockdown, alongside Baise, a city of 3.6million near the border with Vietnam.

Beijing has repeatedly been accused of fudging its Covid data during the pandemic to make outbreaks appear less severe.

In neighbouring Hong Kong, escalating Covid cases are now seeing hospitals and quarantine centres being overwhelmed. Its deaths from the virus are also spiralling, with 233 recorded yesterday compared to 82 just a week ago.

China’s daily Covid tally over the last year is shown above. Daily cases have now spiked to their highest level since the initial Wuhan outbreak 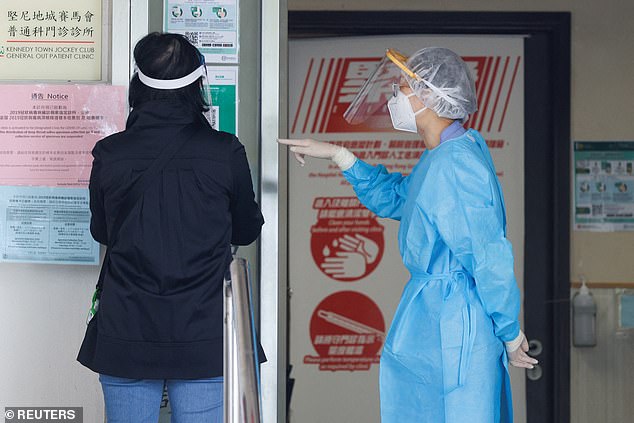 Outbreaks are centred across several cities including Shanghai and Qingdao. There are also major outbreaks in Hong Kong, pictured above a healthcare worker in the are today 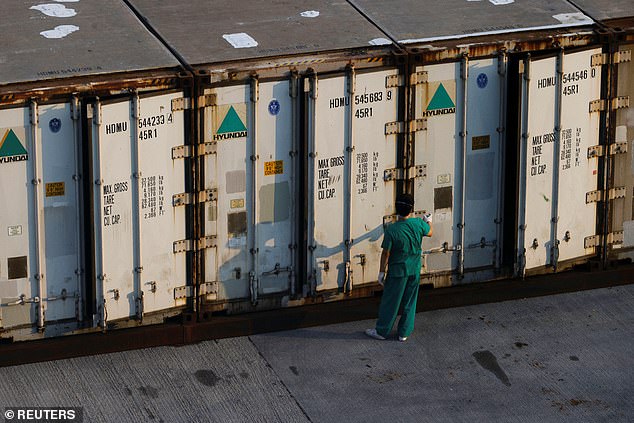 Lower vaccination rates and questions over how well Chinese vaccines work are thought to be behind the higher levels. Pictured above are refrigeration containers in Hong Kong amid the outbreak from March 5

China recorded more than 15,000 cases in a single day when the SARS-CoV-2 virus at the height of its original outbreak back in February 2020.

But the nation of 1.4billion people has since insisted its cases remain in the hundreds or below, even as other countries were facing spiralling waves of infections.

The flare-ups in several major cities suggest current measures are failing to put the lid on Omicron.

A top Chinese scientist said last week that the country should aim to co-exist with the virus and could move away from the zero-tolerance strategy ‘in the near future’.

However, National People’s Congress spokesman Zhang Yesui poured cold water on that idea last week, ahead of China’s annual parliamentary meetings where policies are set for the coming year.

‘The path is correct and results are good,’ Zhang said.

‘Any prevention and control measures will have some costs, but compared to protecting people’s lives and health, these costs are worth it.’

Yale University scientists in the US have warned that China’s vaccine — CoronaVac — may not protect against Omicron. 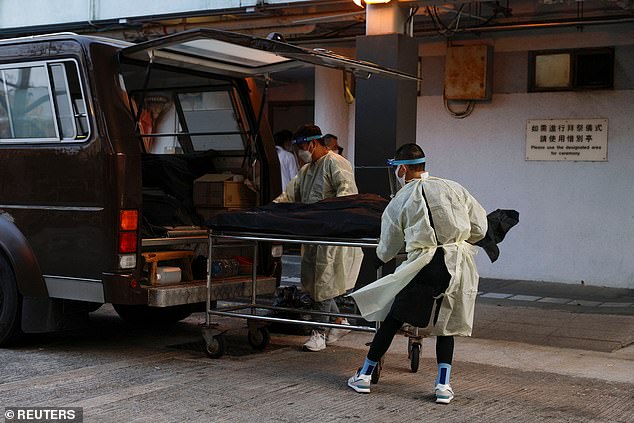 A corpse is pictured being moved to a mortuary in Hong Kong, China, on March 5

China says more than 85 per cent of its population — or 1.23billion people — have got two doses of the vaccine.

But this is due to the city’s stringent Covid rules, saying anyone who tests positive must be admitted to hospital or an isolation facility regardless of how ill they are.

This has seen even asymptomatic people and those with mild conditions sent to hospitals or quarantine centres.

With anger growing at the Government, officials are now looking at adjusting the strategy as the system is overwhelmed.