China releases stunning images of the far side of the moon

China’s space agency has released a huge batch of stunning images from the far side of the moon, revealing the beauty of the mysterious terrain.

The high-resolution images were released on the agency’s dedicated website and were enhanced by a NASA expert.

Doug Ellison, who heads up the engineering camera team for the Curiosity Mars Rover at NASA, processed the images and posted them on Twitter.

One image of the Chang’e-4 lunar lander with the immaculate tracks of the Yutu-2 rover was brought to life in colour using sophisticated computer software. 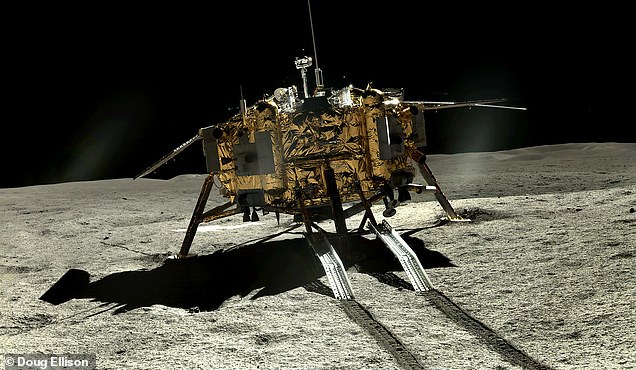 Doug Ellison, who heads up the engineering camera team for the Curiosity Mars Rover at NASA, processed the images and posted them on Twitter. He debayered the images to reveal their true colour 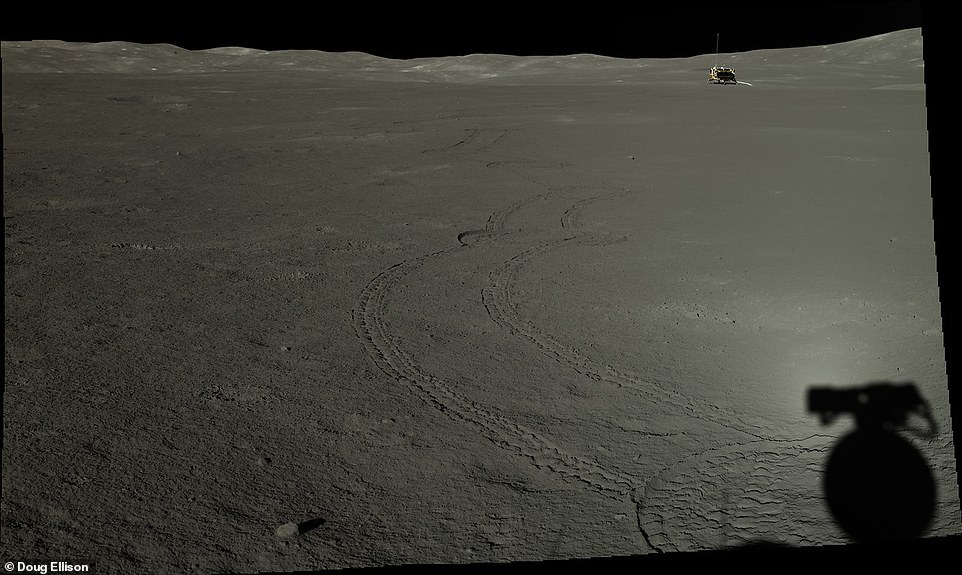 Pictured: Tracks of the lunar rover Yutu-2, which translates directly as Jade rabbit, are shown etched into the powdery surface of the moon

The images were taken by Chang’e-4 lander’s terrain camera and the panoramic camera on the Yutu-2 rover.

The data dump measured more than 10GB and includes images taken over the course of its first year in operation.

Mr Ellison tweeted ‘Oh – this is so pretty’ after successfully debayering the photos.

Debayering is a technique that uses computer software to reveal the true colour of a photo.

The images were sent back in what appears to be black and white but it is actually an incomplete colour image. Computer programmes can be set up to extract the true colouration (pictured) 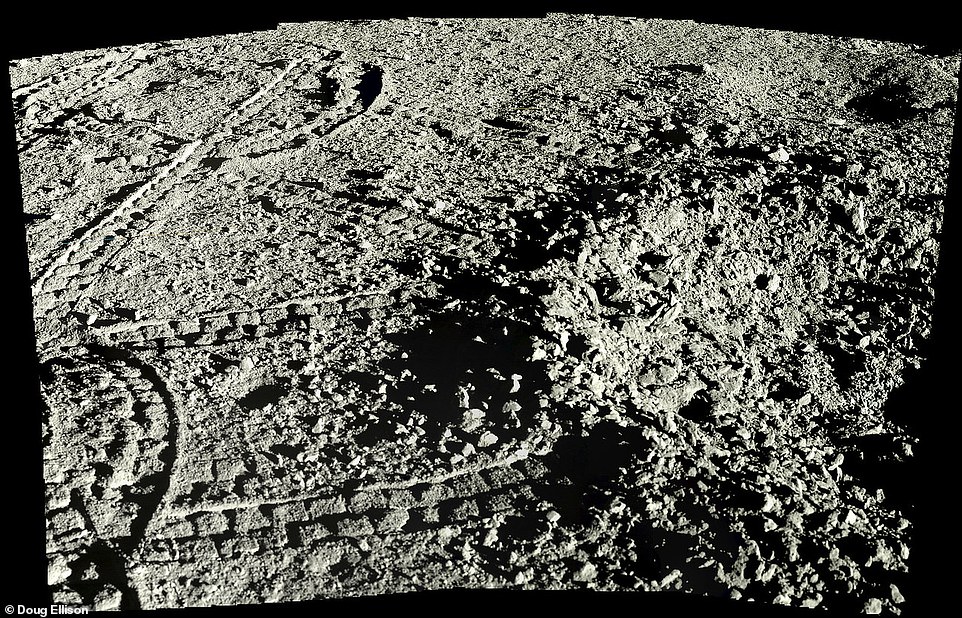 WHY IS THE FAR SIDE OF THE MOON KNOWN AS THE ‘DARK SIDE’?

The far side of the moon – colloquially known as the dark side – actually gets as much light as the near side but always faces away from Earth.

Less than a fifth of the opposite half of the moon is ever visible and it wasn’t until 1959 until we received images of what it looked like when the Soviet Luna 3 spacecraft returned snapped the mysterious region.

In 1968, astronauts aboard the Apollo 8 spacecraft were the first humans to set eyes on the far side in person as they orbited the moon.

Since then, several missions by NASA and other space agencies have imaged the lunar far side.

That includes NASA’s Deep Impact spacecraft, which imaged the far side from a distance of 31 million miles (49m km) in 2008.

This relatively unexplored region is mountainous and rugged, making a successful landing much harder to achieve.

Professor of astrophysics at the University of Nottingham, Christopher Conselice, said the far side is much more rugged and has less volcanic activity than the side we see from Earth.

The images were sent back in what appears to be black and white, but they are actually incomplete colour images.

Computer programmes can be used to extract the true colouration.

Some of the images feature views of the Von Karmer crater in which the mission landed.

The far side of the moon – colloquially known as the dark side – actually gets as much light as the near side but always faces away from Earth.

This is because the moon is tidally locked to Earth, rotating at the same rate that it orbits our planet, so the far side – or the ‘dark side’ – is never visible from our planet.

Days on the moon last for 14 Earth days thanks to its orbit around Earth and it can only operate during the lunar day when it is warmer.

Chang’e-4 and Yutu-2 are entering their 14th lunar day in operation.

It is the second Chinese probe to land on the moon, following the Yutu rover mission in 2013.

The remarkable images are a secondary perk to the vital data that it is beaming back to Earth via its own dedicated relay satellite named Queqiao.

It is permanently stationed in operational orbit about 40,000 miles beyond the moon and is used to bounce images from the far side of the moon back to Earth.

The tasks of the Chang’e-4 include astronomical observation, surveying the moon’s terrain, landform and mineral composition, and measuring the neutron radiation and neutral atoms to study the environment on the far side of the moon. 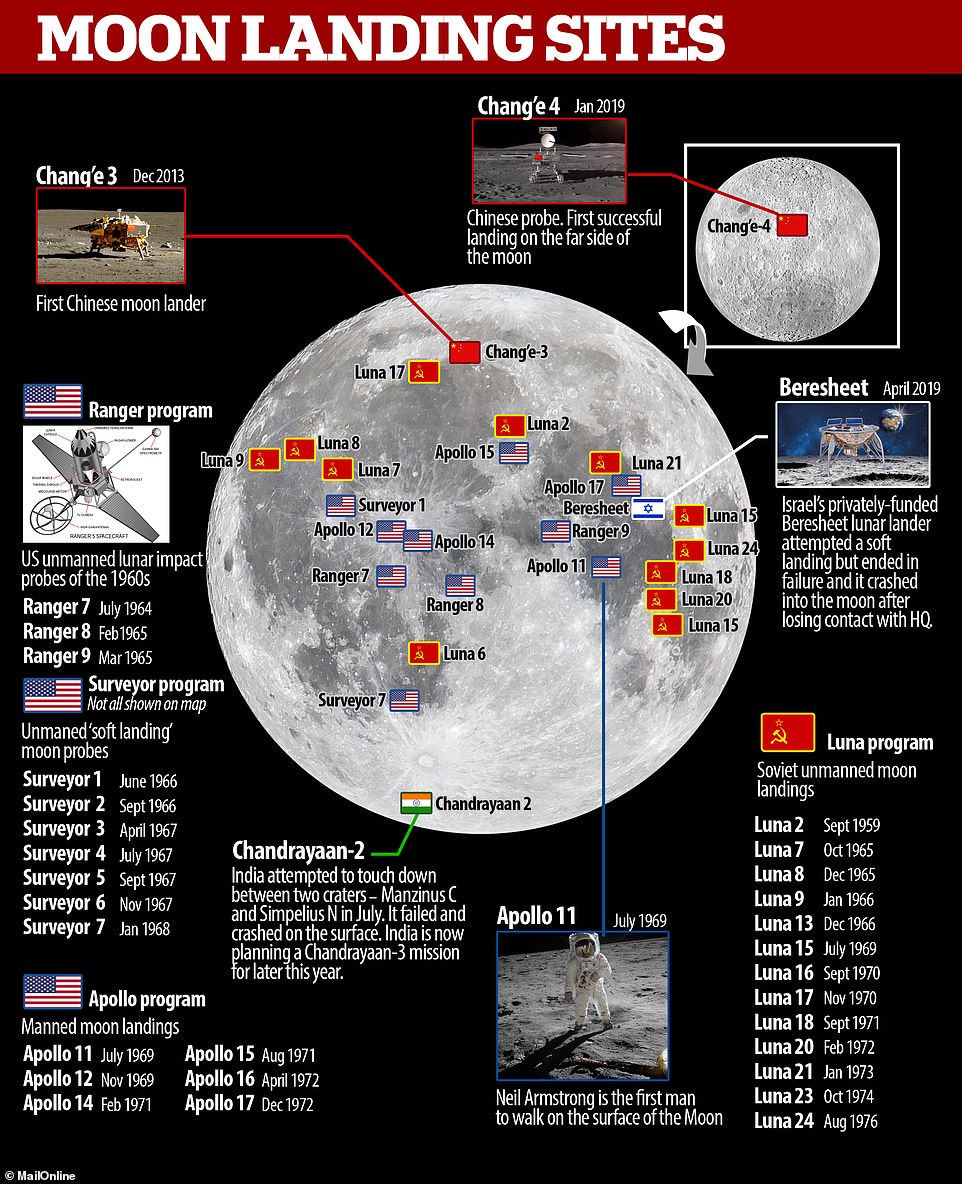 China’s Chang’-4 mission was the first from any nation to land on the far side of the moon. It followed the success of Chang’e-3 and is laying the foundations for future missions 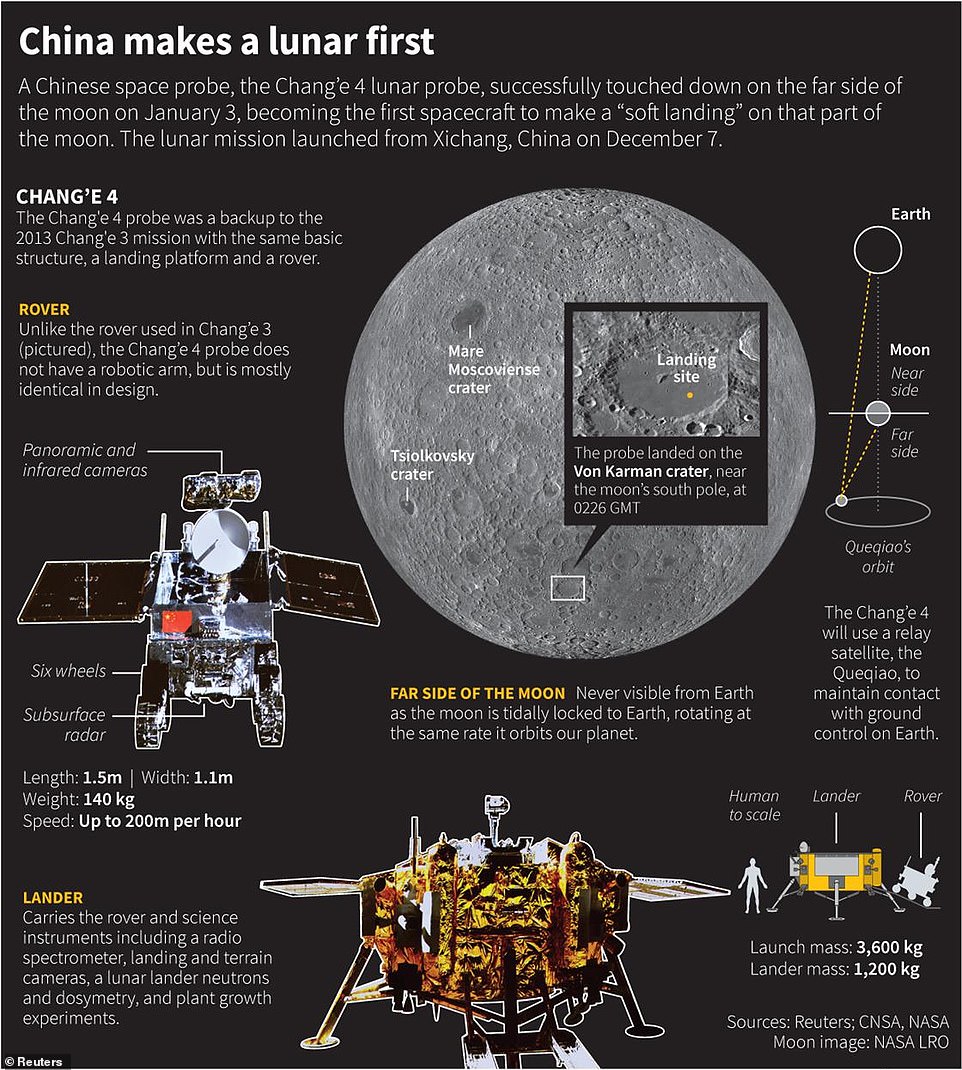 Jade Rabbit 2 – the direct translation for Yutu-2 – weighs 308lbs (139kg) and has six individually powered wheels so it can continue to operate even if one wheel fails. It rolled on to the lunar surface from the lander via two ramps  in January 2019 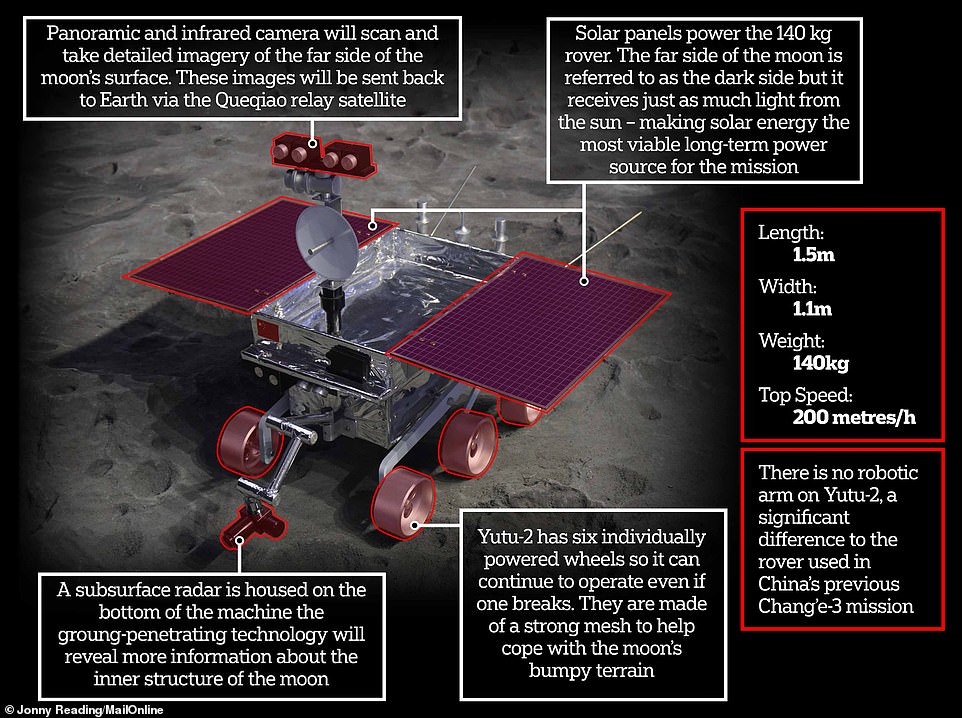 Yutu-2 has a host of instruments and is powered by solar panels. This includes a spectrometer which analyses the bizarre terrain on the far side of the moon 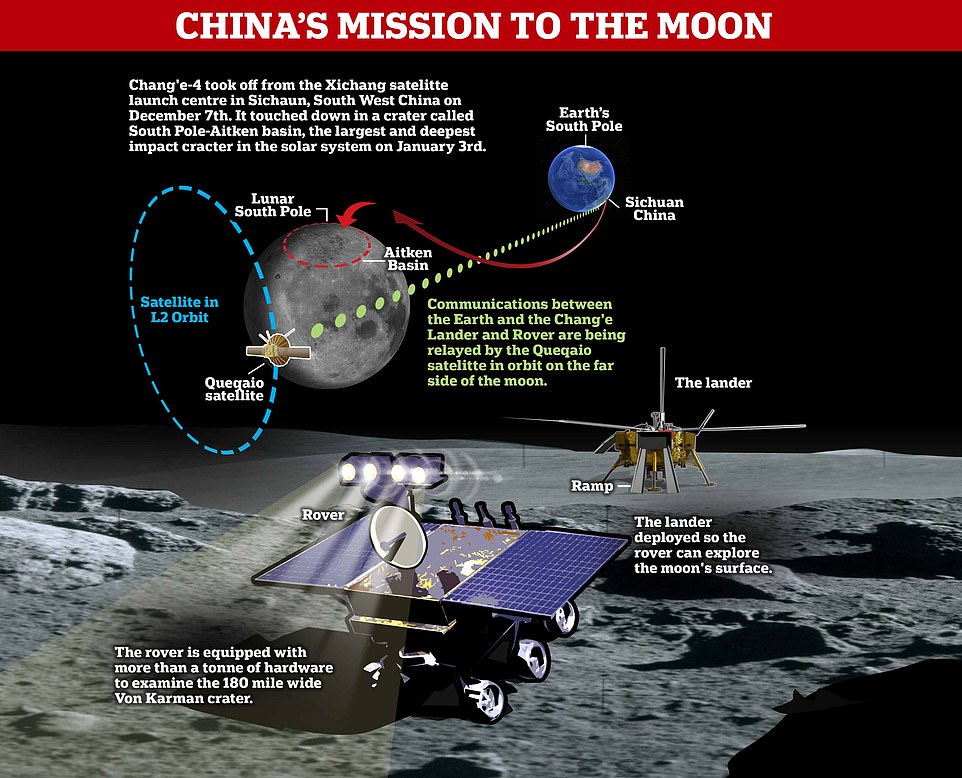 Recently, it was revealed how an on-board biosphere was used to grow a plant on the moon.

The capsule stood around 8 inches tall with a 6.5 inch diameter and had a rectangular seed bed that was loaded with cotton, potato, rape seeds, a variety of weed called Arabidopsis, and fruit fly eggs.

Arabidopsisis a plant used widely by scientists in experiments and is used ot model how many plants will respond to various stimuli.

WHAT DO THE NAMES OF CHINA’S MOON MISSION MEAN?

Chang’e is the moon goddess and wife of god Houyi in Ancient Chinese mythology.

Houyi is one of the most powerful mythological figures in China.

It is said that he shot down nine Suns to make Earth a liveable habitat for human beings.

The number four in the name is a more modern-day nod to the space programme.

This spacecraft is the fourth of the Chang’e missions.

Yutu (jade rabbit) is the companion of Chang’e in the mythological stories.

This is fittingly also the name of the rover on-board Chang’e-4.

Yutu-2 is so labelled because it is the successor to Yutu-1 which was deployed from the Chang’e-3 mission earlier this decade.

Queqiao is the relay satellite and translates to Magpie Bridge.

Queqiao, or the Magpie Bridge, is a legendary bridge which appears once a year to connect Niu Lang and Zhi Nv.

Niu Lang is a cattle herder on Earth while Zhi Nv, or the Weaving Maid, is a goddess in heaven.

The couple met and fell in love when Zhi Nv snuck to the ‘human world’ in secret to play. Their union enraged the chief goddess, Queen Mother of the West.

The couple got banished to live at different sides of the Milky Way.

Every year on the seventh day of the seventh month on the Lunar Calendar, thousands of magpies that are moved by the couples’ love story will form the Magpie Bridge, or Queqiao, so that Niu Lang and Zhi Nv can meet each other.

This relay satellite will allow communication between the moon probe and Earth.