China ‘rotates’ troops in Hong Kong ahead of planned…

China today sent fresh troops into Hong Kong in what it calls a routine rotation as the financial hub prepares for a new round of anti-government rallies at the weekend.

Soldiers across the land, air and naval forces were involved in the operation which took place in the wee hours, according to state broadcaster CCTV.

The military alternation came as the unrest in Hong Kong escalated last weekend. Demonstrators threw bricks and petrol bombs at police while officers fired tear gas and water cannon in two days of rallies, which resulted in more than 80 arrests.

It also comes after the organiser of a pro-democracy movement was attacked by mysterious men in baseball bats hours after he was denied permission to hold a march and rally on Saturday. 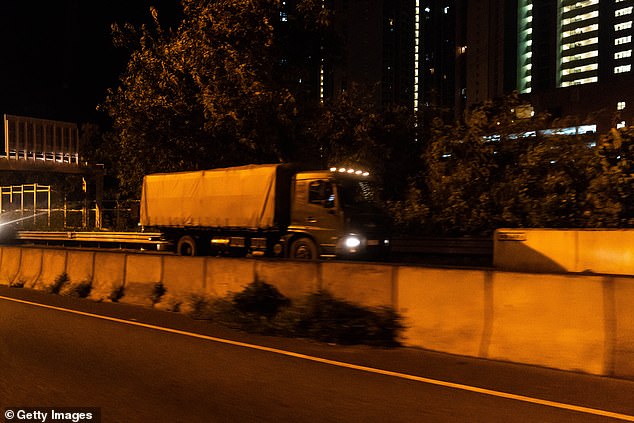 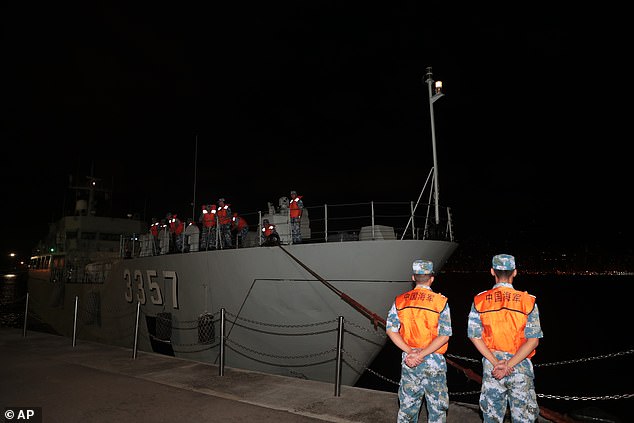 The action also came after the head of Beijing’s Public Security Bureau this week instructed police forces in Guangdong – the Chinese province bordering Hong Kong – to be ready to crack down on violent and terrorist activists ahead of the 70th anniversary of China on October 1.

A video published by CCTV shows a group of soldiers from the People’s Liberation Army (PLA) swearing their unwavering loyalty to Beijing in border city Shenzhen before jumping onto trucks to head to Hong Kong.

‘This mission is glorious. The responsibility is great. This task is arduous. It’s a real test for us,’ one commander yelled to the troop.

‘We will promote the Chinese spirit and resolutely complete the mission,’ the soldiers answered collectively. 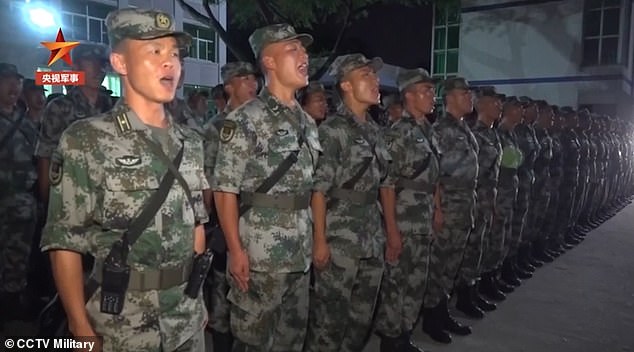 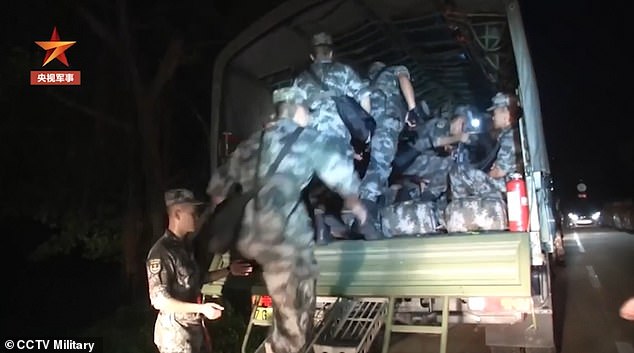 Soldiers across the land, air and naval forces in the PLA were involved in the operation 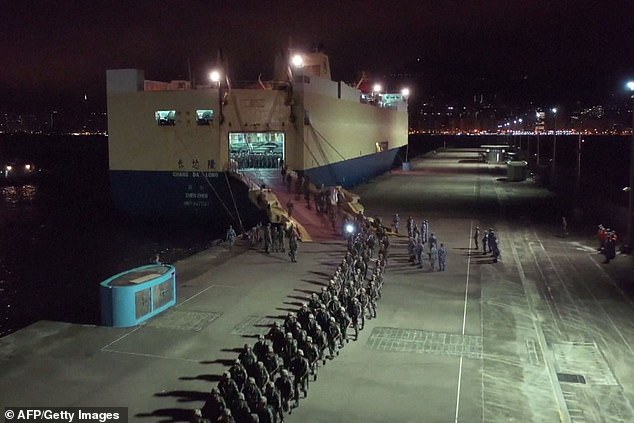 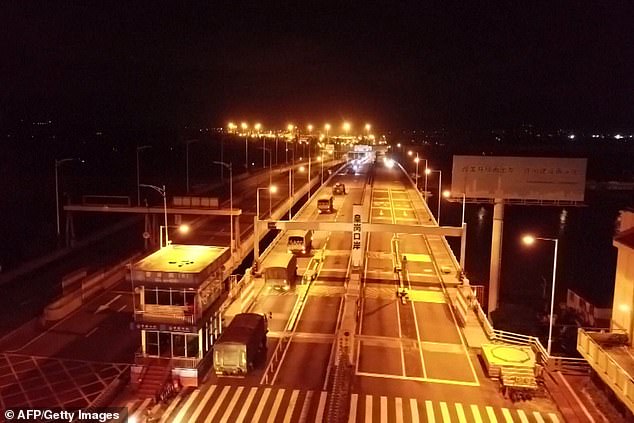 The troops entered Hong Kong through four ports of entry on land from Shenzhen as well as by sea and air, the report added.

The state news agency also said that the move is a routine annual rotation in line with the Law of the People’s Republic of China on Garrisoning the Hong Kong Special Administration Region.

The PLA has maintained a garrison in Hong Kong since the former British colony was returned to China in 1997, but its troops generally keep a low profile and are rarely seen in uniform in public.

In late June after Hong Kong was rocked by the first wave of protests, the PLA conducted a live-ammunition military exercise in the city in a show of military might. 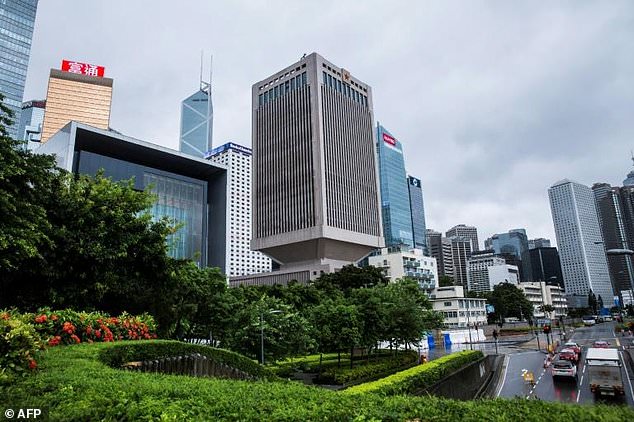 The PLA has maintained a garrison in Hong Kong since the former British colony was returned to China in 1997. This general view shows the PLA Forces Hong Kong Building 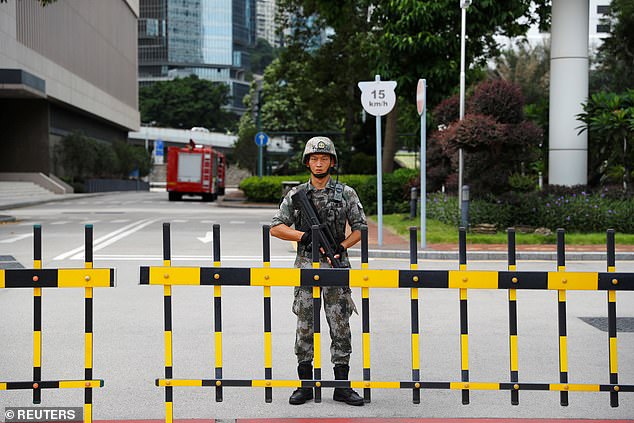 A new mass rally has been planned for Saturday in Hong Kong.

But the city’s police denied permission for the demonstration on security grounds, raising the likelihood of another weekend of clashes between police and protesters.

In a letter to the rally organisers the Civil Human Rights Front (CHRF) on Thursday, police said they feared some participants would commit ‘violent and destructive acts’.

The protests were ignited months ago when the city’s Beijing-backed government tried to pass a bill allowing extraditions to mainland China.

But they have evolved into a wider call for greater democracy and an investigation into allegations of police brutality. 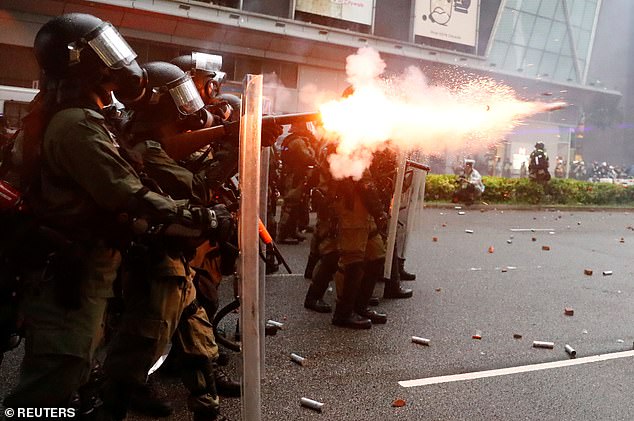 The Hong Kong government said on Monday that illegal violence was pushing Hong Kong to the brink of great danger after a weekend of clashes between protesters and police. A riot police is seen shooting a tear gas canister during a protest in Tsuen Wan on August 25 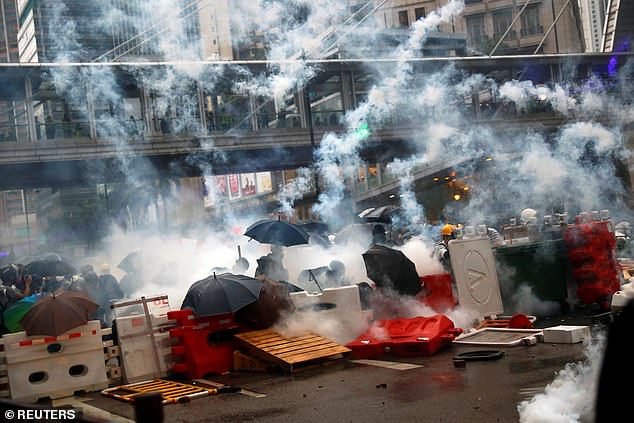 Hong Kong, a semi-autonomous Chinese territory, has seen more than two months of youth-led protests that have often ended in clashes with police. Pictured, demonstrators stand behind barricades, surrounded by tear gas, during a protest in Tsuen Wan on August 25 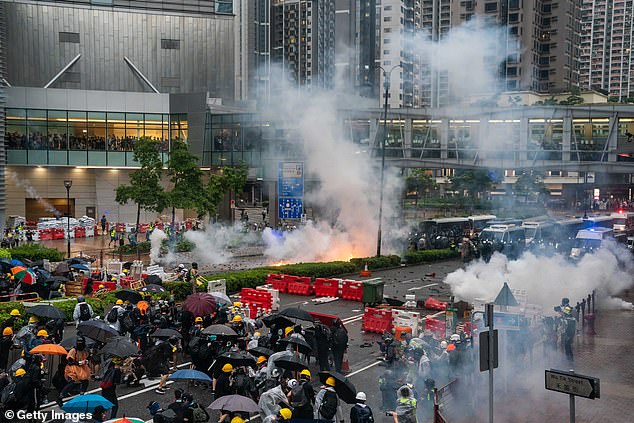 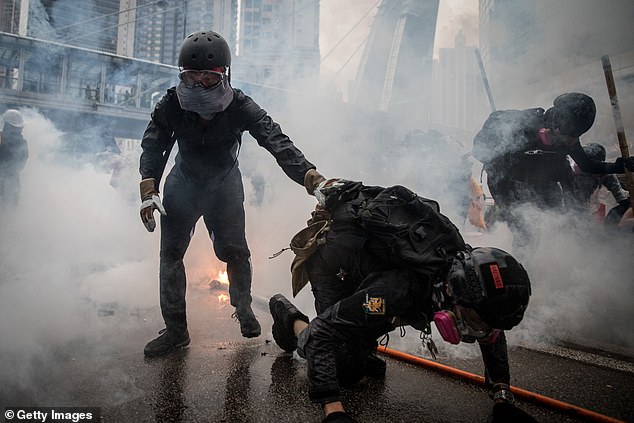 Police said on Monday that they were forced to fire water cannon and a warning shot to fend off ‘extremely violent’ demonstrators, marking some of the worst clashes the city has seen since June. Pictured, a protester assists a friend after police fired heavy tear gas on August 25

The mainly young protesters say their freedoms, unique within China, are being eroded by Beijing.

On Sunday, police deployed water cannon and fired a warning gunshot to fend off radical protesters after a sanctioned rally turned ugly, in some of the worst violence of the past three months.

This Saturday’s rally was set to mark five years since Beijing rejected political reforms in Hong Kong, a decision which sparked the 79-day Umbrella Movement.

The CHRF, responsible for the largest rallies the city has seen in decades, said they would appeal the decision.

‘You can see the police’s course of action is intensifying, and you can see (Hong Kong leader) Carrie Lam has in fact no intention to let Hong Kong return to peace,’ the group’s leader Jimmy Sham told reporters. 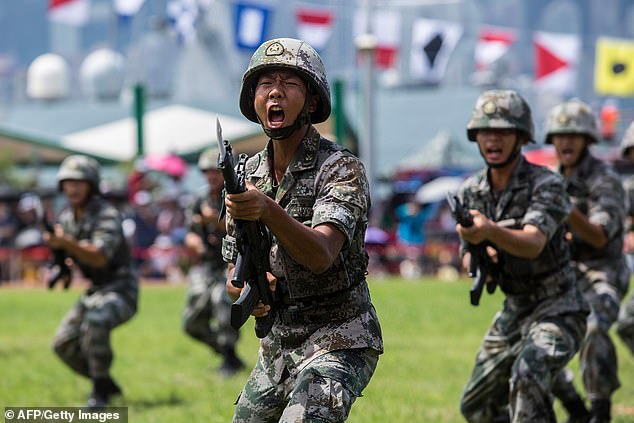 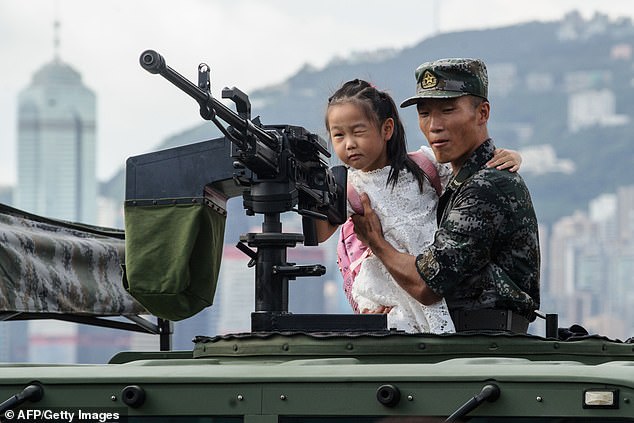 In late June after Hong Kong was rocked by the first wave of protests, the PLA conducted a live-ammunition military exercise in the city in a show of military might

Mr Sham said he was attacked as he ate lunch by two ‘masked men armed with a baseball bat and a long knife’, but escaped unhurt.

Anti-government demonstrators have been urged to gather in the city centre and march to the Liaison Office, the department that represents China’s central government in Hong Kong, but both aspects, which need permission from authorities, have been banned.

The last event organised by the CHRF on August 17 brought hundreds of thousands of people to the streets.

It was a deliberate show of peaceful protest that saw demonstrators disperse without clashes.

On that occasion, the initial rally in a Hong Kong park was approved by authorities but protesters later defied a ban to march through the city.

The unrest has shown no sign of abating, with protesters locked in a stalemate with the Hong Kong government, which has refused to give in to their demands.

More than 850 people have been arrested since June.