By Reuters and Tracy You For Mailonline

Canada’s National Post has released a picture (above) believed to be of Sarah McIver, the third Canadian detained in China

The third Canadian detained in China this month is being punished for working illegally in the country.

McIver’s detention came after two other Canadian citizens – former diplomat Michael Kovrig and businessman Michael Spavor – were detained earlier this month. Both Kovrig and Spavor are accused of endangering the state security by Beijing. 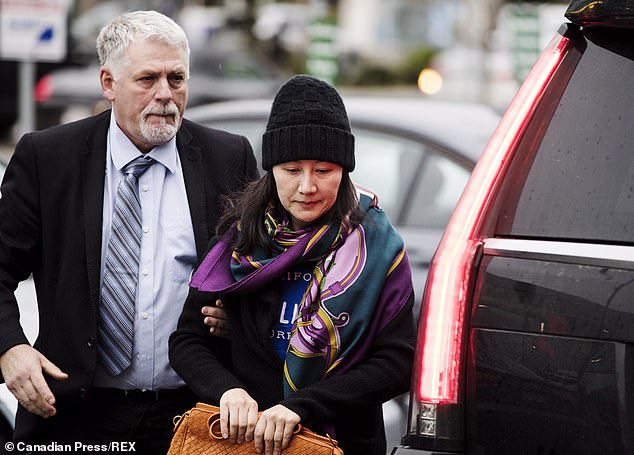 China has detained three Canadian citizens after Meng Wanzhou, the CFO of Huawei, was arrested in Vancouver under a U.S. warrant. Meng is pictured after being released on bail

The detentions of the Canadians followed the arrest of Meng Wanzhou, the chief financial officer of Chinese telecom giant Huawei, in Vancouver on December 1.

Meng, a 46-year-old Chinese national, is the daughter of Huawei’s billionaire founder Ren Zhengfei and one of the most powerful women in China.

She was arrested in Canada at the request of the United States – a move that has enraged Beijing while it is engaged in a trade war with Washington.

Commenting on McIver’s detention during a daily news briefing today, China’s Foreign Ministry spokeswoman Hua Chunying said: ‘What I can tell you is that China and Canada are maintaining clear consular communication.’

When asked if McIver’s case was connected to that of Kovrig and Spavor, Hua pointed out that the nature of the cases were different, given the other two were accused of endangering national security. 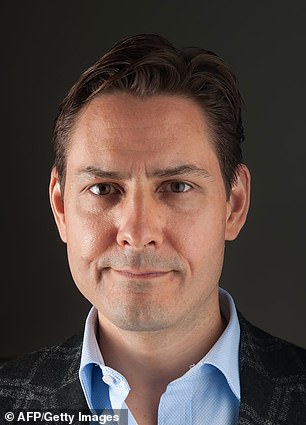 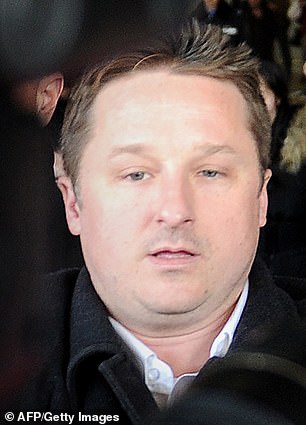 The first detainee, Michael Kovrig (left), is a former diplomat and now works for a NGO. The second detainee is Michael Spavor (right) who orgainses trips to North Korea from China

Hua referred further questions on McIver to the Ministry of Public Security, which did not immediately respond to requests for further comment.

The revelation could raise the stakes of the ongoing political tensions between China, Canada and the U.S. by pulling the EU – China’s largest trading partner – into the case.

Two of the sources said that the Hungarian embassy in Beijing had been seeking access to Kovrig too.

‘It’s not been granted yet,’ one of them said.

The second source said the Hungarian embassy in Beijing was treating it as a consular case and going through the ‘normal process’, also confirming consular access had not been granted.

Kovrig spent much of his 20s in Budapest, singing in a rock band, teaching English and writing for a city newspaper, a third source said.

McIver, said to be from the Canadian province of Alberta, is described by those who know her as ‘bubbly’ and ‘approachable’, according to National Post, which has also released a picture thought to be of McIver.

National Post’s article said McIver was expected to be returned before the New Year, quoting a source. The Canadian authority did not confirm a timeline to the news site.

Canadian Prime Minister Justin Trudeau yesterday urged caution and said he would not be ‘stomping on a table’ after China detained the third Canadian.

Trudeau said he was asking China for more information on the detentions.

He said the latest incident was ‘a very separate case’ from the previous two.

The Canadian government has said several times it saw no explicit link between the arrest of Meng, the daughter of Huawei’s founder, and the detentions of Kovrig and Spavor.

But Beijing-based Western diplomats and former Canadian diplomats have said they believed the detentions were a ‘tit-for-tat’ reprisal by China. 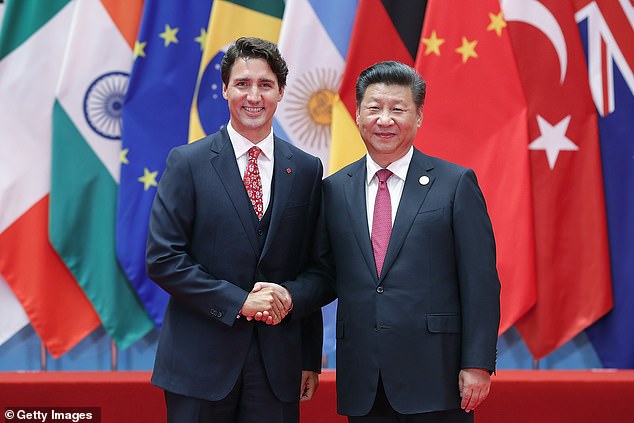 Canadian Prime Minister Justin Trudeau yesterday urged caution and said he would not be ‘stomping on a table’ after China detained the third Canadian. Trudeau is pictured shaking hands with China’s President Xi Jinping at the G20 Summit on September 4, 2016 in Hangzhou

China has demanded Meng’s immediate release and summoned in the Canadian and U.S. ambassadors to complain about the case.

Meng is accused by the United States of misleading multinational banks about Iran-linked transactions, putting the banks at risk of violating U.S. sanctions.

She was released on bail in Vancouver, where she owns two homes, while waiting to learn if she will be extradited to the United States.